EXPRESS INFORMER > News & Politics > Parents whose daughter stole their life savings of more than £130,000 say they have ‘forgiven’ her

Parents whose daughter was jailed for three years for stealing their life savings of more than £130,000 say they have ‘forgiven’ her and insist she is a ‘different person’ after spending time in prison

A couple whose daughter stole their life savings of more than £130,000 say they have ‘forgiven’ her and insist she is a ‘different person’ after spending time in prison.

Melissa Fordham, 36, from Colchester in Essex, maxed out her parents’ credit cards and cleared their bank accounts after they left for a trip around Europe in a motor home.

She was sentenced to three years in prison in November 2017 after admitting more than a dozen charges of fraud. theft and obtaining property by deception.

Her parents, Terence, 83, and Elizabeth Fordham, 73, today told the Clacton and Frinton Gazette that they have since forgiven their daughter for leaving them ‘living in misery.’

Mr Fordham said: ‘We have forgiven her and she is indebted to us in doing so.’

The couple say they witnessed a transformation in Ms Fordham’s character after she was moved from HMP Peterborough to East Sutton Park open prison in Maidstone, Kent.

Her father said: ‘She is a different person entirely. She has grown in stature, she’s much more confident than what she was. She’s happy.

‘We arranged a meeting at the open prison which was only supposed to last for an hour but it went on for two and a half hours.’

However, Mr Fordham said other family members have had trouble forgiving their daughter – who was entrusted with her parents’ finances after they left on their trip in March 2006.

‘It’s a pity they can’t accept what we’ve been through and how we’re trying to help her out,’ he added.

Ms Fordham stole at least £130,000 from her parents over the course of four years while the elderly couple travelled around Europe following their retirement.

She frittered away the cash and used five credit cards to run up the debt, with Chelmsford Crown Court previously told the trainee financial adviser had nothing to show for the spree. 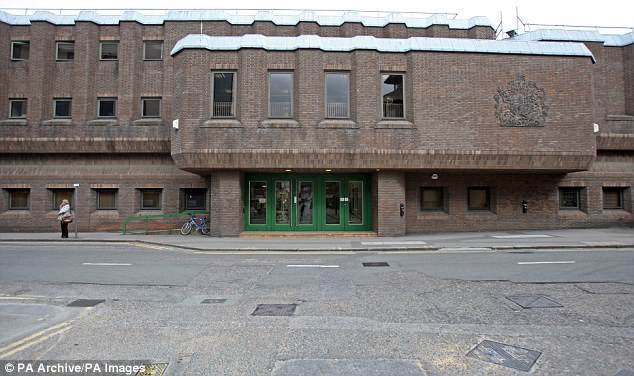 Ms Fordham frittered away the cash and used five credit cards to run up the debt, with Chelmsford Crown Court (pictured) previously told the trainee financial adviser had nothing to show for the spree

Ms Fordham, who works with a teaching company in London, recently told the Colchester Gazette she is ‘ever so thankful’ her parents were able to forgive her.

The wrongdoing was only discovered when Mr and Mrs Fordham tried withdrawing cash from their bank accounts whilst in Spain after Ms Fordham’s sister Gail visited.

They asked her to investigate when she returned home, and Ms Fordham didn’t produce any bank accounts claiming they had all been ‘shredded’.

It was only when she contacted the banks directly and saw the overdrawn accounts that Gail found out what had happened.

The couple had sold their home for £225,000 after retiring in March 2006 and bought a motor home in which to travel around Europe.

In a victim impact statement heard by the court in 2017, Mr Fordham said: ‘What has happened has been life changing for me, there’s not a day goes by without something triggering it and the emotions and memories come back to me.

‘I love my daughter Melissa to me she was my first born and the sun shone from her eyes. To this day I don’t understand why or how she could do this to us, she has let the whole family down.

‘As the enormity of it was revealed it was like the bottom of my world had fallen out.’