The parents of a young barista who was killed in a horror car smash have been left devastated after the tragic death of their only child.

Mum Julie Sheriff said she was ‘heartbroken’ after her daughter lost control of her new car on the Kwinana Freeway in Baldivis, south of Perth on Wednesday.

The 21-year-old was on her way to a friend’s house just before midnight when her Nissan X-Trail was clipped at the rear by a Nissan Maxima, which propelled her vehicle onto a bike path.

Abbey Sheriff, 21, was found dead at the scene, while a 28-year-old woman driving another vehicle was taken to hospital

Abbey, an avid footy player, was found dead at the scene, while a 28-year-old woman who was in the Maxima was taken to hospital.

Mrs Sheriff told Daily Mail Australia both were travelling northbound and claims the ‘other driver clipped the left rear back of [Abbey’s] car’ as she came off the off ramp – while Abbey was on the freeway.

The grief-stricken mother said she was ‘devastated’ when she realised her only daughter had been killed.

‘I was shocked and my heart was broken,’ Mrs Sheriff said.

‘Abbey means the world to me, she was my life, my best friend and my baby girl, I can’t live this life without her.’

Her father Darren Sheriff told 7News his daughter was taken from the family too soon.

Julie Sheriff said through tears that Abbey ‘made me a mum’. ‘She’s my world, she’s my only child,’ she added as she cried alongside her husband (pictured, devastated parents Darren and Julie Sheriff) 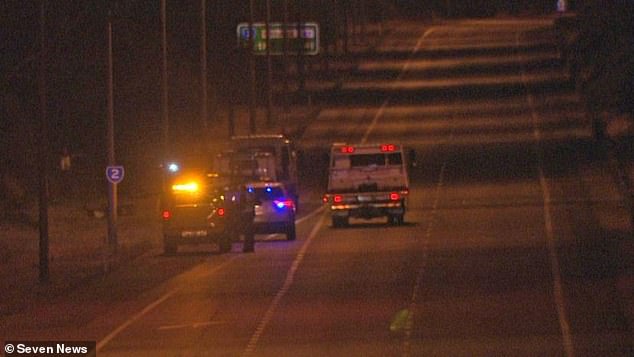 ‘For her to be taken so early, 21 is just too young,’ the dad said. ‘She should be burying us, not the other way around.’

Paramedics at the scene of the crash were forced to wait for firefighters to arrive as the crew had to extract Ms Sheriff from the crumpled car.

Ms Sheriff had just bought the vehicle last month as an early Christmas present for herself, posting about it to social media: ‘Here’s to new beginnings’.

Mr Sheriff said his daughter drove the same road every day to work as he tried to make sense of the accident.

‘She was so proud of her car when she first got it,’ he added. 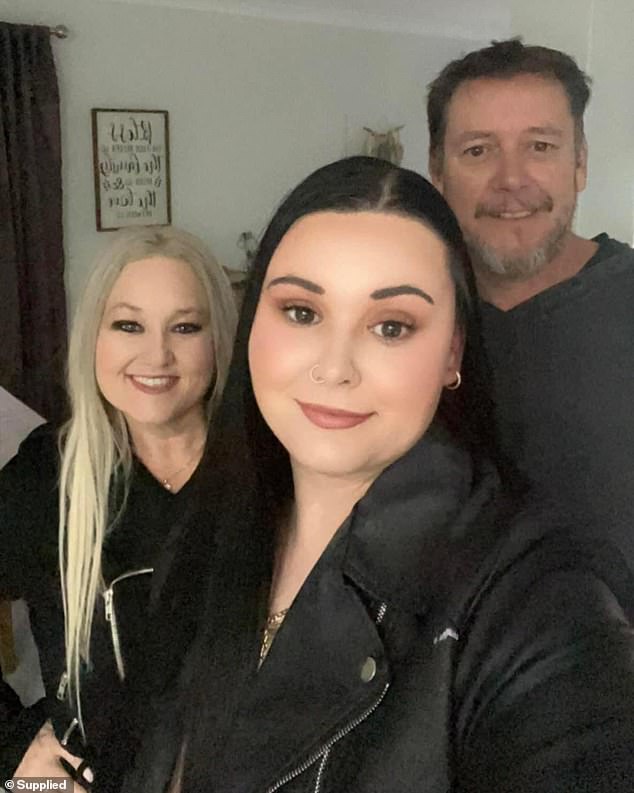 Mrs Sheriff said she was ‘heartbroken’ after her daughter, Abbey died when she lost control of her new car on the Kwinana Freeway in Baldivis, south of Perth on Wednesday (pictured, the mum, dad and daughter together)

Mrs Sheriff said she knew something was wrong when Abbey didn’t text her about arriving safely at her friend’s home.

So the couple took to the streets and followed the young girl’s route before they came across emergency services on the freeway.

The distressed parents were forced to wait three hours before they got the terrible news of Abbey’s death, while not being allowed to approach her vehicle.

Emergency crews worked for several hours to clear the scene.

Witness Deacon Tremain, 21, said he saw the boot had been torn off the car after he pulled over to see the X-Trail on the bike track.

‘I couldn’t see anyone in the car at all,’ he told the West Australian. 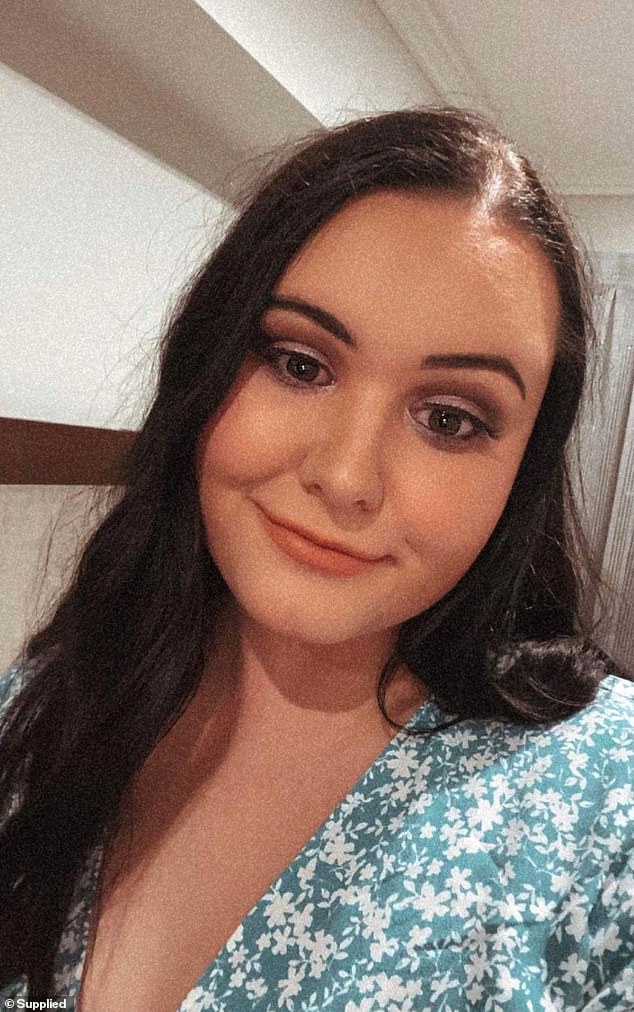 Abbey’s football club the Mandurah Mustangs posted moving tributes to the junior player on Friday. ‘She played a pivotal role in our inaugural women’s team, she was adored by everyone, a gentle, kind and caring soul, and a beautiful, vibrant, smiling exterior,’ it said

She told Daily Mail Australia she and her husband may find some comfort after they get to touch and hold their daughter.

‘We only identified our daughter yesterday and we couldn’t hold her or kiss her, we could only see her through the glass windows,’ Mrs Sheriff said.

Mrs Sheriff told Nine News through tears that Abbey ‘made me a mum’.

‘She couldn’t have been any more perfect — her nature, how she went about life, she was so giving,’ the mum said.

‘I’m never going to heal from this — I’ll never be the same.’

Officers from the Major Crash Investigation Unit are investigating the fatal crash and are urging witnesses or anyone with dashcam footage of the accident to come forward.

Police said no one has been charged or arrested over the fatal crash.

Floral tributes and cards have been left at the scene with several bouquets left by mourners in honour of Abbey. 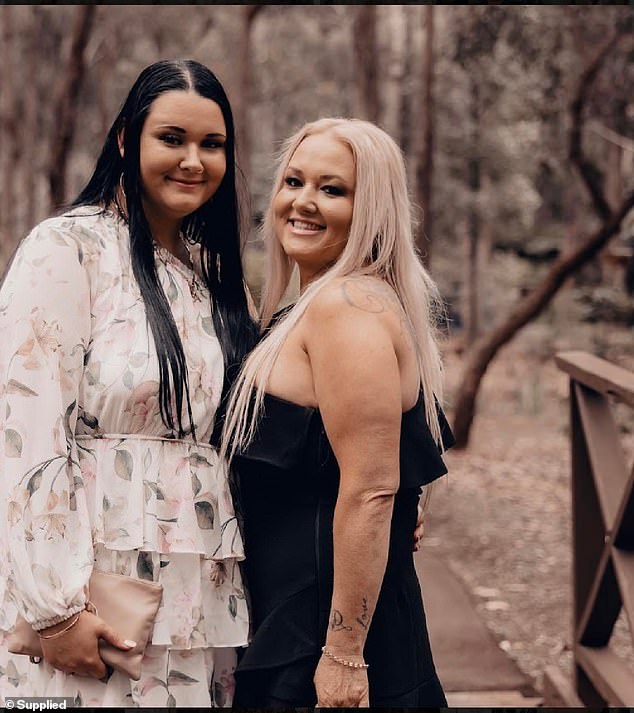 ‘I’m never going to heal from this — I’ll never be the same,’ Mrs Sheriff (pictured right with her daughter Abbey) said

Her football club the Mandurah Mustangs posted moving tributes to the junior player on Friday.

‘She played a pivotal role in our inaugural women’s team, she was adored by everyone, a gentle, kind and caring soul, and a beautiful, vibrant, smiling exterior,’ it said.

‘But don’t be fooled, she could rough up the big guns on the footy field. Rest easy up there kiddo, fly high.’

A GoFundMe page was set up to cover funeral costs for the young woman and had passed $10,000 by Saturday.

‘[We hope to] create a beautiful send off for our baby girl, Abbey Rose,’ her father wrote on the page.