The parents of the youngest person killed in the Manchester Arena terror attack have called for transparency as the public inquiry into the bombing begins on Monday.

Eight-year-old Saffie Roussos was one of 22 victims killed by suicide bomber Salman Abedi at the end of an Ariana Grande concert in May 2017.

Abedi also died in the blast and, three weeks ago, his brother Hashem Abedi was given a minimum jail term of 55 years in prison after a jury found he was guilty of helping Salman build the bomb.

The public inquiry, which will investigate events before, during and after the attack, will be held in a specially converted room in the Manchester and Salford Magistrates’ Court building.

Andrew and Lisa Roussos have expressed concern about transparency at the inquiry, parts of which will be held in private, after their daughter Saffie, pictured with Lisa, was killed in attack

It will analyse what the security services knew of the Salman and Hashem Abedi and whether the attack could have been prevented.

Some parts of the inquiry will take place in private due to national security reasons.

Abedi was known to the security services, and an anonymous senior MI5 officer is expected to give evidence to the inquiry later this year.

Saffie’s parents Andrew and Lisa Roussos have expressed concern about transparency at the inquiry, calling for answers about how the aftermath of the attack was handled.

Mr Roussos told the BBC: ‘All I hear is lessons learned, but lessons haven’t been learned, and lessons will never be learned, unless we get that transparency and honesty from the people involved to get the answers that we need.’

Mr Roussos suggested that a barrister from each of the six firms representing the bereaved families be allowed to remain in the hearing.

Mrs Roussos added: ‘Obviously you’re having to put your full trust in the (inquiry) chairman.

‘But this inquiry is not about trust, it should be about transparency, and I feel that we won’t get that without having a representative in the room.’

Mrs Roussos was in the arena with her daughter during the attack and was temporarily paralysed due to her injuries. 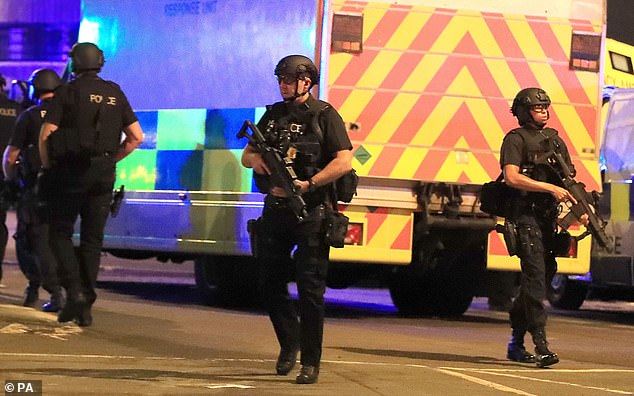 She told the broadcaster: ‘The worst thing for me was, is, if Saffie could have been saved.

‘To think that, not just Saffie, the other people. How could they leave injured people in the arena for hours? It’s just madness.

‘I remember lying there thinking help will be here soon, and in the end it felt like I was lying there for hours.’

The inquiry’s website said the scope would focus on determining ‘exactly what happened’ and then on working out ‘what must be done to prevent it from happening again’.

Public inquiries cannot determine criminal or civil liability, but do have the capacity to highlight where failings have occurred.

Earlier this year, more than 50 survivors applied to be given ‘core participant’ status which would have allowed them to obtain disclosure of evidence in advance, challenge evidence and participate in lines of inquiry.

They want to be able to ask questions at the public inquiry which is due to examine the intelligence background and the emergency response on the day.

However, Sir John Saunders, who will chair the public inquiry, ruled they would not be given this status, a decision that was upheld on appeal two months later.