Two parents have been crushed to death alongside their seven-month-old boy and pet dog after a cliff collapsed onto them on a Brazilian beach.

Hugo Pereira, 32, died with his partner, Stella Souza, 33. She was found under the rubble hugging her baby as she attempted to protect the child from the boulders.

The boy was rescued alive but died shortly after from his injuries.

Witnesses said the family were sitting near the base of the cliff on Pipa beach in the northern state of Rio Grande do Norte on Tuesday when rocks collapsed on top of them.

The family’s dog, called Brisa, also died in the accident.

Hugo Pereira, 32, died with his partner, Stella Souza, 33. She was found under the rubble hugging her baby as she attempted to protect the child from the boulders (the family pictured together in an undated photo) 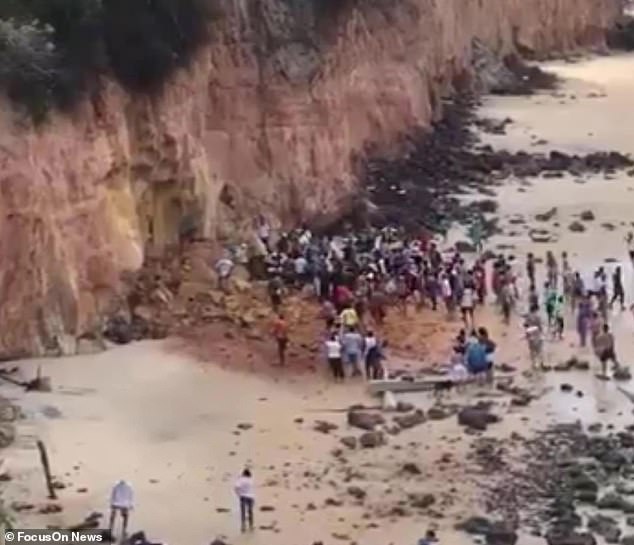 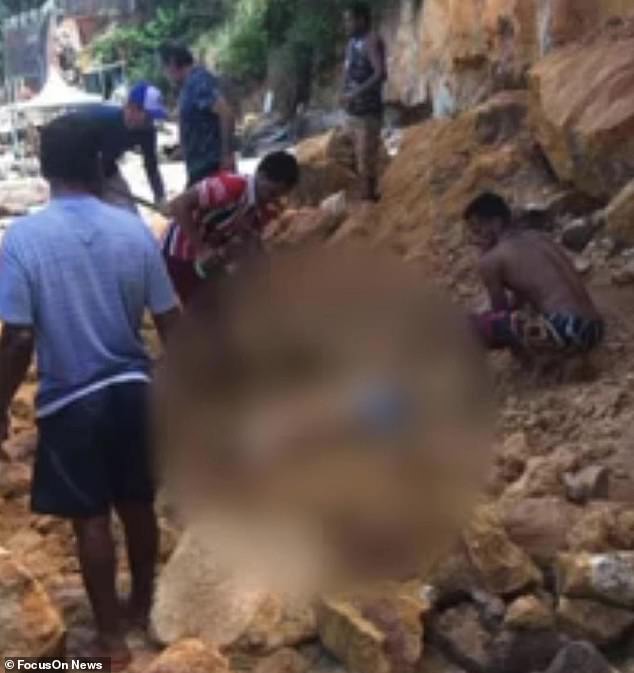 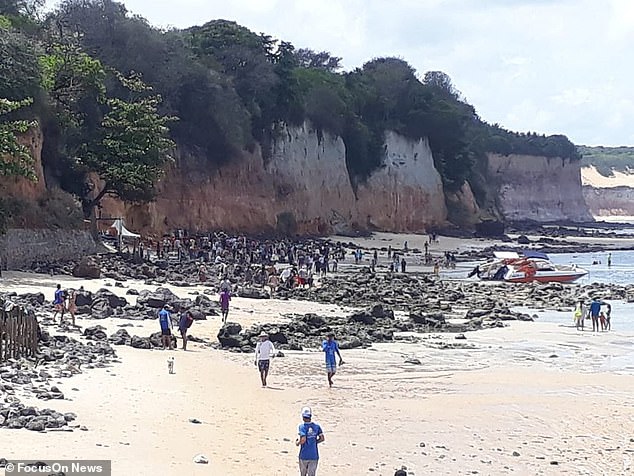 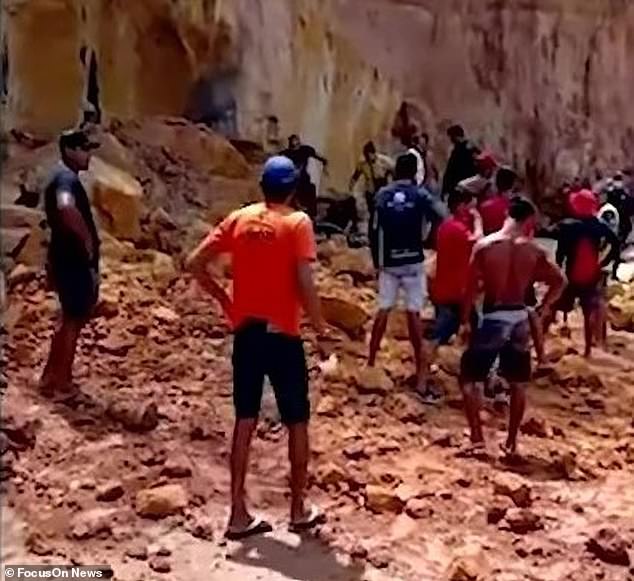 Bystanders at the scene on Tuesday, by the time the rescuers arrived the family had died

Local resident, Igor Caetano, who witnessed the tragedy and tried to help the victims, told G1: ‘We dug until we found the father, and then we found the mother and child. She was hugging (the baby).

‘It appears she instinctively tried to protect her son. The adults’ injuries were very severe because they took the brunt of the collapse.

He said the little boy was still breathing when he was found.

‘A doctor happened to be passing just as the accident happened and she tried to revive the child. But he couldn’t be saved,’ Mr Caetano, a nautical engineer, said.

Videos taken moments after the incident shows dozens of people on the beach digging with their hands and using wooden sticks to try to rescue the victims.

João Marinho, Ms Souza’s cousin, said the family were dead by the time rescuers arrived on the scene.

The fisherman said: ‘I’m born and raised here and this has always happened because the sea is gradually destroying the cliff more and more. 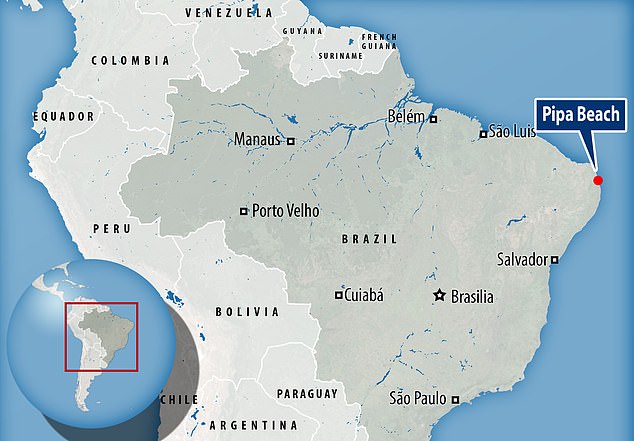 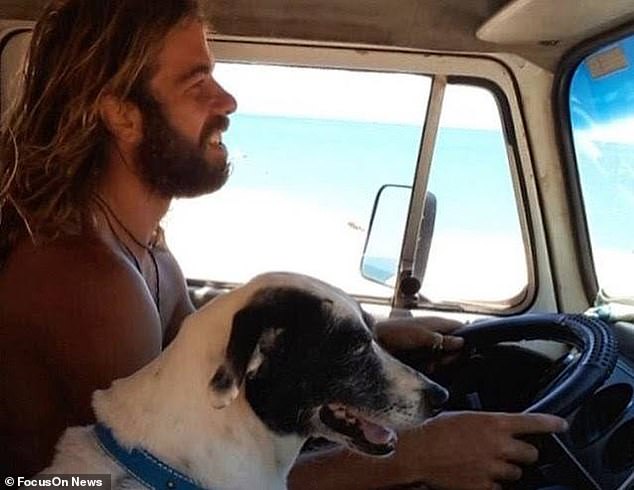 Witnesses shocked by the tragic loss of life said Mr Pereira, was well known to residents because he had settled down in the area to start a family and worked as a hotel manager close to the beach (pictured with his dog) 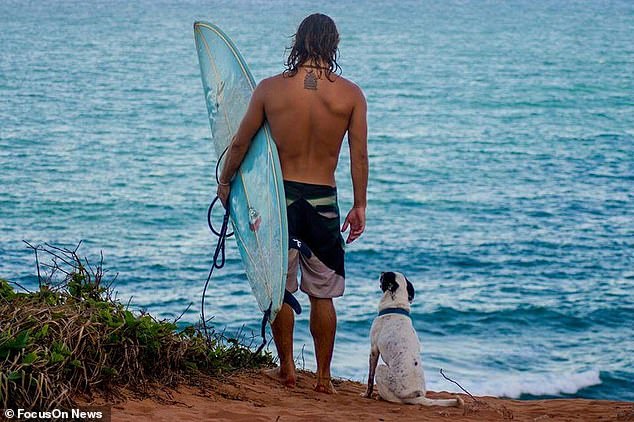 Mr Pereira enjoying the waves with the family dog Brisa

‘When we see tourists sitting in the shadow of the cliffs we warn them to leave because we know about the risk.’

Signs placed near the base of the cliff warning of the dangers of landslides are constantly washed away by high tide, council officials said.

Communications officer for Tibau do Sul city, Fábio Pinheiro said: ‘As the tides fill and hit the cliff, its base is being eroded, which makes the upper part more vulnerable to collapse. It is not uncommon for part of the rock wall to come loose.’

Parts of the cliff are more than 196ft high.

He reported that a beach patrol crew had passed the location earlier and had apparently seen the couple and warned them to move their location. 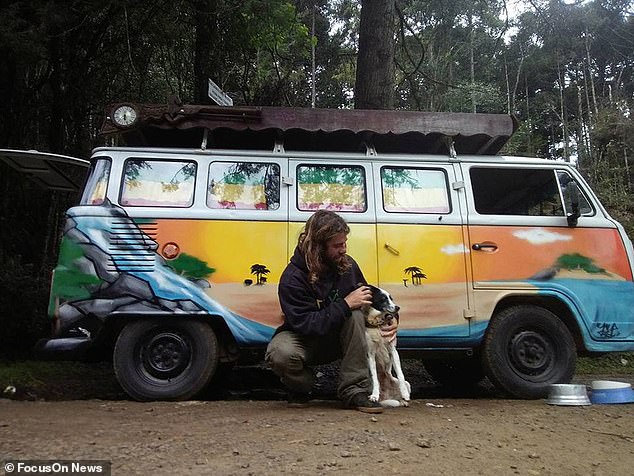 Mr Pereira with his dog Brisa 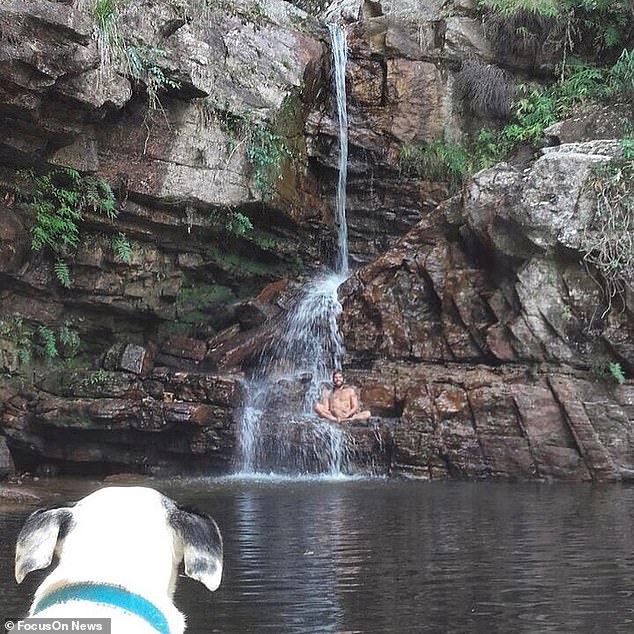 Mr Pereira sitting beneath a waterfall watched by his dog 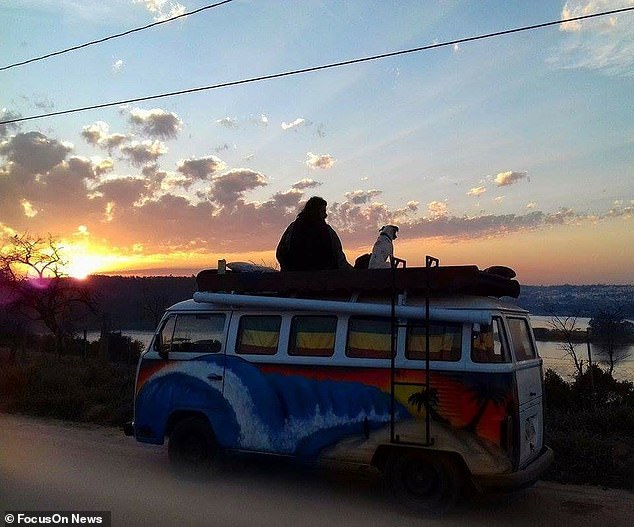 Mr Pereira sitting on a camper van with his dog

Witnesses shocked by the tragic loss of life said Mr Pereira, was well known to residents because he had settled down in the area to start a family and worked as a hotel manager close to the beach.

Prior to putting down roots, the father of one had spent 2017 travelling the country in a camper van with his pet dog.

On twitter, Minister of Tourism, Marcelo Álvaro Antônio, lamented the accident and expressed his condolences to relatives and friends of the victims.