Parents will ‘always’ be asked for consent before their children receive the Covid vaccine, the schools minister has said.

Nick Gibb sought to reassure families amid reports that children as young as 12 will be able to overrule their parents as part of a secondary-school jabs rollout.

But he failed to clarify what would happen in the event a parent refused to let their child have the jab.

Medics today said they feared there could be an awkward tension if they are asked to vaccinate children against their families’ wishes.

Mr Gibb told the Education Select Committee: ‘The consent from parents will always be sought before the child is vaccinated in the school.

‘(But) in some circumstances, and it is rare, children can consent themselves if they are competent to do so. The people administering vaccines in schools are aware of these sensitive issues.’

Professor Chris Whitty and the other chief medical officers are currently weighing up whether to offer jabs to 12 to 15-year-olds, after the Government’s vaccine advisers said the vaccines only offered a marginal benefit to their health.

Professor Whitty — who said over summer he would be in favour of jabbing kids to prevent more school closures — is expected to OK the move on Friday.

Ministers have made no secret of the fact they want to inoculate the age group, with the NHS ordered to have plans ready to roll out the doses from last week.

If approved, children are expected to be offered either the Pfizer or Moderena jabs in schools.

Scientists are divided over whether 12 to 15-year-olds should get the Covid vaccine, with some SAGE members backing the move yesterday arguing it would help to head off a surge in infections later this winter.

But others have argued it would be ethically dubious to inoculate the age group when millions of people in poorer countries are still waiting to be vaccinated.

A SAGE adviser today warned it was already too late to jab children because they should have been inoculated over the summer. 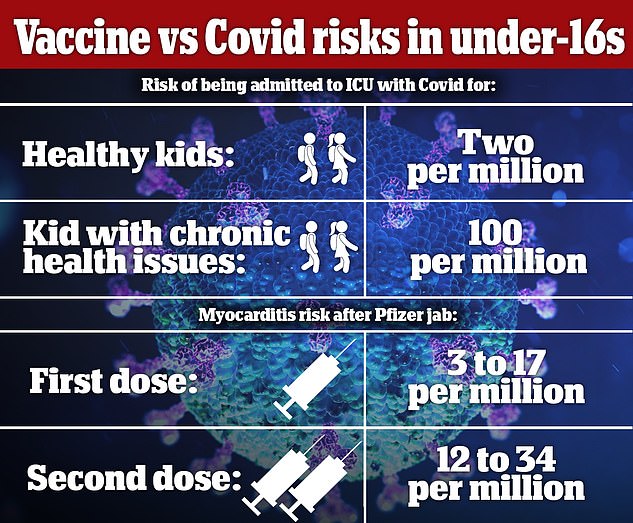 The JCVI said that youngsters under 16 with severe conditions have a one in 10,000 chance of falling seriously ill with Covid compared to the one in 500,000 risk for healthy children. It said that a very rare heart complication associated with the jabs meant the benefits of vaccination ‘only marginally’ outweighed the risks in healthy under-16s, but not enough to recommend a mass rollout 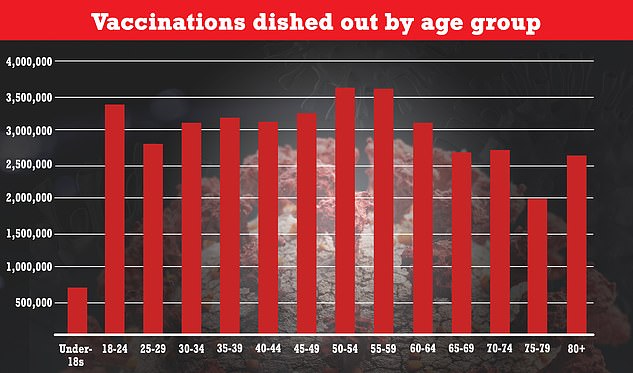 This chart shows vaccinations by age group in England. In the under-18s age group the Covid vaccine is already recommended for 16 and 17-year-olds, and half have already got one dose 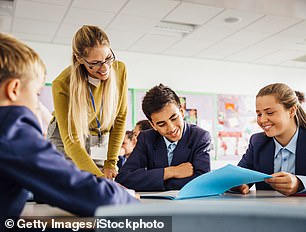 Mr Gibb said that, if approved, the vaccines would be rolled out to children in schools.

He told MPs: ‘Yes that is the intention, that the School Age Immunisation Service will deliver these vaccinations through the schools.

Mr Gibb also signalled his support for ditching school bubbles, which had led to thousands of children being sent hom last year despite testing negative for the virus.

A SAGE adviser today suggested that teenagers should have been vaccinated over the summer holidays.

Professor John Edmunds, who is also an epidemiologist at the London School of Hygiene and Tropical Medicine, warned that jabbing teenagers now would not have ‘much effect’ on suppressing a winter wave.

He told The Times: ‘Even if we started [vaccinating all teenagers] immediately it’s not going to have much of an impact on the epidemiology in the next couple of months.

‘[This is] because they will only get a single dose and one dose is not terribly effective at preventing infection with the Delta variant.

‘The biggest lever we could have pressed was to have vaccinated schoolchildren but we should have done it before they went back to school.

‘In the last six weeks, we haven’t really taken any action to prevent things taking off in the autumn, and that’s a shame.’

Experts fear England, Wales and Northern Ireland will be hit by surging cases in the coming days after schools returned from the summer holidays.

In Scotland — where children went back in mid-August — infections have already spiked to their highest levels since the pandemic began.

He said: ‘There’s no real reason for schools to maintain the bubble arrangements.

‘It’s not the advice that we are giving to schools and we have regional schools commissioners in all our regions and they will be talking to schools.’

His comments add to confusion over whether children will be able to overrule their parents to get the vaccine.

Vaccines minister Nadhim Zahawi said on Sunday that 12 to 15-year-olds would be able to get the jab against their parents wishes.

He said: ‘What you essentially do is make sure that the clinicians discuss this with the parents, with the teenager, and if they are then deemed to be able to make a decision that is competent, then that decision will go in the favour of what the teenager decides to do.’

Mr Zahawi added that if jabbing 12 to 15-year-olds was recommended by Britain’s medical officers it was ‘absolutely’ the right thing to do.

And Dr David Strain, a British Medical Association chief, also called for them to be able to overrule their parents to get the jab.

Dr Strain, who is also clinical lead for Covid services at the Royal Devon & Exeter NHS Foundation Trust, told LBC Radio: ‘A lot of children aged 12 have enough maturity in order to make a decision themselves, although it’s not the same for every child.

‘Doctors and nurses are trained to be able to evaluate them and deem them competent.’

But experts warn clinicians may be ‘reluctant’ to give children jabs without parental consent because the Joint Committee on Vaccinations and Immunisations (JCVI) has not recommended them for the age group.

The associate professor of family law at Oxford University, Lucinda Ferguson, told The Telegraph yesterday: ‘In my view the clinician may well be reluctant to accept that because alongside that, you have now got the JCVI saying that they don’t consider it to be essentially in the medical best interests of children more generally.

She added: ‘At least at this stage wold be reluctant to accept that that consent (from a child) is good enough because of course if you treat a child without informed consent, either from them, or from a parent with parental responsibility, it is technically battery and that would be what would be concerning the clinician.’ 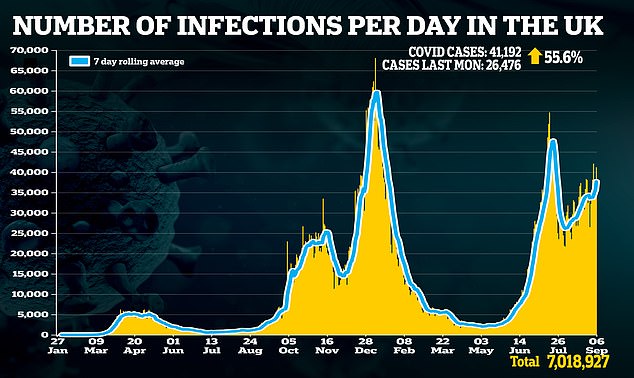 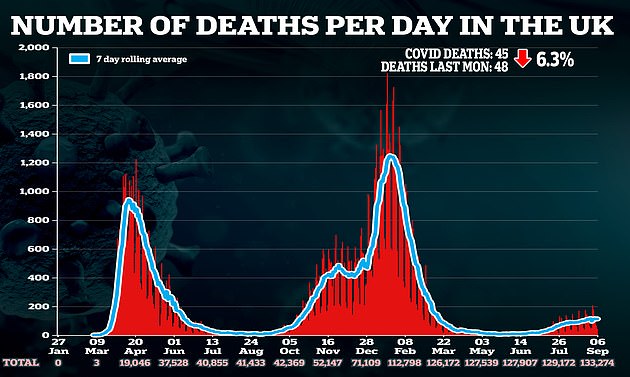 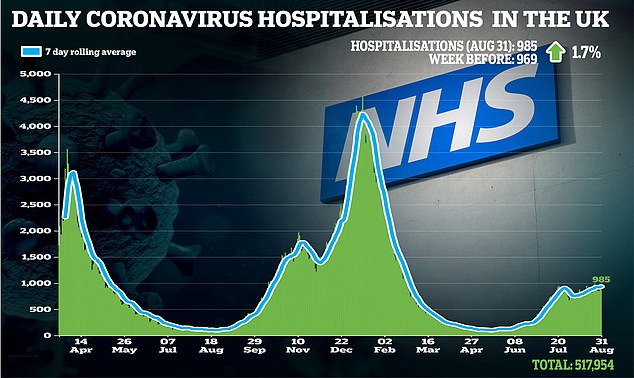 Daily hospitalisations are still nowhere near the levels of previous waves and patients are being admitted with milder disease than earlier phases. But there are still concerns that Britain is starting from a high baseline as it heads into winter 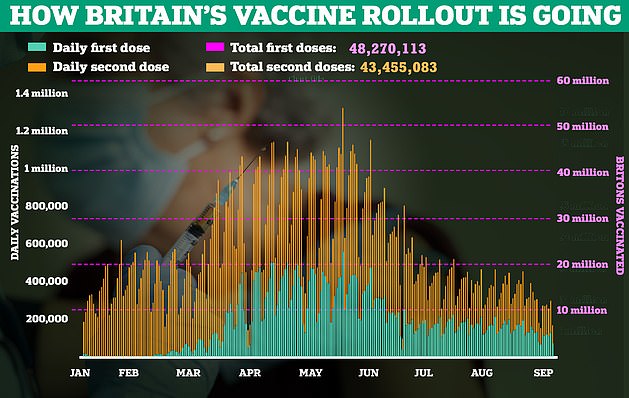 ‘Professor Lockdown’ told a live conference yesterday that a decision from Professor Whitty and the other chief medical officers was expected by Friday.

Several SAGE members have already said they are in favour of vaccinating the age group to keep infections at bay in schools.

Professor John Edmunds, who is an epidemiologist at the London School of Hygiene and Tropical Medicine, said that children should have been jabbed over the summer holidays.

He told The Times: ‘Even if we started (vaccinating all teenagers) immediately it’s not going to have much of an impact on the epidemiology in the next couple of months because they will only get a single dose and one dose isn’t terribly effective at preventing infection with the Delta variant.

‘The biggest lever we could have pressed was to have vaccinated schoolchildren but we should have done it before they went back to school.

‘In the last six weeks we haven’t really taken any action to prevent things taking off in the autumn, and that’s a shame.’

As children return to class, schools in England no longer have to keep pupils in year group ‘bubbles’ to reduce mixing, and face coverings are no longer advised.

Children do not have to isolate if they come into contact with a positive case of Covid. Instead, they will need to get a PCR test and isolate only if positive.