Alicia Silverstone has come under fire from a parenting expert who claimed her overly attached parenting style can lead to ‘boundary issues,’ and that Silverstone should have stopped sharing a bed with her son when as ‘early as five years of age.’

The 45-year-old San Francisco native opened up about her close relationship with her only child during an interview on The Ellen Fisher Podcast, during which she claimed that she is simply ‘following nature’ by sleeping alongside her tween son, who she shares with ex-husband Christopher Jarecki, whom she split from in 2018.

And although Silverstone claims that her parenting style to be that of a ‘loving mama,’ many experts have disagreed.

Parenting expert and psychologist Reena B. Patel criticized Silverstone’s parenting styles, specifically, her co-sleeping with her son, adding that Bear is much past the age where it’s considered acceptable to continue to share a bed.

‘When a child begins to question the difference in genders, hits puberty and or starts to show discomfort is when to stop. It can be as early as five years of age,’ Patel told DailyMail.com.

Alicia Silverstone, 45, opened up about motherhood and about how she raises her 11-year-old son Bear, who she shares with her ex-husband Christopher Jarecki 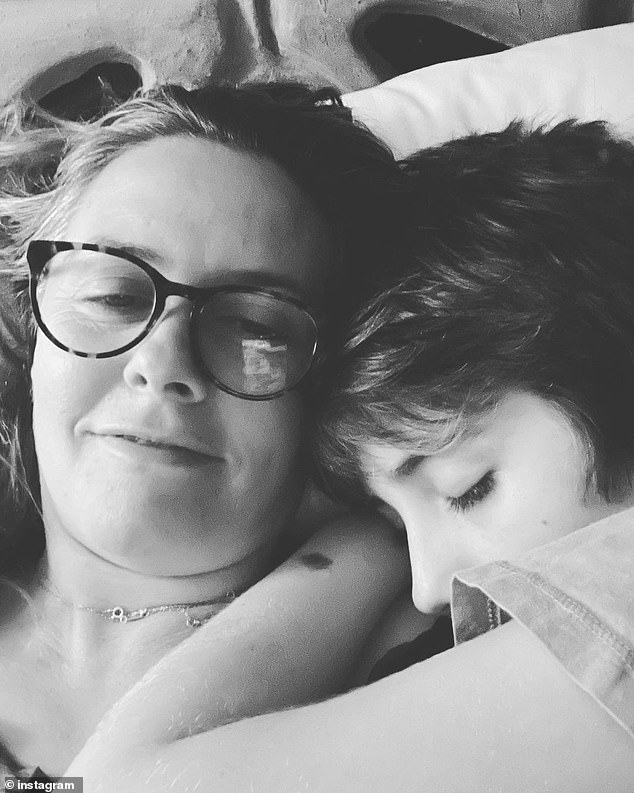 The mother-of-one (seen in 2020) said that she still sleeps with her tween son, claiming that she is simply ‘following nature’ by sharing a bed with him and experts have criticized her 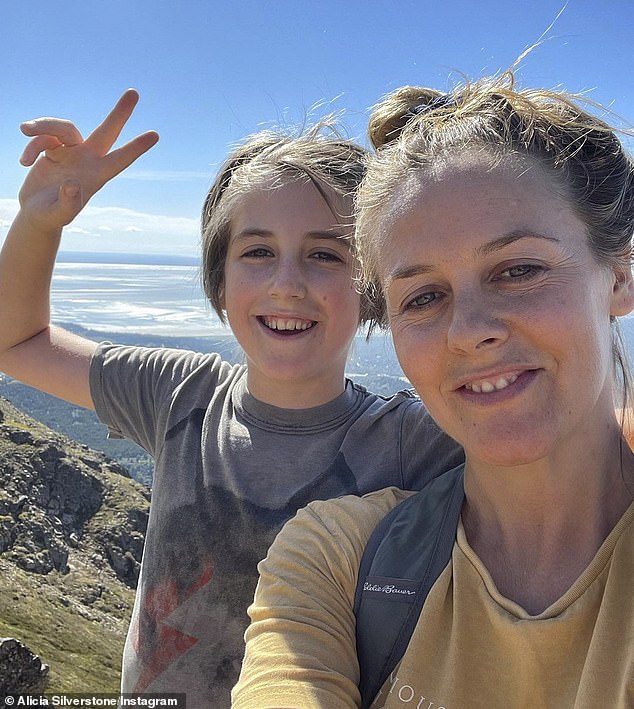 Is ‘attachment parenting’ healthy? Inside the controversial practice followed by Silverstone

The practice of attachment parenting focuses on eight ‘principles’, which begin while a woman is still pregnant with her child.

Attachment parenting is intended to ensure an incredibly close bond between a child and their parent through practices like breastfeeding, co-sleeping, joint bathing, and natural childbirth.

While some insist that the technique nurtures a healthier, happier relationship between parent and child, critics have warned that attachment parenting can cause children to be overdependent, while increasing the stress placed on their parents.

Parenting expert Reena B Patel noted that ‘when a child is a toddler,’ they should begin sleeping independently.

Co-sleeping has also been called out as one of the more potentially-dangerous aspects of the practice, with critics warning that bed-sharing with a baby can increase the risk of sudden infant death syndrome (SIDS).

The parenting expert added that prolonged attachment style parenting can lead to a reduced amount of ‘exploration freedom a child receives, can create co-dependence, may limit independent skill development and can lead to challenges in other relationships. ‘

She added that ‘when a child is a toddler,’ they should begin sleeping independently.

‘It’s important to clarify how one would sleep when at other houses and how to rewind and provide affection to others when at school and visiting extended family, or when mom isn’t around to bond with,’ the psychologist said.

Patel noted that a prolonged attachment parenting style can also cause ‘boundary issues.’

She added that Silverstone’s overly attached parenting style would more than likely cause issues for Bear in the future and added: ‘It can [lead to bullying and] social effectiveness should be considered and at that age.’

The parenting expert continued by noting that Bear should ‘try to sleep independently.’

‘As they get older there are sleepovers and camps. What would happen in those situations. When a child gets ready to move out or go to college.’

Silverstone has been known for her ‘alternative’ ways of parenting, in her 2014 book, The Kind Mama, the Clueless alum compared letting her baby sleep in a crib to ‘child neglect,’ and in 2020 said her and Bear often wake up and ‘snuggle for two or three hours’ before she bathes alongside him.

She added that her way of parenting was ‘loving’ and focused on genuine communication and cuts out things like TV from her home.

Silverstone then joked that she would ‘be in trouble’ with mom-shamers, but added that at this point in her life ‘I don’t really care.’

Clinical psychologist and best-seller of three parenting books Dr. Laura Markham said on her parenting blog Aha! Parenting that attachment parenting is beneficial up to a certain extent, but when children began tor grow overly attached parents need to learn how to take a ‘hands off’ approach.

Dr. Markham added that although toddlers have a ‘fierce need for connection with their parents,’ they need be allowed to ‘explore’ without being ‘over-controlled’ 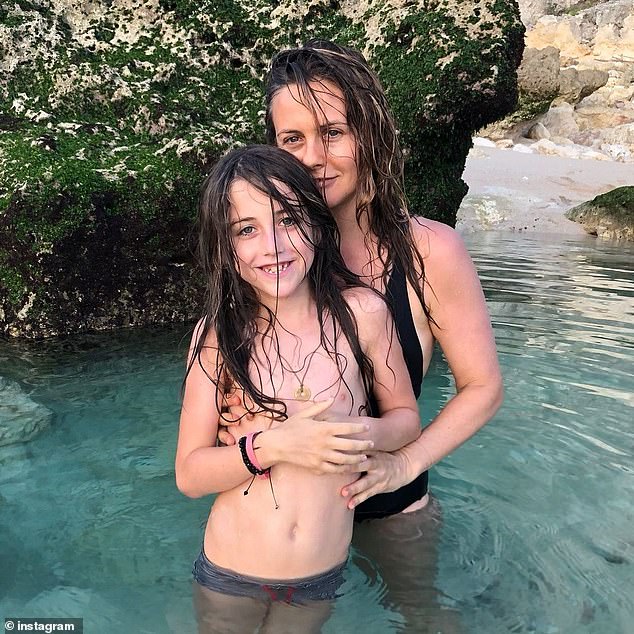 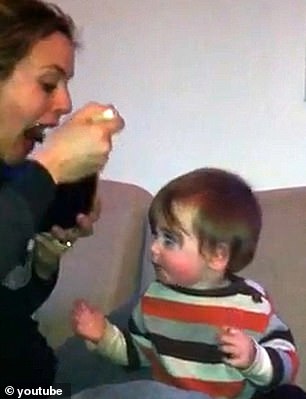 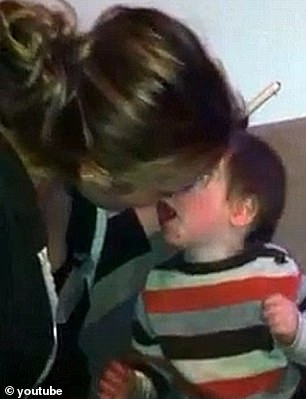 In 2012, Silverstone sparked furious controversy when she revealed that she fed her then-11-month-old son by pre-chewing his food and passing it from her mouth directly into his mouth

The Columbia University Alum added that ‘good parenting’ is knowing when to take a ‘hands off’ approach.

Dr. Markham further criticized those who continue to co-sleep with their children grow older, adding that it’s not a practice of attachment parenting because it doesn’t respond to the ‘developmental’ needs of the child, and even went as far as to call the technique ‘irresponsible parenting.’

Berit Brogaard D.M.Sci., Ph.D is a Professor and the Director of the Brogaard Lab for Multisensory Research at the University of Miami and has told Psychology Today that overly attached parents are ‘typically no less estranged from their children than neglectful or indifferent parents.’

She added that parents who raise their children with standards they believe to ‘perfect’ such as refusing them screen time or fast food creates a lifelong need for the parent to control every aspect of their children’s life, while their child grows up with an ‘unsuspecting’ need to over compensate and an expectation to never fail. 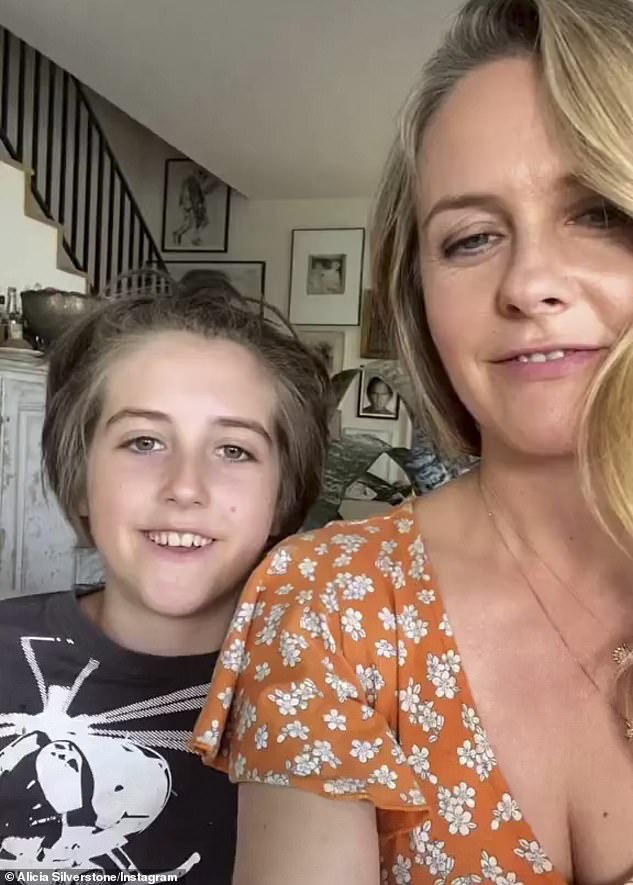 Silverstone, who follows the attachment style of parenting, said she rarely used diapers when potty training Bear and ‘snuggles’ him for two to three hours when they wake up 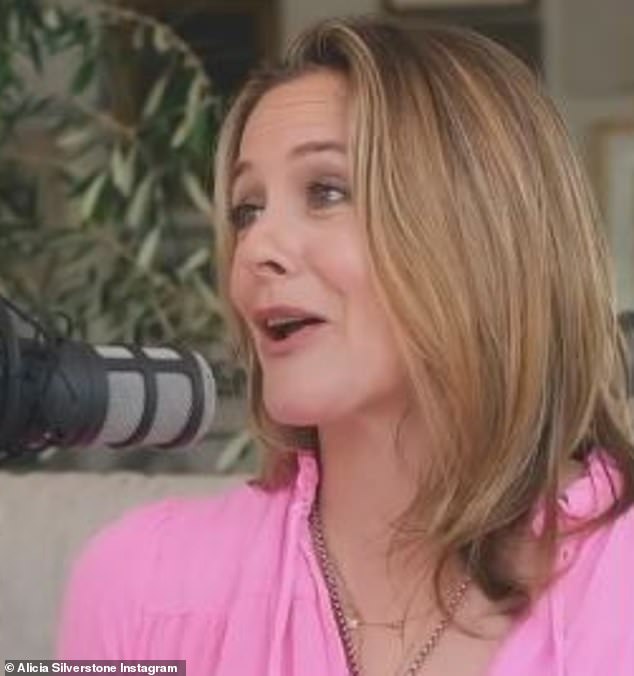 Despite criticism from experts who say she is exhibiting ‘irresponsible parenting’; the actress added that she ‘doesn’t care’

2012: Actress sparked furious controversy after sharing a video of herself feeding her then-11-month-old son like a baby bird, revealing that she was pre-chewing his food and passing it to him from her mouth to his

2014: Silverstone said in her book that she was anti-vaccination and instead relied on a vegan diet to keep her son healthy, claiming he had ‘never been sick’

2014: Her book, The Kind Mama, also laid bare her decision not to circumcise her son, despite Silverstone being raised as a Jew, writing: ‘If little boys were supposed to have their penises “fixed,” did that mean we were saying that God made the body imperfect?’

2020: In an interview with the New York Times, Silverstone admitted that she an her son still took baths together

And although Dr. Markham recommends parents take a step back as their children grow and set ‘limits’, Silverstone seems to be following her child at ‘every turn.’

In spite of clinical psychologists and parenting experts, fans of attachment parenting insist that the technique nurtures a healthier, happier relationship between parent and child, critics have warned that attachment parenting can cause children to be overdependent, while increasing the stress placed on their parents.

Silverstone has opened up about her unconventional parenting practices in the past; in 2012, she sparked debate when she shared that she was feeding her then 11-month-old son by pre-chewing his food and spitting it from her own mouth directly into his.

At the time, the actress defended her techniques by noting that ‘people have been feeding their kids that way for thousands of years.’

In 2014, the actress once again sparked furious controversy when she revealed that  that she was anti-vaccination, and instead relied upon a vegan diet to keep her son healthy – claiming at the time that he had ‘never been sick’ as a result of his plant-based food diet.

‘I’m not against Western medicine,’ she wrote. ‘The problem is we’re using it as a first step for everything, even when it’s not needed.’

The actress continued: ‘There is increasing anecdotal evidence from doctors who have gotten distressed phones calls from parents claiming their child was “never the same” after receiving a vaccine.

‘And I personally have friends whose babies were drastically affected in this way.’

Silverstone has shared her passions for natural living ever since she gained widespread recognition following her roles in The Crush (1993) and Clueless (1995), despite being met with criticism from parenting experts and fans who have said the mom-of-one is ‘ruining’ her son.