Parcel firms must get better at handling complaints, Ofcom warned today, as it confirmed new guidance amid a wave of problems with deliveries.

The regulator said that from April next year, customers will need to be told exactly who to contact and what channels they could use to make a complaint.

Parcel firms are also expected to tell customers what the complaint process will be and how long it will take to resolve, with problems to be dealt by staff ‘who have received appropriate training’.

As announced earlier this year, Ofcom will also introduce more protections for disabled customers, who are more likely to experience delivery problems and to suffer harm as a result.

Parcel firms will be required to ‘establish, publish and comply with clear and effective policies and procedures for the fair treatment of disabled customers’.

‘Under the new rules, postal operators must have policies and procedures in place to ensure disabled customers can communicate their delivery needs to them, and firms will need to ensure couriers will meet those needs when delivering parcels,’ it said.

The regulator also imposed a cap on second-class stamp prices for Royal Mail, which, as the universal service provider, is subject to more regulation from Ofcom than other postal operator.

It was also told to provide the regulator with a view of the financial sustainability of the universal service over a longer period than currently required.

However, these measures only constitute guidance for now, meaning parcel firms are only encouraged to follow the regulator’s recommendations but will not face any penalty if they fail to adhere to them.

Citizens Advice, Citizens Advice Scotland and the Communication Workers Union (CWU) said that they did not consider that guidance alone would be enough to improve parcel firms’ complaints processes.

Citizens Advice Scotland argued that Ofcom should go further and impose regulatory requirements in relation to complaints processes, or ensure that there are consequences, such as penalties and sanctions.

Lindsey Fussell, Ofcom’s networks and communications group director, said the regulator would consider enforcement action or tighter rules ‘in future’ if it is not satisfied with how parcel companies respond to the latest guidance.

‘Deliveries are part and parcel of our daily lives,’ Fussell added.

‘But the customer service that some people have been getting when a delivery goes wrong simply hasn’t been good enough.

‘So we’re strengthening our regulations to make sure people are treated fairly by delivery firms.’ 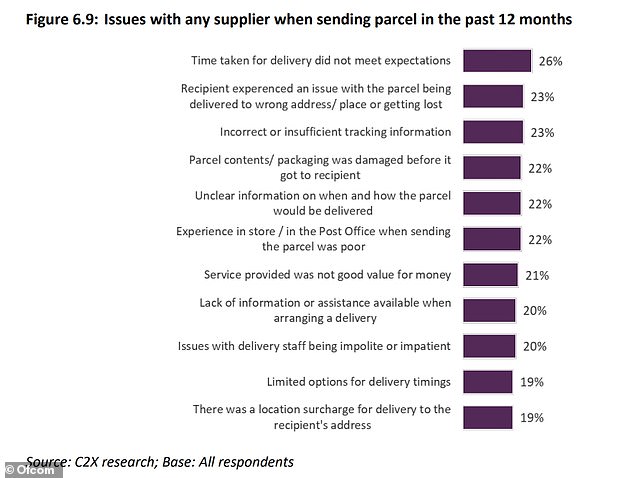 Almost two-thirds of customers had issues with deliveries last year, while around a quarter found it difficult to make a complaint when their delivery didn’t go to plan.

Similar research findings from Citizens Advice showed that 71 per cent of consumers have experienced a parcel delivery problem.

The most frequent issues were having to stay home to receive parcels, parcels arriving late, drivers leaving parcels or slips before they can get to the door, and deliveries being left in insecure locations.

Around four billion parcels are now received each year in the UK – or more than ten million a day – and Ofcom said with such a high number of deliveries ‘sometimes things can go wrong’.

‘However, with the increasing importance of parcel deliveries to consumers across the UK it is crucial that parcel operators have appropriate processes and systems in place to deal effectively and efficiently with consumers when this happens,’ it added.