A Pakistani court has ordered the release of the British Islamist militant jailed for decapitating American journalist Daniel Pearl.

Ahmed Omar Saeed Sheikh, of Wanstead, in east London, UK, was found guilty of the abduction and murder of Wall Street Journal Daniel Pearl journalist in 2002.

Sheikh was cleared of murder earlier this year but has been held while Mr Pearl’s Pearl’s parents, Judea, 83 and Ruth appeal against the acquittal.

Sheikh’s lawyer Mehmood A Sheikh called for his client to be released immediately.

‘The detention order is struck down,’ said Faisal Siddiqi, the Pearl family lawyer.

Sheikh will be freed until the appeal is completed, he said, but will be returned to prison if the family is successful in overturning the acquittal. 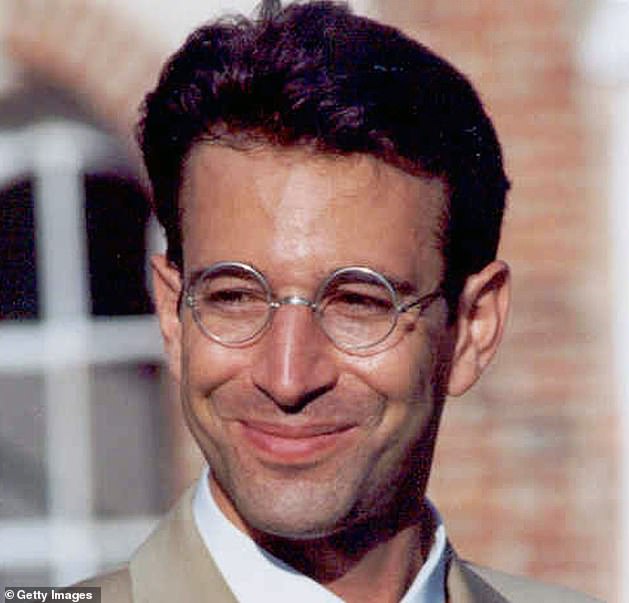 Daniel Pearl, 38, was abducted, his throat cut and then he was beheaded, before the footage was sent to the American Embassy

But a lower Pakistani court in April acquitted him and three others, a move that stunned the US government, Mr Pearl’s family and journalism advocacy groups.

The acquittal is the subject of separate appeals by the Pakistan government and Mr Pearl’s family. The government says Sheikh’s release would endanger the public.

The Supreme Court will resume its hearing on January 5.

Sheikh had been convicted of helping lure Mr Pearl to a meeting in Karachi in which he was kidnapped. 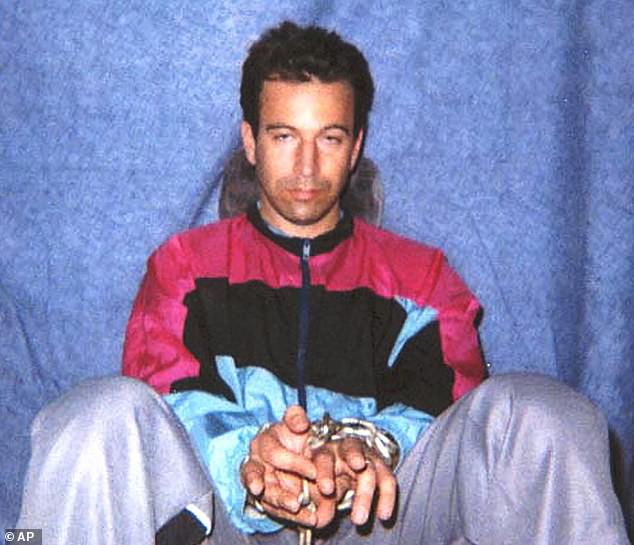 The journalist had been investigating the link between Pakistani militants and Richard C Reid, dubbed the Shoe Bomber after he tried to blow up a flight from Paris to Miami with explosives hidden in his shoes.

A gruesome video of Mr Pearl’s beheading was sent to the US consulate. The 38-year-old Wall Street Journal reporter was abducted on January.

After Sheikh’s acquittal in July, Pearls’ father, Judea Pearl, told CBS News: ‘It is a travesty of justice. 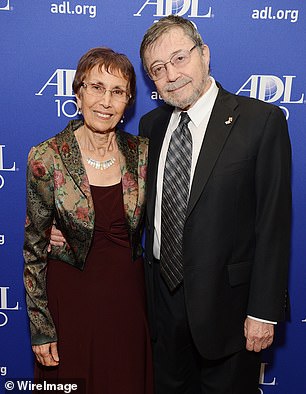 ‘One theory is that somebody tried to take advantage of the corona situation assuming that no one will pay attention to this decision.

‘And, evidently, we did pay attention.’

The Sindh High Court in April also acquitted three others accused in the case: Fahad Naseem, Sheikh Adil and Salman Saqib, who had been sentenced to life in prison.

Saeed Sheikh, a former student at the London School of Economics, was found to be the ringleader and sentenced to death in 2002.

In court testimony and emails released during the 2002 trial, Saeed Sheikh said he developed a personal relationship with Pearl before he was kidnapped, with both sharing their concerns about their wives, who were pregnant at the time.

Marianne Pearl gave birth to their son Adam in May 2002.

The Pearl Project, an investigative journalism team at Georgetown University, carried out a three-year investigation into Pearl’s kidnapping and death.

They found the reporter was beheaded by Khalid Sheikh Mohammad, who was arrested in Pakistan in 2003 and later described as the architect of the 9/11 attacks on the United States. 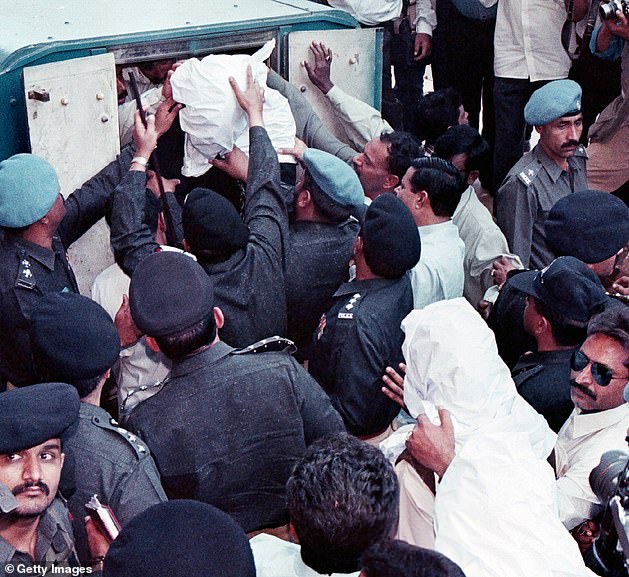 Ahmed Omar Saeed Sheikh seen here emerging from an armed car with two other suspects, all covered and bound for court, in February 2002 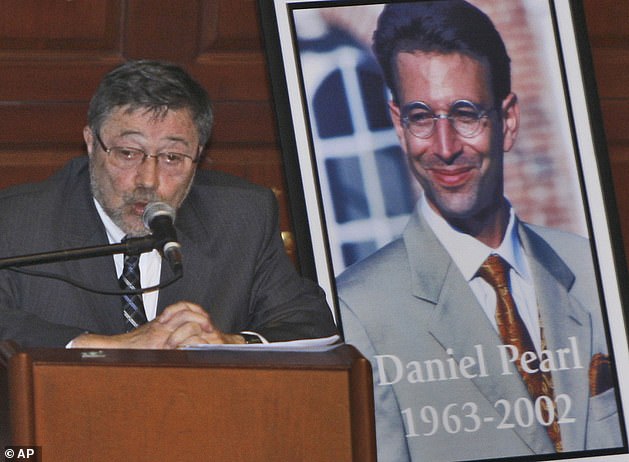 Dr Judea Pearl, father of Daniel Pearl, speaking about his son in Miami Beach, Florida, in 2007

Mohammad is a prisoner at the US Naval Base at Guantanamo Bay, Cuba.

Saeed Sheikh had been arrested in 1994 by Indian authorities, accused of kidnapping three Britons and an American, who were all freed unharmed, in Indian-ruled Kashmir.

In 1999, India freed Saeed Sheikh and two other militants in exchange for the release of 155 passengers and crew aboard an Indian Airlines plane hijacked to Kandahar, Afghanistan.

However, in January of 2011, a report published by the Pearl Project suggested the wrong people had been convicted. 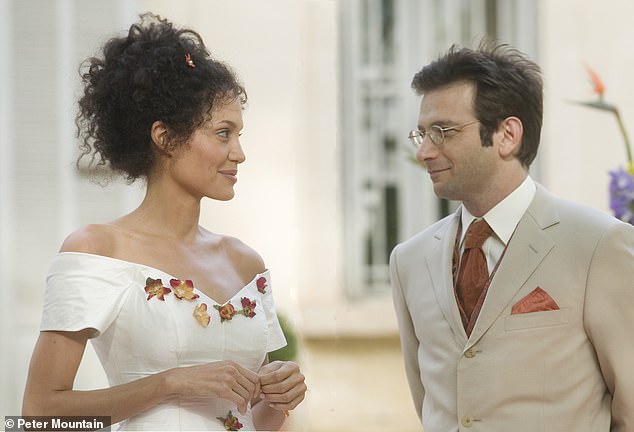 Angelina Jolie and  Dan Futterman starring in A Mighty Heart, a 2007 film about Pearl’s kidnapping

It had been led by Asra Nomani, a friend and former Wall Street Journal colleague of Pearl’s.

Nomani had been helped in the investigation by a Georgetown University professor.

The investigation made claims Pearl had been killed by Khalid Sheikh Mohammed and not Sheikh.

Though there are questions as to the extent of Sheikh’s direct involvement in Pearl’s killing, he is said to have run a kidnapping gang targeting Westerners and handing them off to Mohammed, according to Security Journalist Duncan Gardham.

Sheikh had also been an operative for a militant group backed by the powerful Inter-Services Intelligence (ISI) agency and Pearl had been writing stories about the ISI’s links to militants.

A film called A Mighty Heart was made in 2007 about Pearl’s kidnapping. It starred Angelina Jolie as Pearl’s French wife, Mariane. 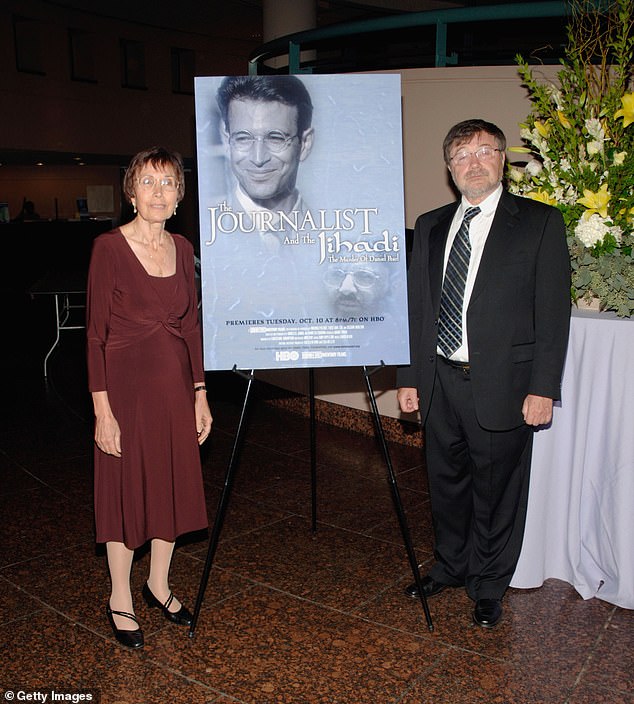 Ruth and Judea attend the HBO Documentary Films & The Daniel Pearl Foundation Premiere Of The Journalist & The Jihadi: The Murder Of Daniel Pearl on September 13, 2006 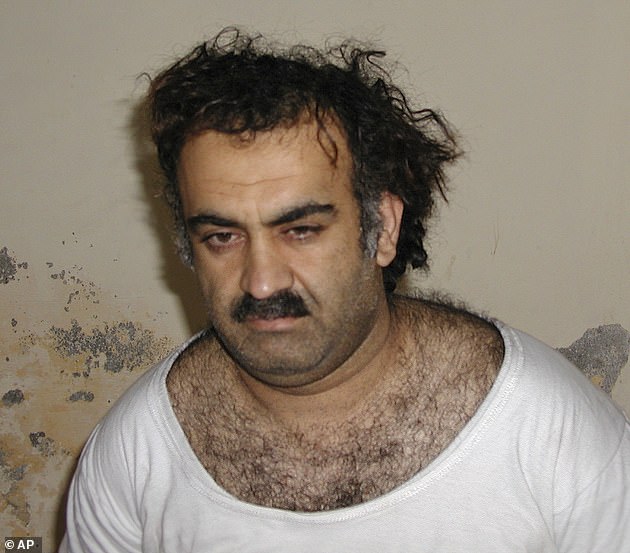 An American psychologist who talked to Mohammed said he had confessed to beheading Pearl, according to AFP.

Mohammed is due to be tried in connection to 9/11 with four others at a military court in Guantanamo in January 2021.

They are charged with war crimes like terrorism and the murder of nearly 3,000 people.

They will be the first to go on trial, nearly 20 years after the attacks on New York, Washington and Pennsylvania.

If found guilty they face the death penalty.

Sheikh’s father, originally from the Punjab Province of Pakistan settled in Wanstead East London in 1968 and established a wholesale clothing company.

Sheikh became the school chess champion at the age of 11 but his father took the family back to Pakistan when Sheikh was 13, and he was sent to Aitchison College, a prestigious school favoured by Pakistan’s elite and dubbed Pakistan’s Eton.

Sheikh returned to Forest School two years later where he competed as a shot-putter in the school athletics team, took part in organized arm wrestling competitions, and was made a school prefect.

He passed his A-levels with A grades in economics and maths, B grades in general studies and English and a D in religious studies AS level and went on to study applied mathematics, statistics, economics and social psychology at the prestigious London School of Economics.

At LSE he joined the university Islamic society and became increasingly interested political causes, travelling to Bosnia on an aid convoy on which he met a member of the Pakistani militant group Harkut-ul-Mujahideen (HuM).

He joined the group in Pakistan and attended a training camp in Afghanistan in 1993 and began to orchestrate kidnappings on their behalf.

Before the Pearl kidnapping, he befriended three Britons at a café in Delhi, India, in 1994 and invited them and an American back to his house, where his fellow kidnappers were waiting for them.

An Indian police patrol found the kidnappers close to the safe house, a gunfight broke out in which a senior Indian policeman was killed and Sheikh was shot in the shoulder. All the hostages were freed unharmed.

After five years in an Indian jail, Sheikh was released in December 1999 along with Maulana Azhar, the leader of HuM, when fellow members of the group hijacked an Indian Airways flight from Kathmandu to Delhi with 154 passengers on board and flew it to Afghanistan.

He was allowed to return to Britain and no further action was taken against him because he had not been convicted of a crime in India.

However, Sheikh moved back to Lahore, where he got married and had a child, but continued to mix in militant circles.

In January 2002, four months after 9/11, he turned his focus to Daniel Pearl, the 38-year-old, Bombay-based South Asia correspondent of The Wall Street Journal.

Pearl was researching links between Pakistani extremists and Richard Reid, the shoe bomber from Brixton, who had tried to blow up a flight to Miami the previous month.

Computer files discovered by the Journal in Afghanistan revealed that the shoe-bomber had apparently met a militant leader who led a group called Jamaat ul-Fuqra.

A friend put him in touch with a man named Chaudry Bashir – said to be Sheikh – who offered Pearl the chance to travel to Karachi to meet the leader.

Pearl agreed to meet him in the Village Restaurant downtown Karachi on January 23, the day before he and his wife, Mariane, who was pregnant, were due to fly out of Pakistan.

Four days later, on January 27, e-mails were sent to The Wall Street Journal and other media outlets from a group calling itself the National Movement for the Restoration of Pakistani Sovereignty.

The caption read ‘CIA officer Daniel Pearl who was posing as a journalist’ and demanded the release from US custody of suspected Taliban and al-Qaeda fighters, including the Taliban’s former ambassador to Pakistan, Abdul Salam Zaeef, as well as the delivery of the F-16 jets.

The Wall Street Journal sent an e-mail pleading for Mr Pearl’s release but on January 29, the Pakistani press began reporting that Pearl was Jewish, apparently after a briefing from a Pakistani official.

Sheikh’s arrest was announced by the Pakistani President, Pervez Musharraf, and he appeared in an anti-terrorism court in Karachi on February 14.

He was led into the court room with his hands chained and his head covered with a grey blanket, surrounded by dozens of police officers armed with machine guns.

He removed a blanket from his head and told the court: ‘I want to make it clear I will not defend the case. It was of my own free will.

‘Right or wrong I had my own reasons. I think our country should not be catering to America’s needs.’

Asked about the fate of Daniel Pearl he said simply: ‘As far as I understand, he’s dead.’

At a closed trial, Sheikh refused to recognize the court but his lawyers claimed that he had been in Lahore on the day in January that Pearl went missing.

Pakistani police later detained three other members of the kidnap gang who told them that they had held Pearl for nine days in an al-Qaeda safe house before a group of Arabs arrived to conduct the execution.

Khalid Sheikh Mohammed the al-Qaeda commander behind 9/11, later boasted to his American captors that he had cut off Pearl’s head ‘with my blessed right hand.’