Two Christian men could face the death penalty in Pakistan after they were accused of using insulting remarks against Islam’s holy book and its Prophet Muhammed.

Authorities are seeking the arrest of the Christian men in the city of Lahore, Pakistan’s police said Wednesday.

The case against the two men was registered last Saturday on the complaint of a Muslim local resident Haroon Ahmed, said Muratab Ali, a police investigator, who said the accused persons had yet to be arrested.

He provided no further details and only said they were still investigating to determine whether the two minority Christians made derogatory remarks about the Koran and Islam’s Prophet during a discussion on religion.

Under Pakistan’s blasphemy laws, anyone accused of insulting Islam or other religious figures can be sentenced to death if found guilty.

While authorities have yet to carry out a death sentence for blasphemy, just the accusation of blasphemy can cause riots in Pakistan.

According to domestic and international human rights groups, blasphemy allegations in Pakistan have often been used to intimidate religious minorities and to settle personal scores.

A Punjab governor was killed by his own guard in 2011 after he defended a Christian woman, Aasia Bibi, who was accused of blasphemy. 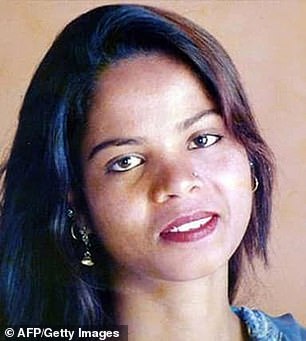 She was acquitted after spending eight years on death row and left Pakistan for Canada to join her family after receiving threats.

In 2018, her family said they were being stalked by Islamists calling for their murder.

In September last year, Pakistan sentenced a Christian man to death for sending ‘blasphemous’ texts to a former supervisor at work.

Asif Pervaiz, 37, had been in custody since 2013 for allegedly insulting Islam and was found guilty in Lahore.

He claimed after quitting his job at a hosiery factory, his supervisor Muhammad Saeed Khokher tried to convert him to Islam.

But Asif said when he refused to change his beliefs, he was then accused of having sent blasphemous texts about Islam to his boss.

Christian nurse Tabitha Nazir Gill, 30, was tied up and tortured by a mob at a Pakistani hospital after a Muslim colleague falsely accused her of blasphemy, it was reported earlier this month.

Gill was reportedly attacked and beaten by staff at the Sobhraj Maternity Hospital in Karachi where she has worked for nine years.