Two men are facing life in prison for the murder of a ‘cheeky’ and ‘charming’ 16-year-old, after one of his killers was spotted on CCTV supposedly carrying the knife used in the fatal ‘postcode war’ attack.

Jaydon James died of a single knife wound after being stabbed in the Wood End area of Coventry.

The teenager had been with friends at a bowling alley when he was chased and fatally stabbed amid an ‘ongoing feud’ between two rival gangs.

Detectives later found CCTV footage from that night of one of Jaydon’s killers, Frank Kenfack, leaving a car with an object hidden in his jacket.

They believe the item, which is shown to hamper Kenfack’s movement, was the knife used to stab Jaydon.

Now Kenfack, 18, and his accomplice, 21-year-old Abdi Hussein Abdi, have been found guilty of his Jaydon’s murder. 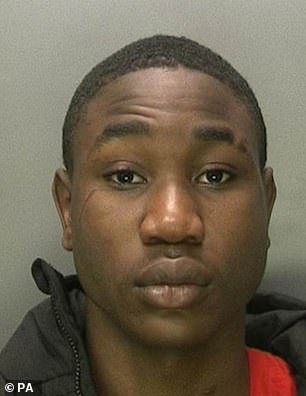 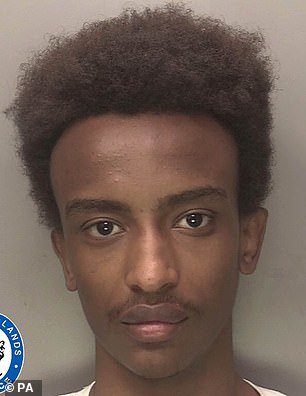 Moments before the fatal attack, CCTV footage caught one of his killers, Frank Kenfack (pictured left), leaving a car with an object hidden in his jacket. Now Kenfack, 18, and his accomplice, 21-year-old Abdi Hussein Abdi (pictured right), have been found guilty of his Jaydon’s murder 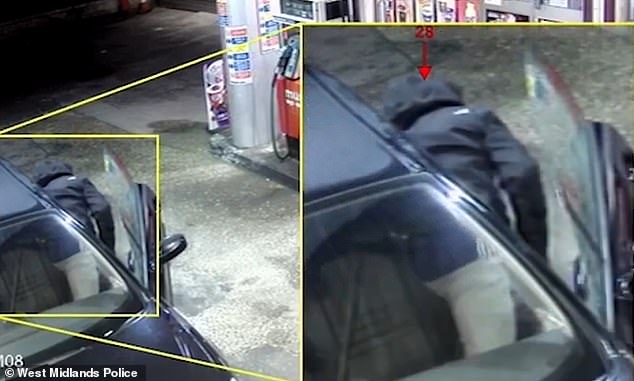 Detectives later found CCTV footage from that night of one of Jaydon’s killers, Frank Kenfack, leaving a car with an object hidden in his jacket

The pair, who both face a life sentence, are due to be sentenced on Wednesday.

During a trial at Warwick Crown Court, jury members heard how Jaydon was attacked in the Wood End area of Coventry in November 2018, while with friends.

The group were seen on CCTV on Hillmorton Road prior to the attack.

The court heard attackers Abdi and Kenfack had driven to a rival group’s territory in a black Peugeot, before Jaydon was chased to the driveway of a church.

There he was fatally stabbed. Two of his friends also suffered non-fatal stab wounds.

Opening the case against the two men at the hearing, which started in September, prosecution QC Michael Burrows said the killing came after a series of incidents involving the RB7 and C2 gangs.

The prosecutor told the court the C2 gang’s ‘perceived territory’ was the CV2 postcode, which includes Wood End, while RB7’s members came from areas in and around Coventry city centre.

Mr Burrows told the jury: ‘The rivalry between the two gangs has resulted in a number of incidents of serious violence.’

Some weeks before his death, Jaydon had confided in his mother that he feared gang members from RB7 were out to assault him.

Days later he was punched and robbed of his coat and mobile phone.

Mr Burrows added: ‘Of course, Jaydon James is not here to tell us who attacked him on the night he was killed, but from what he told his mother, it’s clear he had been targeted and attacked by lads he identified as being from RB7.’

Commenting, Detective Inspector Stuart Mobberley, of West Midlands Police, said: ‘This was a young boy, just 11 days after his 16th birthday, whose life was so cruelly taken away.

‘There are no words I can say to comfort his mother and his wider family, but I hope this conviction can go some way to help them come to terms with his death.

‘I don’t believe that Jaydon was targeted that night, he was just in the wrong place at the wrong time and his killers were simply out for revenge.’

Paul Farrow, a specialist prosecutor at CPS West Midlands, said: ‘I hope this conviction serves as a deterrent to those who consider arming themselves with weapons and makes them stop and think about the outcomes that may follow.

‘Our thoughts are with Jaydon’s family and friends at this time.’

Jaydon’s grandmother described her grandson as a ‘cheeky charmer’ who could ‘always wrap me around his finger’. 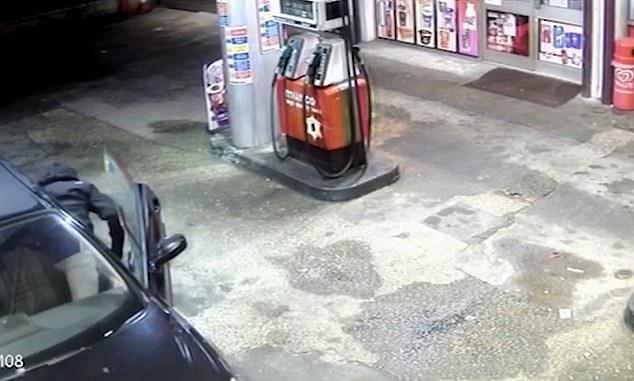 Police later found CCTV footage from that night of one of Jaydon’s killers, Frank Kenfack, leaving a car with an object hidden in his jacket

She added: ‘My grandson had the biggest heart and would do almost anything for anybody that needed help.’

While grieving the loss of her son, known to his friends as JJ and his family as Juie, Jaydon’s mother is also grieving for the life that could have been.

She said: ‘My son didn’t get to finish his GCSE’s or go to his school prom. I won’t see my son grow into a man, for him to have a career, to grow as a person.

‘I won’t get to spend special occasions with him that every parent takes for granted, those special landmark birthdays 18th, 21st.

‘My son won’t bring home to me the girl he has chosen to marry, I won’t see him become a father.’

Kenfack, 18, of no fixed address, and Abdi, 21, of Foleshill Road, Coventry, will be sentenced on Wednesday after being found guilty of murder and wounding.

A third defendant, 18-year-old Bongani Ngozi, was acquitted of murder and wounding.

The trial was a second trial, after the original trial was abandoned due to March’s Covid-19 lockdown.