We wiped the smile off her face! Painting of grumpy Renaissance grocer is restored after grin was added

The mysterious unsigned painting of a lone female figure surrounded by an array of fresh produce has baffled curators for centuries.

But English Heritage may have finally uncovered the identity of the man behind The Vegetable Seller after carrying out a two year conservation project on the 450 year old piece.

‘We have wiped the smile off her face, I’m afraid,’ Alice Tate-Harte, English Heritage’s collections conservator told The Times. ‘But there is a wonderful painting restored to its former glory.’

Experts believe the painting could be a Joachim Beuckelaer, the pre-eminent still life artist who was working in Antwerp before the Dutch Golden Age.

Restoration of the painting, which began in 2019 at the English Heritage conservation studio, saw the removal of degraded varnish and areas of overpainting to reveal the original colours underneath.

Together with non-invasive infrared imaging, the project uncovered the remarkable similarities between The Vegetable Seller and other works by Beuckelaer.

The findings have also helped date the painting to the late 16th century when Beuckelaer was working, quashing previous assumptions that the artwork could be an 18th-century copy.

Experts discovered that sometime in the late 18th or early 19th century, a strip of canvas had been added to enlarge the original rectangular format of the painting into a square. 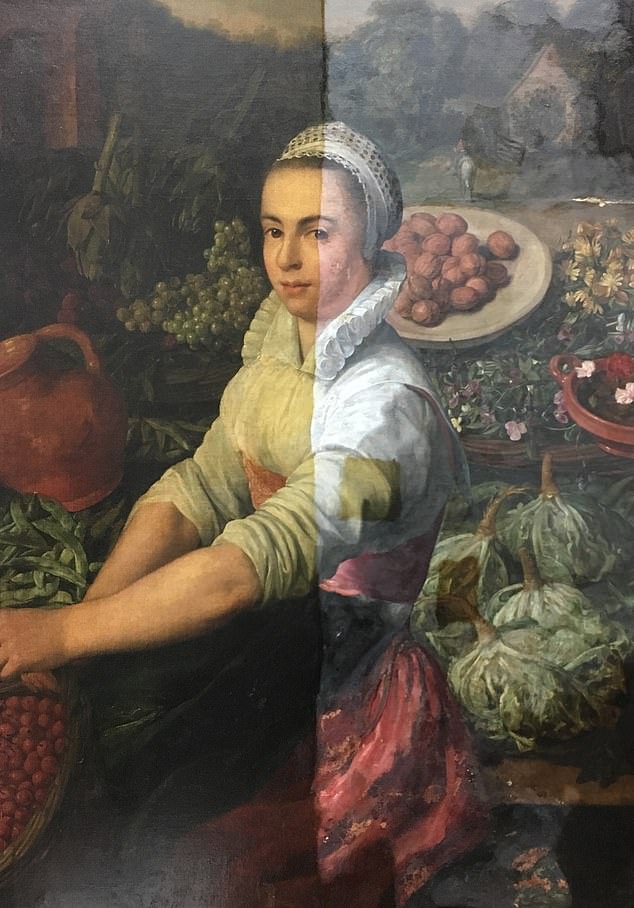 This was carefully removed, with the painting restored to its original shape.

Beuckelaer’s most famous works include The Four Elements which are on display in the National Gallery in London.

The Vegetable Seller has now been reinstated to Audley End’s art collection for the first time in 60 years.

It was acquired by the country house during the second half of the 18th Century by the then owner Sir John Griffin Griffin.

Ms Tate-Harte said: ‘We’re so pleased that visitors to Audley End will now be able to see such a wonderful painting restored to its former glory.

‘From the first cleaning test we had a glimpse of the beautiful colours beneath all the grime, which was incredibly exciting.

‘The restoration also means that after years of The Vegetable Seller being something of a mystery, we are closer to possibly uncovering the identity of the artist.’