EXPRESS INFORMER > Science & Technology > Ozone hole has SHRUNK by more than 700,000 square miles due to damaging chemicals being banned

The ozone hole over the South Pole has shrunk by 700,000 square miles – a size similar to Texas – compared to this time last year, providing hope to scientists who believe it is the elimination of ozone-depleting substances that is decreasing the hole.

Satellite observations determined the ozone hole area reached a single-day maximum of 10.2 million square miles on October 5, but is now back to the consistent depletion observed over the last few years.

The closing of the gap is likely due to the Montreal Protocol, a treaty adopted 35 years ago to ban the release of harmful ozone-depleting chemicals called chlorofluorocarbons, or CFCs, that were used in aerosols.

The hole reached an average area of 8.9 million square miles between September 7 and October 13, which is 700,000 square miles smaller than this time last year

Paul Newman, chief scientist for Earth sciences at NASA’s Goddard Space Flight Center in Greenbelt, Maryland, said in a statement: ‘Over time, steady progress is being made, and the hole is getting smaller.

‘We see some wavering as weather changes and other factors make the numbers wiggle slightly from day to day and week to week.

‘But overall, we see it decreasing through the past two decades. The elimination of ozone-depleting substances through the Montreal Protocol is shrinking the hole.’

The ozone layers sits in stratosphere, protecting Earth from the sun’s ultraviolet rays and when there is a hole those rays are able to hit our planet. 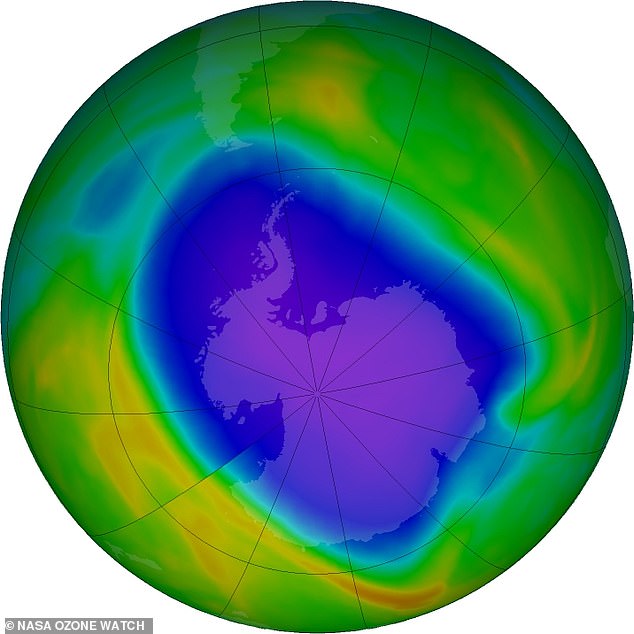 This year’s hole is slightly smaller than the the 8.99 million square miles it was in 2021 (pictured)

However, the layer thins and forms a hole’ above the South Pole every September due to chlorine and bromine from human-produced compounds attaching to high-altitude polar clouds each southern winter.

The reactive chlorine and bromine then initiate ozone-destroying reactions as the sun rises at the end of Antarctica’s winter.

Researchers at NASA and NOAA detect and measure the growth and breakup of the ozone hole with instruments aboard the Aura, Suomi NPP, and NOAA-20 satellites.

Some scientists were concerned about potential stratospheric impacts from the January 2022 eruption of the Hunga Tonga-Hunga Ha’apai volcano.

However, no direct impacts from Hunga Tonga have been detected in the Antarctic stratospheric data.

The Montreal Protocol, established in 1987, is an international treaty that protects the stratospheric ozone layer by phasing out the production and consumption of ozone-depleting substances. 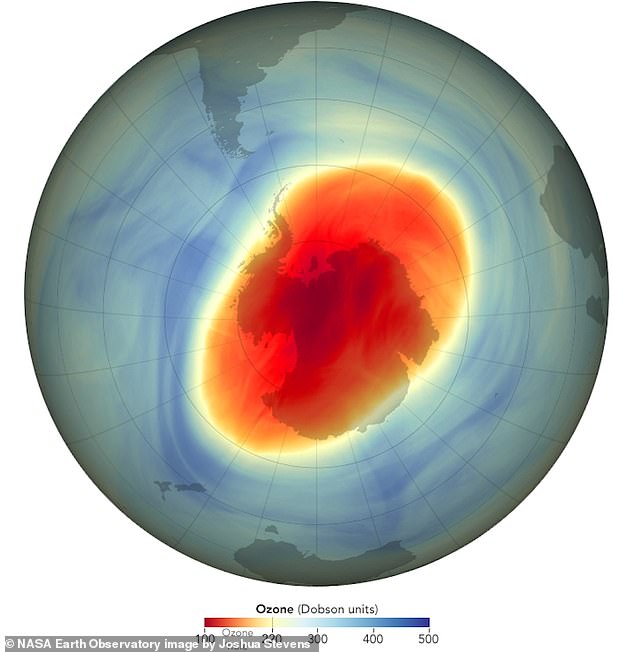 The closing of the gap is likely due to the Montreal Protocol, a treaty adopted 35 years ago to ban the release of harmful ozone-depleting chemicals called chlorofluorocarbons, or CFCs, that were used in aerosols

The treaty came about to mend a giant hole in the ozone layer that appeared in the early 1980s.

Without the Montreal Protocol, researchers said we would already be facing the reality of a ‘scorched Earth,’ according to a 2021 study.

Banning the chemicals, which include chlorofluorocarbons (CFCs) once widely used in fridges and spray cans, protected the climate in two ways, the research found.

It helped curb their greenhouse effect and, by protecting the ozone layer, shielded plants from damaging increases in ultraviolet radiation (UV).

Without the treaty, we would have experienced a worldwide collapse in the ozone layer by the 2040s and 60 percent less ozone above the tropics by 2100.

The strength of the UV from the Sun in mid-latitudes, which includes most of Europe including the UK, US and central Asia, and also New Zealand, would be stronger than the present day tropics by 2050.

The depleted ozone layer would have seen the planet, and its vegetation, exposed to far more of the Sun’s UV.

They are used in the manufacture of aerosol sprays, blowing agents for foams and packing materials, as solvents, and as refrigerants.

CFCs are classified as halocarbons, a class of compounds that contain atoms of carbon and halogen atoms.

Individual CFC molecules are labelled with a unique numbering system.

For example, the CFC number of 11 indicates the number of atoms of carbon, hydrogen, fluorine, and chlorine.

Whereas CFCs are safe to use in most applications and are inert in the lower atmosphere, they do undergo significant reaction in the upper atmosphere or stratosphere where they cause damage.