By Harry Cole and James Heale For The Mail On Sunday

Oxford University bosses privately slammed their students as ‘ridiculous’ for cancelling a speech by former Home Secretary Amber Rudd at the last minute – but admitted they were powerless to stop them.

However, after pressure from Education Secretary Gavin Williamson, the university’s vice-chancellor intervened to publicly criticise the protest stunt.

The Mail on Sunday can reveal correspondence between senior university staff that shows a strong statement denouncing the cancellation was only published after pressure from the Government and from political campaigner Toby Young.

Now emails obtained under the Freedom of Information Act reveal the anguished conversations between Oxford staff over how to respond to the backlash against the cancellation.

One message from the communications team to the vice chancellor, Professor Louise Richardson, says of UN Women Oxford: ‘The proctors do not interfere with their day-to-day activities but can speak to them… Off the record, they advise they will request a formal apology to AR [Amber Rudd], although they cannot compel them to do so.’

Other emails criticise the students’ ‘ridiculous behaviour’ and warn Ministers are poised to step in after ‘losing patience with the sector in general, and what they perceive as slowness and inconsistency’ in responding to freedom of speech issues.

Prof Richardson replied that she had spoken to the Education Secretary’s special adviser ‘but all I knew about [the issue] was what I read in the papers’. 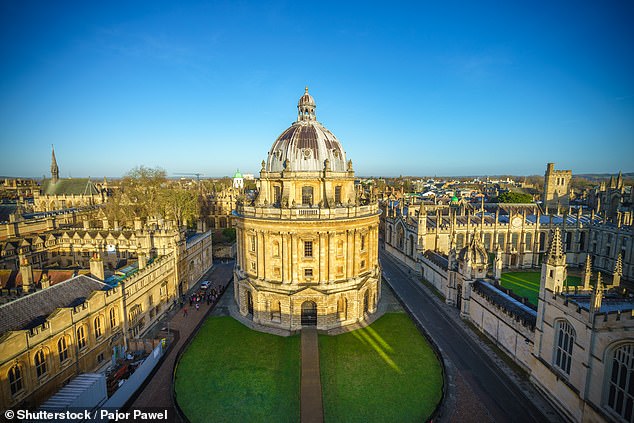 However, after pressure from Education Secretary Gavin Williamson, the university’s vice-chancellor intervened to publicly criticise the protest stunt. Pictured: Aerial view of Oxford

She approved a statement condemning the cancellation and added: ‘Williamson will be issuing a statement… We have to be unequivocal in our repudiation.’

The emails also highlight staff concern at the involvement of the journalist Toby Young and his pressure group the Free Speech Union, noting that he had a ‘detailed understanding’ of laws and procedures.

Last night, the writer declared the revelation a victory for the union he launched two months ago in the MoS, which has launched its own campaign, Fighting For Free Speech.

He said: ‘It’s clear that the Free Speech Union is already having an impact on how university administrators deal with students trying to shut down political debate on campus.

‘They know we’ll hold their feet to the fire if a speaker is no-platformed, as we did in this case.

‘We lodged a formal complaint with the proctors and in response they deregistered the feminist society responsible and directed it to apologise to Amber Rudd.

‘It’s also clear the Education Secretary is deeply concerned about the free speech crisis on campus and is prepared to take action.’

Following the row, national charity UN Women UK severed ties with the student society, which has since changed its name.

Ms Rudd criticised the blocking of her speech encouraging women into politics as ‘outrageous and disappointing’.

An Oxford University spokesman said last night: ‘Oxford’s vice-chancellor has a long history of defending freedom of speech and the Secretary of State had nothing to do with the university’s position on this matter.’