A professional football side almost missed their match yesterday after an anti-coronavirus spray stopped the team bus in its tracks.

Players at League One side Oxford United had taken their seats on the bus when the vehicle was sprayed with the alcohol-based aerosol.

But when the driver then blew into the breathalyser, it recorded a positive reading and immobilised the engine for six hours.

The players and coaching staff were left scrambling to make the journey to Accrington Stanley’s Crown Ground for the 3pm kick-off.

When the driver then blew into the breathalyser, it recorded a positive reading and immobilised the engine for six hours (file image) 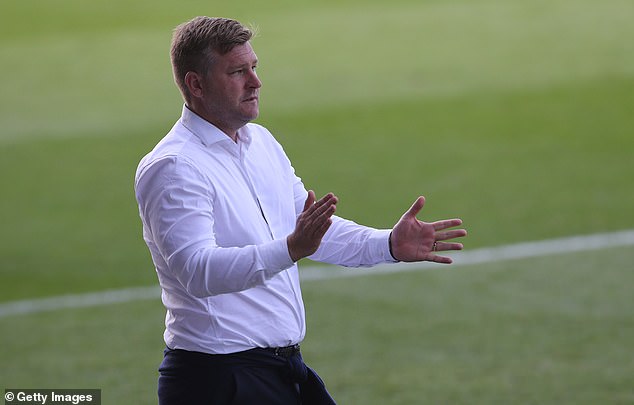 The players and coaching staff were left scrambling to make the journey to Accrington Stanley’s Crown Ground for the 3pm kick-off. Pictured, Oxford manager Karl Robinson

Manager Karl Robinson, whose squad has been plagued by injuries in recent weeks, said: ‘We spent a lot of money making sure our players are safe and everything that goes with it.

‘The problem is the blowing machine got affected by the alcohol gel on the coach, which meant when he blew into it, the coach stalled and wouldn’t start for six hours. We had to use staff cars, taxis, you name it, to get to the ground.’

He added: ‘This week has certainly been sent to test us. But it won’t affect our attitude, the players are motivated by what’s gone wrong.

‘That’s the beauty of life – when the going gets tough, the tough get going.’

The day ended in smiles for the team as they recorded a 4-1 victory – their first of the season.

Does virus fate lie in our DNA?

Scientists believe the secret to why some people become critically ill with Covid – and others don’t – could lie in their DNA.

A University of Edinburgh team is seeking volunteers, with a particular appeal to hard-hit black and other minority communities.

Research leader Dr Kenneth Baillie told BBC Radio 4’s Today programme yesterday that DNA samples were being taken from every Covid patient who became critically ill and then compared with other people less badly affected by the disease.

‘By looking at the differences in their DNA, we can find what it is that’s actually causing the disease to progress so severely in the critically ill patients,’ he said.