Imagination Industries – owner of Ovo Group, which has 4.5million energy customers – has just two directors. One is billionaire founder and chief executive Stephen Fitzpatrick and the other is chief financial officer Vincent Casey.

The loans were disclosed in Imagination’s latest accounts, where separately its auditors raised concerns about the company’s borrowings.

Ovo represents the bulk of Fitzpatrick’s eclectic business empire. His interests include a US-listed flying taxi firm registered in the Cayman Islands. He also owns the Kensington Roof Gardens in London, which was previously a party venue owned by Sir Richard Branson.

Fitzpatrick, a Belfast-born former City trader, launched Ovo as a challenger to the Big Six energy suppliers. Soaring gas prices and strained household budgets have sparked concerns about its finances.

Earlier this year, Fitzpatrick was grilled by MPs over £40million worth of intercompany loans and payments, which he said he did not recognise. They called on him to ‘open the books’ to provide more clarity.

Documents for the year ending December 2021 show a loan of £27million was made to the directors of Imagination and settled by means of a share buyback. The terms of the loan were not disclosed. Fitzpatrick owns 100 per cent of Imagination’s share capital.

Ovo declined to comment when asked the reason for the loan.

Separately, a £3.75million loan was made to Kensington Roof Gardens by Imagination with an interest rate of 7 per cent. Nearly £3million in loans were also made to Vertical Aerospace, Fitzpatrick’s fledgling flying taxi venture.

Lending £27million to directors is unusual, however there is no suggestion that the loans breached any financial rules or were illegal. Since launching Ovo in 2009 with a £350,000 kitty, Fitzpatrick has accumulated staggering riches. These allowed him to buy a Formula 1 team in 2015, although the venture collapsed just two years later.

He was scrutinised for taking £2million out of Ovo in 2013 – when the company was still in its infancy and loss-making – to pay for a house in the Cotswolds.

A leading accountant, who asked not to be named, said the directors’ loans were ‘not what you expect from a company that is looking after so many domestic customers’, adding that the balance sheet is ‘very weak’.

In the Imagination accounts, which were signed off in late September, blue-chip accountancy firm PricewaterhouseCoopers expressed a ‘material uncertainty’ over the group’s ability to continue as a going concern.

The auditor said: ‘The group is forecasting to breach financial covenants with trading creditors under the base case and the severe but plausible downside scenarios which could allow the counterparties to terminate such arrangements or request additional collateral.

‘If this were to happen, the group may not be able to secure an alternative counterparty to facilitate continued trading on a sustainable basis.’ 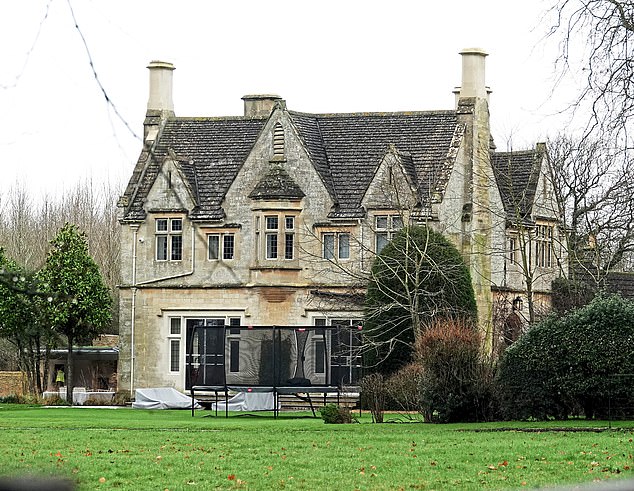 Ovo boss Stephen Fitzpatrick own a mansion in the Cotswolds

Imagination, which derives its entire revenues from Ovo Group, reported turnover of £4.5billion and profits of £337million.

The Mail on Sunday revealed last month that Ovo racked up losses of £300million in the three years to 2020. Imagination’s profits this time were thanks to a one-off £422million gain by cashing in on energy contracts.

The auditor’s warnings represent a more pessimistic outlook than Imagination’s previous annual report, which did not identify any concerns that could ‘cast significant doubt’ on the group. They also follow a similar caution published in Ovo’s accounts in September.

Questions may also be asked about Fitzpatrick’s attendance at Ovo’s board meetings. He missed two out of four gatherings, so he was present at fewer than any other director. The reason for his absences is not known.

Fitzpatrick was a vocal campaigner for state intervention when energy prices soared this year. He pleaded with Ministers to stop people going cold and hungry.