Health experts have warned that the June 21 unlocking is still ‘too early’ – despite the ‘remarkable’ progress in the country’s vaccine rollout.

New figures show that more than half of people in their 30s in England have received a coronavirus vaccination in a period of little over two weeks.

NHS England said that, since it began opening up the vaccine rollout to this age group on May 13, some 53 per cent of those aged 30 to 39 have been given at least one dose.

People aged 30 to 31 were the most recent group to be invited for their jab – from Wednesday – with more than five million appointments made through the national booking service within 72 hours.

NHS England confirmed that in the two weeks since opening up vaccines to people aged 30 to 39, ​some 53 per cent have been given at least one dose. Pictured: Alex Morton receives her Covid-19 jab at the Life Science Centre International Centre for Life in Newcastle 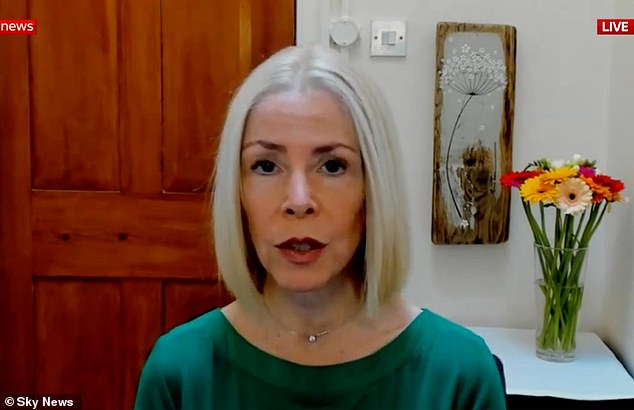 Linda Bauld, professor of public health at the University of Edinburgh, has said June 21 is ‘too early’ to lift coronavirus restrictions in England

It means the government continues to be on track to hit the deadline of offering a vaccine to every adult by the end of July.

The continued success of the rollout is also one of the government’s four tests to allow a further easing of restrictions, with the final one in just over three weeks time.

But Linda Bauld, professor of public health at the University of Edinburgh, has said June 21 is ‘too early’ to lift coronavirus restrictions in England.

She told Sky News: ‘I really think that it is too early to be charging ahead. I would like to see several more weeks’ data.’

She said the planned date is ‘very ambitious’, adding: ‘The 21st of June is very soon and I think to avoid more preventable deaths… we really need to be cautious at the current time.’ 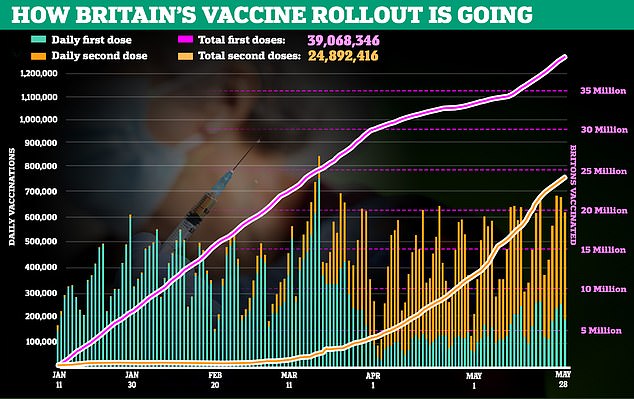 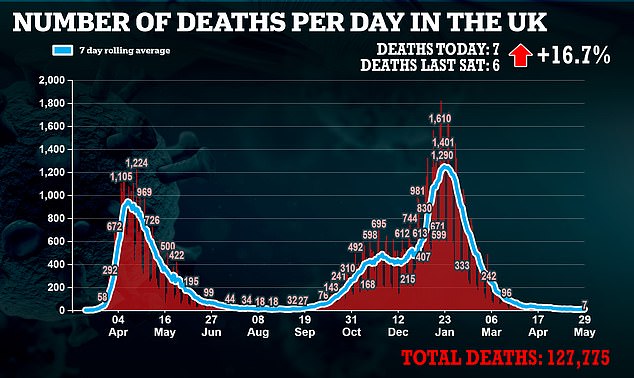 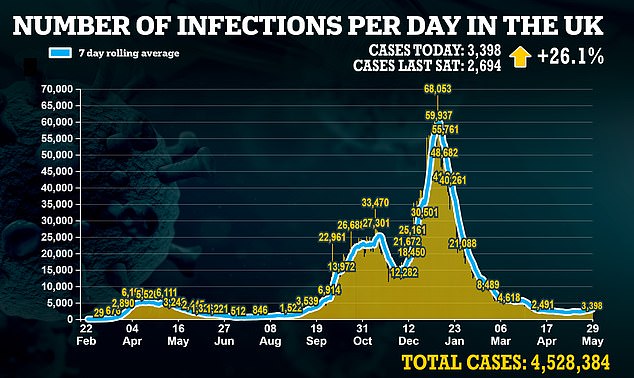 Figures from May 28 show that 39,068,346 people have had their first shot in Britain. 3,398 Covid infections were recorded yesterday, a jump of 25 per cent, while deaths increased slightly to seven

It comes as a scientific adviser warned confusion over the Government’s handling of Covid restrictions was undermining efforts to control the virus.

Professor Stephen Reicher, a psychologist on the Sage sub-committee advising ministers on behavioural science, said the Government was in a ‘pickle’ because it appeared to have abandoned the ‘data not dates’ principle.

The NHS, meanwhile, is asking people aged 50 and older, as well as those who are clinically vulnerable, to bring forward their second Covid-19 vaccination to help combat the spread of the B1.617.2 variant first identified in India.

It follows the Joint Committee on Vaccination and Immunisation (JCVI) recommending earlier this month that the second dose interval be shortened from 12 weeks to eight for people in priority cohorts.

NHS England said that, so far, 600,000 people have been invited to rearrange their second jab through the national booking service, with around a quarter moving their appointment earlier.

NHS chief executive Sir Simon Stevens said: ‘It is remarkable that, in little over two weeks since people in their 30s began getting their invites, more than half have now had their first dose.

‘This success is no happy accident but the result of months of careful planning and the sheer hard work and dedication of NHS staff.

‘The Covid-19 vaccine is our most effective weapon against coronavirus and the best way of protecting yourself and loved ones, so, if you do one thing this bank holiday weekend, book your lifesaving jab and, crucially, if you’re contacted by the NHS to do so, bring forward your second dose of vital protection.’

Health Secretary Matt Hancock said he is ‘absolutely thrilled’ at the progress in the 30s age group and thanked those coming forward ‘to do their bit to defeat the virus’.

He added: ‘As we enjoy the reopening of pubs and restaurants again, vaccines will play a crucial role in protecting us and those around us.

‘Vaccines are the best way out of this pandemic and I urge everybody to take up the offer when eligible.’

Meanwhile, British intelligence operatives reportedly now believe it is ‘feasible’ the pandemic began with a leak from a research laboratory in Wuhan, China.

The Times says the development, which Beijing has angrily denied, has prompted US diplomatic sources to share their concerns ‘we are one wet market or bio lab away from the next spillover’.