A picture of the tandoori oven thought to have been used to dispose of Jamal Kashoggi’s body after his murder two years ago has been released for the first time.

The picture shows a team of forensic police inspecting the oven as part of the investigation at the Saudi Consulate where Kashoggi was killed on October 2, 2018.

To mark the second anniversary, journalists and human rights activists called for justice for the The Washington Post columnist on Friday, holding a demonstration near the consulate in the Turkish capital. 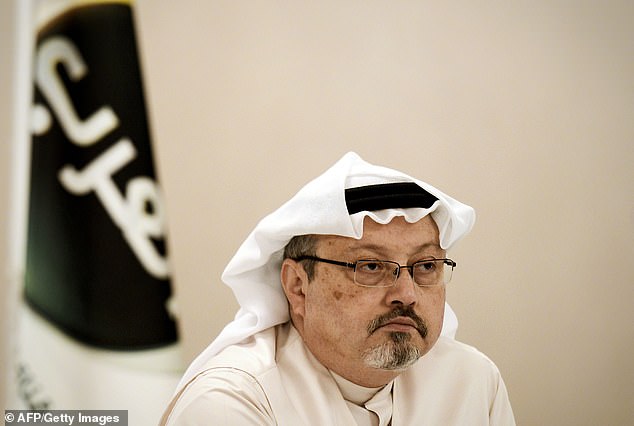 In July, a Turkish court opened the trial in absentia of two former aides of Saudi Crown Prince Mohammed bin Salman and 18 other Saudi nationals over the 2018 killing of Washington Post columnist Jamal Khashoggi (pictured)

It is believed that the oven shown in the picture was used to burn Khashoggi’s body after he was killed inside the consulate.

The series of pictures also show the forensic team using UV lights to detect blood stains on the walls and the floors inside the building.

In July, a Saudi embassy worker told the Khashoggi murder trial that he saw many ‘skewers of meat’ and was told by ‘panicked’ staff to light the oven on the day the journalist was killed and dismembered.

‘There were five to six people there… They asked me to light up the tandoor (oven). There was an air of panic,’ he said.

According to the indictment Demir also reported seeing many skewers of meat, and noticed that the marble slabs around the oven appeared to have changed colour as if they had been cleaned with a chemical. 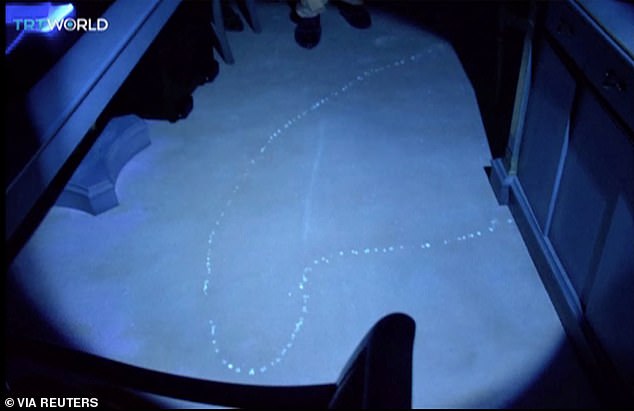 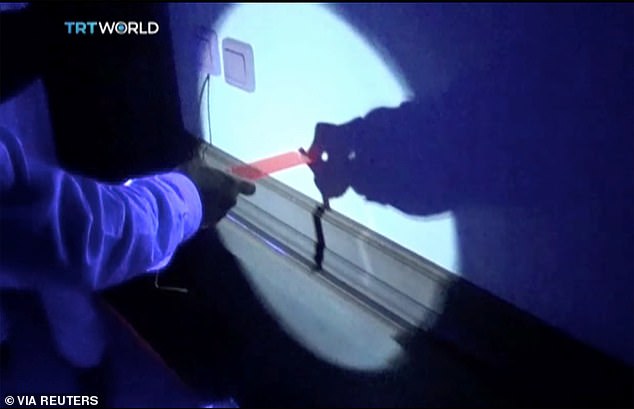 In July, a Saudi embassy worker told the Khashoggi murder trial that he saw many ‘skewers of meat’ and was told by ‘panicked’ staff to light the oven on the day of the murder

Dozens of activists gathered at a memorial erected in Khashoggi’s honour near the Saudi Consulate building in the Turkish city.

The activists denounced the journalist’s slaying, which cast a shadow over the reputation of Crown Prince Mohammed bin Salman, and criminal proceedings in Saudi Arabia as inadequate.

‘Justice has still not materialized,’ journalist Turan Kislak, who was a friend of Khashoggi’s, said. ‘A theatrical court has been in session for two years. However, no details on this subject has been given to the world.’ 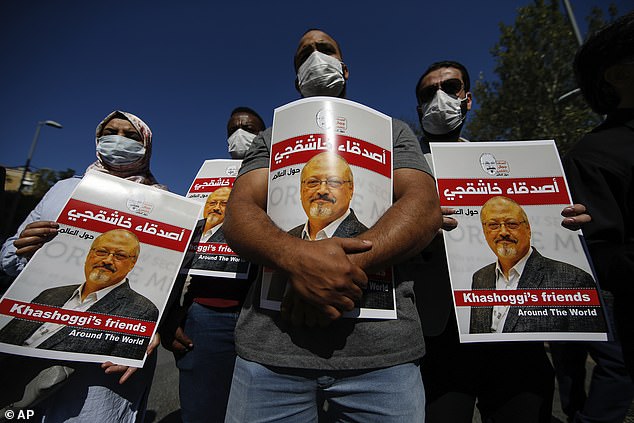 Today, activists held a demonstration near to the Saudi Arabia consulate in Istanbul to mark the second anniversary of Khashoggi’s murder at the site 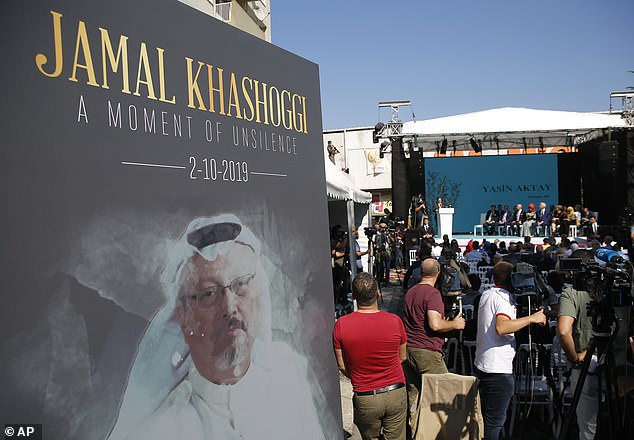 The gathering was held outside the consulate building, starting at 1:14 p.m. (1014 GMT) marking the time Khashoggi walked into the building where he was killed

The verdicts by the Riyadh Criminal Court came after Khashoggi’s son, who still resides in the kingdom, announced pardons that spared five of the convicted individuals from execution.

The trial has been widely criticized by rights groups and observers, who said it was conducted behind closed doors and lacked transparency.

‘What happened to Jamal Khassogi’s body? If a court has been in session for two years, we want an explanation,’ Kislak said.

Turkey, which had insisted that the suspects be extradited and put on trial in the country, is now trying two of the Saudi crown prince’s former aides other Saudi nationals in absentia. 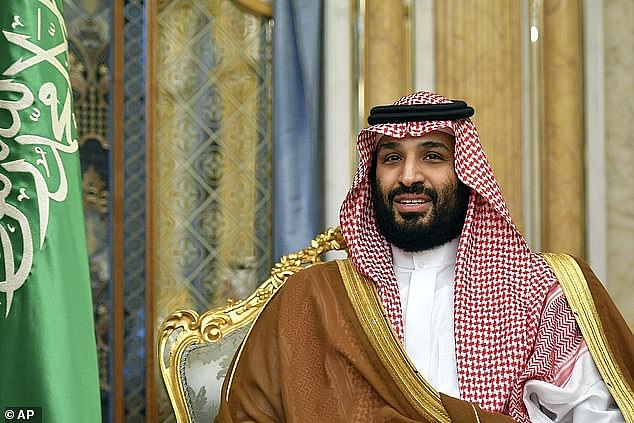 Prosecutors have indicted the 20 Saudi nationals over Mr Khashoggi’s grisly killing at the Saudi Consulate in Istanbul in 2018, which cast a cloud of suspicion over Prince Mohammed (pictured)

A team of 15 Saudi agents had flown to Turkey to meet Khashoggi inside the consulate for his appointment on Oct. 2, 2018 to pick up documents that would allow him to marry his Turkish fiancee, who waited outside.

The team included a forensic doctor, intelligence and security officers, and individuals who worked directly for the crown prince’s office, according to Agnes Callamard, who investigated the killing for the United Nations.

Turkish officials allege Khashoggi was killed and then dismembered with a bone saw inside the consulate. His body has not been found.

Prior to his killing, Khashoggi had written critically of Prince Mohammed in columns for The Washington Post at a time when the young heir to the throne was being widely hailed by Washington for pushing through social reforms.

The Vienna-based International Press Institute, a press freedom advocacy group, decried the lack of justice for Khashoggi in a statement issued earlier this week.

‘Two years have passed since Jamal Khashoggi was murdered, yet Saudi Arabia has failed to name or hold responsible the mastermind behind the killing,’ IPI Executive Director Barbara Trionfi said. 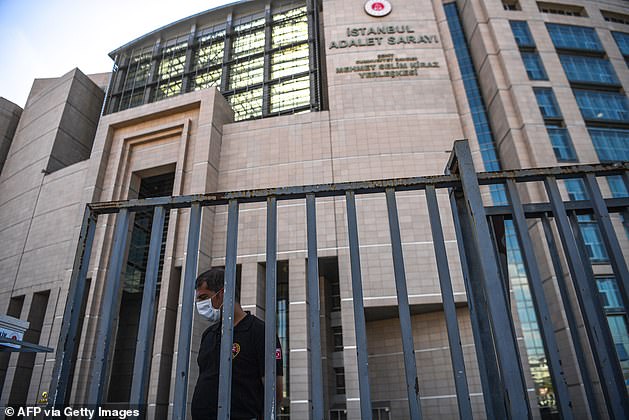 Last month, a court in Saudi Arabia issued final verdicts convicting eight unnamed Saudi nationals in Khashoggi’s 2018 killing, but the court has been denounced by many. In July, a Turkish court opened the trial in absentia (pictured)

‘The fact that Saudi Arabia has managed to avoid any real consequences for this abominable act exposes the hypocrisy of human rights discourse by governments that continue to roll out the red carpet for the Kingdom.’

‘The recent verdicts in the Saudi trial are a mockery of justice that the international community should not accept,’ she said.

Meanwhile, Khashoggi’s family and friends this week launched the work of Democracy for the Arab World Now, a nonprofit organization that Khashoggi founded not long before he was killed. They accused the United States of ‘shielding the top Saudi officials responsible for his death.’

‘Rather than cozy up to the Saudi officials who ordered Khashoggi’s gruesome murder, the Trump administration should provide the transparency that Congress has demanded regarding our government’s knowledge about Saudi Crown Prince Mohamed bin Salman’s role in this crime,’ DAWN’s executive director, Sarah Leah Whitson, said.