Channel 4 has been criticised for its ‘deepfake’ version of The Queen’s Christmas Day speech which saw the monarch discussing Harry and Meghan as well as her son Prince Andrew.

The channel produces a light-hearted alternative to the annual Christmas address but this year’s offering has angered viewers, some of which branded it ‘woke rubbish’, ‘disgusting’ and ‘mean spirited’.

This year it made a mockery of the Queen – with jibes aimed at Prince Andrew, the Duke and Duchess of Sussex and Boris Johnson – 25 minutes after the Queen’s BBC broadcast at 3pm.

The digitally-created ‘deepfake’, played by actress Debra Stephenson, aired this afternoon and was filled with gags, including jokes about the toilet roll shortage at the beginning of the pandemic and saw the monarch perfecting her moves for a dance on Tik Tok. 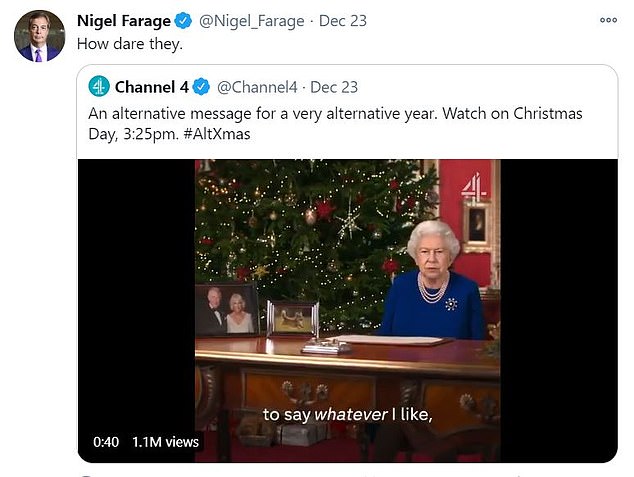 Outraged viewers, including politician Nigel Farage, took to Twitter to share their anger at the broadcast, with one branding it ‘disgusting’

But not all the viewers were impressed, including politician Nigel Farage who tweeted ‘How dare they’ in response to the video.

Others took to Twitter to share their outrage, with one writing: ‘Disgusting. The Queen has been steadfast in her duty and still going strong. God save the Queen.’

‘I’m no royalist really but The Queen gets it right every time and the public rightly respect and admire her,’ another said. ‘Channel 4’s ludicrously smart “deep fake” alternative message is a million miles away from the public mood – and not nearly as clever or funny as they think it is.’

During the controversial four-minute broadcast, a spoof Elizabeth II, said: ‘One thing that has sustained many of us is our families, which is why I was so saddened by the departure of Harry and Meghan. 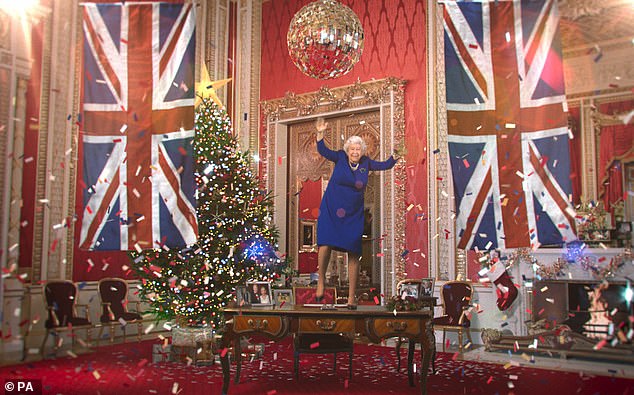 The Christmas message included jibes aimed at Prince Andrew, the Duke and Duchess of Sussex and Boris Johnson 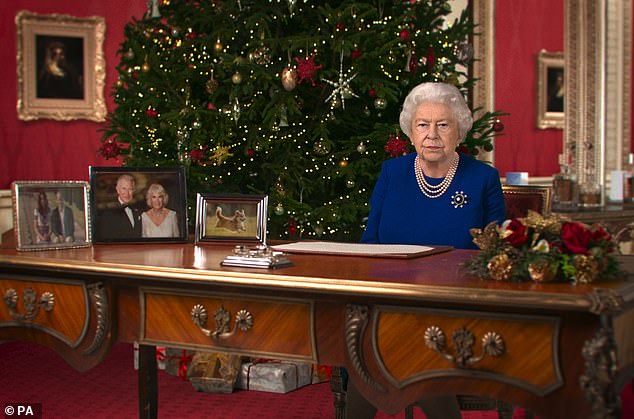 ‘There are few things more hurtful than someone telling you they prefer the company of Canadians. But at least I still have my beloved Andrew close by, it seems unlikely he’ll be heading to North America anytime soon.’

The alternative Christmas message offers a stark warning about misinformation and fake news.

Some people on Twitter acknowledged the importance of the channel’s message, with one posting: ‘The Queen deepfake was in bad taste but that I feel in five years Channel 4 will be ultimately vindicated in using such provocative ways to warn us about its capabilities.’

The artificially rendered version of the monarch, created by visual effects studio Framestore, showed the fake Queen sharing her thoughts on the departure of Harry and Meghan from the UK, and the scandal surrounding the Duke of York and his connection to convicted sex offender Jeffrey Epstein.

She also perform a TikTok dance routine and reveals her penchant for ‘Netflix and Phil’ with her husband the Duke of Edinburgh.

During the broadcast she added: ‘2020 has also been a year of heroes, such as our brave NHS workers, many of whom were forced to take incredible risks – like treating Boris Johnson – knowing at any time, as a result, they too could become pregnant.’

Pictures of her family members surrounded her while she made her address. 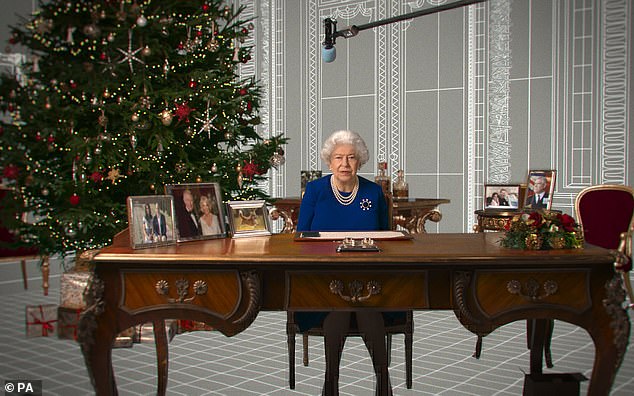 Deepfake technology has become increasingly prevalent over recent years and can be used to create convincing but completely manufactured video content of high-profile figures, most notably of former US president Barack Obama, who has been the subject of a number of deepfake videos.

The artificial rendering of the Queen, devised by special effects creatives at Framestore, was directed by William Bartlett, and Miss Stephenson, 48, read a script by James Kettle.

The end of the message shows the artificially created images flickering before disappearing to reveal the green screen used to manufacture images of Buckingham Palace and show it was in fact Miss Stephenson portraying the Queen.

The actress said: ‘I have an intense fascination with deepfake technology. For years I have studied people to impersonate them for TV, but now I can truly become them.

‘As an actress it is thrilling but it is also terrifying if you consider how this could be used in other contexts.’

Channel 4’s alternative Christmas message aired opposite the BBC’s broadcast of the Queen’s official annual televised message to the nation.

Pevious version have been delivered by Doreen and Neville Lawrence, John Bercow and Quentin Crisp.

Ian Katz, director of programmes at Channel 4, said: ‘Deepfake technology is the frightening new frontier in the battle between misinformation and truth. 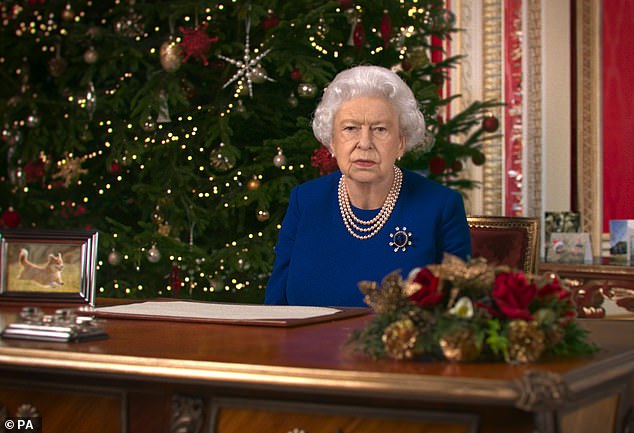 ‘This year’s Alternative Christmas Address – seemingly delivered by one of the most familiar and trusted figures in the nation – is a powerful reminder that we can no longer trust our own eyes.’

Director Bartlett said: ‘This was a great project to be asked to direct.

‘Deepfake is an interesting spin-off from the recent advances made in machine learning and AI and, while it is a powerful new technique for image-makers everywhere, it is also a tool that can be used to misrepresent and deceive.

‘With Channel 4, we wanted to create a sequence that is hopefully entertaining enough that it will be seen by a lot of people and thereby spreads the very real message that images cannot always be trusted.’