OSHA SUSPENDS enforcement of Biden’s sweeping vaccine mandates for private companies and $13,653 fines after it was blocked by appeals court

The Occupational Safety and Health Administration (OSHA) suspended implementation of its order requiring Covid-19 vaccines for private companies after a federal court blocked the measure.

OSHA announced Wednesday that it was ceasing all enforcement of the measure of the emergency order, which ordered companies with 100 or more employees to require vaccines or weekly Covid-19 testing, or face a maximum of $136,532 in fines, $13,653 per violation.

‘While OSHA remains confident in its authority to protect workers in emergencies, OSHA has suspended activities related to the implementation and enforcement of the ETS pending future developments in the litigation,’ the OSHA website said.

The rule is set to encompass 84 million workers, and employers could face fines for ‘willful violations.’

The announcement came after the 5th Circuit Court of Appeals in New Orleans upheld a stay on a ruling ordering OSHA to ‘take no steps to implement or enforce’ the emergency order ‘until further court order.’

Biden ordered companies with 100 or more employees to require vaccines or weekly Covid-19 testing, or face a maximum of $136,532 in fines, $13,653 per violation

Vaccine mandates have been highly controversial throughout the US

Circuit Court Judge Kurt Engelhardt wrote in the prevailing opinion that the mandate goes too far, and that he has ‘grave’ concerns about whether the edict is legal or constitutional.

‘The mandate is staggeringly overbroad,’ the opinion said. ‘The mandate is a one-size-fits-all sledgehammer that makes hardly any attempt to account for differences in workplaces (and workers).’

Meanwhile, the Department of Justice (DOJ) promised to ‘vigorously defend’ Biden’s vaccine mandate after it was held up by federal court.

The Biden administration has argued the mandate is imperative for saving lives, at a time when over 1,000 deaths are still attributed to Covid-19 each day.

At least 27 states have filed legal challenges in at least six federal appeals courts after OSHA released its rules on November 4. 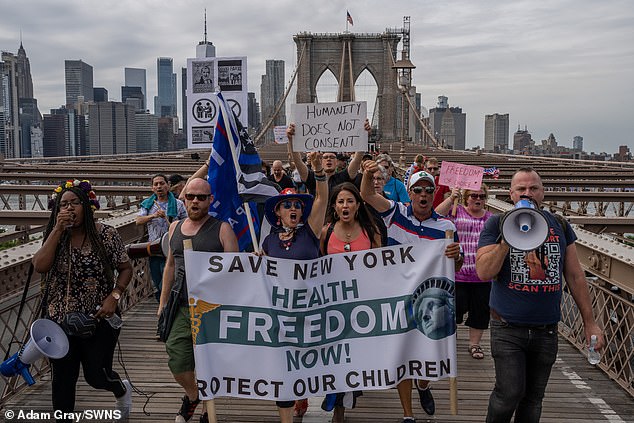 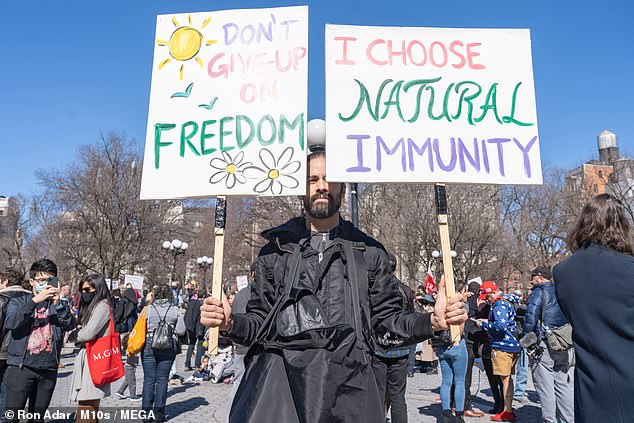 Four out of five Americans age 12 and up have had at least one Covid-19 shot. Of all ages, about 69% of Americans have had one jab and 59% are fully vaccinated. Nearly 31 million people have gotten their booster shot since August, when a third vaccine dose was recommended for those with compromised immune systems.

Hours earlier, all 50 Senate Republicans introduced a disapproval resolution against the mandate. Now, they say they’ll continue to fight for OSHA to permanently give up on the rule.

‘While I am pleased with the actions taken by the court and that OSHA has subsequently suspended President Biden’s unconstitutional vaccine mandate for now, I will continue fighting to put a full stop to his efforts to fire Americans for choosing to not get the vaccine,’ Sen. Roger Marshall, R-Kansas said in a statement.

While the GOP resolution is unlikely to pass Congress where Democrats control both houses, it could serve as political fodder for Republicans seeking to unseat vulnerable Democrats in the midterm elections. All senators will have to go on record being in favor or against sweeping vaccine mandates coming down from the federal level.