Origin of ‘ghost particles’ is FOUND: Tiny objects that pass through our bodies and planets undetected are emitted from galactic nuclei fed by supermassive black holes in deep space

Deep space ‘ghost particles’ likely originate from galactic nuclei fed by supermassive black holes, according to a new study that could unravel the mystery of these subatomic particles that formed before the universe.

Ghost particles, or neutrinos, have baffled scientists since they were first discovered in 1956 because they have no mass and barely interact with matter.

These tiny particles are without an electrical charge and race through the universe almost entirely unaffected by objects or natural forces, but they are the second most common particles Earth after photons.

The galactic nuclei, known as blazars, are galaxies with colossal black holes at their center and are positioned with their jets pointed directly at Earth.

And they found 10 of 19 of the neutrino hotspots were from blazars.

The mission to unravel the mystery of ghost particles is vital because it will provide a better understanding to how matter evolved from simple particles into complex particles that created everything around us.

At the center of most galaxies, including our own, sits a supermassive black hole that creates a disk of gas, dust and stellar debris around it.

As material in the disk falls toward the black hole, its gravitational energy can be transformed into light, making the centers of these galaxies very bright and resulting in them being called active galactic nuclei (AGN).

When a galaxy is situated in a way that its jets point toward Earth it is called a blazar and this is the running theory of what produces ghost particles.

This conclusion was determined by researchers who collected data from the IceCube Neutrino Observatory in Antarctica, which is the most sensitive neutrino detector on Earth, from 2008 and 2015. 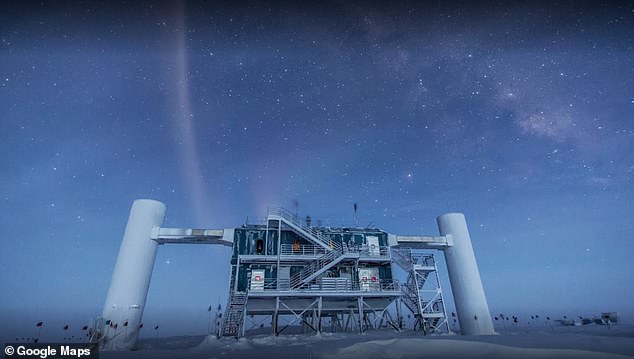 This was then cross-referenced with BZCat, a catalog of more than 3,500 objects that are likely blazars.

The results showed that 10 out of the 19 IceCube hotspots located in the southern sky likely originated from blazars.

Dr Andrea Tramacere, a researcher in the Department of Astronomy at the University of Geneva, said in a statement: ‘The discovery of these high-energy neutrino factories represents a major milestone for astrophysics.

‘It places us a step forward in solving the century-old mystery of the origin of cosmic rays.’

Scientists have been attempting to study the elusive particles since they were first predicted by Wolfgang Pauli in 1931.

Many believe they may hold the key to understanding parts of the universe that remain otherwise hidden from our view, like dark matter and dark energy.

The high-energy neutrino was first detected on September 22, 2017 by the IceCube observatory, a huge facility sunk a mile beneath the South Pole.

Here, a grid of more than 5,000 super-sensitive sensors picked up the characteristic blue ‘Cherenkov’ light emitted as the neutrino interacted with the ice.

The neutrino is thought to have been created by high-energy cosmic rays from the jets interacting with nearby material.

Professor Paul O’Brien, a member of the international team of astronomers from the University of Leicester, said: ‘Neutrinos rarely interact with matter.

‘To detect them at all from the cosmos is amazing, but to have a possible source identified is a triumph.

‘This result will allow us to study the most distant, powerful energy sources in the universe in a completely new way.’