A £10,000 fine has been issued to the organisers of a gypsy funeral for their ‘total disrespect’ to coronavirus rules after a large procession of 150 mourners attended.

Officers in riot gear were deployed after around 150 mourners turned out in Kettering, Northamptonshire, for the funeral of Joe Rooney.

The 47-year-old, known as ‘Gypsy Joe’, was killed in a car crash when his Audi A8 ploughed into a tree on October 25.

Horse-drawn carriages with Irish flags led the group of travellers on their journey to St Edward’s Roman Catholic Church followed by a cortege of seven Rolls Royces.

Photographs taken at the scene show crowds ignoring social distancing guidelines as they followed the coffin to the church along London Road at 9am. 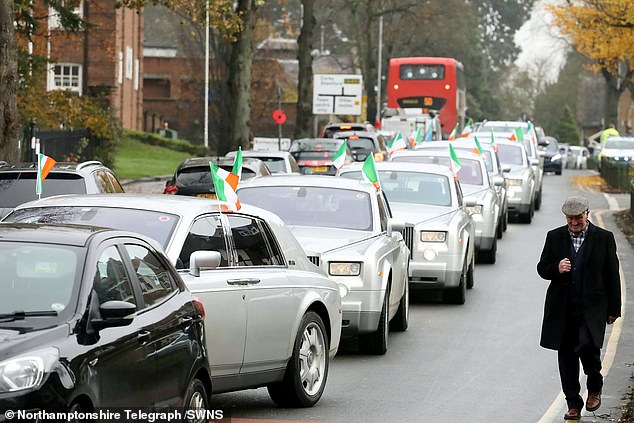 The procession was even given a police escort along the route and officers put in roadblocks to help the travellers as they brought the town centre to a standstill.

But Northamptonshire Police announced they were slapping the family with a £10,000 fine for their ‘total disrespect’ of Covid-19 restrictions.

The force had previously been criticised for not being robust enough in enforcing the guidelines, which restricts funerals to a 30 person limit in England.

Chief Constable Nick Adderley, said: ‘Throughout this global pandemic, I have heard so many heart-wrenching stories from people who have had to bury their loved-ones in really difficult and harrowing circumstances.

‘There have been limited numbers allowed, people who have been unable to attend and say goodbye, social distancing enforced throughout the service, and the opportunity to have a proper wake to celebrate that person’s life not allowed. 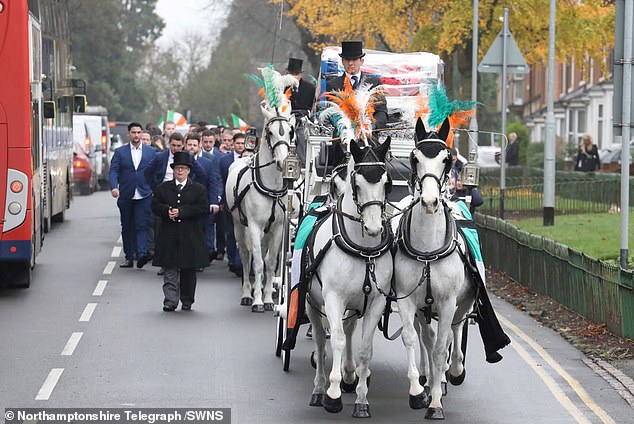 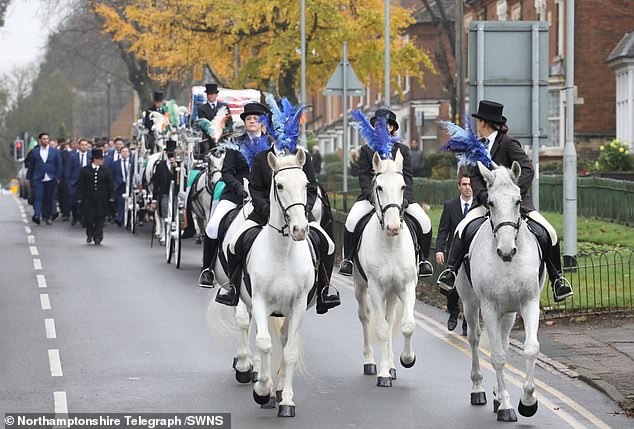 The force, which deployed 60 officers in riot gear, had previously been criticised for not being robust enough in enforcing Covid-19 guidelines

‘These sacrifices have been incredibly hard for people to make but they have made them in the interests of protecting each other and their communities from a deadly virus that has killed more than one million people worldwide.

‘It is then exceptionally frustrating when we see a group of people with no regard for other people’s safety, completely flouting the restrictions and having the type of funeral many people would have loved to have had but have been unable to hold, simply because they think they are above the law.

‘While I of course sympathise with anyone who has lost a loved one, it cannot be one rule for some people and another rule for others, and no one is above the law.

‘This is why Northamptonshire Police is seeking to issue its first £10,000 fine to the organisers of this funeral for their total disrespect of the restrictions put in place to keep us all safe.

‘This may seem like a harsh course of action to some but I do not apologise whatsoever when I have seen so many painful sacrifices made throughout this pandemic by law-abiding citizens I have a duty towards.’ 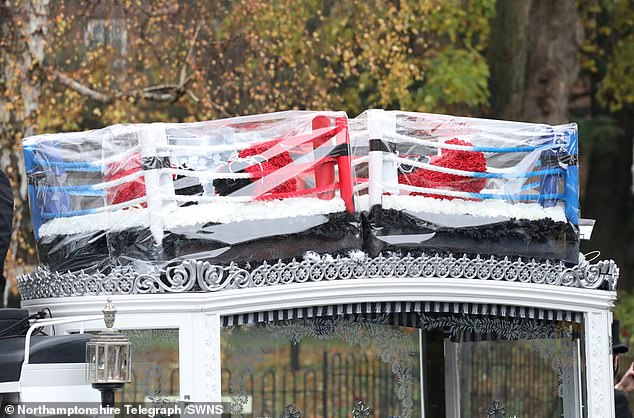 The 47-year-old, known across Corby as ‘Gypsy Joe’, died in a crash between Stanion and Geddington last month 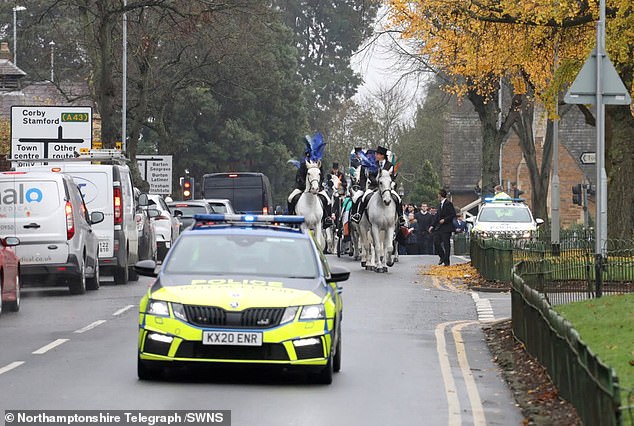 The Chief Constable later maintained that he was ‘content’ they dealt with the matter in the’ most appropriate way’ after it emerged 60 officers were ready to storm the wake in full riot gear.

He said officers turned a number of people away from the wake and prevented people from going into the marquee which was set up in a field.

He added: ‘We did meet with the organisers prior to the funeral itself and we were assured that they were going to abide by the rules and they themselves are saying that they were taken by surprise by the number of people that attended.

‘It’s fair to say that even we were surprised by the number of people that attended the crematorium and then tried to attempt to go onto a wake where there were hundreds of people trying to get onto a field and enjoy that celebration of life.

‘My sympathy goes out to the family but the reality is that we have a broader issue here and that’s about keeping the broader community safe.’

The force had previously said they were ‘engaging with mourners’ so that they could pay their respects to the popular Irish traveller.

But dozens or residents complained after the large crowd descended on the town centre on Monday, walking to the church side-by-side with no social distancing.

Responding to public criticism, the Chief Constable added: ‘I am satisfied now that we are actively pursuing the organiser of that funeral and we are looking to issue that individual – all those individuals – with £10,000 fines.

‘This is the balance we need to try and achieve. I am satisfied that we have struck the right balance and that will not be to everyone’s satisfaction, I get that.

‘I am content that under the circumstances, under the resources that were available, under the threat present that we actually dealt with that in the most appropriate way.’

What are the current rules for funerals?

According to government guidelines, funerals can continue to take place while minimising the risk of infection.

Ceremonies must have no more than 30 people attending, whether indoors or outdoors – but this does not include staff.

In some cases, there may be fewer than 30 people allowed if the premises cannot safely accommodate the space required for social distancing.

Ceremonial events linked to the funeral such as wakes, stone setting or ash scattering must have no more than 15 people attending. This includes both indoors and outdoors and also does not include people who are working.

But if the event is taking place in a private dwelling, such as a private garden, only members of one household or support bubble can attend.

People are required to wear a face-covering and avoid singing, chanting or raising their voice.