Celebrities such as Oprah and current Disney CEO, Robert Iger, paid heartfelt tributes to the late Barbara Walters, who passed away on Friday in her New York home at 93.

The renowned talk show host, 68, sent a tribute by attributing her own success in television to Walters, and labeled the TV icon ‘a Trailblazer.’

Iger jumped to onto his Twitter page to share the saddening news, along with penning a touching tribute, calling the iconic journalist ‘a true legend.’

Touching tribute: A number of celebrities, such as Oprah Winfrey, 68, paid tributes to the late TV journalist, Barbara Walters, who passed away in her New York home on Friday at the age of 93

Oprah uploaded a throwback photo of herself posing next to Barbara, along with writing a short message to pay tribute to the late news anchor.

‘Without Barbara Walters there wouldn’t have been me-nor any woman you see on evening, morning, and daily news. She was indeed a Trailblazer.’

The former Oprah Winfrey Show host revealed that, ‘I did my very first television audition with her in mind the whole time.’ 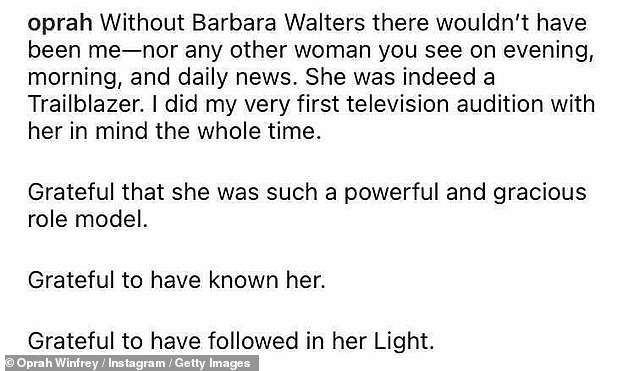 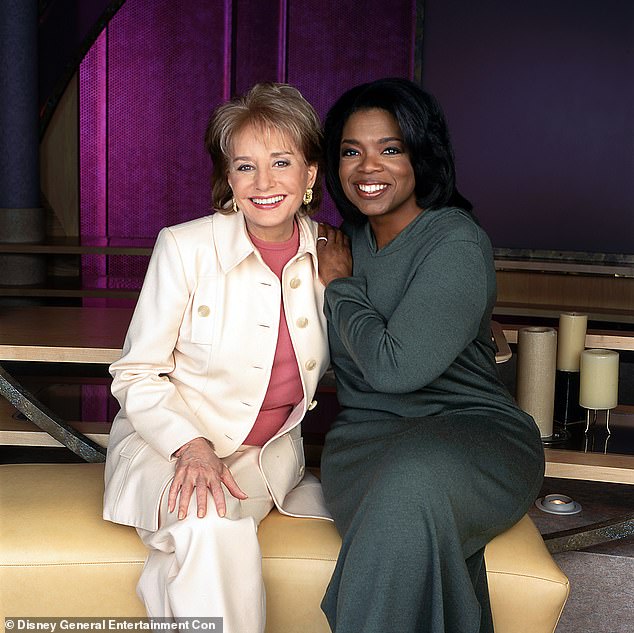 A ‘Trailblazer’: Oprah Winfrey also penned a tribute to the late journalist on Instagram on Friday, and revealed that she did her ‘first television audition’ with Walters ‘in mind the whole time’ 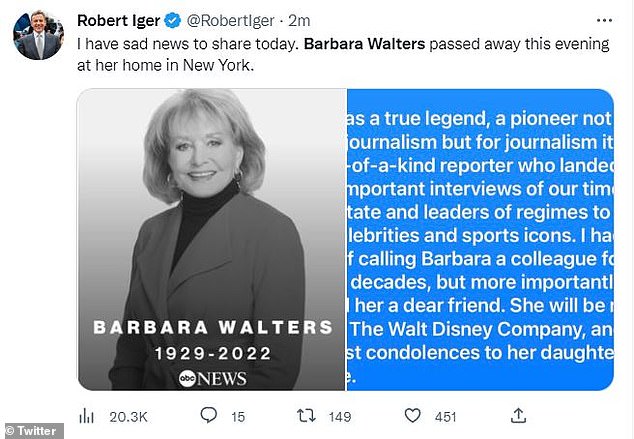 Sad news: Disney CEO, Robert Iger, revealed that the TV icon had passed away in her New York home by uploading a tweet on Friday 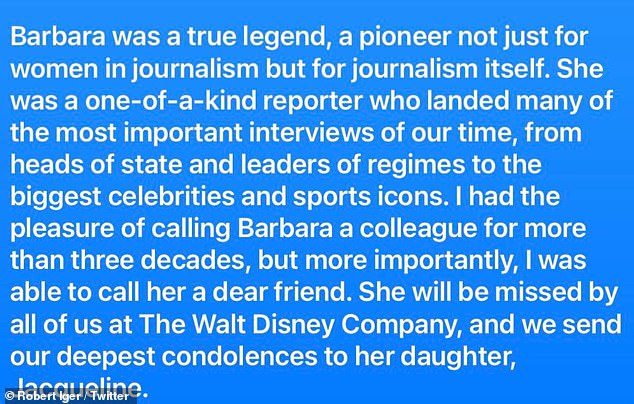 A message: The CEO also typed out a message to add into his tribute and called the journalist not only ‘a pioneer’ but also a ‘dear friend’

Robert uploaded a tweet and typed, ‘I have sad news to share today. Barbara Walters passed away this evening at her home in New York.’

He added a black and white photo of the talented journalist, who co-founded The View, alongside a statement he had written on his own. ‘Barbara was a true legend, a pioneer not just for women in journalism but for journalism itself.’

The current Disney CEO also typed that Walters, who was the first female anchor in evening news, was a ‘one-of-a-kind reporter who landed many of the most important interviews of our time.’

‘I had the pleasure of calling Barbara a colleague for more than three decades, but most importantly, I was able to call her a dear friend. She will be missed by all of us at The Walt Disney Company, and we send our deepest condolences to her daughter, Jacqueline.’ 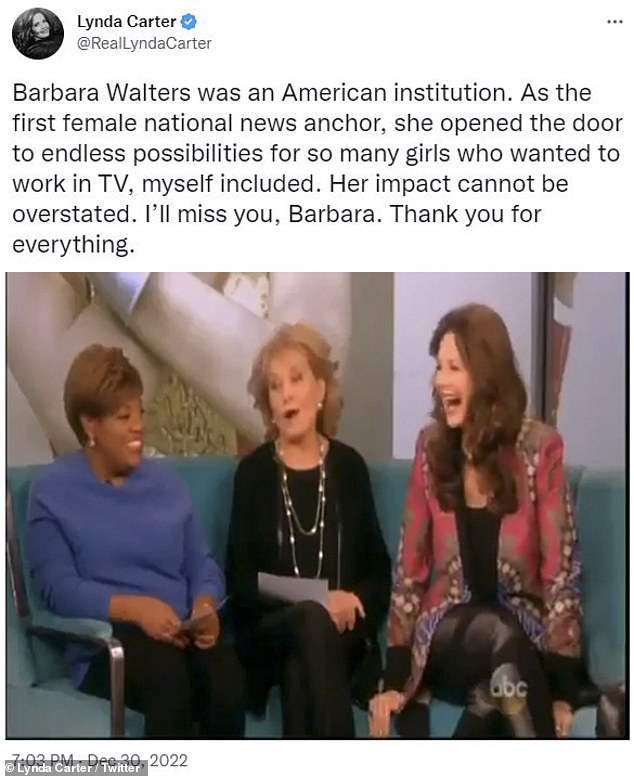 She will be missed: Wonder Woman actress, Lynda Carter, also uploaded a tribute on Twitter, along with a photo of herself with the late journalist during a previous interview that aired on ABC 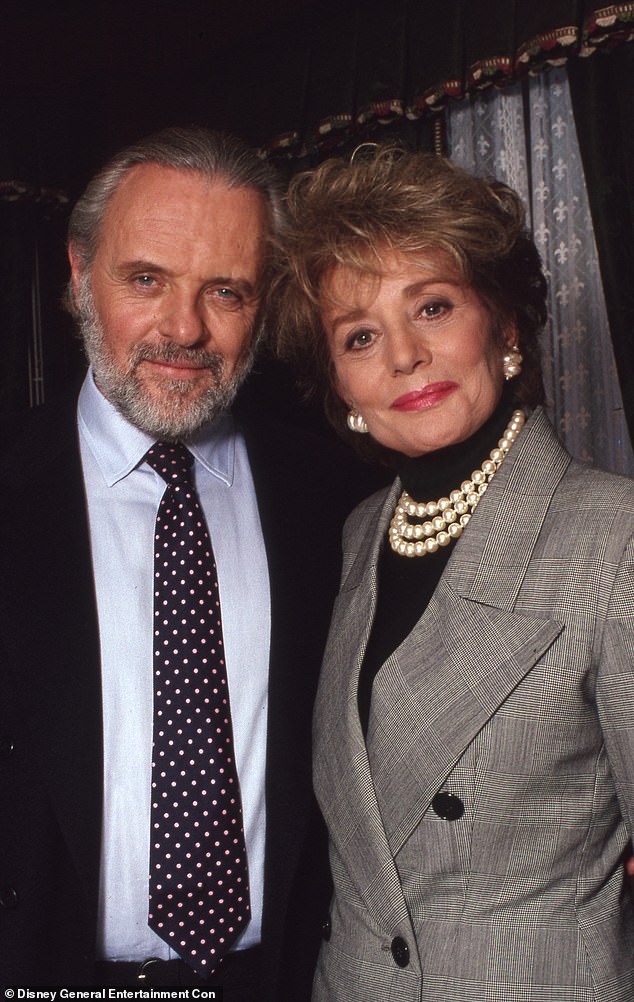 Sending condolensces: Sir Anthony Hopkins uploaded a throwback photo of himself with the late TV personality from his appearance on the Barbara Walters Special in 1992

Wonder Woman actress, Lynda Carter, also expressed a few words on Twitter not long after news of her death had surfaced.

In her tweet, the talented star called Barbara ‘an American institution. As the first female national news anchor, she opened the door to endless possibilities for so many girls who wanted to work in TV, myself included.’

She further added that, ‘Her impact cannot be overstated. I’ll miss you, Barbara. Thank you for everything.’

Underneath her message, Lynda added a photo of herself during an interview with Barbara on what appeared to be The View as they shared a heartwarming laugh together.

Sir Anthony Hopkins, known for his roles in successful films such as The Silence Of The Lambs, also shared a heartfelt tribute to the TV personality.  On Instagram, the actor uploaded a throwback photo as he posed for a quick picture with the talented journalist as he made an appearance on the Barbara Walters Special in 1992.

He added a short caption, writing out, ‘My condolences to Barbara’s family and friends. RIP,’ followed by a dove emoji. 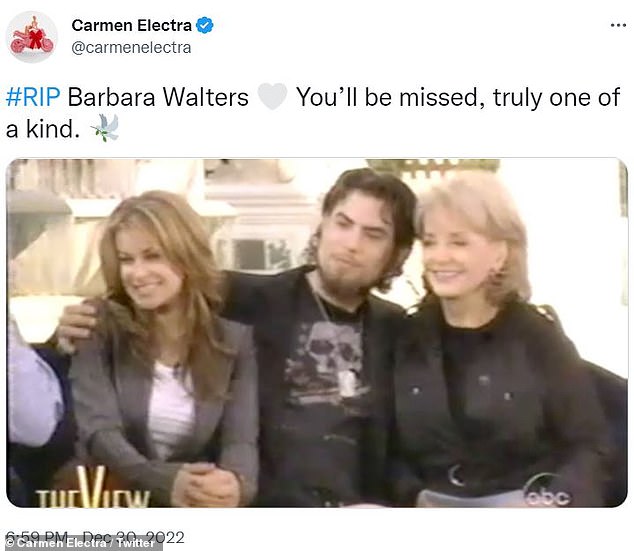 ‘One-of-a-kind’: Carmen Electra shared a snap of herself posing with Barbara during an interview and expressed that Barbara was ‘truly one of a kind’ 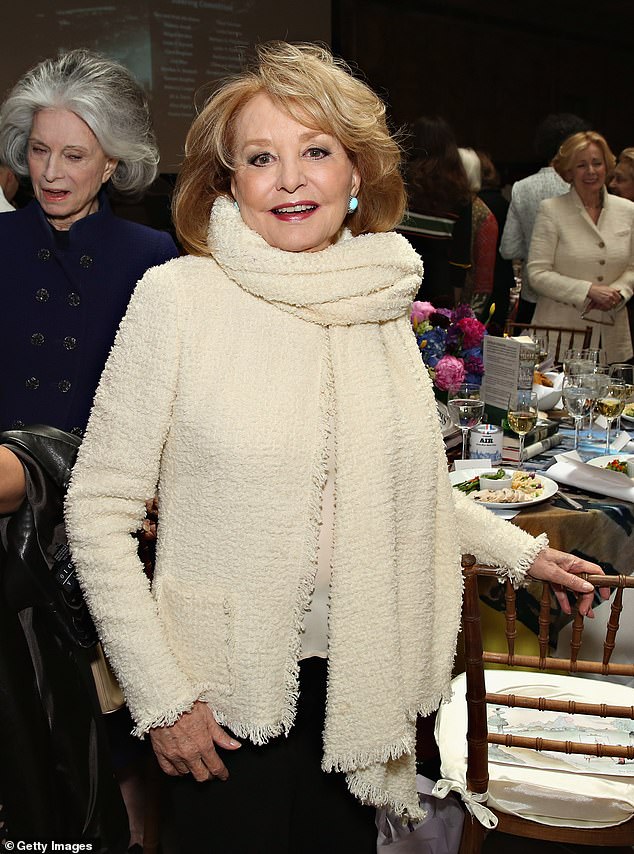 A loss: Model April Love Geary reposted the news onto her Instagram story, along with the caption, ‘NOOOOO!!! The OG Bad B****h!!!!!!!

‘A true pro’: Fellow journalist, Dan Rather, expressed that Walters was a ‘true pro,’ along with expressing that, ‘she will be deeply missed’

Baywatch actress, Carmen Electra, shared a tweet on Friday by penning, ‘#RIP Barbara Walters. You’ll be missed, truly one of a kind.’

She then added a photo of herself on The View in the past as she took a picture with Barbara.

Model April Love Geary reposted the news of the legendary news anchor’s death onto her Instagram story that showcased a photo of the star attending an event in 2016 in New York City.

April, who is currently engaged to singer Robin Thicke, expressed her shock by typing out in the caption, ‘NOOOOO!!! The OG Bad B****h!!!!!!!’

Fellow American journalist, Dan Rather, wrote out in a tweet that, ‘The world of journalism has lot a pillar of professionalism, courage, and integrity. Barbara Walters as a trailblazer and a true pro.’

The CBS anchorman added, ‘She outworked, out-thought, and out-hustled her competitors. She left the world the better for it. She will be deeply missed. RIP.’ 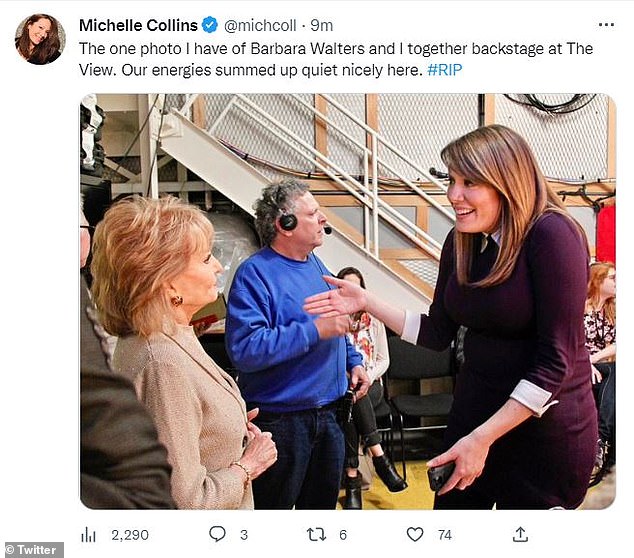 Former co-workers: Comedian and talk show host, Michelle Collins, worked as a co-host on The View from 2015 until 2016

‘Grateful’: Michelle recalled in a thread about working on The View and having the chance to ‘have lunch’ with Barbara was ‘one of the first rites of passage’ 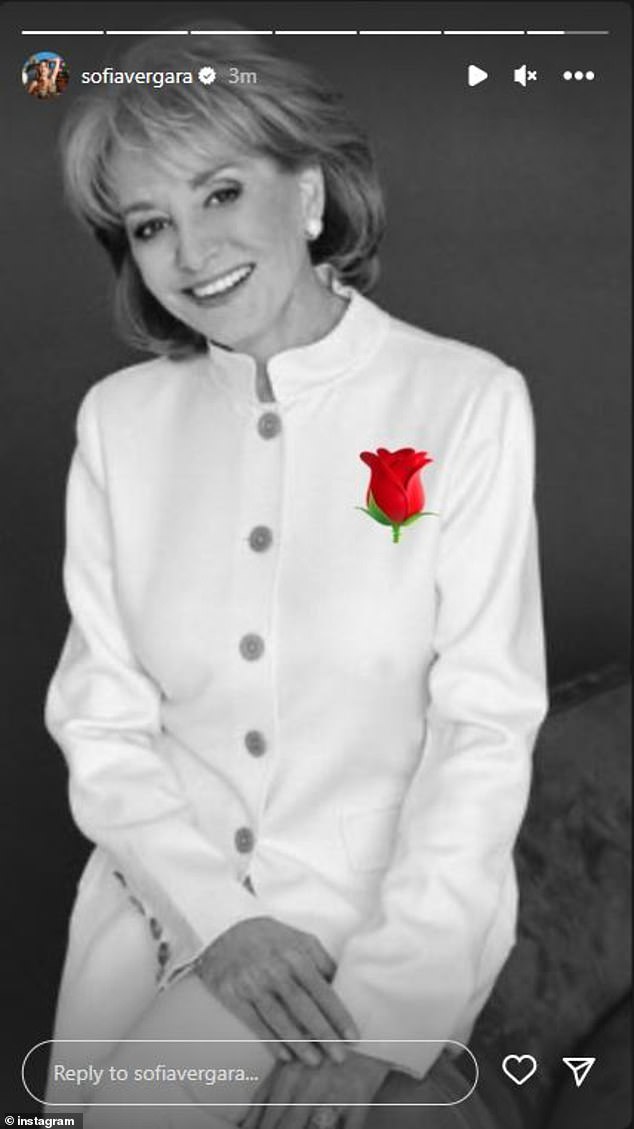 Remembering a legend: Modern Family alum, Sofia Vergara, uploaded a photo of the late journalist and added a red rose emoji as tribute to the talented star