The opponent of a boxer who tragically died after their fight has admitted that he is having suicidal thoughts due to vile abuse received online following the bout.

South African boxer Simiso Buthelezi died at the age of 24 earlier this week, two days after he was filmed disorientated and swinging into thin air during a title fight last weekend.

He was receiving medical treatment after his WBF African lightweight title fight against Siphesihle Mntungwa was waved off in the final seconds of the last round.

Buthelezi was seemingly cruising towards victory and had his opponent in deep trouble when he sent him through the ropes with a blistering combination.

Mntungwa bravely fought on but as he returned to his feet, the fight took a worrying turn for the worst, as Buthelezi moved his focus away from his rival and started moving towards the corner of the ring, throwing punches into empty space.

A shocked Mntungwa appeared hesitant to pounce on Buthelezi and the referee was quick to step in and stop the contest in dramatic circumstances.

Very scary in South Africa please ?? for Simiso Buthelezi (4-1). At 2:43 of the 10th & final round, Siphesihle Mntungwa (7-1-2) falls through the ropes but then Buthelezi appears to lose his understanding of the present situation. Mntungwa takes the WBF African lightweight title pic.twitter.com/YhfCI623LB

Buthelezi was later confirmed to be receiving medical attention in Durban but on Tuesday night, he passed away.

Mntungwa has since revealed he is coming to terms with what happened in the ring and he has received vitriolic abuse online – with trolls branding him a ‘killer’.

‘I came into heavy criticism and received insults on social media platforms when Simiso was hospitalised; it has taken another level now that he has passed away,’ he told Sowetan Live.

‘I just can’t take it anymore. One thing is left for me – I am going to kill myself. Even my neighbours have posted very ugly messages about me on social media. I am no longer safe. 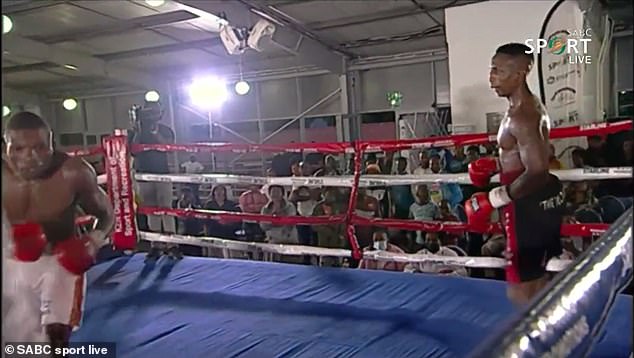 ‘I did not kill Simiso; we may have been involved in a boxing fight but it was not a matter of life and death. All I wanted was to win the title, which maybe was going to help change my life and that of my family.

‘I am the only one working at home, where I stay with my young brother, my aunt and her children. My mother died when I was four; my father is still alive but we don’t stay with him.

‘So, winning that title was going to help me financially. But people have branded me a killer. It could have been me. 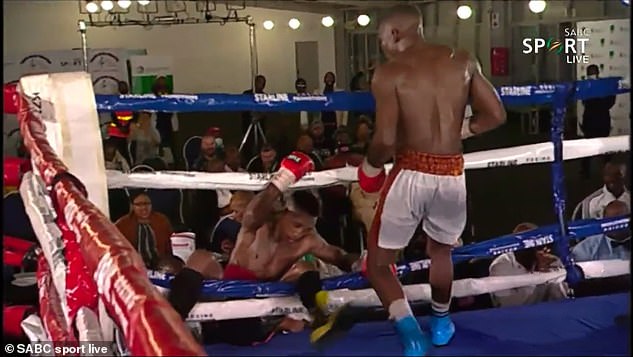 ‘Without doubt Simiso’s family is going through pain like any other family. Simiso has just graduated [with a degree in botany and zoology]. Who knows his family may have even sold their cows to make sure he finished his studies. It is sad and very painful, but I did not go in that boxing with an intention to kill him.’

Mntungwa received the bulk of the heavy blows throughout the fight, and it has been suggested that Buthelezi may have entered the ring with a pre-existing injury.

‘He is under pressure from social media messages,’ Mntungwa’s trainer, Mmeli Mkhize, said. ‘People have their own beliefs such as claims that we used umuthi and that is untrue. We will not even be able to attend the funeral because we are scared.’

For confidential support call the Samaritans on 116123 or visit a local Samaritans branch. See www.samaritans.org for details.