Ah, Earth Day: that one day a year devoted to patting ourselves on the back for recycling our milk jugs and installing LED bulbs. But most of us spend as much time thinking about the Earth on Earth Day as we do woodchucks on Feb. 2.

The focus of last year’s Earth Day was to end the use of single-use plastics. As a result, you can find me at restaurants sucking pop through a cardboard straw while grimacing at the taste. I don’t like to see an animal in the ocean choking on my plastics anymore than the next person, but we’ve got bigger fish to fry.

The planet now finds itself in grave danger. We’re way beyond holding a day once a year to raise awareness on the issue. If your house is on fire, you’re not going to ask the family, “Any ideas on how we should celebrate Fire Safety Day this year?”

My family lives in a passive solar house. We drive electric cars and gloat about how much electricity the solar panels on our roof are producing.

But the truth is, we’re not environmentalists — not in any meaningful sense. We buy stupid things at dollar stores, we fly on airplanes, and we eat more hamburgers than Ronald McDonald. Our primary motivation for investing in electric vehicles and solar panels was the tens of thousands of dollars it would put in our pockets over the course of their lifetime, not because we have the hutzpah to do the right thing. I wish we did. 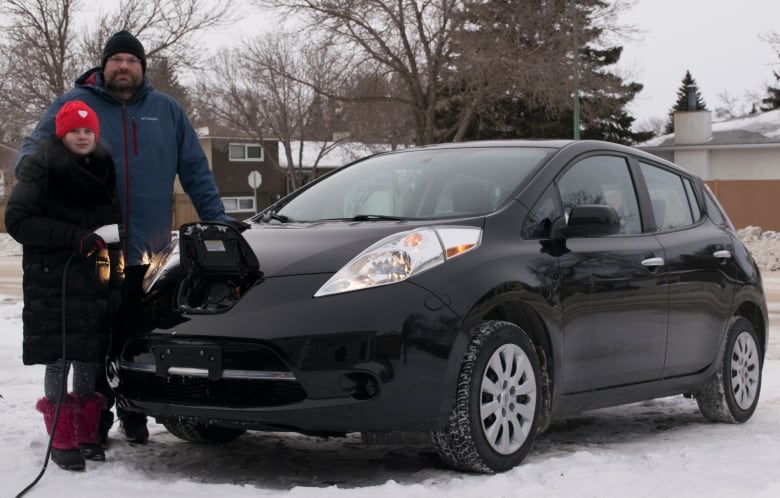 James Whittingham (right) drives his family around, including his daughter Amelia Whittingham (left), in an all-electric 2013 Nissan LEAF. (Aiden Whittingham)

But something happened to me recently that might yet turn me into an environmentalist.

I was driving my son home from school and mentioned I’d heard on the radio that the last time there was this much carbon in the atmosphere, there were trees growing in Antarctica. I told him I didn’t know anything about that.

He told me how global warming is slowing ocean currents, which could have major effects not only on sea life but on life on land. He told me of other major changes the world can expect to experience should global temperatures rise by three degrees — something we’re on track to do by the end of this century. Every day heading towards that moment will only get worse.

He knew and understood everything. It was gut-wrenching to hear him say it. Climate change used to be something that would affect us way down the road. That’s not the case anymore.

In the context of the crisis at hand, Earth Day is no longer relevant. Those aboard the Titanic weren’t busy celebrating Iceberg Awareness Day as they were sinking. The time for having a special day for green-shaming and “doing our part” has passed.

Every day has to be Earth Day from now on. We have to do the hard work of educating ourselves about global warming so that politicians of all stripes respond to our concerns and act on a grand scale.

And we have to wake up to the reality that the future our children see may not be the one we see. They know what’s coming because they have to live with it. They are yearning for us to open our eyes.

Why? Because our house is on fire.

This column is part of CBC’s Opinion section. For more information about this section, please read this editor’s blog and our FAQ.

Interested in writing for us? We accept pitches for opinion and point-of-view pieces from Saskatchewan residents who want to share their thoughts on the news of the day, issues affecting their community or who have a compelling personal story to share. No need to be a professional writer! Email sasknews@cbc.ca with your idea.