‘Appalling’ lack of women in top jobs: Anger over lack of progress as report finds only nine FTSE 100 companies currently have female bosses

Britain’s biggest listed firms have been accused of an ‘appalling’ lack of progress in promoting women to executive roles.

An annual survey found that 91 per cent of the 413 women on FTSE 100 boards are in advisory non-executive director (NED) roles.

Just 9 per cent are in executive positions – including roles such as chief executive and chief financial officer – and only nine hold the top job.

One of the few: Admiral chief exec Milena Mondini de Focatiis (pictured) is one of only nine female FTSE100 bosses

The report, by Cranfield University and EY, raised concerns that the increase in women on boards has been driven by box-ticking to meet gender representation targets.

Sue Vinnicombe, professor of women and leadership at Cranfield School of Management, said: ‘We have come a long way but just having women in NED roles is not sufficient to have an impact on the executive pipeline.

‘The lack of progress in terms of seeing women in these key executive roles is frankly appalling. For real change to happen, women simply must be in the significant decision-making roles of chief executive and chair.’

Alison Brittain, chief executive of Premier Inn owner Whitbread, is stepping down next year. But there will be another woman added to the ranks of FTSE 100 chief executives when Louise Beardmore takes the reins at United Utilities, the UK’s largest listed water company.

Meanwhile, sportswear giant JD Sports is led by interim boss Kath Smith but she will be replaced by Regis Schultz later in the year. 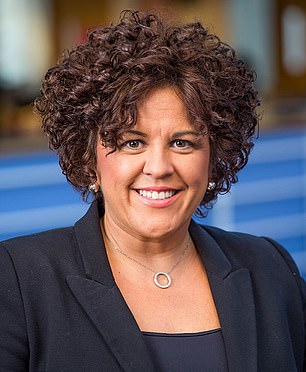 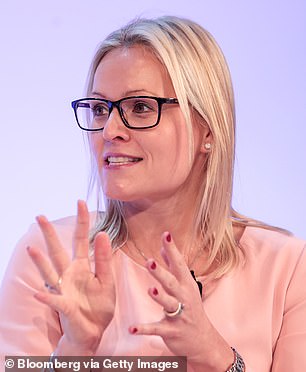 Exceptions: Louise Beardmore (left) is set to take the reins at United Utilities, while Liv Garfield (right) is boss at Severn Trent

The total of nine FTSE 100 female chief executives is just one up on last year. A woman is also chairman at 18 of the companies, with the number including Rolls-Royce’s Anita Frew and Prudential’s Baroness Vadera.

The survey showed women account for almost 40 per cent of directors on FTSE 100 boards and 39 per cent in the FTSE 250.

But while the number of female non-executive directors in the FTSE 100 rose by 15 per cent in the past year, those in executive positions increased by only 3 per cent to 36, at just 33 companies.

It means only 17 per cent of boardroom executives at the UK’s biggest 100 listed companies are women.

Some companies have done better than others at improving female board representation.

Diageo, the drinks giant, tops the list at 64 per cent, followed by JD Sports (57 per cent) and Land Securities (56 per cent).

At the other end of the scale is mining company Endeavour, where only 22 per cent of board members are women, followed by online supermarket Ocado (23 per cent). Alison Kay, managing partner for client services for accountancy giant EY, UK and Ireland, said: ‘FTSE businesses are increasingly hitting the targets set for female representation.

‘However, they are falling woefully short of the intended outcome – distributing the power and influence necessary to achieve true gender parity.

‘Companies must now dig deeper and go beyond complying with board level targets to transform their business and boost its performance.’

The report comes after the FTSE Women Leaders Review – which has set the goal for 40 per cent of board members to be women by 2025 – last week extended its scope to include the UK’s 50 largest privately held companies for the first time.