Western children are being misdiagnosed with a milk allergy with just one per cent  allergic to dairy – despite 14 per cent of parents claiming their child can’t tolerate it.

The Imperial team also found that eight in ten guideline authors reported a conflict of interest – having a possible financial relationship with formula manufacturers.

Children are being misdiagnosed with a milk allergy with just one per cent of infants allergic to dairy – despite 14 per cent of parents claiming their child can’t tolerate it. Stock image

Researchers examined nine official guidelines for cow’s milk allergy published between 2000 and 2019 from a range of organisations primarily in Europe.

WHY DOES THE RATE OF LACTOSE INTOLERANCE VARY AROUND THE WORLD?

Globally about 68 per cent of people have some degree of lactose intolerance, according to a study published in the Lancet.

The authors found the actual rate varies dramatically around the world.

Lactose intolerance and dairy/milk allergies aren’t the same but both are linked to the bodies ability to process milk based products.

At the high end – in parts of Asia and Africa up to 75 per cent have a degree of lactose intolerance.

In contrast about 28 per cent have the allergy in parts of northern Europe.

A Cornell University study found that the rate of milk tolerance is linked to places where dairy herds could be raised safely and economically.

‘The implication is that harsh climates and dangerous diseases negatively impact dairy herding and geographically restrict the availability of milk, and that humans have physiologically adapted to that,’ said evolutionary biologist Paul Sherman.

Although all mammalian infants drink their mothers’ milk, humans are the only mammals that drink as adults.

About 60 per cent of people and primarily those of Asian and African descent  stop producing lactase.

That is the enzyme required to digest milk, as they mature – which is why the rate of intolerance is higher in adults.

The team found that less than one per cent of infants had cow’s milk allergy in a recent European birth cohort study of 12,000 babies in nine countries.

The exact countries aren’t clear but it included the UK, Australia and Russia.

In addition to this, the analysis suggests the prescription of specialist formulas for babies with cow’s milk allergy had increased significantly between 2000 and 2018 without any evidence for an increase in cow’s milk allergy.

Milk allergy is most common in children under two and is categorised into two different types including IgE mediated and non-IgE mediated.

Symptoms of non-IgE mediated reactions may include vomiting, diarrhoea or excessive crying.

Researchers said the nature of these symptoms means they are often confused with normal symptoms in young babies.

‘Many of these symptoms are present normally in babies, and will get better with time,’ said Munblit.

‘Non-IgE cow’s milk allergy affects less than one per cent of infants whereas troublesome vomiting, crying or eczema each affect 15-20 per cent of babies.’

‘It can also lead to families and the NHS unnecessarily paying for expensive specialist formula,’ he added.

Guidelines came from a range of medical organisations several countries predominantly in Europe.

Seven of the nine guidelines advised breast-feeding women to cut out all dairy from their diet if their child has a suspected cow’s milk allergy.

Studies suggest less than one millionth of the protein from cow’s milk travels through to breast milk, which would be too small to trigger a reaction in most allergic children, the team said.

Eight out of ten of all guideline authors had declared a conflict of interest with formula manufacturers and therefore could be profiting from the advice. 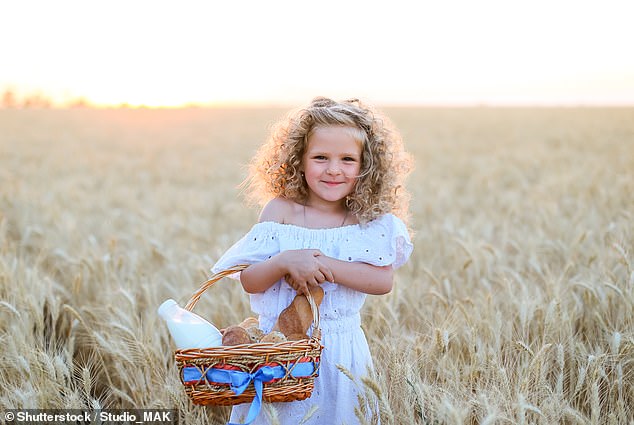 The team found that less than one per cent of infants had cow’s milk allergy in a recent European birth cohort study of 12,000 babies in nine countries including the UK, Australia and Russia. Stock image

Three guidelines were directly supported by formula manufacturers, with 81 per cent of all guideline authors reporting a conflict of interest.

WHAT IS A DAIRY ALLERGY?

A dairy allergy is when the body’s immune system reacts unusually to dairy.

Reactions to dairy, like other triggers, are usually mild, causing red rashes, itches, swelling and even vomiting.

However, they can prove deadly and lead to anaphylactic shock – which can kill in minutes.

It leads to a catastrophic drop in blood pressure and can trigger a cardiac arrest – when the heart suddenly stops working.

About 20 people in the UK die as a result of anaphylactic shock each year, according to figures.

Experts are unsure how many people have a dairy allergies, but claim they are one of the most common types of allergies.

The NHS advises patients with a dairy allergy, or allergies to other potential triggers such as peanuts, to avoid the food completely.

Dairy allergy is different to lactose intolerance, which is a common digestive problem to lactose – often found in milk.

Scientists said manufacturers could be undermining women’s confidence in breastfeeding to influence practitioners and parents to use specialised formula in place of a cheaper alternative.

‘Formula manufacturers may gain from promoting increased cow’s milk allergy diagnosis by influencing practitioners and parents to use a specialised formula in place of a cheaper formula,’ said Boyle.

He said they could also be ‘undermining women’s confidence in breastfeeding, so that specialised formula is used in place of breastmilk.

‘We must not only critically appraise our current guidelines, and dissociate the development of guidelines from those who may profit from them, but also ensure we are giving each family the best possible care by avoiding overdiagnosis of cow’s milk allergy.’

Dairy allergy was one of the earliest food allergies to be recorded – as early as ancient Greece – in a text attributed to the doctor Hippocrates.

Globally about 68 per cent of people have some degree of lactose intolerance, according to an earlier study published in the Lancet.

The authors found it varies dramatically around the world with parts of Asia and Africa seeing levels of up to 75 per cent compared to 28 per cent in parts of Europe.

This new study focused primarily on European countries, the 1 per cent intolerance figure in babies will be different in other parts of the world.

Findings were published in the JAMA Pediatrics journal.