One of the Netherlands’ best-known crime reporters is in critical condition in hospital after being repeatedly shot in what is believed to be a gangland hit.

Peter R. de Vries, known for his work in exposing the Dutch underworld, was shot in downtown Amsterdam around 7.30pm Tuesday while walking to his car following one of his regular appearances on a current affairs television show.

The 64-year-old was shot five or six times, according to Dutch media, and was rushed to hospital by air ambulance where he is now fighting for his life.

Three suspects have since been arrested – including two who were stopped in what police described as a getaway car near The Hauge, 30 miles south of Amsterdam.

Officers have not given any details on the suspects, but say one of the two arrested in the car is believed to be the gunman.

Peter R. de Vries, one of the Netherlands’ best-known crime reporters, was rushed to hospital Tuesday night after being shot in the head

‘Peter R. de Vries was shot down in Lange Leidsedwarsstraat,’ police said in a statement, referring to a street near one of the city’s largest public squares, where he had been in a television studio earlier in the evening.

Police had cordoned off the area as crowds gathered near the site where the incident took place. It was an unusually brazen attack on a journalist in the Netherlands.

De Vries was reportedly shot in the head at close range and an eyewitness said she heard five gun shots before going outside and finding the reporter lying on the floor, reports newspaper Het Parool.

She said de Vries had a lot of blood on his face and she held his hand until medics arrived to take him to the hospital.

Finance Minister Wopke Hoekstra said in Parliament he was ‘deeply shocked’ by the attack.

De Vries, 64, is known for his fearless reporting on the Netherlands’ underworld. 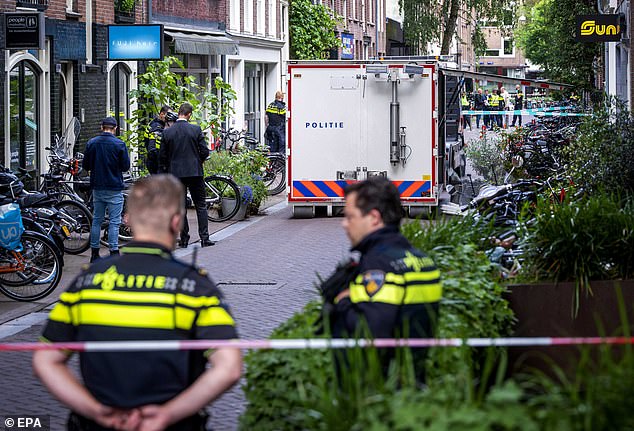 Police at the site of a shooting in Amsterdam, the Netherlands, where De Vries was injured 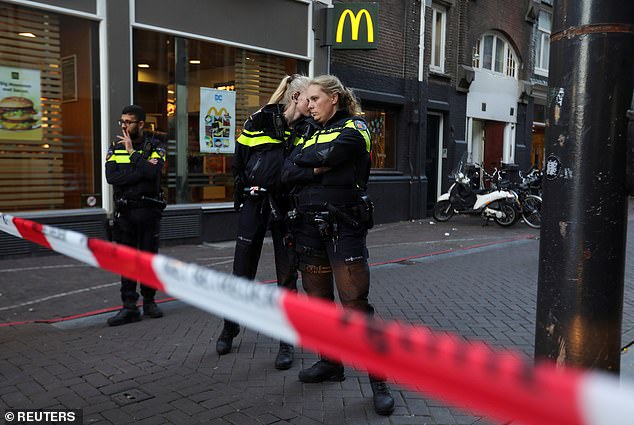 He won an International Emmy Award in 2008 for a television show he made about the disappearance of U.S. teenager Natalee Holloway while she was on holiday in the Caribbean island of Aruba in 2005.

He had been a guest at Dutch broadcaster RTL Boulevard to talk about the case of Seif Ahmed, a hairdresser who was shot dead in his car in 2019.

The broadcaster said De Vries had just left its studio in downtown Amsterdam when he was was attacked and that one of the shots hit him in the head.

Amsterdam’s Parool newspaper published an image of the scene with several people gathered around a person lying on the ground.

An alleged shooter was arrested shortly afterward, newspaper Algemeen Dagblad reported, citing anonymous sources. Police said they could neither confirm nor deny that report but they expected to update the public later Tuesday evening.

Prime Minister Mark Rutte was expected to make a statement after meeting with leading law enforcement officials in the wake of the shooting, news agency ANP reported.

‘This is what you’ve been hoping all along that doesn’t happen,’ said Thomas Bruning, general secretary of the Dutch Association of Journalists.

‘Of course it remains to be seen which activities of De Vries this is related to, but the attack took place in front of RTL Boulevard.

‘This hits journalism right in the face. Let’s hope and pray for his health.’ 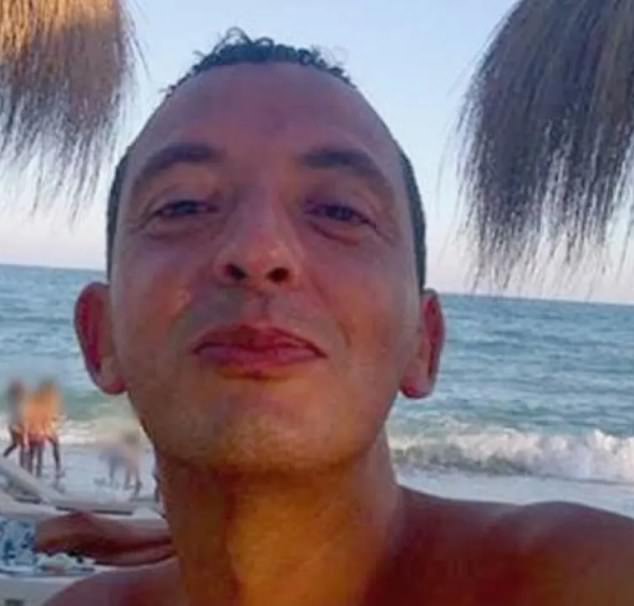 Ridouan Taghi, known as the Netherlands’ most-wanted man who is currently on trial for murder, has previously been forced to deny threatening to have De Vries killed

De Vries, 64, is a celebrity in the Netherlands, as both a frequent commentator on television crime programs and an expert crime reporter with sources in both law enforcement and the underworld.

De Vries is known in the Netherlands for investigative work on countless cases, notably following the 1983 kidnapping of beer magnate Freddy Heineken.

De Vries has been subjected to threats from the criminal underworld in the past in connection with several cases.

In 2013 Willem Holleeder, the Heineken kidnapper, was convicted of making threats against De Vries. Holleeder is currently serving a life sentence for his involvement in five murders.

In 2019 Ridouan Taghi, currently on trial for murder and drug trafficking, took the unusual step of making a public statement denying reports that he had threatened to have De Vries killed.

De Vries has been acting as a counselor, but not lawyer, to a state witness identified as Nabil B. testifying in the case against Taghi and his alleged associates.

Nabil B.’s previous lawyer was shot and killed on an Amsterdam street in September 2019.