One of Australia’s biggest cities is banning smoking cigarettes and vaping in some public areas with huge fines for those who break the rules amid growing concerns about the rapid rise of e-cigarettes and underage users.

The popularity of vaping has surged in the past year, especially in teenagers, with numbers doubling among 16-24 year olds in just 12 months.

Councillors in Perth have approved five smoke-free areas in parts of North Perth, Mount Hawthorn and Leederville to implement their public health plan.

The main streets impacted by the ban include Angove and Fitzgerald streets in North Perth, Scarborough Beach Road in Mt Hawthorn and Oxford Street in Leederville.

Anyone caught smoking or vaping in these areas faces a fine of $200, however penalties will not apply for the first six months of the ban, which comes into force today.

The City of Vincent Council mayor Emma Cole hopes the ban will encourage people to quit the habits and reduce community exposure to tobacco smoke.

‘It is our hope that we can encourage people to stop smoking, reduce relapse for those who are trying to quit and prevent young people from picking up the habit, including vaping,’ she said.

‘Vaping levels across the country are rising, especially among younger people, so the smoke-free areas will include no smoking and no vaping signage.’

The city is following Melbourne, which already imposes a smoking and vaping ban across 13 outdoor areas.

It comes after New Zealand unveiled new legislation to ban young people from ever buying cigarettes in a rolling scheme to make the entire nation of five million smoke-free.

People aged 14 and under in 2027 will never be allowed to buy cigarettes in their lifetime under Prime Minister Jacinda Ardern’s radical new laws.

Australia has hinted at a ban on cigarette sales to certain age groups by 2030 in the 2022-2030 consultation draft smoking strategy.

The strategy wants Australia to consider raising the minimum age of when you can buy tobacco, which is currently 18.

Responsibility for implementing any new policy will be a matter for state governments once the draft strategy moves through the consultation stage and is released to the public. 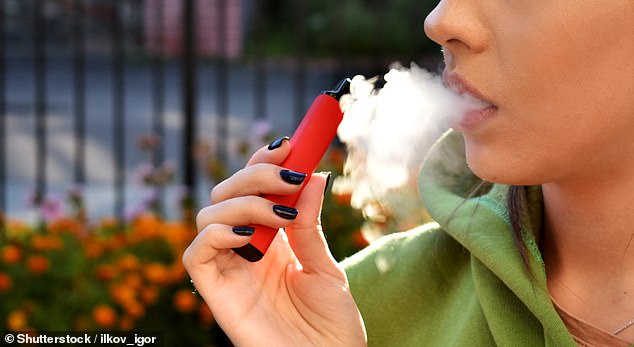 The popularity of vaping has surged in the past year, especially in teens, with numbers doubling among 16-24 year olds in just 12 months

New Zealand’s incoming age-related lifelong ban on smoking only applies to cigarettes, and does not include vaping.

And the change in attitude has coincided with a massive decline in the number of smokers, he says.

‘More kids are vaping,’ he admitted. ‘But they don’t progress to smoking.

‘That’s what going to kill them – smoking. Vaping for a few years isn’t. We don’t want them to vape, but it’s not a gateway into smoking. It’s actually a gateway out.’

He echoed the call for innovative new approaches to tackling smoking.

‘We’ve gone as far as we can with traditional tobacco control methods and the fact that smoking rates aren’t falling any further means it’s not enough,’ he said.

The proposals come as new research shows most Australians back a total ban on cigarette sales, with just 16.1 per cent believing that would be ‘a bad thing’.

More than half, 50.8 per cent, supported a phase-out, and an overwhelming majority of 61.8 per cent said it should happen within the next decade.

Director of Quit Victoria Dr Sarah White says she expects fewer retailers to stock cigarettes regardless of any ban.

‘The market might just get to a point where the retailers say, “There’s not enough people buying these products, it’s something I have to lock away, it costs me a lot to keep under my counter, we might just give it away”,’ she said.

‘I’ve talked to quite a few retailers who are saying they’re not sure whether they want to stay in the business because it’s not very profitable for them.’

Australia has most expensive cigarettes in the world, with a typical 25-pack of Marlboro costing $48.95.

Anyone who smokes a pack a day will be shelling out about $18,000 a year to feed their habit.

This has led to a surge in the black market tobacco as organised crime syndicates flood the Australian market with cheap smokes.

WHY ARE CIGARETTES SO EXPENSIVE IN AUSTRALIA?

Smokers have been slugged with five consecutive 12.5 per cent tobacco excise increases since 2013.

A further hike of that size has now been introduced on September 1.

The last Labour government first introduced the massive tax hikes. The policy was matched by Liberal Treasurer Scott Morrison in 2016. 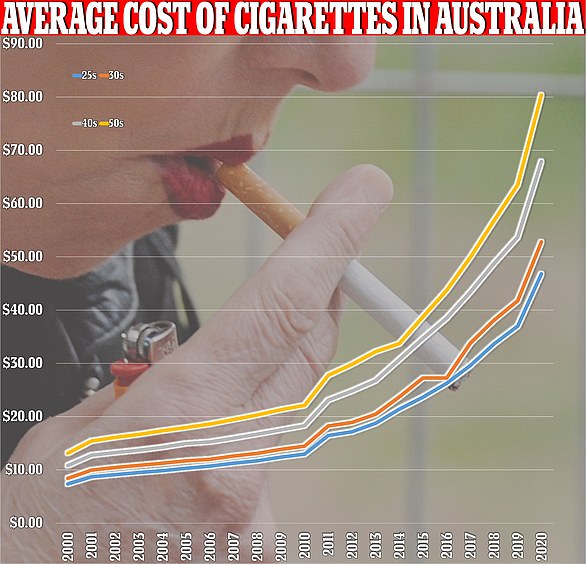 The cost of cigarettes in Australia is soaring, with an average packet costing $40

In Budget papers, Mr Morrison’s government claimed ‘one of the most effective ways to discourage smoking is to increase the price of cigarettes.

‘Increases in tobacco excise over the last two decades have contributed to significant declines in the number of people smoking daily.’

But the consumption of cigarettes rose for the first time in more than a decade in the final quarter of 2017, deviating from a long term trend.