EXPRESS INFORMER > Health & Medicine > One in TEN newborns in the US are born prematurely as rates hit record-high, report warns

A record one in ten infants were born prematurely in the US last year, a report has revealed — leaving more newborns than ever at higher risk of physical and mental problems.

Last year’s figure is the highest since records began in 2007, when less than 10.4 per cent of infants were born early.

Rising rates of obesity and underlying conditions such as type 2 diabetes as well as the strain on healthcare services due to the Covid pandemic are thought to be behind the rise.

Obese women are more likely to have underlying conditions leading to an early birth, or face complications such as pre-eclampsia, gestational hypertension and gestational diabetes. Covid pressures also led to many hospitals getting babies delivered quickly in order to free up beds.

The report, by nonprofit group March of Dimes warned the US was at a ‘critical moment’ to start pushing back preterm rates, while experts warned the country was ‘failing moms and babies’.

Mississippi had the highest preterm birth rate in the nation, at 15 per cent of all births. Louisiana had the second-highest rate, 13.5 per cent, while Alabama had the third-highest, 13.1 per cent.

America’s infant mortality rate dropped 3.7 per cent last year to 5.4 per 1,000, but experts warned this remained ‘so much higher’ than other developed countries. The UK, France, Sweden and many other European nations have significantly lower rates.

Dr Zsakeba Henderson, interim chief medical officer at March of Dimes, warned the Covid pandemic drove the record-breaking rise because of the extra strain on hospitals and the fact many had avoided care for fear of catching the virus. She added rising rates of obesity and other health conditions may also be driving the rise.

Experts told DailyMail.com that they feared preterm rates would only get worse this year, after Roe v. Wade was overturned which could lead many midwives to choose not to work in states that ban abortion.

Vital development happens in the final weeks of pregnancy up to the week-40, due date, with premature babies left at higher risk of asthma, feeding difficulties, developmental delay and mental disabilities like cerebral palsy.

America’s preterm birth rate has risen to its highest level since records began, a shocking report from March of Dimes says. About 10.5 per cent of infants are now born early, putting them at higher risk of development and mental problems. This was a rise of four per cent or 18,000 babies on 2020, with the Covid pandemic thought to be the driving force 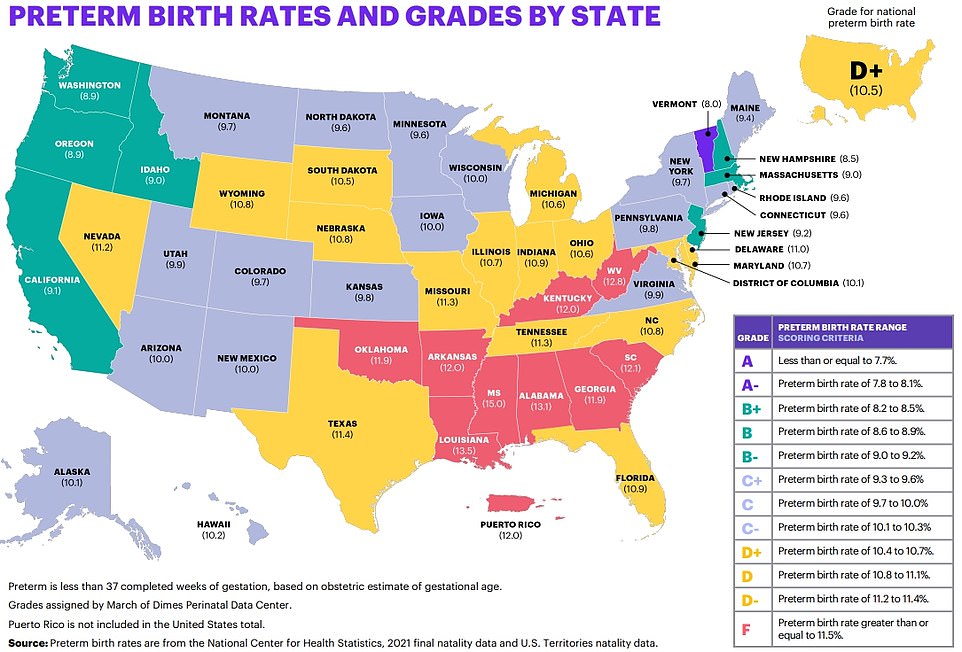 The above map shows the preterm birth rates across all US states for last year and the nation as a whole (top right). The rates are shown in brackets on each state, with the color revealing what rating they were given. A key showing how each grade was awarded is shown on the right-hand-side 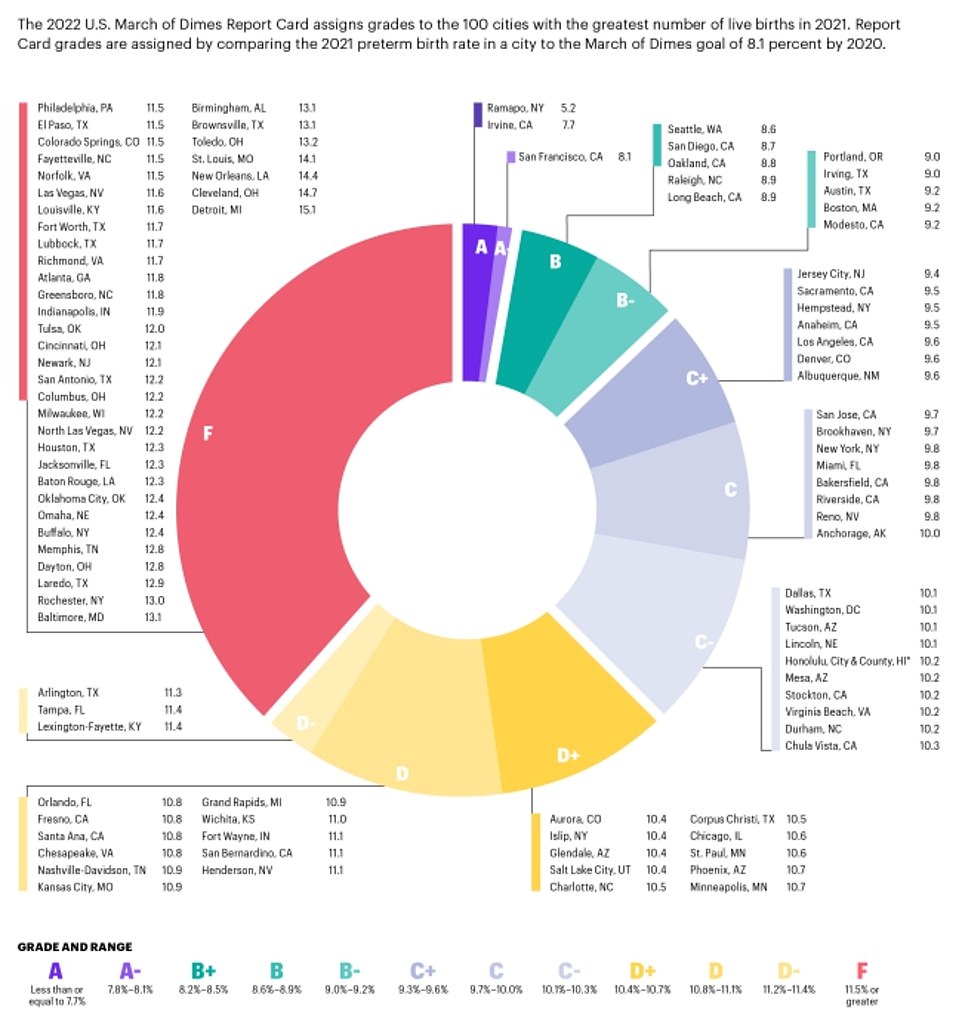 The above shows the rankings of preterm birth rates across 100 major cities in the US. It was shown that Ramapo in New York state has the lowest rate, while Detroit in Michigan has the highest

March of Dimes — a nonprofit specialising in maternal care — has suggested a 12-point action plan in the report for lowering preterm birth rates, including offering mothers-to-be longer maternity leaves and expanding Medicaid coverage.

The annual report used Centers for Disease Control and Prevention (CDC) data from across all 50 states on preterm births and infant mortalities.

‘There are too many babies being born too soon: One in 10.

US home births increased slightly in the pandemic’s second year, rising to the highest level in decades, according to a government report published Thursday.

Among almost 4 million births in 2021, nearly 52,000 occurred at home, the Centers for Disease Control and Prevention report showed. 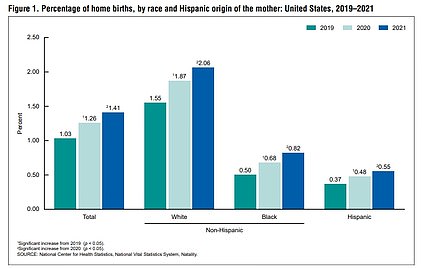 The above graph shows how homebirths in the US have risen since 2019. They have become more common during Covid

Increases were seen across races and ethnicities, although home births were much less common among Hispanic women than others.

Elizabeth Gregory, the report’s lead author, said reasons for the increases are unknown, but they occurred when COVID-19 rates were high and vaccinations were either unavailable or not widely used.

Other reports have shown that many people avoided hospital and doctor visits early in the pandemic.

Other possible reasons: Women lacked health insurance or lived far from a hospital and couldn’t make it there in time. Previous research suggests that about 1 in 4 home births are unplanned.

‘If you have 10 babies in front of you and one of them is having to face the complications that comes with prematurity, that’s unacceptable, and we need to do better.’

She added: ‘The United States is one of the worst places to give birth and be born among industrialized countries, unfortunately.

‘When we look at maternal deaths and infant deaths, we’re at the bottom of the pack among countries with similar profiles in terms of gross domestic product.’

Martha Wingate, director of perinatal care at the University of Alabama, told NBC that her state and others were ‘failing moms and babies’.

‘Regardless of who you are, if you are pregnant and deliver a baby in Alabama you are at higher risk of dying, of your baby dying, period,’ she said.

‘We have places in the state where women live two to three hours from the closest delivery hospitals. Our outcomes shouldn’t look like this. We can do better.’

The preterm birth rate in the United States fell steadily until 2015.

But since then rates started to trend upwards, with only a slight plateau in 2020 — the first year of the Covid pandemic.

Lower access to healthcare particularly among black and native American women was thought to be driving the rise before Covid.

But inequalities were also exacerbated during the pandemic.

America’s surging obesity rate was also blamed for higher rates, as it raises the risk of preterm birth as well as other conditions that can cause this such as high blood pressure and type 2 diabetes.

An estimated four in ten Americans are obese, the CDC says, up from three in ten from the year 2000.

Infants need to reach 40 weeks to go through final development stages, including of the brain, lungs and liver.

Those born too early have higher death rates, or are more likely to suffer from breathing problems, feeding difficulties, developmental delay, vision problems and other conditions like cerebral palsy.

Dr Cynthia Gyamfi-Bannerman, an obstetrician at the University of California, San Diego, told USA Today that rates were heading in the ‘wrong direction’.

‘It shows that we are not doing enough,’ she said. ‘It suggests we are moving in the wrong direction in terms of solutions. Any increase in preterm births is concerning because of the downstream effects on the infant after a preterm delivery.’

The report published this week found black women had the highest rate of preterm births, at 14.4 per cent.

Native American had the second highest (11.8 per cent), followed by Hispanic (10 per cent), White (9.3 per cent) and Pacific Islander (nine per cent).

Only one state — Vermont — was rated ‘A’, with a preterm birth rate below eight per cent. But nine — Alabama, Arkansas, Georgia, Kentucky, Louisiana, Mississippi, Oklahoma, South Carolina and West Virginia — were given an ‘F’ or with a rate higher than 11.5 per cent. 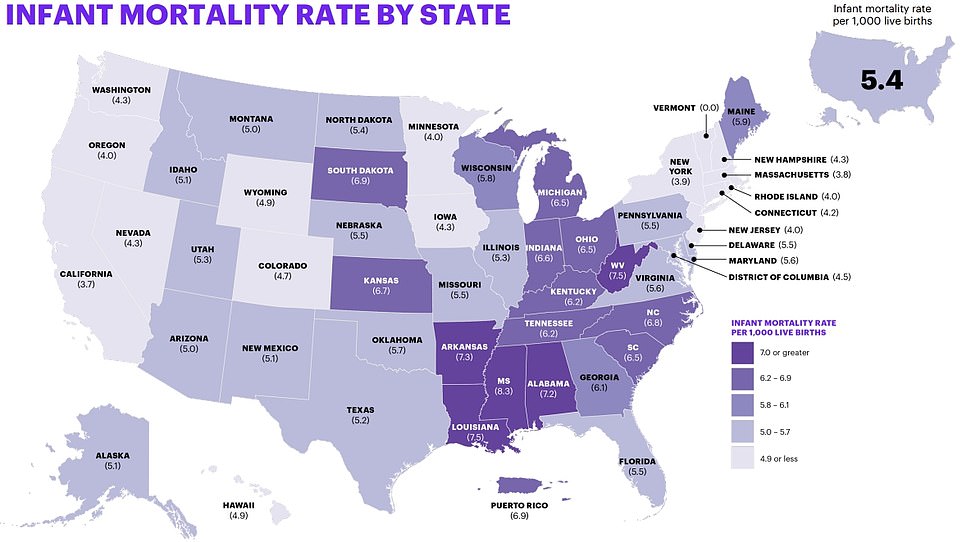 The above graph shows the preterm birth rate in the US over the last decade. It has now reached a record high

The infant mortality rate fell last year to the lowest level on record, but experts said it still lagged behind that of many nations

The report also revealed a rise in low-risk Cesarean sections, which were up from 31.8 to 32.1 per cent last year to nearly a third of all births.

This is a major form of surgery with immediate and long-term risks, which March of Dimes also suggested could be behind the rise.

A spokesman for March of Dimes told DailyMail.com that rates may continue to rise in the future.

‘It’s important to note that the data in our 2022 report card predates the Supreme Court’s decision to overturn abortion as a constitutional right.

‘We are concerned that current and future maternal care providers may be dissuaded from practicing in states that have more restrictive penalties for abortions, thereby creating a workforce shortage for maternal services.

‘We will assess and report on the impact state restrictions will have in under-resourced communities and communities of color, which already face higher risk disparities in maternal and infant health care.’

Breaking the US into cities showed Detroit, Michigan, had the highest preterm rate in the country at 15.1 per cent, alongside Cleveland, Ohio, at 14.7 per cent, and New Orleans, Louisiana, at 14.4 per cent.

These were also the only three cities to earn an ‘A’ or ‘A-‘ for their premature birth rates.

Dr Stacey Steward, president of March of Dimes, said: ‘This year’s report sheds new light on the devastating consequences of the pandemic for moms and babies in our country.

‘While fewer babies are dying, more of them are being born too sick and too soon which can lead to lifelong health problems.

‘Pregnant women with Covid have a 40 per cent higher risk of preterm birth and we know more women are starting their pregnancies with chronic health conditions which canfurther increase their risk of complications.’

She added: ‘It’s clear that we’re at a critical moment in our country and that’s why we’re urging policymakers to act now to advance legislation that will measurably improve the health of moms and babies.’