A huge number of Britons of all ages have no savings at a time when prices are rising by levels not seen in 40 years, new research shows.

Almost half of under 25s have no savings at all, according to research by MoneySupermarket.

Nearly a quarter of over 65s were also found to have zero savings to help them cope with the cost of living crisis, with a further 22 per cent having less than £2,000 in the bank.

Those in the West Midlands are most likely in the UK to have no savings at all according to the research.

Other than age, there was also found to be some stark regional divides. People living in the Midlands were found to be the most likely in the UK to have no savings at all.

While the research did reveal that overall, three quarters of Britons do have an emergency fund saved, more than half are certain they will need to dip into it as inflation spirals.

It perhaps not surprising therefore that the latest figures from the Bank of England show the amount people that are saving has plummeted.

The combined net flow of savings into both deposit and NS&I accounts in June was £1.9billion, down from £5.6billion in May.

The average size of a saving pot across the UK totals £5,677 per household, according to the comparison website, however, this greatly varies between regions.

East Anglia was found to have the highest savings levels with £6,449 saved on average per person, whilst the North East typically only has £2,661 saved per person.

More than half of Britons are certain they will need to dip into their savings this year, with an average of £1,672 per person expected to be used towards unexpected costs is £1,672 equating to nearly 30 per cent of what the average person has in savings.

Personal finance experts all stress the importance of having a rainy day fund – easily accessible money which acts as a financial cushion to deal with unforeseen events.

Some say a rainy day pot should cover between three to six months worth of basic living expenses.

Others suggest you keep the equivalent of at least three months of your take home salary.

Based on this research, even more Britons seem to be coming up short. 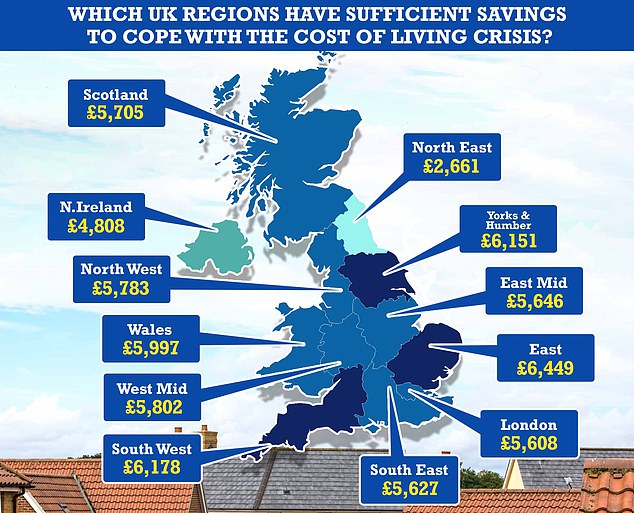 Regional disparity: East Anglia has the highest average saved, (£6,449), while the North East has the least (£2,661), according to the research.

Of those who reported having savings, a third have less than £2,000 saved, according to MoneySupermarket.

In the North East the picture is even more dire, with almost two thirds of savers unable to draw on £2,000 in an emergency.

Jo Thornhill, personal finance expert at MoneySuperMarket, said: ‘As we face the cost of living crisis, any unexpected financial costs or emergencies could have a devastating impact on many households’ finances.

‘A car or boiler breaking down could wipe out what savings many Brits have and leave people unsure where to turn for help.’

As the situation worsens, more people are expected to try and either dramatically cut back on spending or borrow their way out of trouble.

Half of Britons have already cut back on spending in order to cope, according to figures revealed in TransUnion’s latest study.

It found that half of Britons have reduced expenditure over the past three months.

Over the next three months, people are planning to reduce their spending on things such as dining out, travel and entertainment, as well as on shopping for clothing and electronics, the survey showed.

For the quarter of Britons with no savings, borrowing is all the more likely. According to MoneySupermarket, two in five will use their credit card, while others will resort to personal loans or loans from family members.

This already appears to be somewhat in motion.

Britons borrowed an additional £1.8billion in credit in June, according to the latest Bank of England figures, doubling the £900million of borrowing in May.

This sits well above above the 12-month pre-pandemic average up to February 2020 of £1billion of borrowing a month.

Rosie Hooper, chartered financial planner at Quilter said: ‘The increase in borrowing is really cause for concern as while it is still warm the worst of the energy crisis is not in full force.

‘As the nights draw in and temperatures plunge things could get significantly worse.

‘Credit cards have some of the highest interest rates and if the borrowing is to pay for the current higher cost of living or paying for essential bills, then people could very quickly spiral into unmanageable debt.’ Desperate times call for desperate measures: Around a quarter of under-35s would turn to a payday loan in an emergency.

The research by the comparison website also found that 12 per cent of Britons said they would choose to take out a payday loan to keep them going.

It found that around a quarter of under 35s would turn to a payday loan in an emergency.

A payday loan is a type of short-term borrowing where a lender charges high-interest based on your income. It’s typically a small amount of money lent on the agreement that it will be repaid when the borrower receives their next paycheck.

‘There is a concerted effort being made by UK consumers to cut back spending,’ said Kelli Fielding, managing director of consumer interactive ay TransUnion.

‘With continuing financial pressure amid the rising cost of living, it’s more important than ever that people remain diligent about their credit and put into practice healthy habits such as making payments on time, checking their credit information and keeping an eye on their credit score.

‘This will help them stay in control of their financial wellbeing and help to ensure they can access finance if needed.’

How can Britons keep their heads above water?

Another way to build up the fund is by setting up a direct debit to go from their current account into an easy-access account on payday each month.

Those who are struggling to free up cash to save need to set some time aside to review their spending for anything they could cut back on, or if they could cancel subscriptions they no longer use.

Shopping around for better deals on essentials such as insurance, broadband and their mobile phone is also a great way to cut costs.

Meanwhile, another option to consider is a clear out of items around the home that are no longer used – selling them on websites such as Facebook Marketplace. These sales can then be diverted into a savings pot. 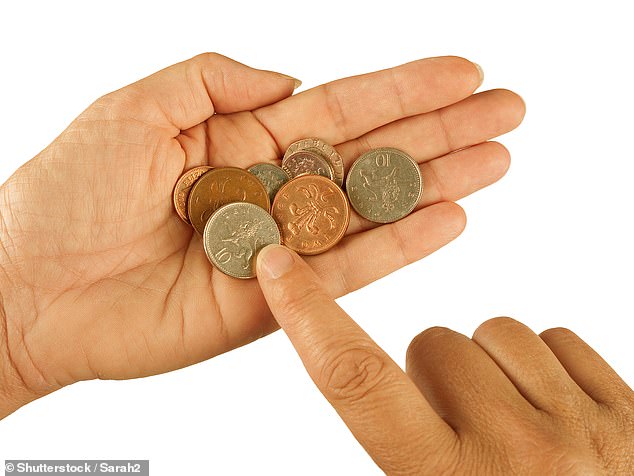 While the research reveals that 75 per cent of Britons do have savings, more than half are certain they will need to dip into it as inflation spirals and the cost of living rises.

For those looking to kickstart a savings habit there are a host of money management apps and websites specifically designed to simplify the process and for novices, the importance of getting started.

They won’t necessarily help savers secure the best deal on the market – although some will – but they can at least get people into the habit of saving.

Some savings apps can help you automatically save by rounding up your spare change when you spend on your bank card.

Some apps calculate how much you can afford to put aside and squirrel it away automatically, while others allow you to set yourself quirky savings challenges.

They can also help to simplify the savings process and remove the form filling and time sacrifice you might otherwise experience were you to move from provider to provider on the open market.

Three apps to get you saving

Chip is an automatic savings and investment app designed with the intention of helping its customers to save without having to even think about it.

Chip uses artificial intelligence technology linked to your bank account via open banking to calculate how much its customers can afford to save based on their spending habits.

It then transfers that money from their current account to their Chip account – automatically whilst not interfering with a person’s normal day-to-day spending habits.

Customers can increase or decrease the amount Chip puts aside by tweaking their saving level on the app, which determines how fast or slow they want to save.

Chip can apparently adapt to a person overspending or earning irregular income and can adjust the savings amounts accordingly.

It offers a host of features – it analyses your spending habits, helps set savings goals, and can automatically set a regular amount to save every time you get paid by your employer.

Moneybox is an app that allows savers to round up their everyday bank card purchases to the nearest pound and set aside the spare change into a savings account.

Similar to Chip it uses open banking to link to your bank account and means savers can get into the habit of saving every time they spend without having to actively set aside money.

Savers can also deposit money into their account on a weekly or monthly basis and even give themselves a monthly boost when payday arrives.

The round-ups feature will likely be particularly attractive to those who are struggling to get into a savings habit.

How much you save will depend how many transactions you make, but according to Moneybox, its customers are making around 30 transactions per week with an average round up of about 28p each time, resulting in £8.41 savings per week from round ups alone.

Similar to Chip and Moneybox, Plum connects to your current account and analyses your incomings and outgoings.

It analyses transactions and then identifies your regular income, rent, bills and daily spend.

Using this and other factors like your available balance it calculates daily what amount it can safely put aside without impacting your daily life and moves it to your Plum account via direct debit every four to five days.

It also offers a round-up feature much like Moneybox so you can save spare change without any effort.

You can create your own savings buckets based on your personal goals whether that be a holiday or a house, for example.

Plum is then able to adapt to help you automatically save to meet those goals.

It also allows you to choose your own auto-saving rules or you can pick a mood to save based on how you’re feeling.