One in 500 Americans has died from COVID-19 since the pandemic began even as the fourth wave continues to show signs of ebbing.

As of Wednesday morning, 663,963 U.S. residents have died from the coronavirus, according to figures complied by Johns Hopkins University – and the country’s population sits at 331,449,281, the most recent data from the U.S. Census Bureau shows.

When the death toll is divided by the population total, it shows that 0.2 percent of Americans have died from virus-related causes.

The grim milestone comes as the overall number of average COVID-19 infections continues to rise but the growth rate significantly slows.

On Tuesday, officials recorded 143,895 new cases of Covid with a seven-day rolling average of 154,449, according to Johns Hopkins.

Nearly half of U.S. states have seen Covid infections either decline or hold steady over the last week, a DailyMail.com analysis of the data shows.

Deaths have risen with 1,823 virus-related fatalities recorded on Tuesday with a seven-day rolling average of 1,873, which is a 163 jump from the average of 644 reported four weeks ago.

However, experts say that fatalities are a lagging indicator and often don’t start to decline until two or three weeks after cases do.

While one-time hot spots such as Florida and Louisiana are improving, infection rates are still soaring in a few states, such as Ohio and West Virginia, fueled by low vaccination levels.

One in 500 Americans has died from COVID-19 since the pandemic began and 1,823 virus-related fatalities were recorded on Tuesday with a seven-day rolling average of 1,873 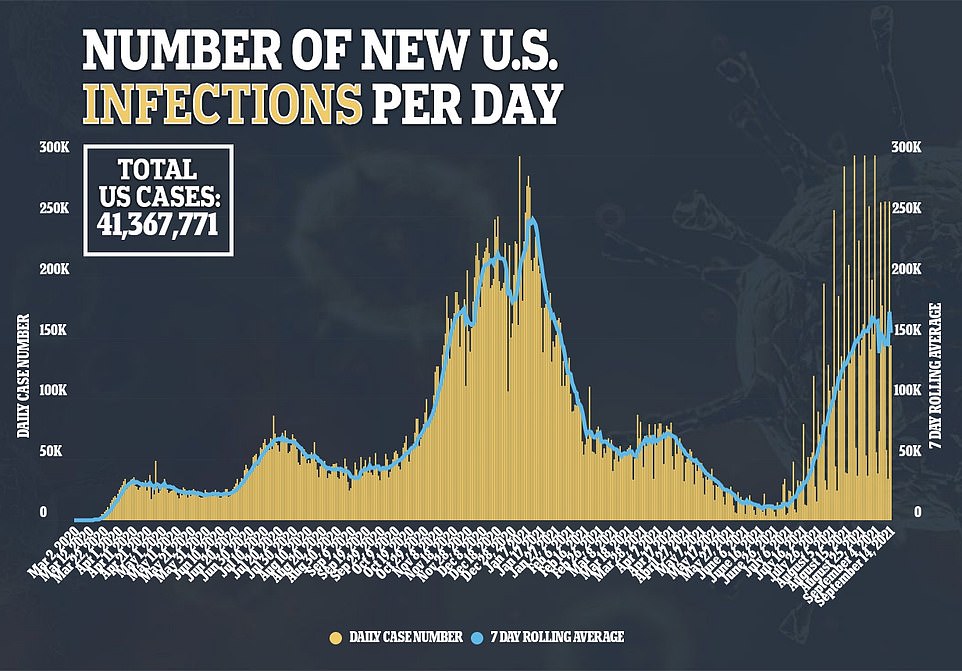 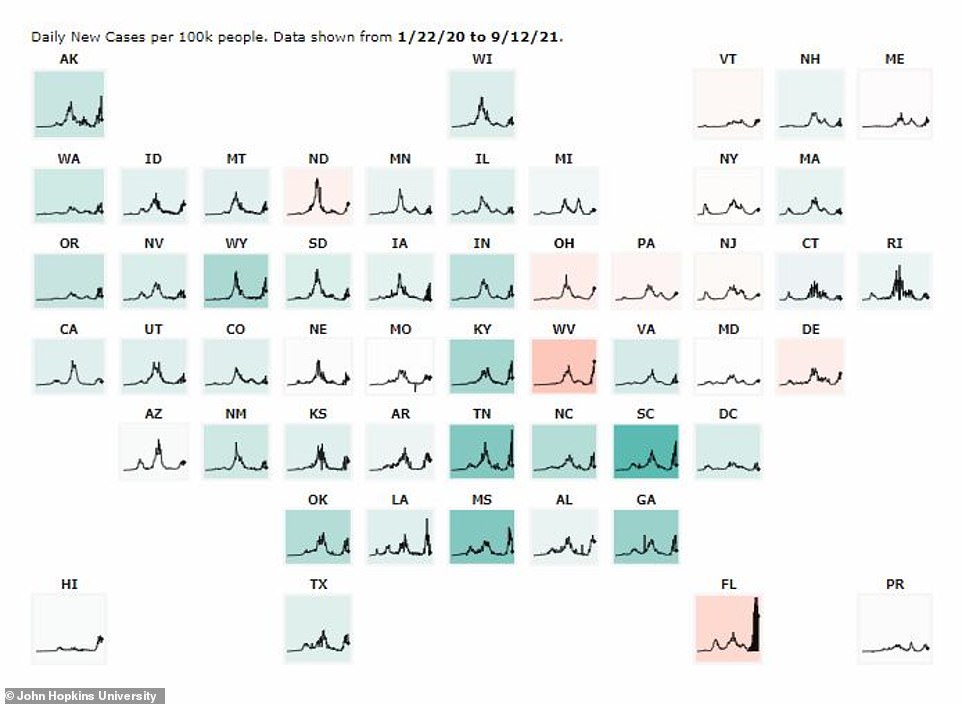 Nearly half of U.S. states have seen Covid infections either decline or hold steady over the last week

The country is well below the terrifying peaks reached in January 202, when it was averaging about 3,400 deaths and a quarter-million cases per day.

On Friday, a Food and Drug Administration (FDA) advisory panel will meet to discuss whether the U.S. should begin giving booster shots of the Pfizer vaccine.

On another positive note, the number of people now in the hospital with COVID-19 appears to be leveling off or even declining at around 90,000, or about where things stood in February.

And the roughly 17 million workers at health facilities that receive federal Medicare or Medicaid also will have to be fully vaccinated.

‘We read about and hear about and we see the stories of hospitalized people, people on their deathbeds among the unvaccinated over the past few weeks,’ Biden said in announcing the rules last week.

‘This is a pandemic of the unvaccinated.’

The requirements have met with resistance and threats of lawsuits from Republicans, who say people should be able to choose whether or not they want to received the shots.

However, there are still U.S. hotspots, with some states seeing an increase in cases due to low vaccination rates.

The number of positive cases and people hospitalized for the coronavirus in West Virginia both smashed records as Gov Jim Justice scolded residents who continue to balk at receiving COVID-19 vaccines.

Last week, the number of confirmed virus cases statewide totaled about 8,860, breaking the weekly record of about 8,200 from early January. 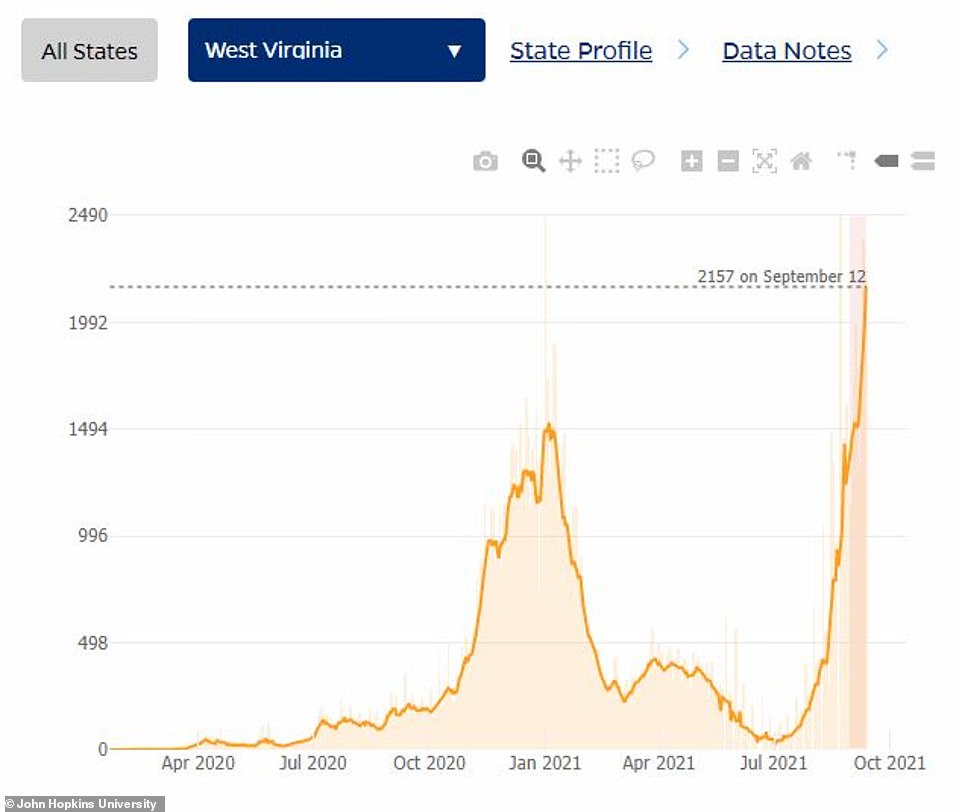 In West Virginia, the number of positive cases and people hospitalized broke record levels with just 40% of all residents fully vaccinated 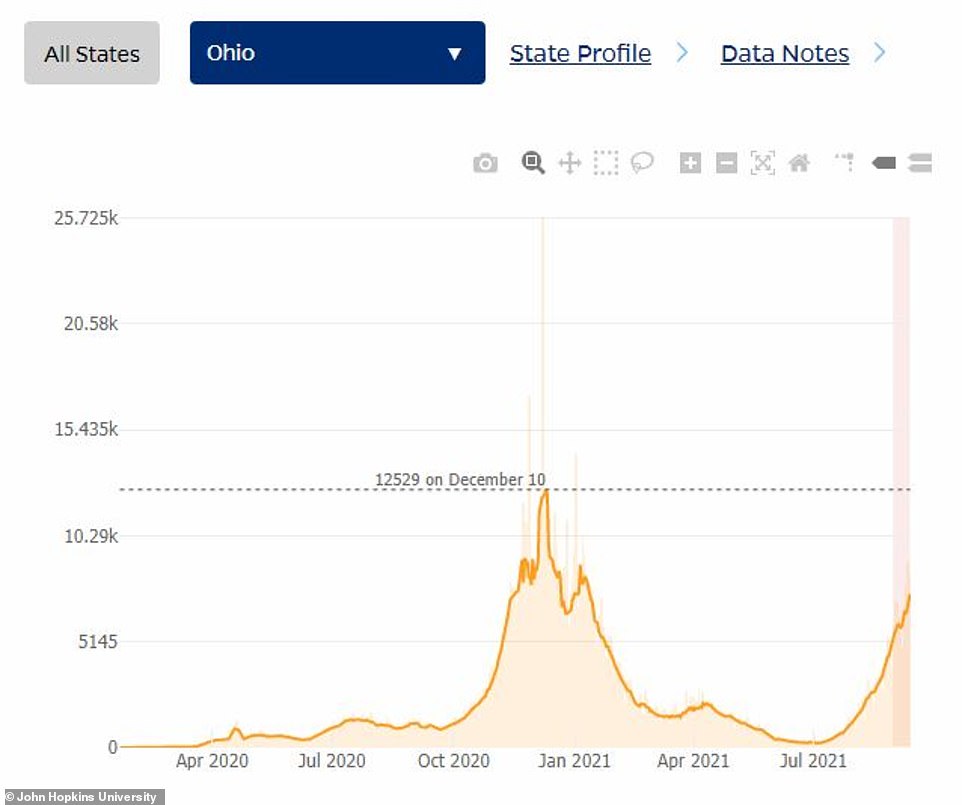 Covid cases have also been rising in Ohio with 7,325 recorded on Tuesday, and fewer than half of people in 66 of Ohio’s 88 counties vaccinated

Additionally, there were a record 852 people hospitalized for the virus on Monday.

That blew past the mark of 818 set on January 5 and was a jump from 810 on Saturday. Such cases had bottomed out at 52 in early July before rising sharply over the past two months.

West Virginia currently has the lowest vaccination rate in the nation with just 40 percent of residents fully vaccinated, according to Centers for Disease Control and Prevention (CDC) data.

‘This is a pandemic of the unvaccinated,’ Justice said at a news conference.

At the conference, Justice introduced Linda Lanier, who said her adult son, Joe Goodnite, refused to get vaccinated and contracted COVID-19 on a family vacation.

He’s been in a Charleston hospital for more than six weeks and remains on a ventilator.

Goodnite ‘listened to all the negative and false accusations about vaccination,’ she said.

But while he was still able to talk in the hospital, ‘he told people. ‘Get vaccinated. You don’t want this stuff,’ Lanier added. 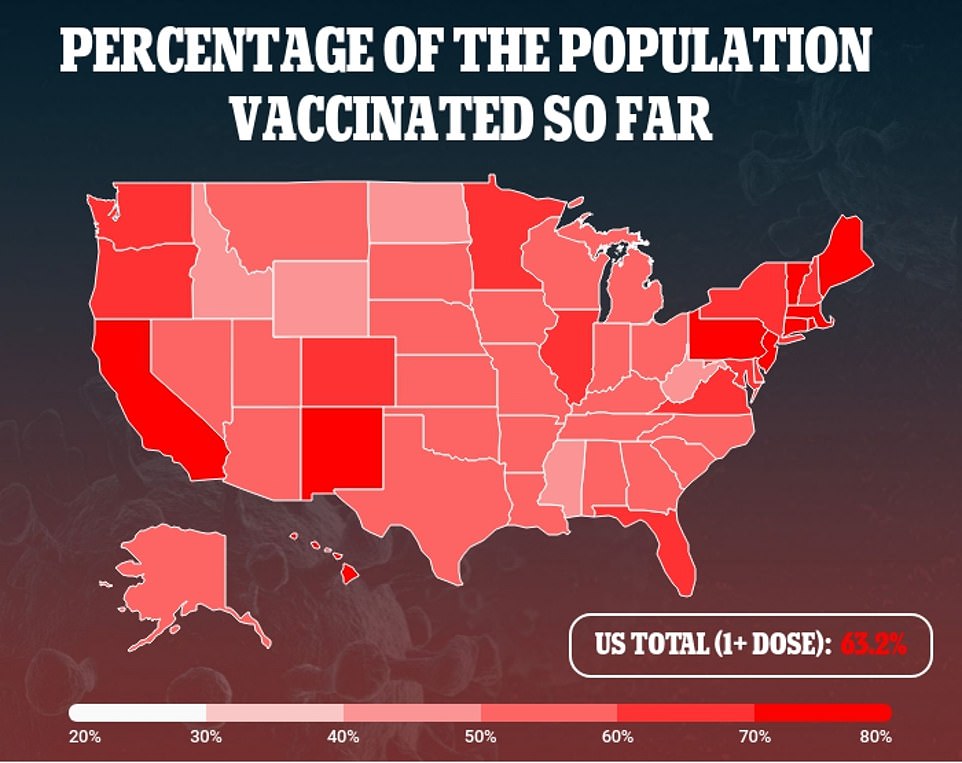 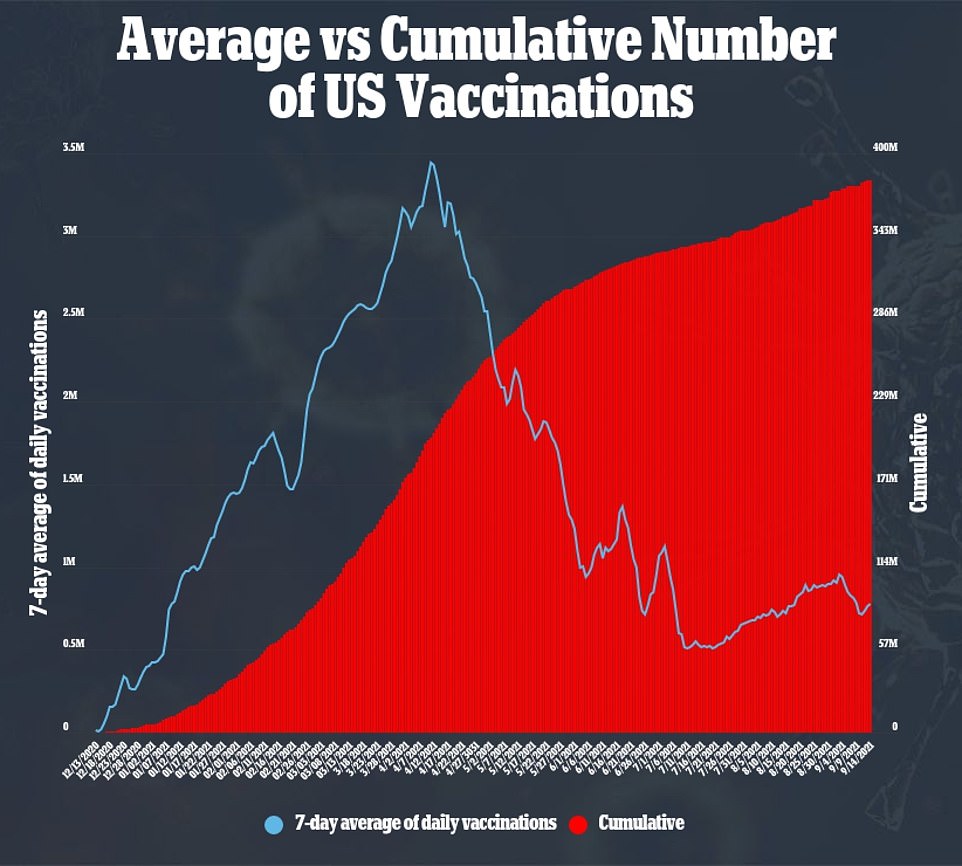 Covid cases have also been rising in Ohio with 7,325 recorded on Tuesday, with an average of 7,071 infections reported in the last week.

Additionally, there are more than 3,200 people hospitalized with COVID-19, an increase from the 2,600 reported last week.

An analysis from the Ohio Capital Journal found that fewer than half of residents in most Ohio counties are vaccinated against COVID-19.

In 66 of the state’s 88 counties, the vaccination rate was found to be fewer than one out of every two people.

Health experts say they are frustrated that large numbers of Ohioans have declined to get vaccinated despite evidence that the shots are safe and effective.

‘I’m not really sure we’re going to change some people’s minds about vaccines,’ Pamela Riggs, commissioner of the Sidney-Shelby County Health Department, told the Capital Journal.

Sidney-Shelby County is the third-least vaccinated county in the stat, according to the newspaper

‘I don’t know what else to say. It has just been a very frustrating experience,’ Riggs added. 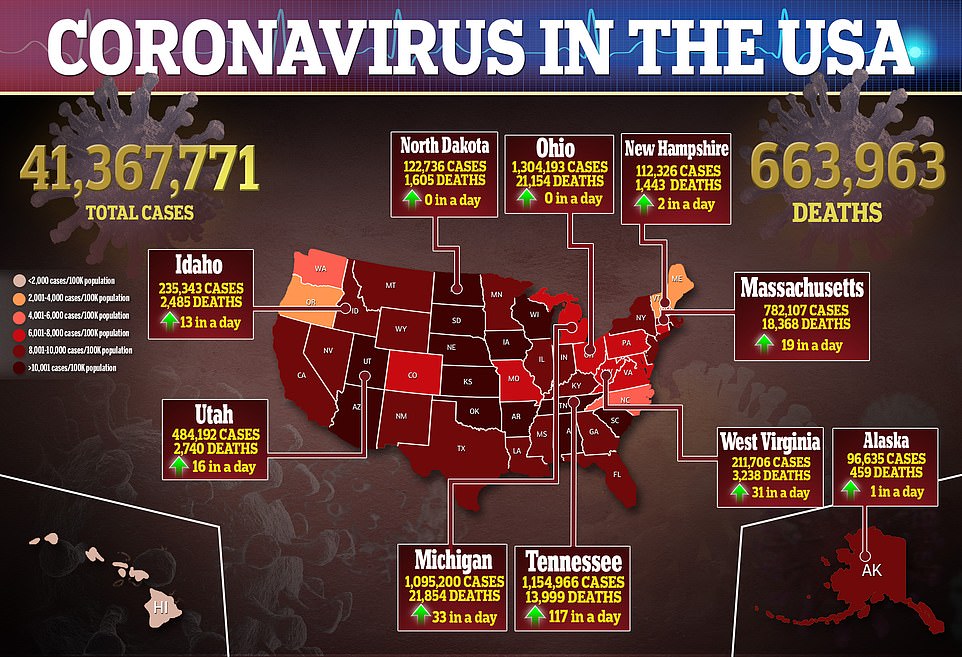