One in 11 Britons have taken a work videocall in their pyjamas during coronavirus lockdown and more than half have worn the same clothes for two days in a row, survey says

One in 11 Britons have admitted wearing pyjamas while taking work related video call while on lockdown.

As the nation completes its first month under the Covid-19 restrictions, people have been adjusting to the dramatic lifestyle changes associated with not having to go into the office.

In a survey by YouGov, 2,260 Britons were asked about the impact Covid-19 was having on their lives. 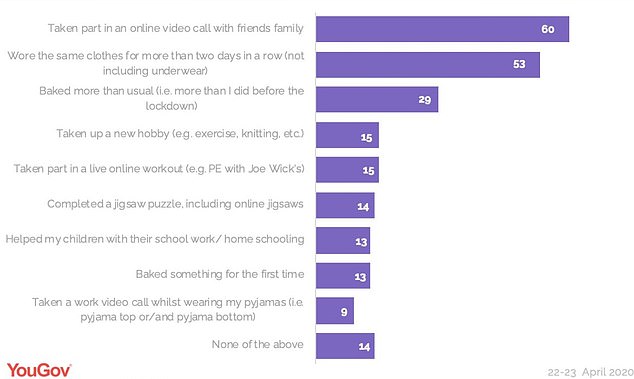 YouGov polled more than 2,200 Britons to ask them about their lockdown experience

As well as wearing night attire while conferencing with co-workers, 53 per cent have admitted wearing the same clothes – even underwear for more than two days in a row.

Almost a third of Britons said they are baking more than normal, while 15 per cent have taken part in a live online work out hosted by the likes of Joe Wicks.

The survey found that ABC1s were more likely to wear the same clothes on successive days at 55 per cent compared to C2DEs at 50 per cent.

People aged between 18 and 24 are around four times more likely to have taken up a new hobby during the lockdown compared to those over 55.

Surprisingly, 13 per cent of Britons admitted to baking something for the first time despite the popularity of cookery programmes on television.

Shockingly, only 13 per cent of Britons with children have admitted helping their offspring with their school work.