At least five people aboard the first cruise ship to set sail in the Caribbean since the start of the pandemic have tested positive for coronavirus, just one day after the liner’s first case was reported.

Passengers on the Sea Dream 1 were informed of the first case aboard – five days into the week-long voyage – with Captain Torbjorn Lund announcing four new cases a day later.

Many aboard are travel writers and bloggers who have been documenting developments and sharing pictures of the ship on their Twitter accounts.

Gene Sloan, a travel writer with The Points Guy who is on the ship, said Lund later announced that there was ‘preliminary evidence’ of a sixth case but a second test was required to confirm.

The ship’s 53 passengers – 37 Americans and 16 other from the UK, Austria, Denmark, Norway, Sweden and Germany –  as well as non-essential crew are quarantining in their cabins after the cruise was halted and the ship returned to dock in Barbados.

Those aboard are being tested for the virus by both the ship’s doctor and authorities in Barbados, though it is not clear how long the quarantine will last.

Five people aboard the SeaDream 1 have tested positive for COVID-19, just one day after the liner’s first case was announced 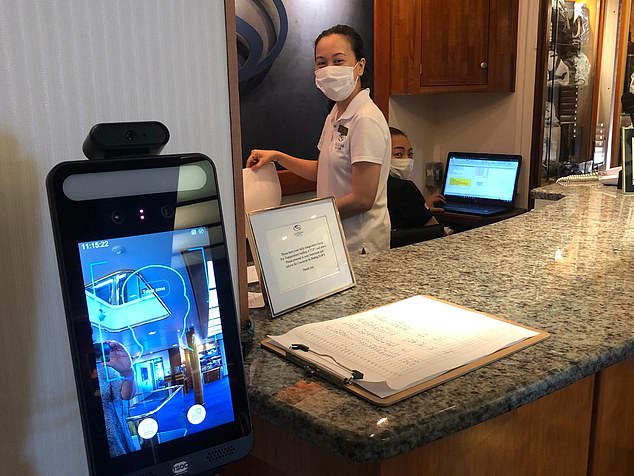 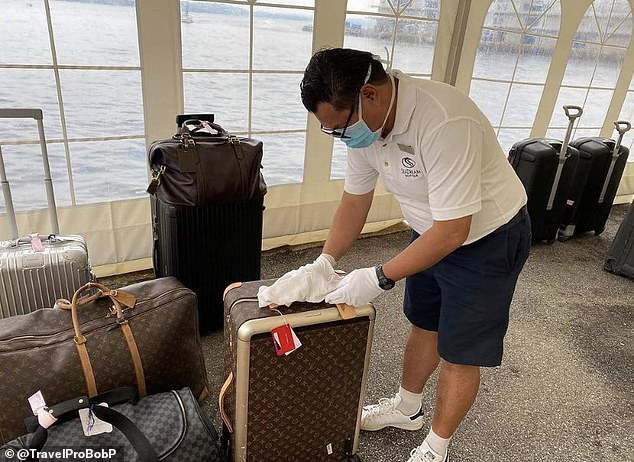 The SeaDream Yacht Club has confirmed that ‘guests’ have tested positive for COVID-19 but did not specify exactly how many of the 53 passengers have received positive tests.

As more cases were reported, a pair of YouTubers among the passengers admitted to ‘feeling slightly anxious’ as they were unsure what would happen next.

Yesterday, ‘Cruise with Ben & David’ shared a photo of meal service instructions given to passengers during their quarantine.

The instructions stated that menus would be slid under passengers’ doors and they should mark their choice of meal with an X before pushing the menu back under the door to be collected.

Travel YouTubers Ben and David were among those aboard the ship. In a Twitter post, the two confessed to ‘feeling slightly anxious’ as the number of cases rose 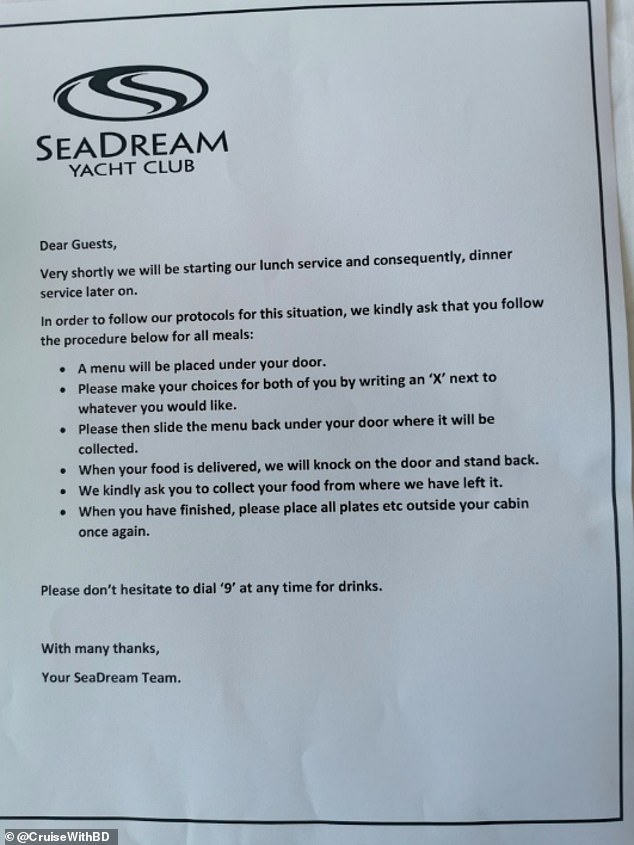 Pictured: Instructions for receiving meals on board the ship during quarantine. The image was shared by travel YouTubers Ben and David on their Twitter account @CruiseWithBD 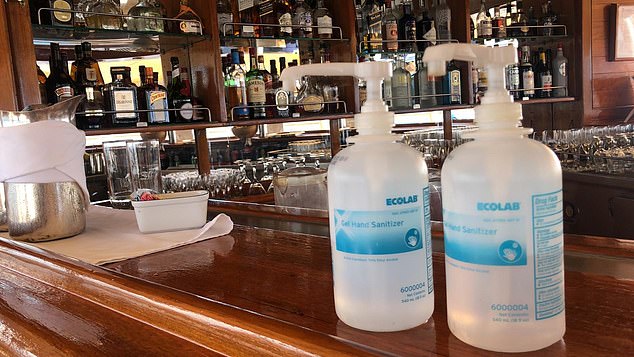 Food would then be delivered outside of the room by crew who would knock the door and stand back, according to the instructions. Passengers are then required to put their plates and other items back outside their door when finished.

The infections come as a blow to the cruise industry which has been decimated by the pandemic after travel dropped off in March amid fears of catching and spreading the virus.

Cruise ships in particular gained a reputation as potential floating petri dishes after a number of huge outbreaks aboard liners in the early stages of the pandemic in February.

The Sea Dream 1’s voyage was intended to restore confidence in the industry and coax travellers back onto liners with increased safety protocols.

Many of the passengers are journalists and travel bloggers invited to document the journey.

All 53 passengers, as well as non-essential crew, are now quarantined in their cabins on the ship, which is docked in Barbados 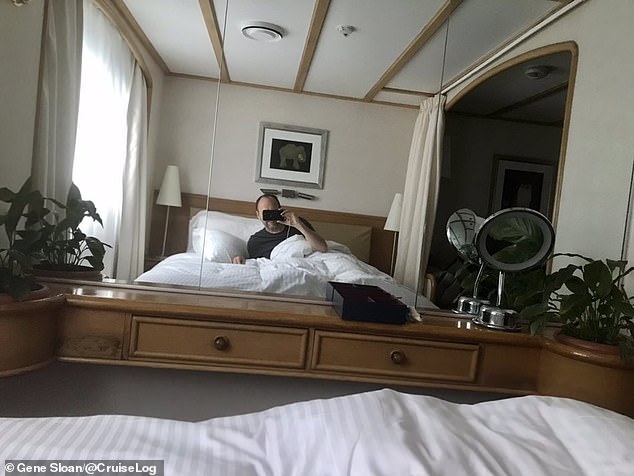 Travel writer Gene Sloan (@CruiseLog) shared an image of his cabin on board the Sea Dream 1, where he is now in quarantine. All 53 passengers are quarantining in their cabins 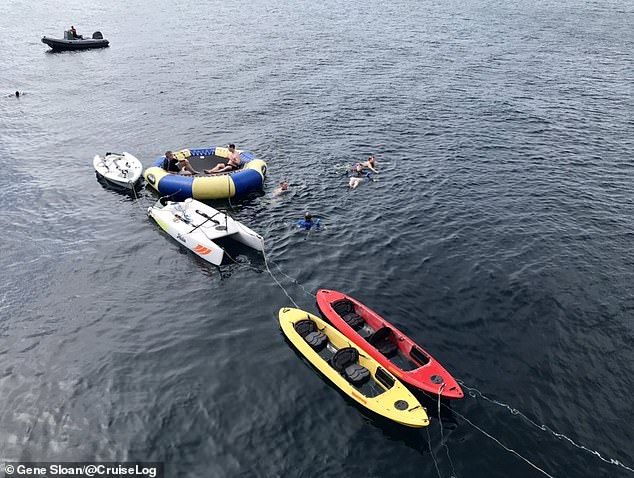 Prior to any cases being discovered, passengers were able to

The cruise was the first of 22 sailings in the Caribbean planned through the spring that hoped to revitalise the industry by attempting to create COVID-free bubble onboard.

The ship was scheduled to make stops at islands in St Vincent and the Grenadines, and Grenada.

After the first positive test, Sloan wrote that the ship began working under the assumption that it had more infected passengers onboard and would immediately return to its point of departure in Bridgetown, Barbados.

Meanwhile, the remaining passengers and 66 crew members were all tested by the ship’s doctor.

Sloan reported that when the captain announced the sixth potential case, he added that an initial round of tests for all others aboard had come back negative.

None of the passengers visited any island towns during stops nor did they come in contact with locals, Sloane said.

Travel writer Gene Sloan is among the 53 passengers onboard the Norwegian cruise ship that set sail from Barbados on Saturday and has been documenting his trip. Pictured: Crew members wearing masks on board 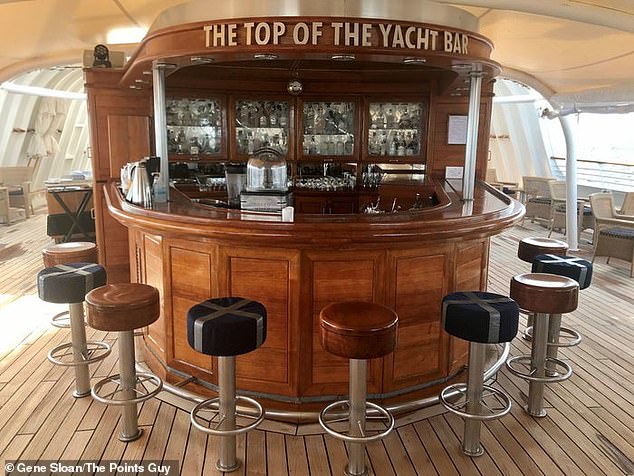 Passengers had to undergo a ‘gauntlet’ of COVID-19 testing for the trip and were required to test negative three times before and during the journey. The ship also kept social distancing guidelines in place at its pools, bars (pictured) and deck-top lounge area

Prior to starting the trip, all travellers were required to undergo a ‘gauntlet’ of COVID-19 testing including three separate tests.

They were had to produce negative results in a test taken days before boarding, on the day of departure, and three days after setting sail.

The strict testing system intended to create a ‘COVID-free bubble’ on the ship to ensure the odds of an outbreak were extremely low.

Because of this, passengers were initially not required to wear masks on board.

However, those rules were later overturned by the ship’s activity director on Monday evening, Sloan said.

The ship had also kept social distancing guidelines in place at its pools, bars and deck-top lounge area.

Aside from the restrictions, Sloan in an earlier blog post had described the experience as ‘surprisingly normal.’

Of the 53 passengers, 37 are American and the remaining 16 from the UK, Austria, Denmark, Norway, Sweden and Germany.

Sloan said the captain said on Thursday that the ship is working with local authorities in Barbados to form a plan that would allow passengers who test negative for coronavirus to leave the ship in the next few days.

They would have to first receive negative test results from both the ship’s doctor and the authorities in Barbados, he said. 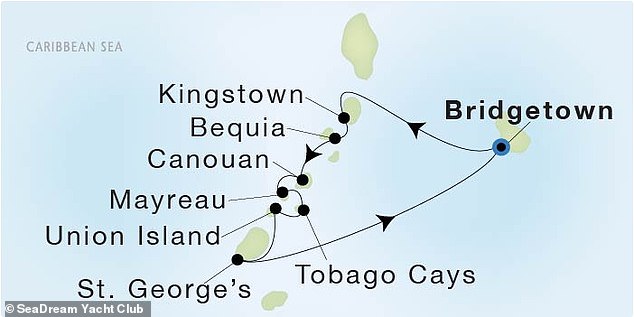 The SeaDream 1 cruise was the first of 22 sailings that the cruise line planned in the region through the spring and was expected to make stops at islands in Saint Vincent and the Grenadines, and Grenada

The outbreak comes as the cruise industry began taking tentative steps to rebuild its image after several coronavirus outbreaks were reported across multiple liners earlier this year, some of which were required to keep their passengers quarantined aboard for weeks.

Perhaps the most famous case is that of the Diamond Princess cruise ship, which was quarantined in Japan from February 5 to February 19.

One sick passenger eventually led to nearly 700 infections and seven deaths from COVID-19.

The rapid spread of the virus prompted the US Centers for Disease Control and Prevention (CDC) to impose a no-sail order on US cruises in mid March for 30 days.

The ban was lifted late last month, with the agency issuing new guidance to help companies resume operations over the next several months.

However, living the ban did not mean the CDC was allowing cruises in the US to resume as the country faces a battles another wave of infections.

It would instead serve as framework that will allow the cruise industry to restart operations in phases along with an implementation of safety measures.