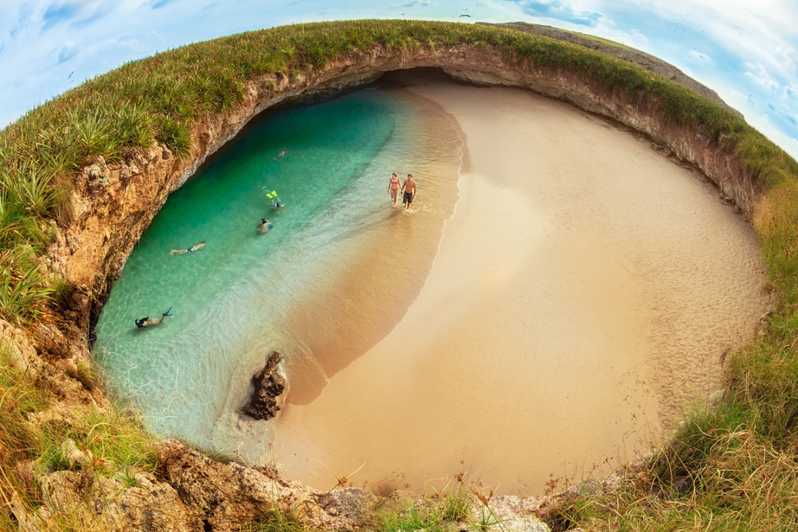 When the Mexican military used the Marieta Islands for target practice in the early 1900s, little did they know their efforts would lead to the creation of a future tourist destination.

But, in fact, repeated bombings on the islands are thought to have created what is now known as Hidden Beach. Yet, it’s not quite so hidden these days.

The Marieta Islands are located just a few miles off the tip of Punta Mita on the west coast of Mexico. This archipelago in Banderas Bay (Bahía de Banderas) is thought to have been formed by volcanic activity thousands of years ago. The islands have never been inhabited by humans, only by wildlife.

An aerial view of the islands reveals a large circular crater, and within the crater is the secluded beach Playa Escondida (“Hidden Beach”). It’s also called Playa del Amor or Lovers’ Beach.

The beautiful, hard-to-access spot is highly sought out by tourists from around the world. No doubt its somewhat “secretive” location adds to its allure, but its pristine, sugary white sand and bright blue water help, too. 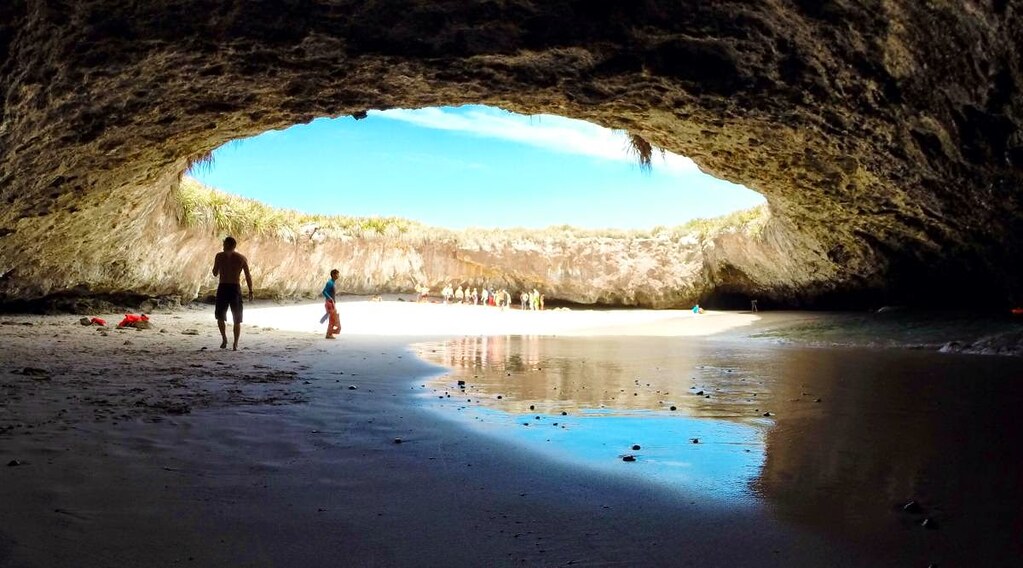 The challenge of actually getting there – the short stretch of beach is only accessible by swimming through an underwater tunnel – plays a role in its intrigue too.

Overcoming the beach’s elusiveness is an accomplishment in and of itself.

Unfortunately, an increase in visitors eventually led to pollution and trash build-up, which, in turn, placed the coral reef and endangered species living on the Marieta Islands in jeopardy.

Instagram is not all to blame, however. Efforts to protect the islands and the mystical Hidden Beach actually began long before the internet went gaga over the photos.

During the late 1960s in an effort to preserve the environment and prevent harm to the area, scientist and marine conservationist Jacques Cousteau stepped in. Bringing much-needed attention to the islands when he began advocating for their protection, his efforts ultimately paid off.

Some 40 years later, in 2005, the islands were finally designated a national park – Parque Nacional Islas Marietas. Offering further protection from destruction, in 2008 they were also designated as a UNESCO MAB (Man and Biosphere) Reserve. MAB sites are those which aim to strengthen the relationship between people and the environment with the help of science. 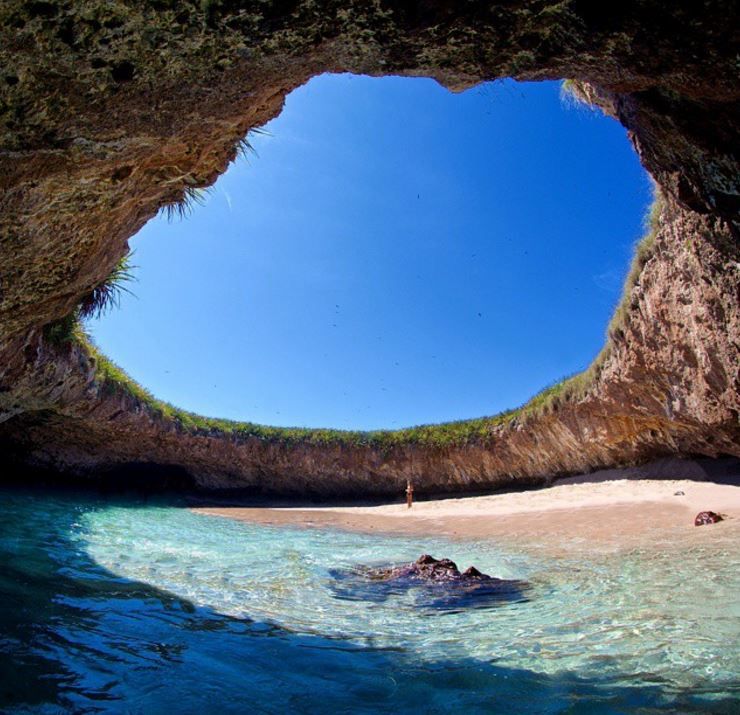 These protective measures were, however, deemed not enough. By May 2016, there were almost 2,500 tourists visiting daily. Both natural phenomena and bad tourism practices continued to negatively impact the coral colonies in the area.

Officials declared the temporary closure of Hidden Beach as they worked to evaluate the best way to keep the popular tourist attraction open for the long-term.

In August 31, 2016, the beach reopened, albeit with stricter visitation limits in place. Authorities allow visitors to swim, but they’re not allowed to wear fins, and scuba diving is prohibited. Additionally, only reef-friendly sunscreens are permitted.

Down from the thousands of people visiting each day, now only 117 people are allowed per day, and the beach is closed to visitors on Mondays and Tuesdays.

These limitations may have decreased visitation, but demand to check off this bucket-list item has, unsurprisingly, only increased.

After all, it’s one thing to ooh and ahh over pictures on Instagram (users can search the hashtag hidden beach and be transported to turquoise waters and pristine sand), it’s another to experience it in the flesh.

In order to respect the maximum number of allowed visitors, only five operators (including Punta Mita Charters, Nayarit Adventures and Ally Cat Sailing Adventures) have permission to take groups to the Marietas Islands. Tours incorporate only a 20-minute visit to Hidden Beach.

Interested travelers would do well to book a tour at least a month or two in advance.

Here’s the kicker, though: Just getting a spot on the tour doesn’t guarantee a stop at Hidden Beach. Sea conditions could potentially omit the special stop.

“The Marieta Islands are one of Mexico’s most treasured jewels in Riviera Nayarit, and one of the icons that people immediately tie back to this UNESCO-listed biosphere reserve”.

From Puerto Vallarta, Nuevo Vallarta, Punta de Mita and Sayulita, the voyage takes approximately one hour. As you motor out towards the islands, you may spot dolphins or whales in the water. About 75 meters (200 feet) from the entrance to Hidden Beach, the tour boat will drop anchor. After the boat is moored, you will be fitted for a life preserver and helmet.

Even skilled swimmers will need to wear a life preserver as the only way to actually reach Hidden Beach is by swimming to it through a tunnel.

Tour staff will be in kayaks nearby monitoring you as you approach the cave, but this is still not a swim for water-wary individuals. You must swim in during low tide when there is the maximum amount of clearance between the water and the top of the rocky entrance.

And even then, the passageway only has approximately six feet of vertical clearance. But, get ready for a major adrenaline rush as the tide pushes you in through the opening. You might even feel like your head grazes the top of the cave. When you finally burst through the opening and into the crater, you will come right up on the shores of Hidden Beach.

With a sea of crystal clear blue ocean water surrounding you, if you look up, you’ll see a large dome opening straight up into the bright blue Mexican sky.