Dozens of revellers have been plunged into isolation, amid fears a dance party cruise could become an Omicron super spreader event, with Melbourne likely to record its first case of the variant.

Five attendees who attended the Friday night cruise on Sydney Harbour so far have tested positive to Covid-19 with at least two ‘likely’ to have the new Omicron variant, based on preliminary testing.

Victorian health authorities are racing to confirm if the state has recorded its first Omicron case after a traveller who arrived on an Etihad flight from the Netherlands from Abu Dhabi tested positive to Covid.

Preliminary results are consistent with Omicron. The passenger is in hotel quarantine and hasn’t been infectious in the community.

Individuals who were on board and members of their households are urged to immediately get tested and isolate.

Revellers danced the night away on three levels of the cruise with a different musical stage on each level, along with confetti and CO2 canons.

‘We’re going back to the 90s for this Flow Fridays Boat Party,’ an event description read.

‘Think 90s hits, double denim, the old RnB bangers that you found on a So Fresh CD in your brothers bedroom and combine that with our rooftop stage setup, 360 people partying, Co2 Cannons to bring you the ultimate 90s boat party!’ 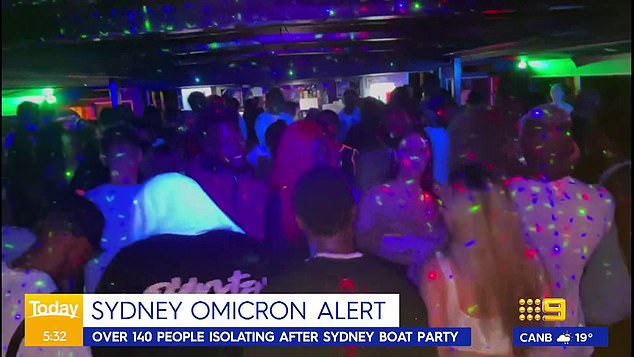