A US Olympic medal-winning fencer accused a New Jersey teacher of pulling off a second-grader’s hijab in the middle of class despite the student’s resistance.

‘Herman told the student that her hair was beautiful and she did not have to wear hijab to school anymore,’ Muhammad wrote on Instagram on Wednesday.

‘Imagine being a child and stripped of your clothing in front of your classmates. Imagine the humiliation and trauma this experience has caused her.’ 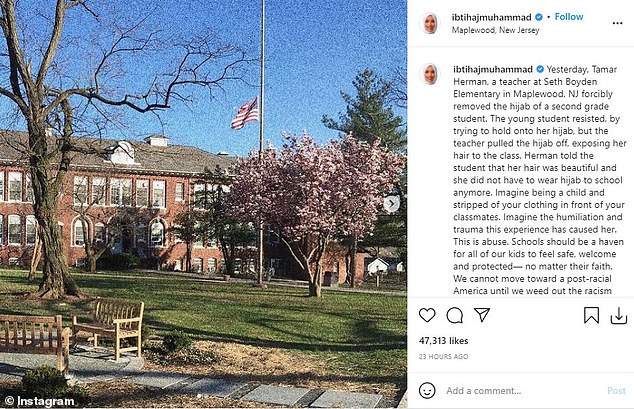 Muhammad shared the story on her Instagram, calling the incident ‘abuse’ 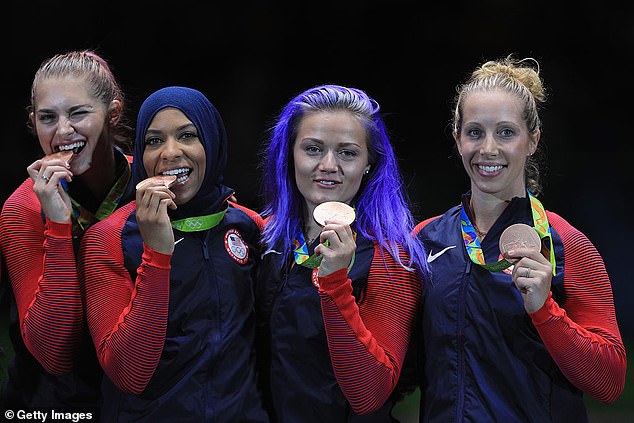 The Olympian, who became the first American Muslim woman to wear a hijab while competing at the Olympic games, won bronze in women’s team sabre in Rio 2016

Herman has been placed on leave and is currently under investigation for the alleged action, said her attorney, Ronald Ricci, who claimed the teacher did nothing wrong.

‘The versions depicted on social media are 100-percent untrue,’ Ricci told NBC News on Friday. ‘We’re confident that after a full, fair investigation that it’ll be found that Ms. Herman committed no wrong doing.’

Herman’s ex-husband, Leonard Herman, also vouched for the teacher’s character and noted that she knows Muhammad.

‘My wife is a friend of hers, they work out in the gym together,’ he said. ‘I don’t know why she’s doing this.

I know she would never do something like that.’

Muhammad did not immediately respond to DailyMail.com’s request for comment on her relationship with the child or Herman.

Muhammad is widely known for being the first American Muslim woman to wear a hijab while competing at the Olympic games and his a New Times bestselling author who wrote about her experiences growing up as a Muslim-American. Along with her fencing, Muhammad found fame as a writer, celebrated for her books that recount the experience of Muslim-Americans 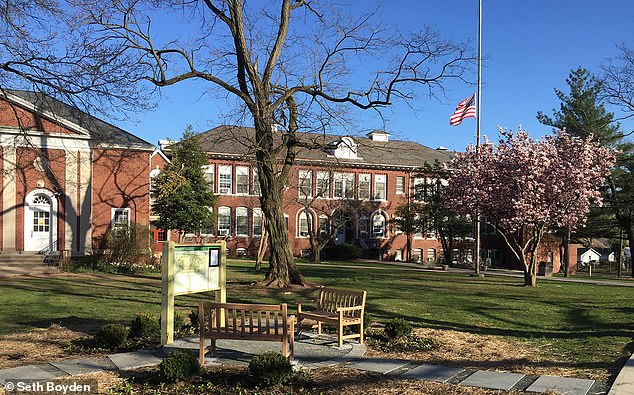 the South Orange Maplewood School District said it was investigating the incident, which occurred at the Seth Boyden Elementary School, in New Jesery

In a statement, the South Orange Maplewood School District said that it was made aware of allegations and began the investigation on Thursday.

‘We will utilize the existing District due process mechanisms to ensure fair and just outcomes based upon the results of our investigation. Any decision or outcome related to this will be reserved for after the completion of the investigation,’ the statement read.

The Council on American-Islamic Relations of New Jersey said it was troubled by the accusation, with Executive Director Selaedin Maksut describing it as ‘absolutely unacceptable’ as he joined others calling for the Herman’s termination. 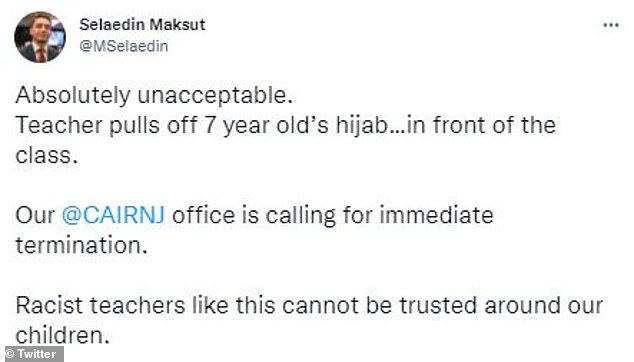 ‘Racist teachers like this cannot be trusted around our children, Maksut tweeted on Friday.

In a statement, CAIRNJ said, ‘Forcefully stripping off the religious headscarf of a Muslim girl is not only exceptionally disrespectful behavior, but also a humiliating and traumatic experience.

‘Muslim students already deal with bullying from peers, it’s unthinkable that a teacher would add to their distress.’