Olivia Wilde has been pictured out for the first time following reports of tension on the set of her upcoming psychological thriller Don’t Worry Darling emerged.

The actress, 38, who stars in and directs the film, was seen out in Los Angeles on Wednesday wearing a cropped ‘Flopp’ marshmallow T-shirt and black leggings.

Keeping her gaze down, she appeared slightly tense as she stepped out with a green ‘Sweet Pickle Books’ hat occasionally concealing her eyes.

Wrapped up in controversy: Olivia Wilde has been pictured out for the first time after alleged tension on the set of her upcoming psychological thriller Don’t Worry Darling was exposed

Also clad in a pair of black leggings, the Booksmart director flashed a hint of her svelte belly.

She carried a grey tote bag on her arm, her keys, and wore her sandy blonde hair down in natural waves.

At one point, she slicked her hair back into a ponytail.

The Drinking Buddies actress finished off the sporty look with a pair of black trainers.

Olivia and her upcoming film Don’t Worry Darling have been making headlines as of late with reports of tension with star Florence Pugh and disputed accounts of how Shia LaBeouf departed the film.

Shia, who was originally cast in the role Harry Styles ultimately took, recently publicly denied claims made by Olivia that he was fired from her movie Don’t Worry Darling due to his ‘combative energy.’

The actor instead insisted that he quit the project.

Backing up his claims, a video of Wilde was leaked online Friday that clearly shows the director begging LaBeouf to stay with the project, and she hints at tensions with his would-be co-star Florence by saying him leaving would be a ‘wake-up call to Miss Flo.’ 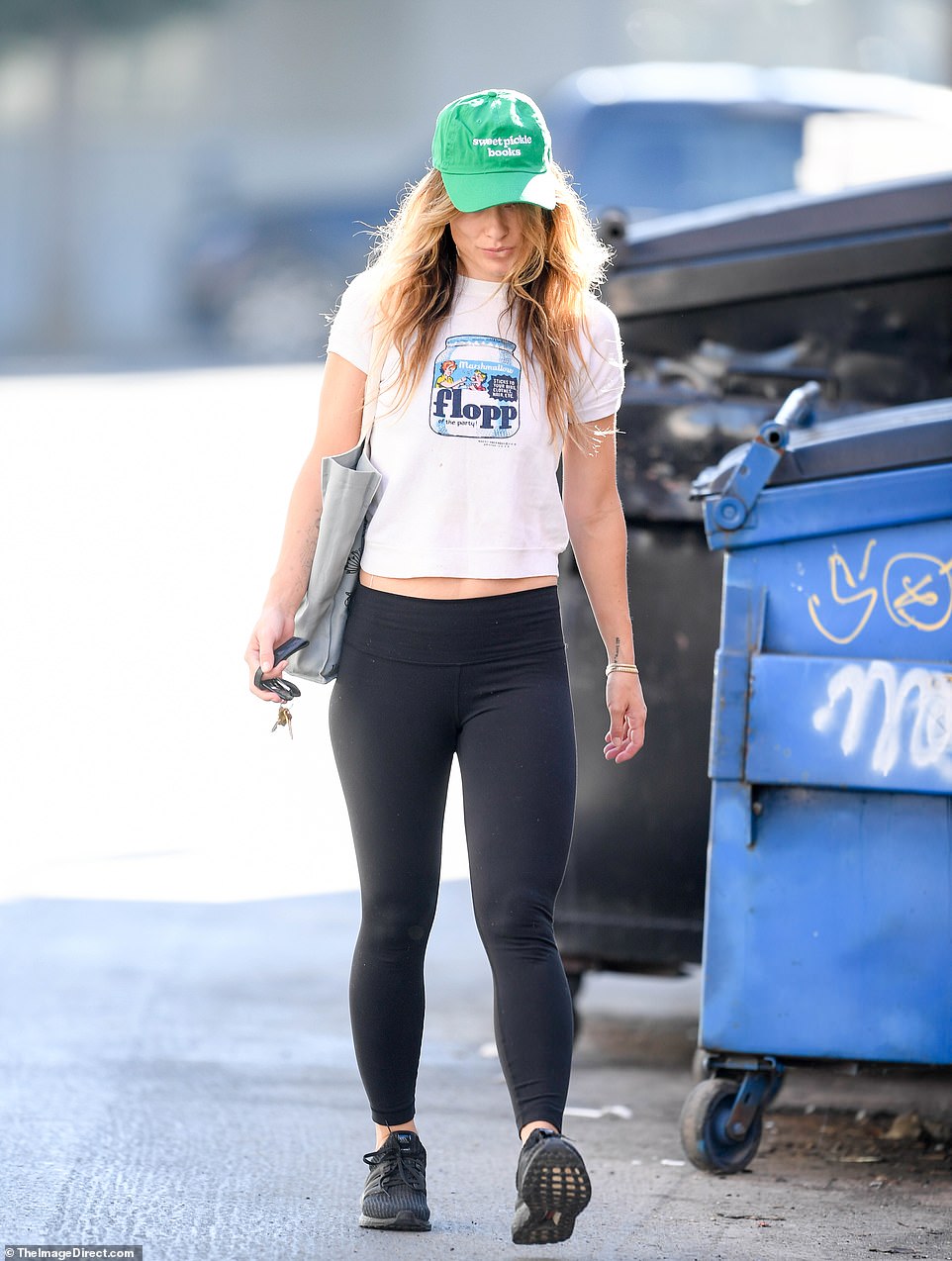 Svelte: Wilde put a glimpse of her abs on display in her cropped top

Last week, Wilde gave an interview to Variety where she said LaBeouf’s process was ‘not conducive to the ethos that I demand in my productions’ after the role was ultimately recast with her now-boyfriend Harry Styles.

Styles, 28, plays the character Jack alongside main star Florence, who is said to have had some ‘tension’ with LaBeouf.

However, LaBeouf has now supplied alleged evidence that refutes Wilde’s claims, including an email he sent to the director and a video that she sent to him, that was later leaked online, proving he walked away from the film.

LaBeouf claims he ‘quit the film due to lack of rehearsal time’ on August 17th in 2020, and forwarded Variety two emails that he claims he recently sent to Wilde.

In his messages to Wilde, LaBeouf states: ‘You and I both know the reasons for my exit. I quit your film because your actors and I couldn’t find time to rehearse.’

In the email, he references his troubled relationship with FKA Twigs and also spoke of his daughter Isabel who he shares with partner Mia Goth.

Some studio sources have claimed to the publication that LaBeouf had been fired, while another said it was down to a ‘collective recognition that LaBeouf’s style of acting wasn’t a good fit for Wilde’s approach as a director.’

Variety reports that LaBeouf sent the publication screenshots of his conversations with Wilde, which claim they met in person to discuss his exit from the project.

Drama: Olivia and her upcoming film Don’t Worry Darling have been making headlines as of late with reports of tension with star Florence Pugh and disputed accounts of how Shia LaBeouf departed the film

In the email to Wilde, LaBeouf acknowledges his relationship with Twigs, where he writes: ‘My failings with Twigs are fundamental and real, but they are not the narrative that has been presented.’

Twigs – real name Tahliah Debrett Barnett – accused LaBeouf in a lawsuit of knowingly giving her a sexually transmitted disease and also accused him of ‘relentless abuse,’ including sexual battery, assault and infliction of emotional distress. He has denied the claims.

It also comes as TheWrap reported Friday that Florence will only do one main piece of press to promote Olivia’s second feature as a director, suggesting the British star is distancing herself from the film.

‘Florence has been in Budapest filming Dune 2 and before that filming [Christopher Nolan’s] Oppenheimer,’ Pugh’s rep told the publication, adding: ‘She will be in Venice for the premiere coming off a night shoot in Budapest.’ 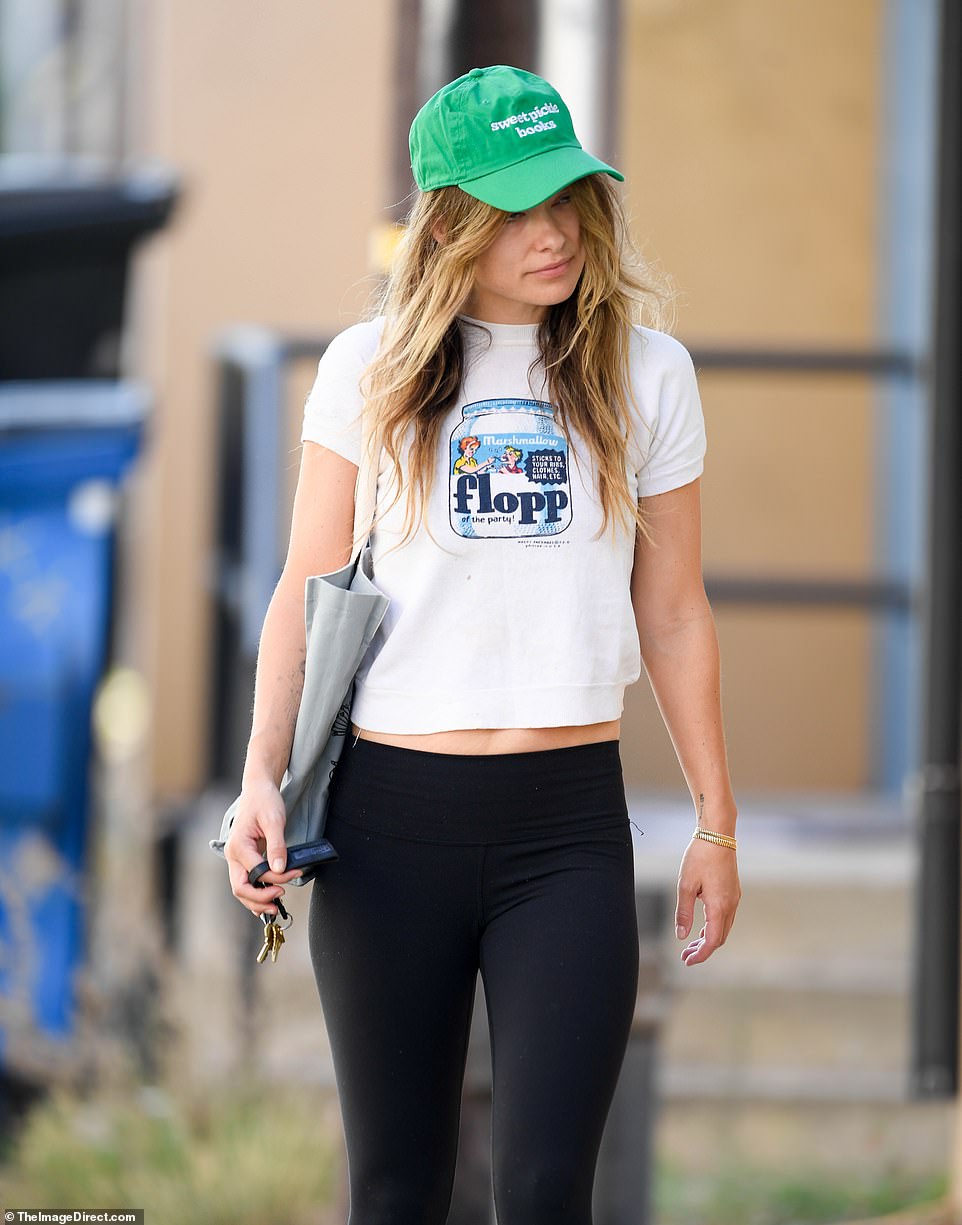 Love life: Olivia made headlines with Harry Styles in January 2021, when they were photographed holding hands at his manager’s wedding

The report adds that as it stands, the Venice Film Festival is set to be the only red carpet and press conference that Pugh is expected to attend.

‘She’ll be doing greetings for us from the set of Dune because she’s not doing press,’ a New Line Cinema executive added to The Wrap.

Florence was said to be unhappy with her Don’t Worry Darling co-star and director Olivia because of the way her relationship began with Harry.

Harry and Florence play a married couple in the sexually charged movie, which tells the story of a 1950s housewife living with her husband in a Utopian experimental community. Olivia appears as a character called Bunny. 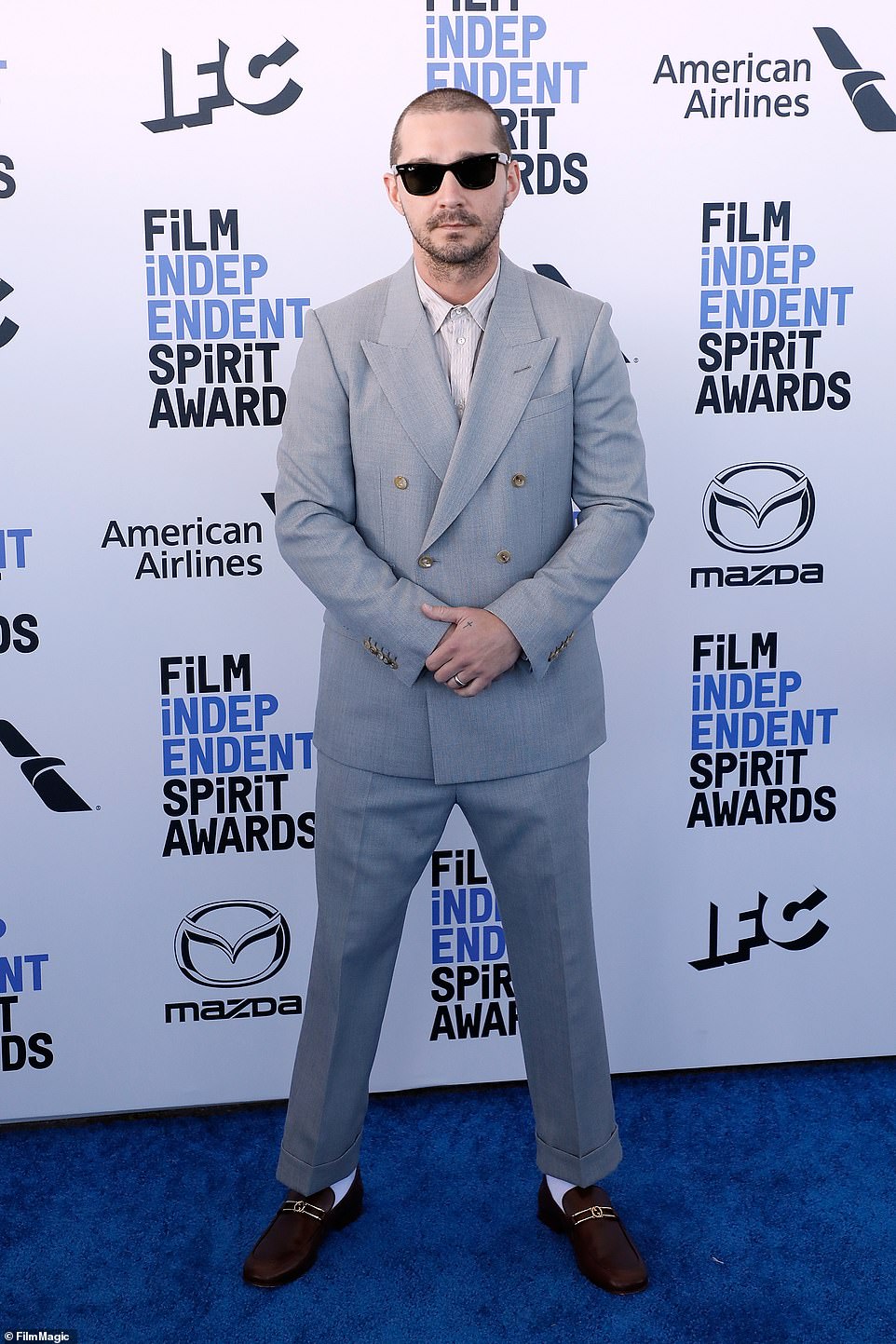 Olivia was previously engaged to Jason Sudeikis since 2012 and they share children Otis, eight, and Daisy, five.

But there is some confusion over timings because Olivia and the Ted Lasso star were thought to have split in November 2020.

Olivia made headlines with Harry in January 2021, when they were photographed holding hands at his manager’s wedding.

While it’s never been confirmed that Olivia and Harry’s romance began while she was still engaged to Jason, Page Six have reported that Florence has fallen out with Olivia over the coupling.

An insider told the site: ‘Flo seeing Olivia and Harry all over each other on set did not go down well as Olivia was still with Jason when she first hooked up with Harry.’

At the time, sources claimed the relationship with Harry was the main reason for the split.

One insider told the site that the affair with Harry had been ongoing for a month, leaving Jason distraught.

The insider added this week: ‘Jason and the kids visited Olivia on set at the beginning a few times, so I think this all made people feel a little uncomfortable.’

Coming soon: The film which also stars Chris Pine will be released September 23

MailOnline contacted a spokesperson for Olivia, Harry and Jason for comment at the time of original publication.

Fans have noticed that Florence has not praised Olivia as a director on the project.

She is said to have failed to ‘like’ a post in which Wilde included the full official trailer for Don’t Worry Darling last month.

Yet Olivia shared a picture of Pugh and wrote: ‘Watching this woman work was such a f–king thrill! Cannot wait to show you more. @florencepugh @dontworrydarling.’ 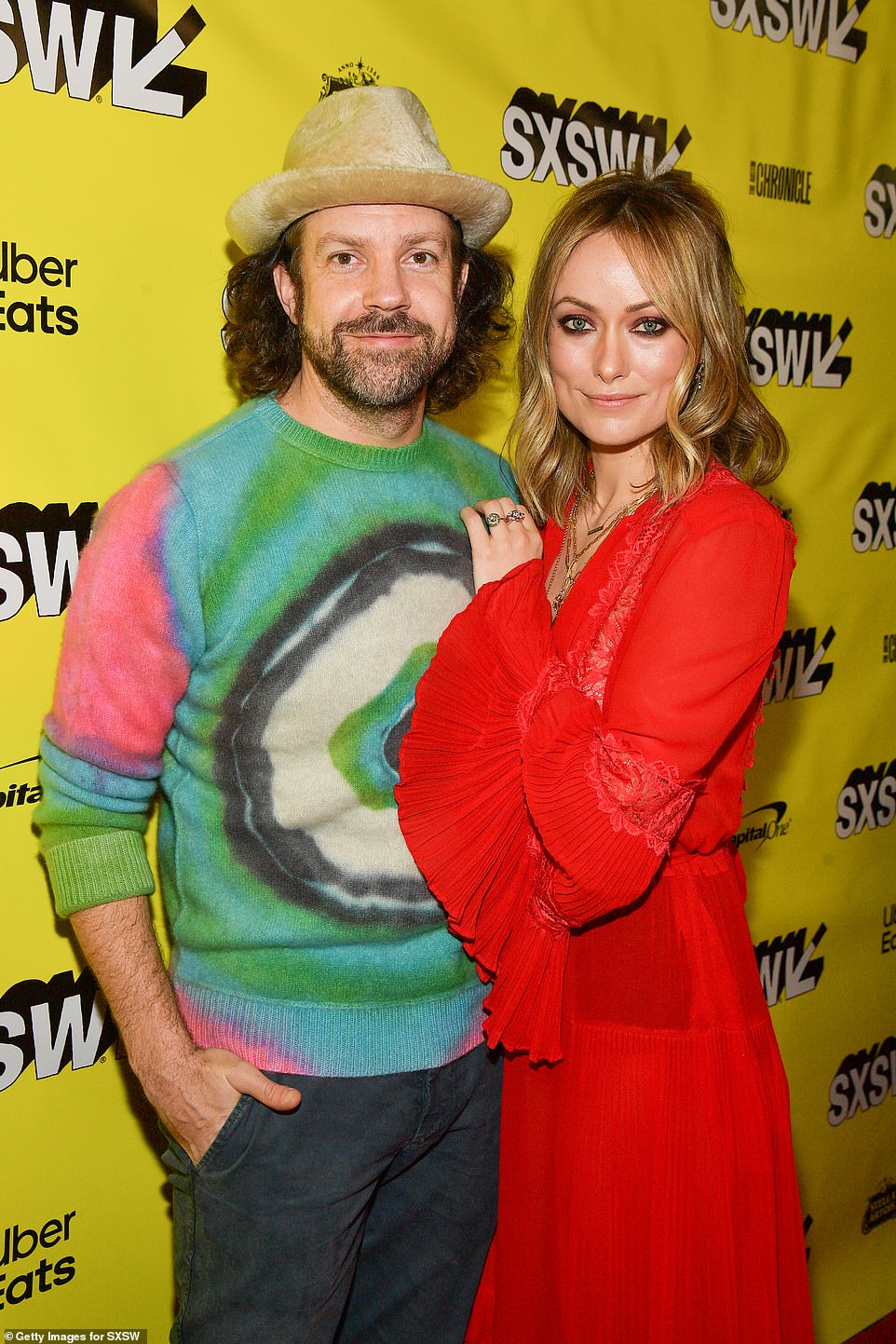 The way they were: Olivia was previously engaged to Jason Sudeikis since 2012 and they share children Otis, eight, and Daisy, five; pictured 2019

Florence didn’t respond but that same day posted a trailer for another new project, Oppenheimer.

One fan wrote: ‘The way Florence Pugh has yet to post about don’t worry darling even though there are two trailers out for it and yet she’ll post about every single other project that she’s doing right now like what did Olivia Wilde do ????’

However, a source told Page Six Florence was already scheduled to post about Oppenheimer that day for some specific reason and it had nothing to do with a response to Olivia

Olivia and Harry will soon step on the red carpet at the Venice Film Festival for the world premiere of the new movie and no doubt all eyes will be on them.