At the age of 48, most mothers are starting to look forward to the day their children fly the nest. Not me. I’m five months pregnant and, instead, keenly anticipating the joys of babyhood, first steps, toddler groups and all those years of doing the school run.

I shall be almost 60 by the time my son leaves junior school, and my partner, now 59, will be 70. Plenty of people think that’s too old, of course, and some have told us so to our faces.

But for us this baby is nothing short of a miracle. When I run my hands over my growing bump I honestly feel like the luckiest woman in the world to be pregnant at all.

For, just over 18 months ago, I found myself in a clinic in South-West London making the agonising decision to terminate an identical twin pregnancy. In an extraordinarily rare case, doctors discovered that both of our babies had Down’s syndrome and, with other highly complex problems, were very unlikely to survive.

Only one in a million pregnancies result in identical twins with Down’s — and the older the mother the higher the risk.

The moment I heard was a huge shock on many levels and the week between discovering how poorly they were and the termination itself was the hardest of my life.

And so, when I discovered I was pregnant again, one question consumed my every waking thought —was this child healthy or would my partner Perry and I have to make yet another utterly heart-breaking decision? 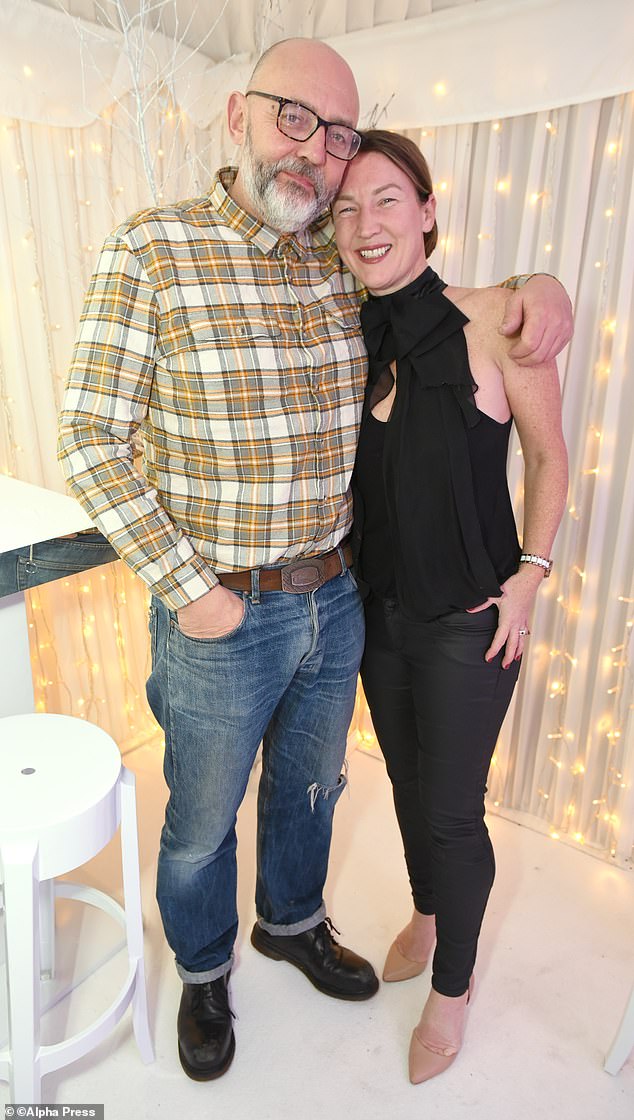 Happily expecting: Olivia and her partner Perry Joseph who have five daughters between them

We didn’t set out to have a baby together. Both divorcees, we only met 18 months before the little blue line appeared. Between us, we already have five daughters, aged between ten and 26, and adding to our brood was not high on our agenda.

Perry is in the process of setting up a new business, and as a self-employed journalist, my focus was on my career too. Besides, both of us were under the impression that conception at our age would be almost impossible.

While we were dating, I’d merrily thrown caution to the wind, convinced that in my late 40s I could at last afford to be carefree about contraception. It was in October 2018 that I realised how wrong I’d been.

Yet I was thrilled with the news. I’ve always loved babies and so has Perry — the pregnancy was a surprise, but a very welcome one. 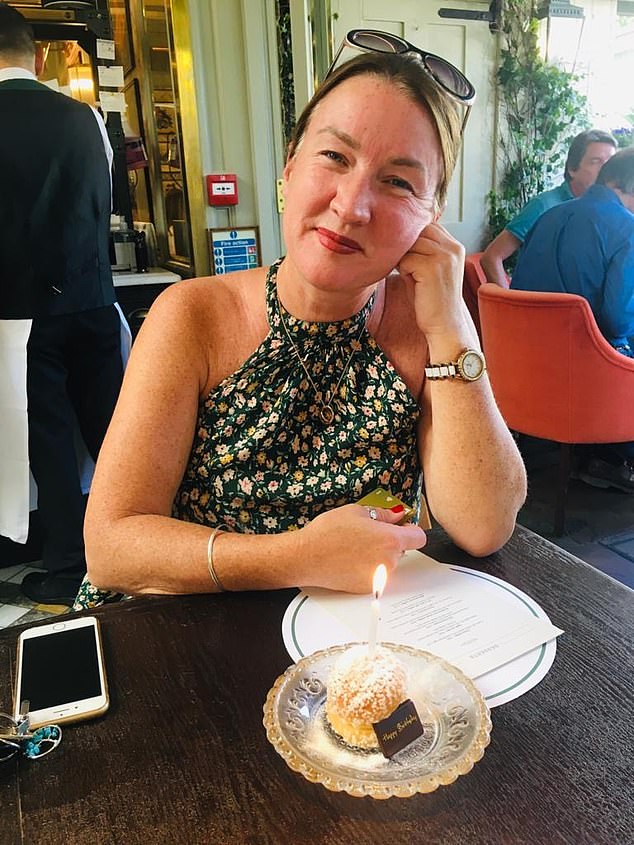 In October 2018 Olivia discovered that she was pregnant. Pictured on her 48th birthday

Even at my age, then 46, the 12-week ultrasound scan should have been routine. But I don’t think I’ve ever been through quite such a mix of emotions.

To be told you are pregnant with identical twins — girls! — is itself a life-changing moment. Then I saw the sonographer’s sober expression and I realised it did not match the joy I felt.

The scan showed an increased thickness on the back of the babies’ necks and unformed belly buttons, both signs of a chromosomal disorder. Deep down, I knew how bad this might be, but with Perry, I made light of it, clinging to hope like a life-raft. These scans aren’t always right, after all.

Immediately I was referred for a CVS (chorionic villus sampling) test to find out what exactly, if anything, was wrong with my babies. Feeling a little squeamish, I looked away while a needle was inserted through my stomach in order to take a cell sample from my placenta.

It took seven days for the results to come back and though I tried to distract myself with work, Perry and I thought and talked of little else. 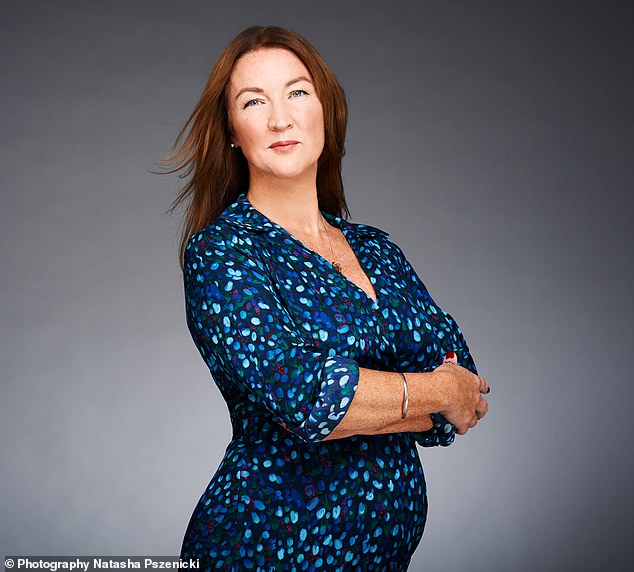 When the call came confirming Down’s syndrome, I went into a kind of denial, if I’m honest. It seemed too cruel.

Convinced there’d been a mistake, I sought a second opinion and booked a private appointment and ultrasound scan at The Fetal Medicine Centre on London’s Harley Street.

After a detailed scan — the twins were nearly 15 weeks by then — Professor Kypros Nicolaides could clearly see they had Down’s syndrome, and not only that.

One was so poorly, he explained, it looked like she might not survive much longer. When she died, it could cause the other twin to be brain damaged, so the surviving twin would be born severely handicapped. 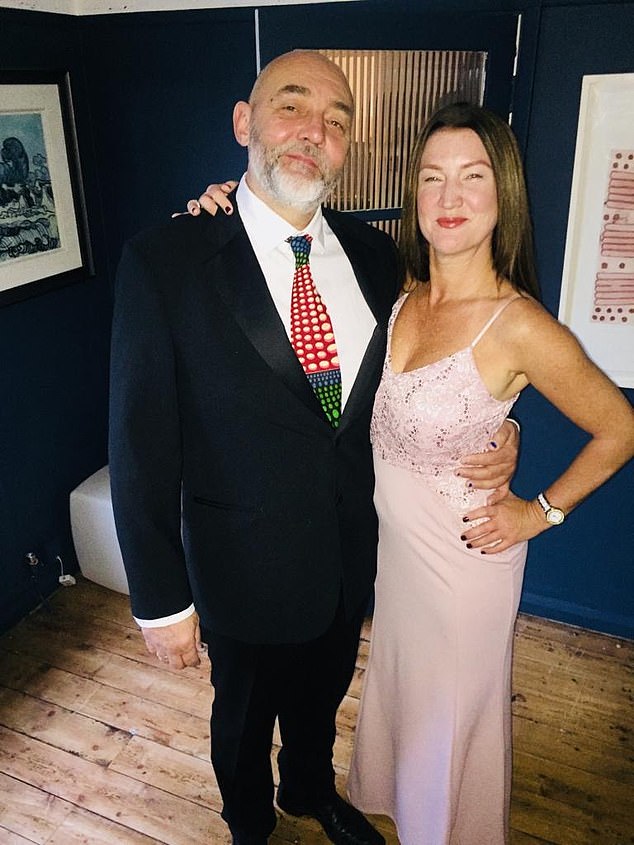 The pair did not set out to have a baby together at first, both having had children in previous marriages. However Olivia unexpectedly fell pregnant

As he spoke, it was as though the room shrunk around us and the walls moved inwards to crush me.

I was well aware that while many mothers go on to have beautiful Down’s syndrome children who lead happy and healthy lives, this would not be the case in my instance.

I wanted these girls so much and yet for their sake — and for the emotional well-being of our other children — we knew we couldn’t continue the pregnancy.

It was a shattering decision and for a week I barely slept. Why had I been blessed with a twin pregnancy for it then to be abnormal? I was so exhausted and emotional I couldn’t make sense of it.

And yet with hindsight, of course, though identical twins with Down’s are incredibly rare, my chances of having a baby with a chromosomal problem of some kind was reasonably high.

The risk rises sharply after the age of 35: one in 20 pregnancies in those over 45 result in a baby with Down’s syndrome compared to one in 1,250 in a 25-year-old woman.

It was the end of January 2019 and I was looking visibly pregnant when I arrived at the clinic in Twickenham for the termination. We wanted to get inside as quickly as possible but ‘pro-life’ campaigners stood in our way.

There were about a dozen in total, some gathered on the opposite pavement and a couple hanging directly outside the entrance to the pathway that led up to the clinic door.

One sign, which read ‘Love them both’, meaning mum and baby, caught my eye and made me shudder. Another protester waved rosary beads in Perry’s face as we tried to walk through the entrance and shouted: ‘Choose life!’ Perry quite rightly snapped: ‘You have no idea why we are here.’

After the operation, I felt utterly bereft. For months my mood was unstable, either flat and drained of all feeling or intensely emotional. It’s possible the twin pregnancy generated more hormonal instability, but I was also warned by doctors that after the termination, I could go hurtling into the menopause. I started to have hot flushes and began taking anti-anxiety medication.

Months later, as I began to come out of the fog of depression, Perry and I sat down for a heart-to-heart and decided we could never go through something like that again.

Christmas came and went, and we told one another how lucky we were to have each other. We didn’t need a baby to complete our relationship.

And yet deep down I think part of me still wanted it. Irrational as it sounds given the statistics and my age, unconsciously I hadn’t given up the desire for another baby. I decided not to take the pill because it gave me mood swings, convincing myself I had every menopausal symptom in the book and did not need to bother.

When I started to experience fatigue in May this year, I squashed a little joyful voice at the back of my mind. Lockdown was to blame I told myself — with exercise and normal sleep patterns out the window, everyone was feeling tired. Yes, my period was more than a week late, but that was surely stress or the perimenopause.

A few weeks later, I was in Poundland buying some snacks for my daughters when I saw a £1 pregnancy test. Almost without thinking, I grabbed it off the shelf and hid it in my basket.

Back at home, I sat on the edge of the bath for ages gazing at the faint double line that appeared on the stick.

It was my partner Perry’s 59th birthday, and I was worried about telling him because of what we’d agreed.

Yet as soon as I uttered the words, ‘I’ve got something to tell you’, he turned around, beamed, and said: ‘You’re pregnant . . . but I already knew that.’ He had clocked that my period was late and despite everything we’d discussed, he couldn’t be happier.

But was the baby healthy?

I was seven weeks pregnant. The thought of waiting another four weeks to get an ultrasound on the NHS was unbearable, so instead we found a private midwife who organised for me to have something called the Panorama test, which checks for all chromosomal disorders at nine weeks. She arrived at my house in full PPE kit to take two vials of blood and then sent them by FedEx to a laboratory in California.

Keen to take my mind off the impending results, I went away to Cornwall with my two girls.

Three days into our July holiday, an email landed with the results. It took hours for me to muster the courage to open that email, but when I did and registered the words ‘low risk’ against all the possible chromosomal disorders including Down’s syndrome, my heart leapt.

I rang Perry and both of us shouted: ‘Yes, yes, yes!’ down the phone to one another.

Further down the email, I saw that the sex was male. While we love our five daughters, Perry and I secretly longed for a boy.

The baby is due on January 29 and even though older mothers are at a higher risk of developing high blood pressure and diabetes, I am fine so far.

Yes, my bump feels much heavier this time around and I don’t feel as agile as I did in my two full-term pregnancies with my biological daughters Ella, now 13, and Amalie, ten.

But, having done it twice, I don’t feel nervous about the impending prospect of labour either (though Perry is 6 ft 3 in so I am a bit apprehensive about how big the baby might get).

My two girls are very excited about the pregnancy and can’t wait to meet their baby brother. Amalie keeps kissing my baby bump before her bed-time.

To those people — including my own parents — who say we’re too old to be buying nappies again, that the risks are too great, I reply that Perry and I have more than enough love for another child. We’re still energetic and we’re full of experience.

Indeed several older mums of teens have confessed they’d love another baby. One even confided she and her husband had been trying for baby number three for the whole of her 40s. It had never happened for them and she envied me my luck.

After all we’ve been through, I couldn’t agree more.