Britain’s oldest pub that has been serving customers for more than 1,200 years is ‘fighting for survival’ as the cost of living crisis threatens to cripple businesses around the country.

Ye Olde Fighting Cocks in St Albans, Hertfordshire, claims to have been in business since the year 793AD – before England was united under one monarch.

Now, despite surviving the English Civil War, 17 recessions, two World Wars and five pandemics, including the Black Death and Covid, the historic boozer is facing ruin due to spiralling energy costs.

The historic pub was forced to enter administration in February due to the financial impact of Covid and was bought over by new owners.

Now, the alehouse is again struggling as it faces the combined blows of the cost of living and energy price crises, made worse since rocketing gas prices around the world – which increased further after Russia’s invasion of Ukraine earlier this year.

Sam Walker, 39, is one of the co-owners of the Ye Olde Fighting Cocks pub in St Albans, Hertfordshire 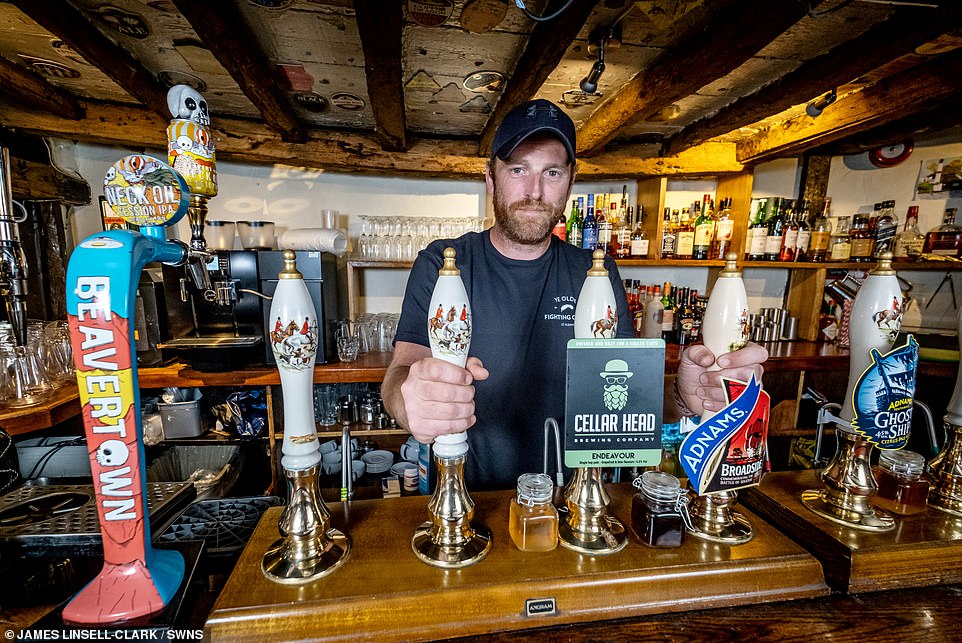 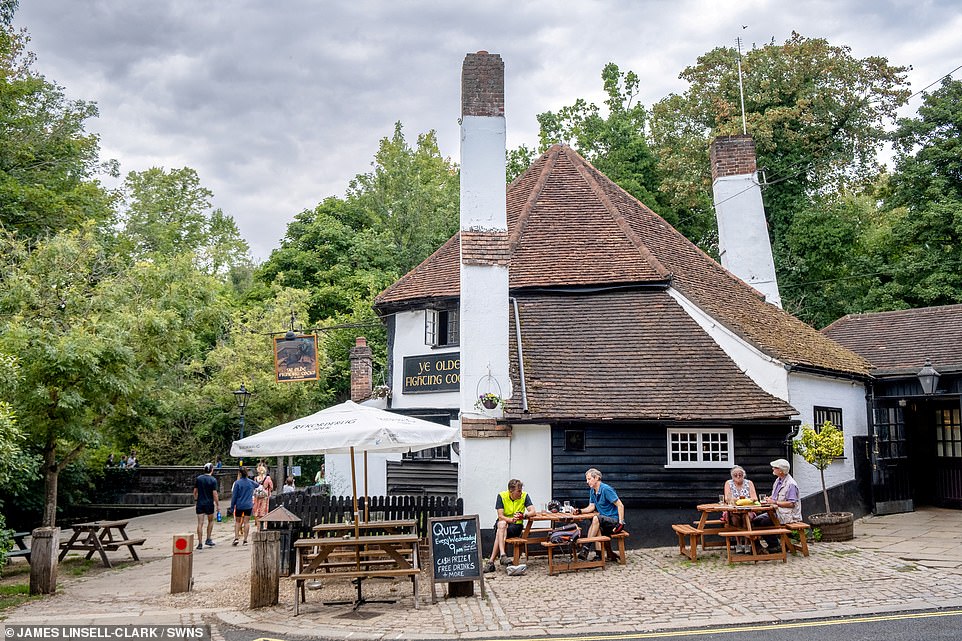 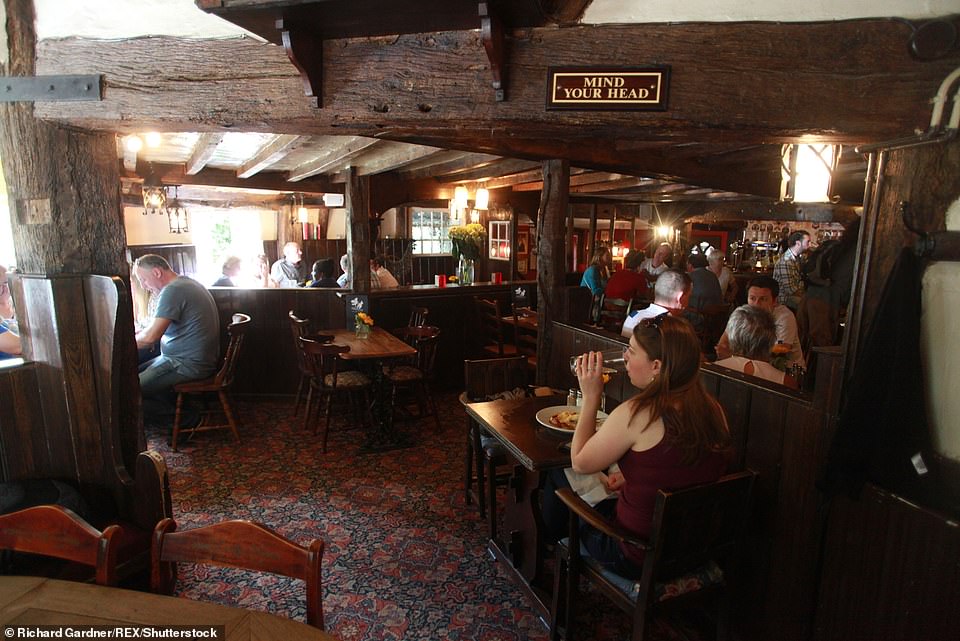 Ye Olde Fighting Cocks reputedly has a tunnel leading to nearby St Albans Abbey that was used by monks, and Oliver Cromwell is said to have spent a night there

Turmoil pub had survived before Covid

Recent research warned that up to three-in-four of Britain’s pubs are at risk of closing this winter due to rising costs.

‘It’s not like at home where you can turn everything off but the fridge and freezer, we’ve got certain things that need to stay on for health and safety and general upkeep.

‘And our light bill is 10 times more than what it is in a house because at home you can turn off all the lights except the one you’re in. But you can’t do that in a pub.

‘So we don’t have a choice, we can’t really cut down on energy bills but we are being charged double the amount.’

Now with winter on its way, Mr Gaffney warned pubs will see extra costs, and for many, less customers.

He added: ‘Winter for a lot of pubs, like my own, is the quiet season.

‘If pubs don’t have an infrastructure or financial backing then I can imagine that a lot of them will struggle.’

When the business was originally established in the 8th century it was known as The Round House, but there is no record of it being licensed as a public house under that name. 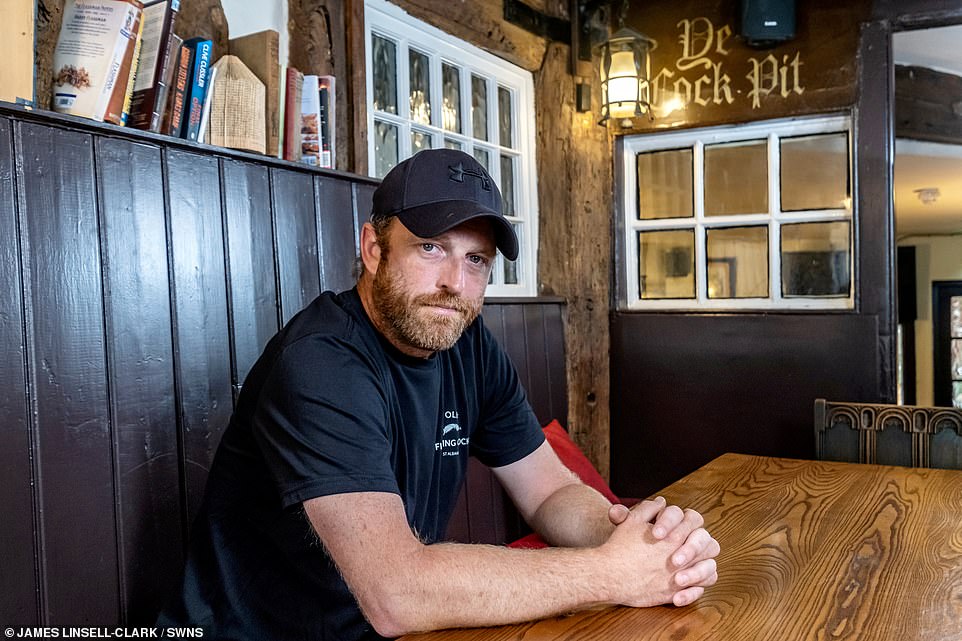 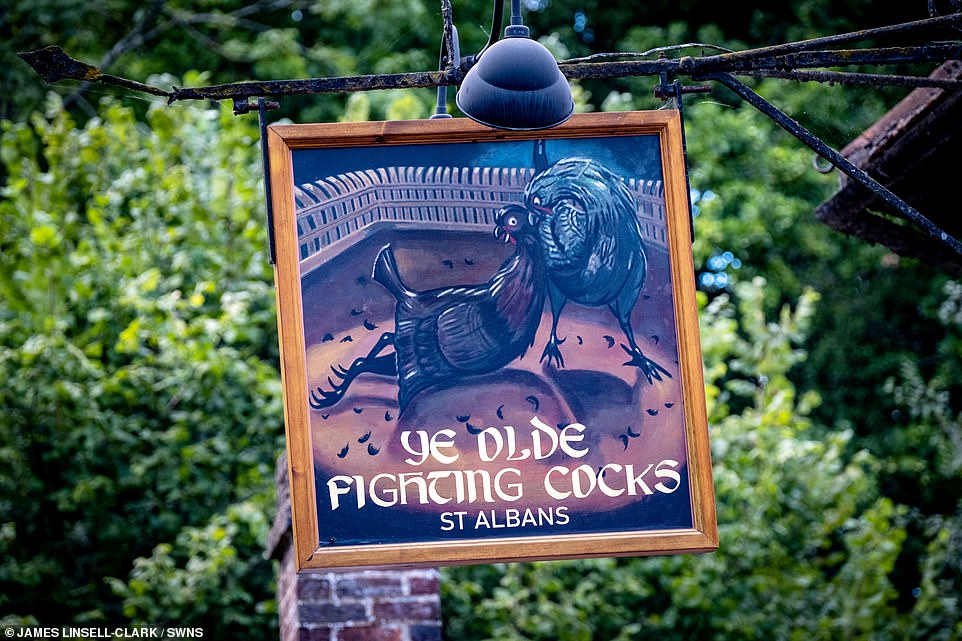 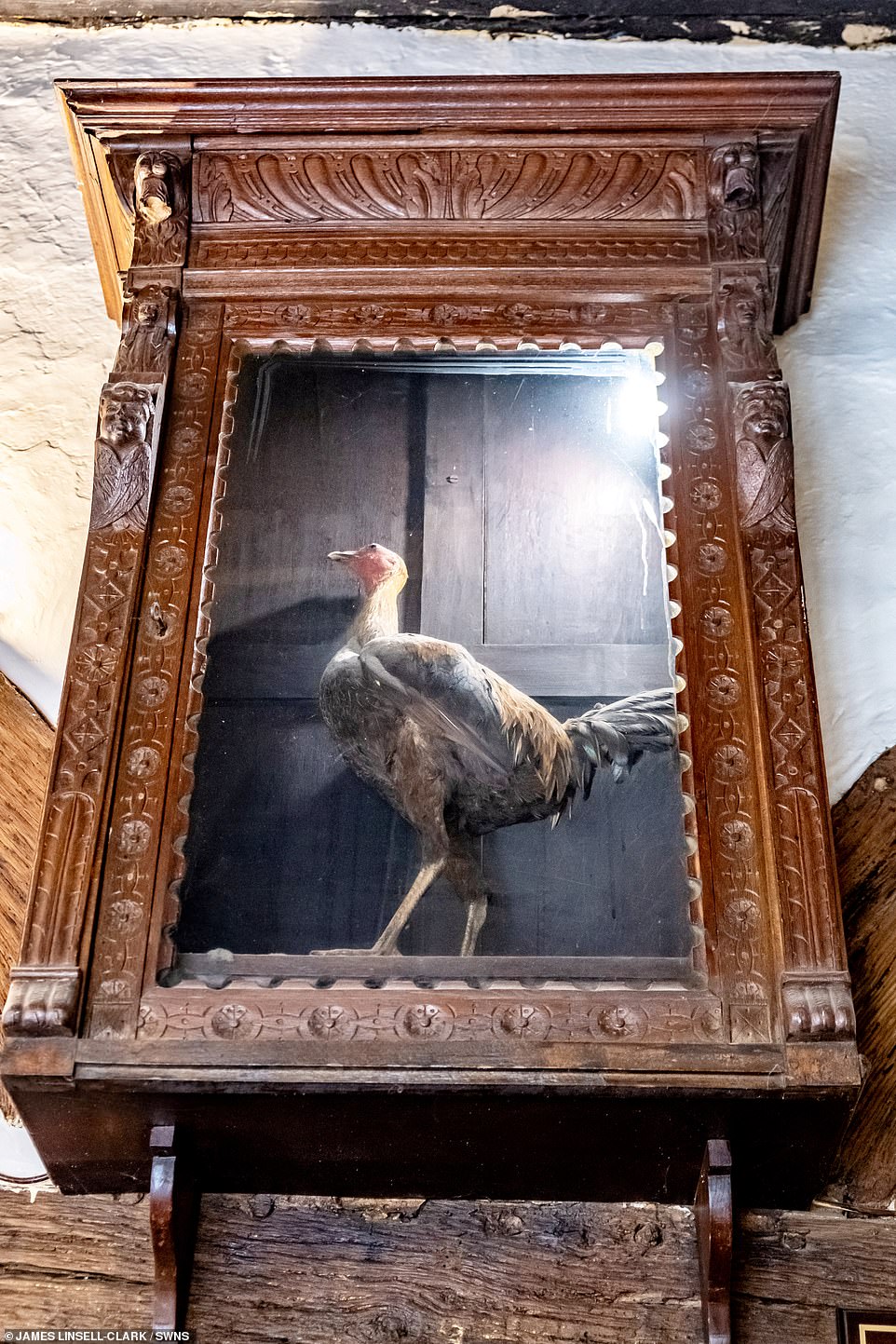 The pub’s centuries of history are commemorated inside its unique building, thought to once hold cock fights in the 19th century

Secret tunnels, Oliver Cromwell and a Saxon king: The colourful past of Ye Olde Fighting Cocks

Ye Olde Fighting Cocks is one of several pubs claiming to be the oldest in Britain, with rivals including Ye Olde Trip to Jerusalem (1189?) Ye Olde Man & Scythe in Bolton, which is mentioned in a charter from 1251.

Historic England describes the building as ‘of 16th-century appearance’, although the owners say it dates back to the 11th. Its octagonal shape is due to its original use as a pigeon house – hence a document from 1756 giving its name as ‘The Three Pigeons’.

The pub has had its current name since 1872 due to its history of cock fighting, a sport which was banned outright in England and Wales in 1835. At other points it was known as ‘the Round House’ on account of its shape.

Interesting features inside the building include an original bread oven, while there are reputedly tunnels stretching from the beer cellar to St Albans Abbey. Other claims made by the owners include that Oliver Cromwell slept there for a night during the Civil War, and that the foundations incorporate parts of the Palace of Offa, King of the Mercians.

The first known reference to it being an alehouse is in 1756 when it appears to be trading as The Three Pigeons.

In around 1800 its name was changed to the Fighting Cocks, thought to be a reference to the sport of cock fighting that was popular at the time and which may have taken place in the main bar area.

The historic pub is one of around 10 boozers which claim to be the oldest in Britain.

Mr Gaffney said it is going to be a challenging time for pubs across the UK and it is a problem that can only be solved by those in authority.

He called on the government to take action as the energy cap is due to be increased again, squeezing household and businesses even further.

The publican added: ‘Pubs have done all they can since the start of the pandemic.

‘They have been up in arms for the last three years and nothing has been done about it.

‘The only thing to do now is to keep appealing to the government as it’s not just pubs that have been messed around, it is everyone.’

An industry leader warned earlier this week that pubs and breweries are facing a disaster ‘more devastating than the pandemic’.

Business leaders from across the industry have signed an open letter to the Government and Conservative leadership candidates calling for urgent help before it’s too late.

Emma McClarkin, chief executive of the British Beer and Pub Association, believes that pubs that ‘weathered the storm’ of Covid now face closures and job cuts.

‘It could have a worse impact than the pandemic.

‘Publicans are between a rock and a hard place. They are trying to cover their costs, but they also have customers who are tightening their belts. It’s completely unsustainable.’ 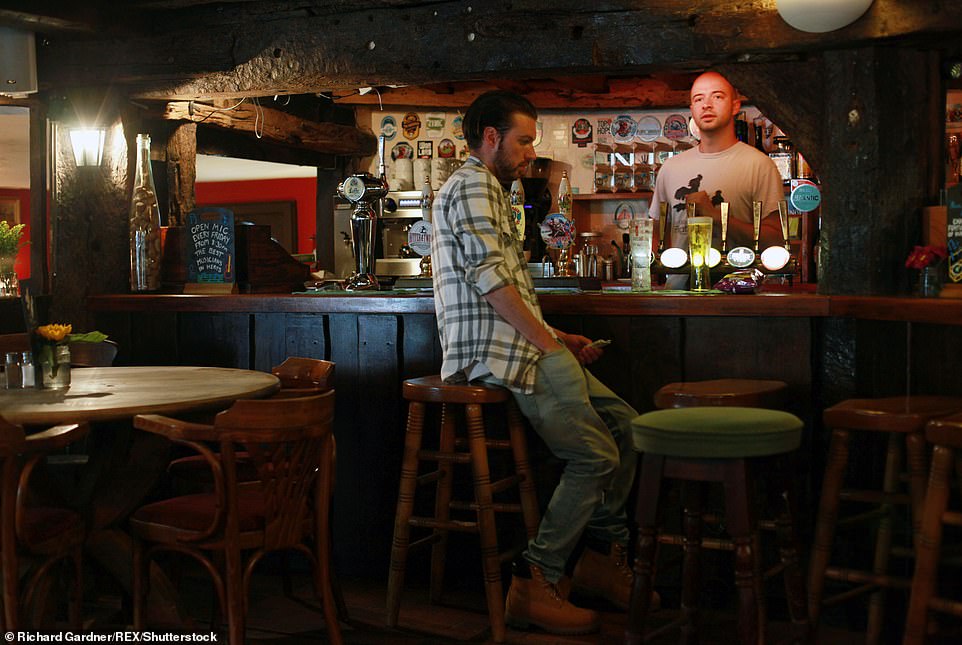 The pub’s manager called on the government to take action as the energy cap is due to be increased again, squeezing household and businesses even further. Pictured is an interior shot of the bar 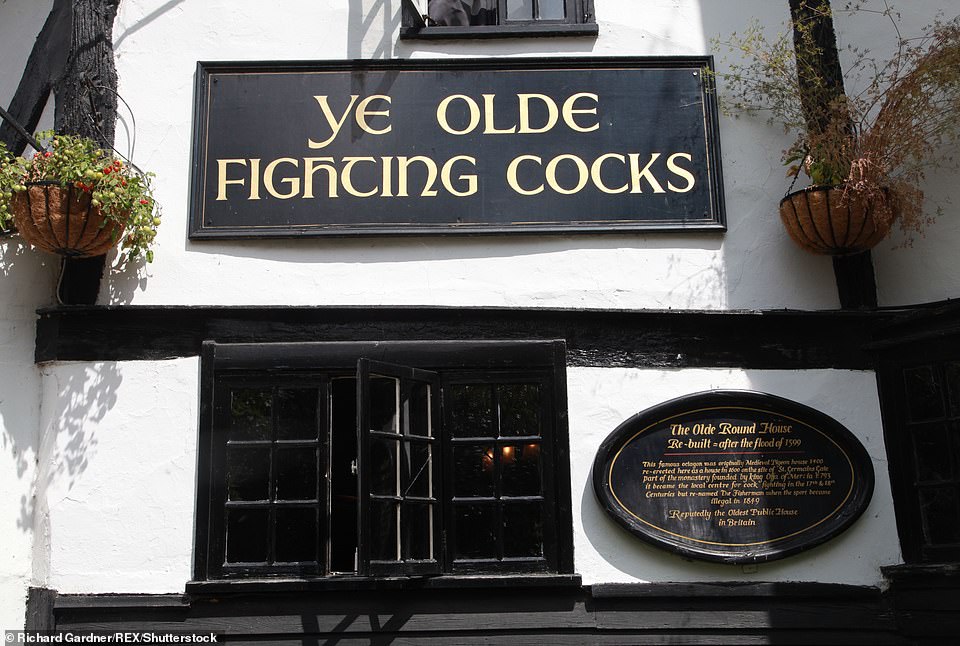 The pub is said to date back to AD793, which would make it the oldest in England, according to Guinness World Records. At one point it was known as ‘the Round House’ due to its shape