Body and dash cam footage has been released by Oklahoma City Police showing a suspect leading officers on a wild car chase along the interstate after allegedly killing a cop.

Benjamin Plank is accused of shooting two Oklahoma County deputies and killing one of them while they served him with an eviction notice at his home.

Plank managed to get away from the scene resulting in a high-speed car chase with him driving a grey truck whilst towing a speed boat.

Dramatic video footage has been released of the chase and the moments leading up to Plank’s arrest.

‘Officers attempted to stop the suspect but he refused to stop for the officers initiating a pursuit. At one point, the suspect stopped his vehicle at an angle next to a semi-truck. 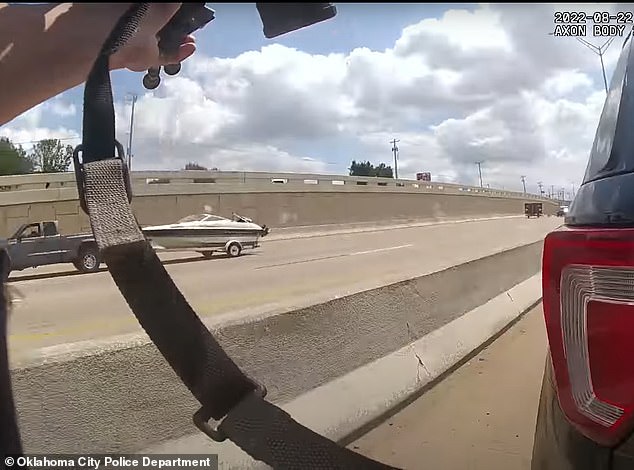 At one stage, police attempted to use a rifle to stop Plank in his tracks, but failed 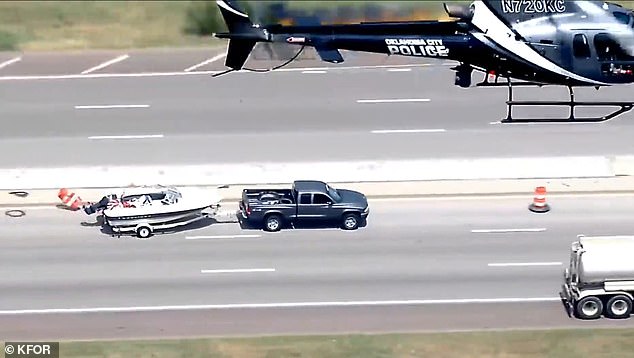 At one point, a deputy tried to smash into the rear of the boat in order to cause the pursuit to come to an end but the suspect kept on driving.

‘While entering onto the highway, the suspect vehicle swerved, hitting a sergeant’s vehicle. While driving north on Interstate 35, the suspect fired at an Oklahoma County deputy striking his vehicle. The suspect continued to fire his gun at officers,’ continued Littlejohn as she described the footage.

Another officer who was parked up on the shoulder of the interstate then fired a rifle as Plank drove by while a second deputy fired from inside his vehicle towards the fleeing truck. 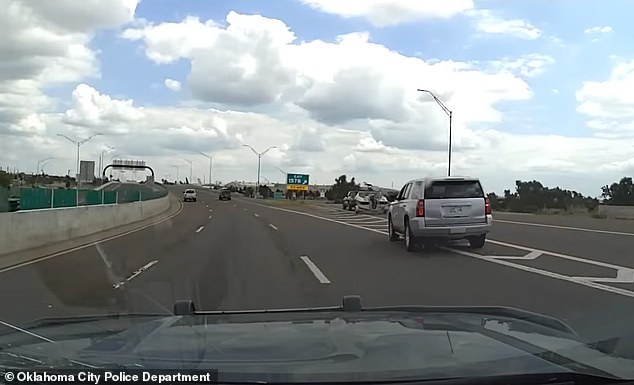 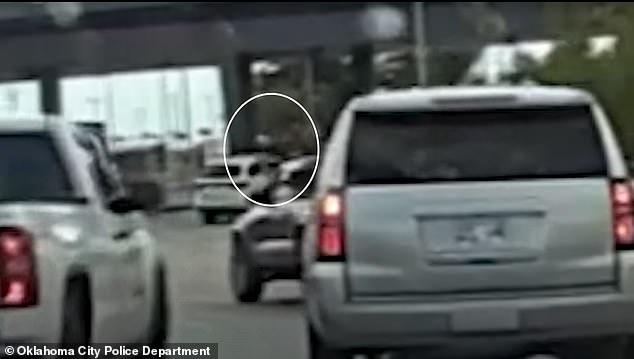 ‘The suspect swerved the outside shoulder of the highway, but then continued north,’ said Littlejohn.

Plank eventually stopped outside Tinker Air Force Base, dropped the rifle he was carrying and got out of the truck.

It is unclear why he drove to the Air Force base. A swarm of officers, all wearing protective vests, were seen pulling a shirtless Plank in the back of unmarked police SUV.

On bodycam footage an officer can be seen running to the scene as deputy slams Plank to the ground, while another points a gun at him. 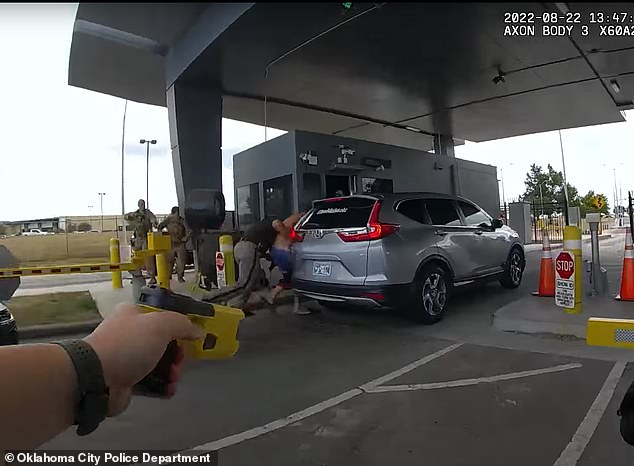 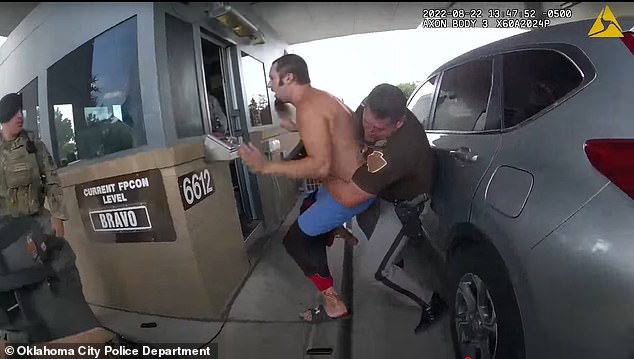 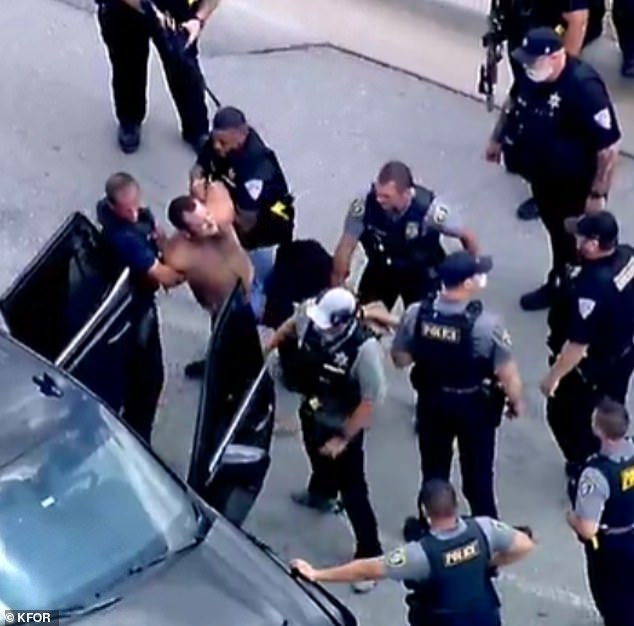 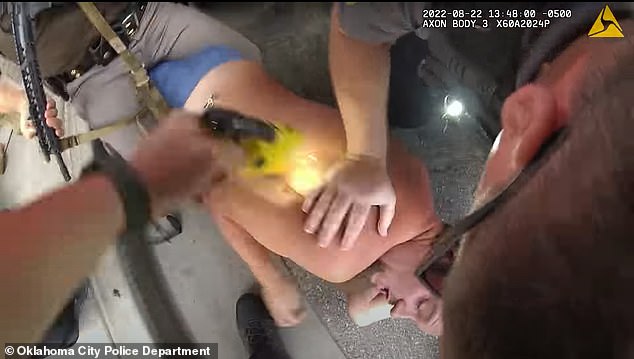 ‘Deputy Bobby Swartz, who was with the Oklahoma County Sheriff’s Office for 25 years, did not survive his injuries. Deputy Mark Johns was critically injured and treated at an area hospital. Deputy Johns was released several days later from the hospital,’ said Littlejohn.

Several firearms were found in Plank’s car. He was uninjured.

Plank was charged with suspicion of first-degree murder, shooting with intent to kill, assault and battery with a dangerous weapon and use of a vehicle in discharge of a weapon.

During a search warrant executed over the weekend Oklahoma City police found guns and hundreds of live rounds of ammunition inside Plank’s property.

Plank’s truck and boat have been seized as evidence, according to NewsOn6.

A stockpile of weapons and ammunition were found in the boat including two loaded AR-15s, three loaded pistols, more than 900 live rounds of ammo and 25 shotgun shells.

A receipt for the purchase of a firearm was also found together with six bullet casings.

‘He was planning on killing any law enforcement that came to house,’ said Oklahoma City Police Department chief Wade Gourley.

‘When the pursuit was over there was a bag found inside that boat. Inside that bag there were multiple firearms and lots of ammunition. He was definitely ready for a confrontation,’ Gourley explained noting how the officers were effectively ambushed.

‘[It] was very planned out and very cowardly. Those officers didn’t have a chance.’

Both have been placed on administrative leave as the investigation proceeds. 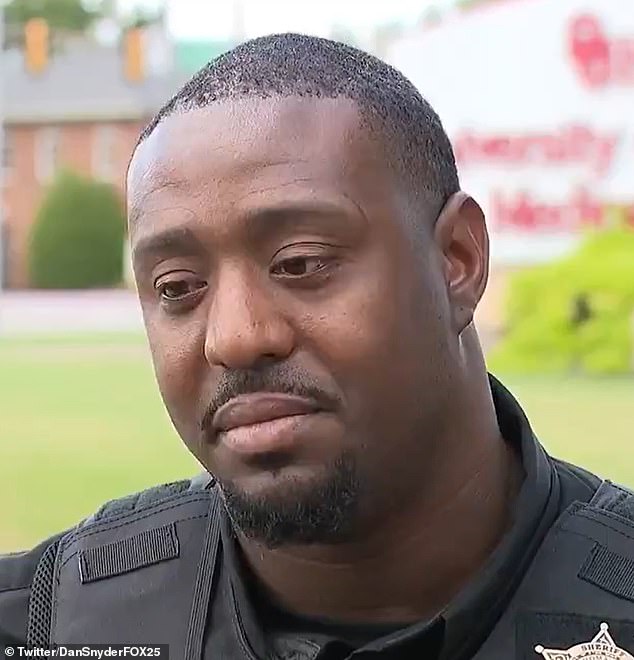 Days after the shooting of Deputy Swartz, a fellow Oklahoma sheriff broke down in tears while discussing the devastating loss of one of his officers.

Oklahoma County Sheriff Tommie Johnson grew emotional as he recalled how Swartz was the first deputy to be shot and killed in the county since 1935.

Swartz had been in law enforcement since 1997 and served in the Army Reserve prior to that. He also received an award for saving a man run over by a truck in 2020 while he was off duty and was recently promoted to sergeant in March.

‘Law enforcement is a tight community and I’m so thankful they were screaming across for my guys,’ Johnson said as he sobbed and turned away from the camera.

Swartz was alongside two other officers after a family member had filed a victim protection order against Plank last month, according to KFOR.

The unidentified homeowner reportedly tried to evict Plank for owing $1,500 in back rent and a judge granted the eviction. 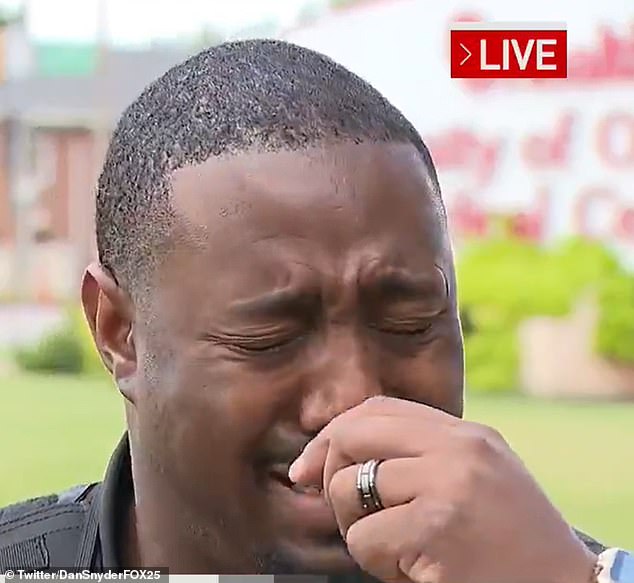 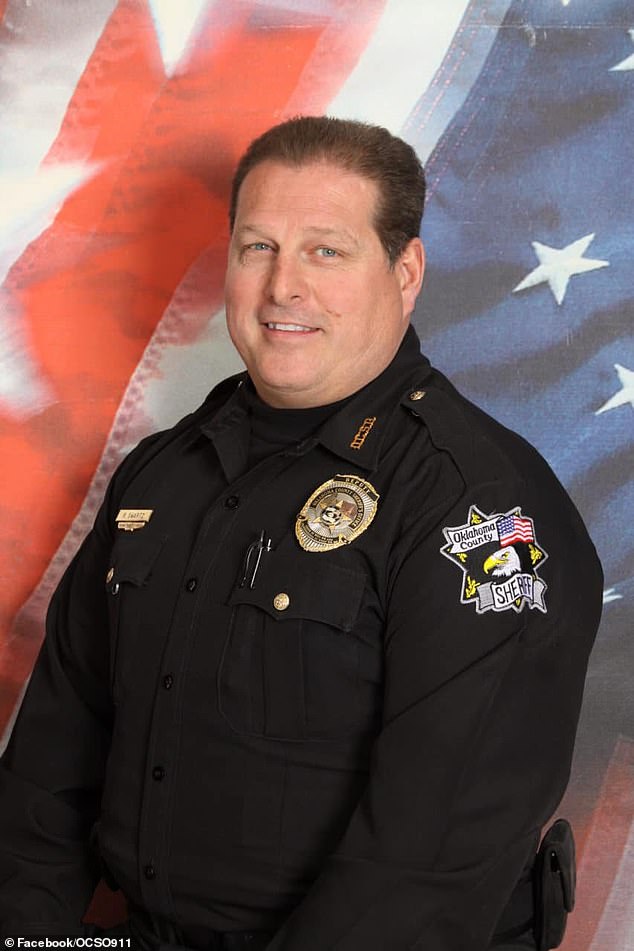 Sergeant Bobby Swartz was fatally shot in the line of duty. Swartz was the first deputy to be shot and killed in the county since 1935

Officers made contact with Plank at the front door before moving to the backdoor, where he reportedly opened fire. It is unclear why they moved to the back of the house.

‘They went around to the backdoor, and that’s when the shooting began,’ Johnson said at the press conference. ‘[The suspect] shot the first deputy. The second deputy tried to get that deputy out of the way of gunfire, and then he was struck as well.’

At least one deputy returned fire, according to the OKCPD Captain Valerie Littlejohn. The third officer was uninjured. 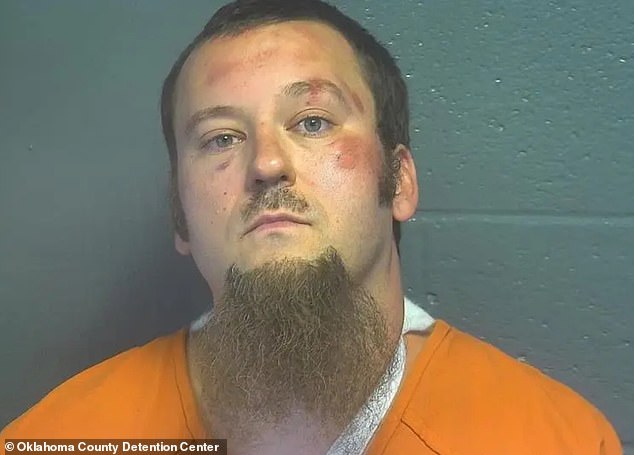 Suspected shooter Benjamin Plank (pictured) was booked into the Oklahoma County Detention Center on suspicious of first-degree murder. shooting with intent to kill, assault and battery with a dangerous weapon, and the use of a vehicle in discharge of a weapo

Plank has been booked into the Oklahoma County Detention Center on suspicious of first-degree murder, shooting with intent to kill, assault and battery with a dangerous weapon, and the use of a vehicle in discharge of a weapon, according to KFOR.

The Oklahoma County Sheriff’s Office announced on Facebook that it be leaving a patrol vehicle at 2101 NE 36th Street for anyone who would like to leave a message for the fallen sergeant.

‘We understand the community is sharing in our loss and we appreciate your prayers and kind words,’ the office wrote.

Governor Kevin Stitt also wrote that he had spoke with Johnson and offered his condolences to the force. 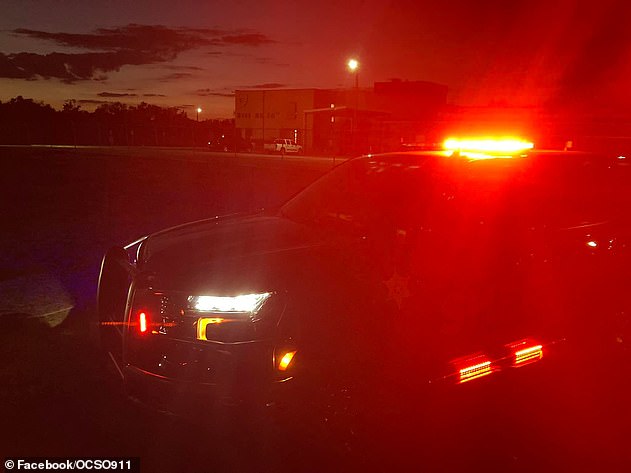 After the officer’s death, the Oklahoma County Sheriff’s Office left a patrol vehicle on a street corner for locals to leave a messages for the fallen sergeant