It has been a volatile week for oil prices as investors weighed global growth concerns, but City forecasters say prices could soon return to levels not seen since mid-2022.

UBS analysts said on Thursday they expect to see Brent Crude oil prices rebound from losses in the second half of last year to $110 a barrel in 2023, as the fallout from the Ukraine war and ‘chronic’ underinvestment in capacity persists.

With Brent Crude oil prices currently standing at roughly $79.18/bbl at the time of writing, such a rise would be substantial and likely spark concerns that energy market-driven inflationary pressures will continue for the foreseeable future.

Volatile: Oil prices soared as high at $128 in the wake of the Ukraine war, but fell rapidly in the latter half of 2022

Oil prices initially came under pressure early in the week before staging a comeback as markets weighed a rapid rise in Chinese Covid-19 infections with the potential for the country’s economy to fully reopen from pandemic curbs.

In a research note, UBS said it expects oil prices to continue to climb in 2023.

‘We continue to believe that the energy problems of 2022—like redirected Russian supply and chronic underinvestment in upstream capacity—are likely to persist in 2023, and we expect crude oil prices to rise to $110/bbl this year,’ it said.

The Swiss banking giant forecasts demand to be driven by Asia, with three-quarters of global demand growth coming from ’emerging Asia’, which includes countries like China, India, Indonesia and Korea.

UBS also highlighted that OECD countries are refilling their oil reserves, while the EU’s ban on Russian imports remains in place, which will also add to demand.

UBS said: ‘This should result in strong year over-year demand growth, even though the reopening is likely to be bumpy in the near term with occasional setbacks.’ Head of commodities strategy at ING Warren Patterson agrees ‘the outlook for the oil market remains bullish,’ but has forecast a more conservative Brent Crude price target of ‘a little over $100/bbl over 2023’.

He said: ‘China’s Covid policy change should prove supportive for demand in the medium to long run, although admittedly rising Covid infections could weigh on demand in the immediate term.

For the moment, analysts seem inclined to believe that oil – and gas – prices are going to fall in 2023 and 2024

‘Russian oil supply is still expected to fall due to the EU ban on Russian seaborne crude and refined products. As a result, the oil market is expected to tighten from the second quarter onwards.’

However, AJ Bell investment director Russ Mould explained that these views are not market consensus and, ‘for the moment, analysts seem inclined to believe that oil (and gas) prices are going to fall in 2023 and 2024’.

This is primarily because markets expect ‘a one-third fall in operating profit from the West’s seven oil majors between 2022 and 2024’, according to Mould, ‘equivalent to a drop of $120billion (and that is before any change in interest bills or taxes’.

The forecast fall in operating profit is driven by expectations of falling demand as a result of a looming recession, the potential for peace in Ukraine, strong European storage levels, and ‘the long-term trend toward renewables’, Mould said.

Brent crude oil prices soared in the first half of 2022 at the outbreak of the Ukraine war, touching $128 a barrel in March.

But the 25 per cent downward spiral in oil prices in the latter half of 2022, which saw Brent Crude finish 2022 at around $82, has aided optimism that inflationary pressures have peaked and will begin to normalise this year.

The energy price shocks of the last year have been the major driver of global inflationary pressures and have themselves largely been driven by the impact of the Ukraine war.

Therefore central bank rate hikes, which are intended to minimise inflation by squeezing demand, are to an extent a blunt instrument in tackling the underlying factors behind prices rises.

Rathbones data shows how the gas price shock was felt more acutely in Europe than in the US. 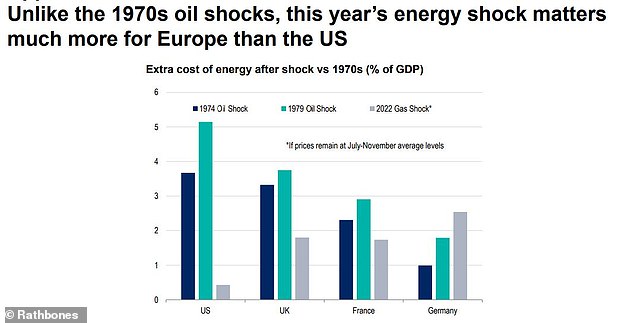 Extra cost of energy: The US was worse impacted by oil shocks in the 1970s, but today European countries are bearing the brunt Ed Smith, co-chief investment officer, explained: ‘It’s not about intensity of use – roughly a third of European electricity generation depends on gas compared to over half of US generation. It’s simply a matter of prices. At their peak last year, European gas prices had increased over 14-fold while US gas prices had increased less than four-fold.

‘Because liquefaction and shipping are expensive processes, the market for gas isn’t fully integrated globally in the ways that other commodities often are. Therefore supply shocks act more regionally than globally.’