Six of the world’s largest oil companies have raked in almost £250billion in profits so far this year.

As the industry cashes in on high oil and gas prices, BP and Saudi Aramco became the latest firms to post bumper earnings.

London-based BP reported third-quarter profits of £7.1billion – up from £2.9billion a year earlier.

Bumper profits: Aramco, which is headquartered on the Persian Gulf in Saudi Arabia, banked profits of £37bn in the third quarter

Aramco, which is headquartered in Saudi Arabia, banked profits of £37billion, the second largest haul in its history and up from £26billion in the third quarter last year.

The figures took profit at Aramco to £113billion in the first nine months of the year, while BP made almost £20billion.

Rival oil giants Shell, Total-Energies, ExxonMobil and Chevron have also reported booming profits in recent days – taking the total among the six to almost £90billion in the third quarter and more than £246billion since the start of the year.

It fuelled calls for windfall taxes on the industry amid a backlash from politicians looking to raise money to fund government spending and the public facing soaring energy bills.

This week, US President Joe Biden accused firms of cashing in on the invasion of Ukraine, which has seen oil and gas from Russia choked off and sparked a surge in global energy prices as demand outstrips supply.

‘It’s time for these companies to stop war profiteering,’ he warned. Biden has threatened to impose a levy on companies unless they increase output and cut prices for consumers.

‘At a time of war, any company receiving historic windfall profits like this has a responsibility to act beyond the narrow self-interest of its executives and shareholders,’ he added.

But the surge in profits has been a boon for savers and pension funds with money tied up in the sector – boosting the retirement pots of millions.

Posting its third-quarter figures, BP outlined plans to buy back another £2.2billion of its shares and pay shareholders a £5.2billion dividend, 10 per cent higher than the same period last year. 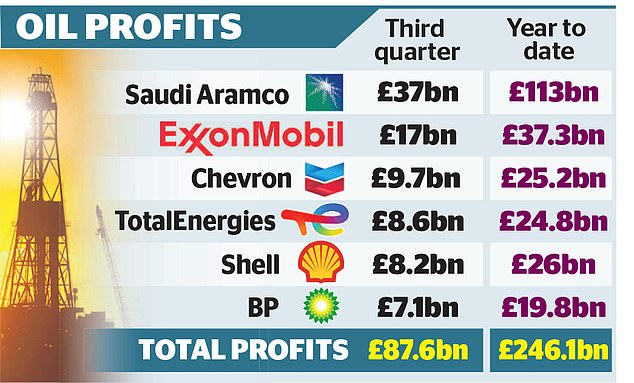 The strong results at Aramco, the world’s largest oil company, allowed it to retain its £16.3billion quarterly dividend. The payout will go mostly to the Saudi state, which controls 98 per cent of Aramco’s shares.

Shell reported quarterly profits last week of £8.2billion, up from £3.6billion a year ago, alongside plans to buy back another £3.5billion of shares and hike its dividend by 15 per cent.

Analysts warned the figures would add to pressure on the Government to raise taxes on the industry to plug a £50billion black hole in public finances.

As chancellor, Prime Minister Rishi Sunak imposed a 25 per cent windfall tax on the North Sea and could now sanction an even higher levy when Jeremy Hunt delivers the Autumn Statement this month.

Analyst Jamie Maddock, of investment manager Quilter Cheviot, said: ‘As long as BP makes profits like this every quarter, the calls for them to give up more of their profits will only grow louder.’