A disturbing cellphone recording that was taken during Sunday’s George Floyd protests in Ohio shows a double amputee thrashing on the ground in agony after allegedly being knocked down and pepper-sprayed by police.

The incident took place during a clash between Columbus police officers and a crowd of people protesting police brutality.

According to multiple purported witnesses, the double amputee was peacefully protesting when officers possibly struck him and deployed pepper spray against him.

Video from Sunday’s protests in Columbus, Ohio, shows a double amputee laying on the sidewalk in agony with his prosthetic legs detached after an alleged clash with police 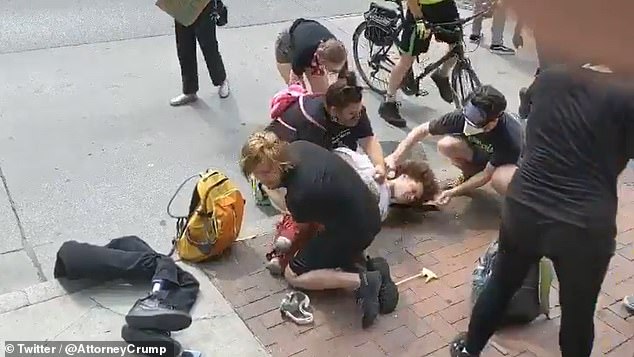 According to witness accounts, police officers seeking to disperse the crowd knocked down the disabled man and deployed pepper spray 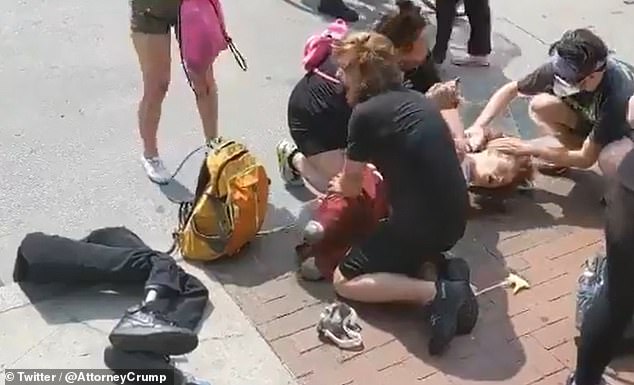 Officers then allegedly detached his legs and took them away, but other protesters intervened and retrieved them, getting maced in the process

They also allegedly disconnected and took away the young man’s prosthetic legs, forcing him to crawl away for help.

Video shot at the scene shows the unnamed man laying on the ground and being attended to be other protesters.

A man crouching next to him repeatedly screams ‘medic!’

The amputee’s prosthetic legs are seen resting on the sidewalk  a short distance away from him.

According to witness accounts, police officers had detached the legs from the disabled protester, leaving him helpless on the ground.

Other people in the crowd reportedly confronted the officers and demanded they return the prosthetics, but the cops allegedly refused. 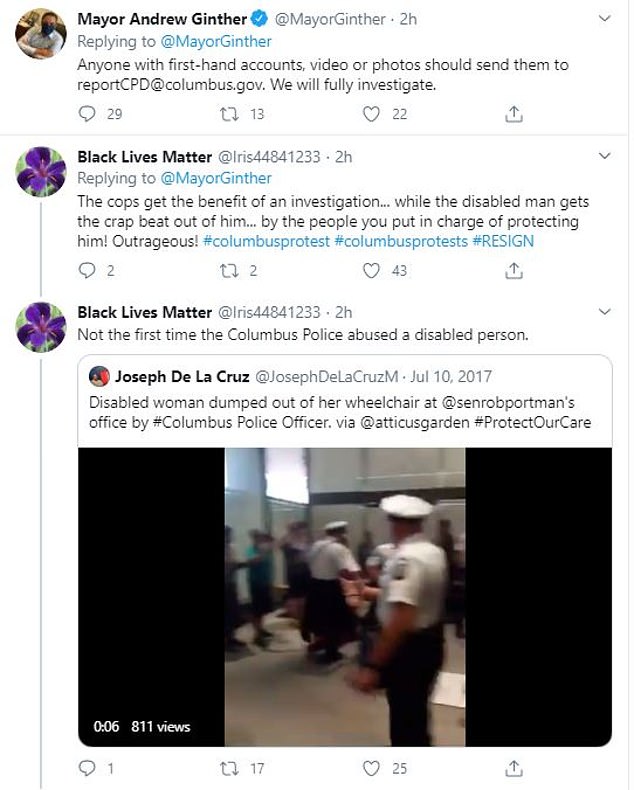 Then several protesters allegedly rushed the officers, getting pepper-sprayed in the process, and wrestled the legs back from them.

Laurenn McCubbin, a professor at Columbus College of Art & Design, wrote on Twitter that her husband was at the protest and ‘saw the cops hit & mace an unarmed kid and then STEAL HIS PROSTHETIC LEGS.’

She went on: ‘This kid, who was doing nothing but exercising his 1st amendment rights, was knocked over, maced, and had to flee from the cops ON HIS HANDS, to find medical help.

‘For everyone asking: the protesters begged the cops for the legs back, cops refused. Then a group rushed the cops (getting maced) and were able to grab the legs back & get them back to the kid.’

DailyMail.com on Monday reached out to the Columbus Police Department seeking comment on the alleged actions of the officers. 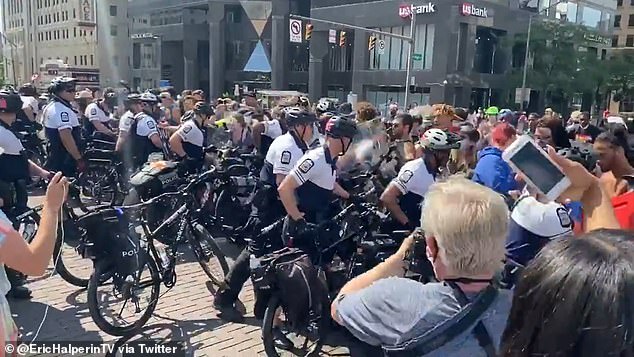 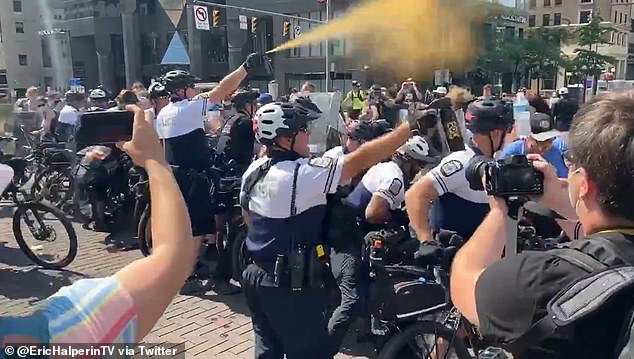 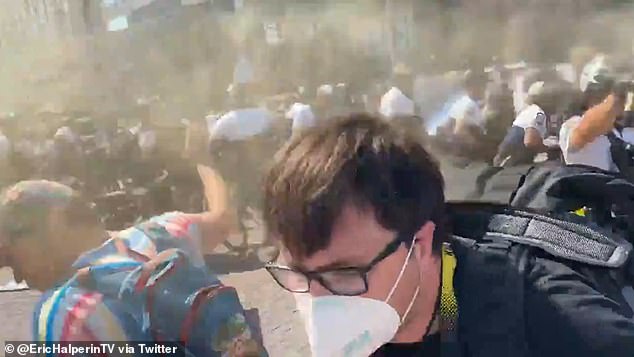 Additional video recordings from Sunday’s protests showed officers using their department-issued bicycles as battering rams to push the crowd back in a bid to clear the street.

Videos also showed officers deploying canisters of what appeared to be pepper spray to disperse the protesters, even though Columbus Mayor Andrew Ginther said last week the City Council banned the use of pepper spray and tear gas against ‘non-aggressive, non-violent crowds,’ reported Newsweek.

‘We have been clear about respecting and protecting peaceful protest. We also must keep city streets open to the public to travel and protect residents from lawlessness including the drag racing, fires and injuries in recent nights,’ the mayor said.

On Monday, Ginther addressed the incident involving the amputee in a tweet, writing: ‘I have seen the video and photo of the disabled man downtown last night. We are taking the matter very seriously and working diligently to find video, photos and additional information.’