The 72-year-old former party leader was on stage at a fringe event in a tent in Brighton where he and others were discussing how to take action to combat climate change.

But Piers, 74, began to heckle the stage while handling out leaflets saying ‘man made climate change does not exist’.

The event is part of the unofficial leftwing The World Transform event that runs alongside the conference.

He later said: ‘I attempted to ask a question, they grabbed me and they assaulted me and I shoved back at the person, the security guard, who assaulted me and sat down and refused to leave and stayed in the meeting.

‘They tried to remove me and they gave up.’

Piers is a well known climate sceptic and is also a prominent anti-vaxxer, who yesterday led an anti-jab demo outside the main conference venue on the seafront.

To make matters worse, he was sitting next to Mr Corbyn’s wife, Laura Alvarez, in the crowd prior to his ejection.

Piers is a well known climate sceptic and is also a prominent anti-vaxxer, who yesterday led an anti-jab demo outside the main conference venue on the seafront. 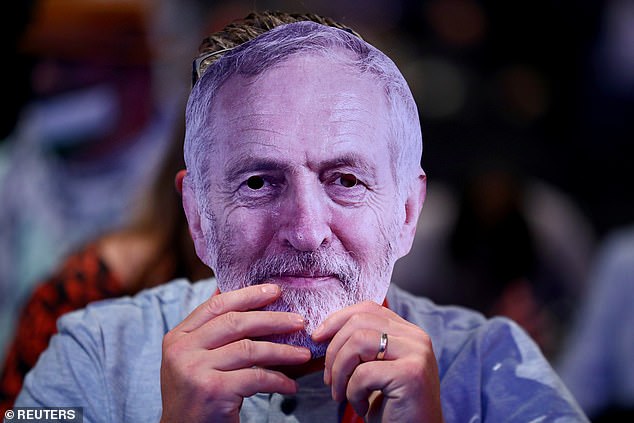 Jeremy, the 72-year-old former party leader was on stage at a fringe event in a tent in Brighton where he and others were discussing how to take action to combat climate change.

At the event with Labour left-wingers on Hove Lawns, Piers Corbyn’s crew was received with anger and repeatedly told to ‘shut up’ for shouting over MPs and other speakers with messages criticising coronavirus lockdowns.

A spokesman for The World Transformed said: ‘Piers Corbyn was admitted to TWT21 this afternoon as with all other ticket holders.

‘The climate crisis is real and TWT has a long history of working with climate activists.’

Reports suggested Piers intervened after the chairwoman of the event had asked for questions from women and people of colour only.

Those at the event said the request prompted shouting from a man in the audience, who was then removed, and Piers Corbyn then accused the event organisers of assault.

In video posted on Twitter the event chairwoman can be heard saying: ‘You need to ask yourself what level of entitlement you think you have over this space.

‘You need to sit down and show some goddamn respect.’

She added: ‘Alright, so we need to carry on comrades, because we have a massive task ahead of us.’ 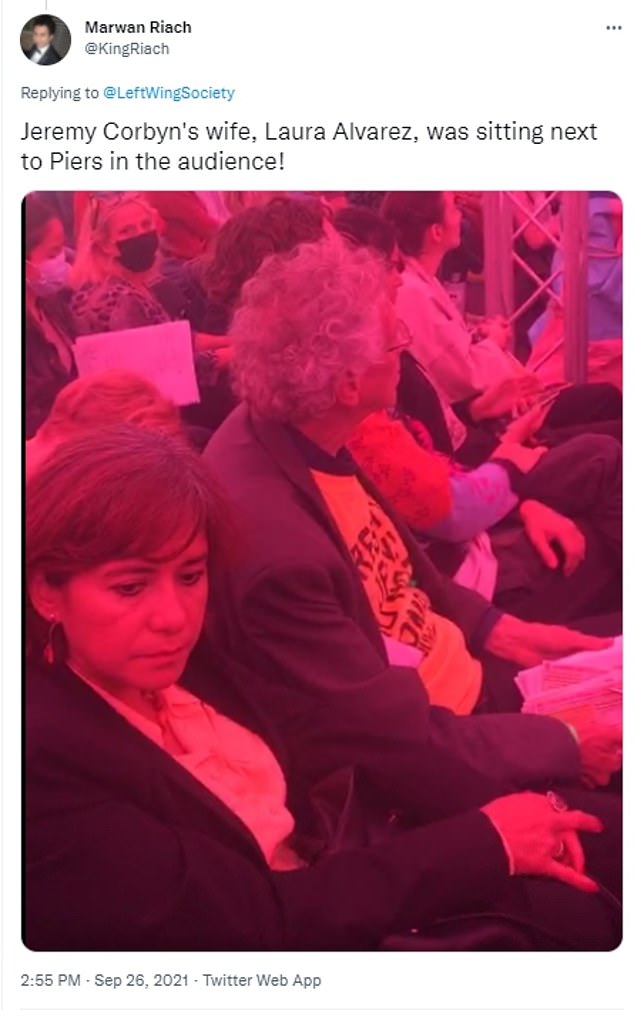 To make matters worse, Piers was sitting next to Mr Corbyn’s wife, Laura Alvarez, in the crowd prior to his ejection.

The former party leader is attending events at the fringe, which is not affiliated to the party, despite being stripped of the whip and forced to sit as an independent MP over anti-Semitism.

Piers, with his brother, grew up in a seven-bedroom manor house in Shropshire and was privately educated at Castle House prep school.

He is thought to be unmarried with no children, making money from weather prediction models while living in Southwark – his home of 40 years.

He served as a Labour councillor there between 1986 and 1990, but quit the party in 2002 over its housing policies.

As well as climate change denial he is also a prominent anti-vaxxer.

The notorious conspiracy theorist and his allies were spotted last week screaming at pupils at a school and trying to shove leaflets into their hands.

In separate shameful scenes, a group of protesters appeared outside Simon Langton Girls’ Grammar School in Canterbury after the government announced it would begin rolling out Covid-19 vaccines to children aged 12 to 15.

A year ago he was handed the first £10,000 fine in London for an illegal gathering after he organised a march claiming coronavirus is a hoax a year ago.

He led more than 10,000 anti-lockdown protesters who believe coronavirus is a hoax at the ‘Unite for Freedom’ rally in Trafalgar Square.

Elsewhere in the main conference hall, white men were urged not to ‘dominate’ speaking slots.

During a debate on housing and transport, the chairman of the session noted the people putting their hands up to contribute did ‘not reflect the diversity’ of those in the hall.

Mark Ferguson, a member of Labour’s National Executive Committee, told delegates in Brighton: ‘I am afraid, and I am not speaking from a position of particular strength here, there are too many white men putting their hands up.’