Ken Marsh, chairman of the Metropolitan Police Federation, said harsh restrictions will ‘put a lot of pressure’ on constables in London

Police say it will be ‘impossible’ to fine everyone caught leaving their homes without a reasonable excuse during the latest Covid lockdown with the Met already down 1,300 officers because of sickness and self-isolating.

Under the current restrictions, people can now only leave home for a few reasons including shopping for food or medicine and exercising once a day.

It does not include socialising or travelling on to a second home in another part of the country.

But police say they have an ‘impossible task’ in rooting out all offenders as many will just lie about what they are doing.

A police source said: ‘People will try to find loopholes in the Regulations and some will succeed’.

Fixed penalty notices of £200 will be issued for a first offence, with this doubling for further offences up to a maximum of £6,400.

Police chiefs have warned that enforcing the third national lockdown will increase the load on officers, whose numbers are already stretched because of the pandemic.

Ken Marsh, chairman of the Metropolitan Police Federation, said harsh restrictions will ‘put a lot of pressure’ on constables in London.

Mr Marsh revealed that some 1,300 Scotland Yard officers were off sick or self-isolating in the capital. 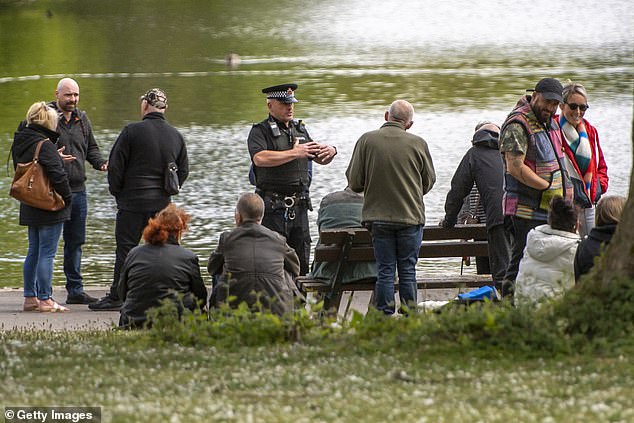 Meanwhile John Apter, chairman of the Police Federation of England and Wales, said that some forces in England had as much as 15 per cent of staff off.

Asked about how lockdown enforcement would affect officers, Mr Marsh said: ‘It will obviously create a lot of pressure on us because we have a lot more officers off this time than we did back in March.

‘Our numbers have rocketed in terms of officers with Covid and officers isolating and we envisage that getting worse.

‘So the pressure is on my colleagues who are still out there to maintain the same level that they did before.’

Last night Boris Johnson announced a seven-week lockdown to curb the surge of coronavirus being driven by a highly transmissible new variant of the disease.

England will revert from a tiered system of restrictions which has seen the country following different degrees of measures.

Mr Apter warned that blanket restrictions were clear to grasp, which means officers would be less lenient to flouters.

‘People should expect to see more enforcement as a consequence because there really are no excuses for not knowing the rules this time,’ he said.

He added: ‘The majority of the public will do what is expected of them, but I think there is a real issue over virus and lockdown fatigue.

‘There is a real frustration and the police often deal with the sharp end of that as people are angry when challenged.’

The Prime Minister concluded his gloomy televised address with a ray of hope, heralding the ‘biggest vaccination rollout in our history’.

Ministers hope that by mid-February, all care home residents, extremely vulnerable, over-75s and frontline health workers will have received the jab. 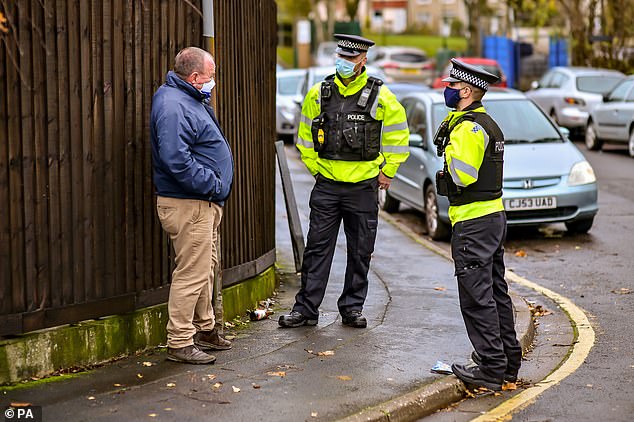 Police top brass are also calling for officers to get the vaccine.

Mr Marsh claimed: ‘It would appear that policing has been airbrushed out of any conversation in relation to protecting my colleagues, which I find quite incredible considering they are on the front line.

‘They are the one group of people other than the National Health Service that actually have to go to work and have to be out there with the public, every day, 24 hours a day.

‘It’s just amazing that no consideration whatsoever has been given to vaccinating police.’

Mr Apter has also called for officers to be prioritised after society’s most vulnerable groups and NHS workers have been given the jab.

He wrote in the Daily Telegraph: ‘Without the vaccine, there is a real danger that more officers will contract the virus.

‘As growing numbers self-isolate or report sick with the virus, then the police service begins to struggle to do what the public fully expects of it.

‘Some forces are already starting to report up to per cent of their officers off sick or self-isolating. This is getting worse and is simply not sustainable.’

Mr Apter, whose organisation represents 130,000 officers, said the ‘last thing the public want is to call 999 in their hour of need, only to find we are too short of officers to be able to respond’.