ODYSSEAN INVESTMENT TRUST: A special situations fund which invests in small listed UK companies that are leaders in their respective fields

Investment trust Odyssean is a special situations fund. It invests in small listed UK companies that are leaders in their respective fields, undervalued by the stock market and where change for the better is afoot. It then waits for the holding to realise its market potential before crystallising profits.

It’s an approach that managers Stuart Widdowson and Ed Wielechowski have got down to a fine art – and which is serving shareholders well.

While other funds that invest in UK smaller companies have suffered a challenging past year, Odyssean’s share price has held up well. Over the past one and three years, it has generated returns for investors of 2.7 per cent (losses) and 62 per cent (profits). To put these figures into perspective, the average UK smaller companies investment trust has registered losses of 14.4 per cent and gains of 26.6 per cent over the same time periods.

Investment analysts at Investec Bank like what Odyssean is doing. Little over a week ago, they described its shares as a ‘buy’, stating the trust could provide investors with all-important portfolio diversification because of its ‘absolute return mindset’.

The trust’s success is down to a number of factors. First, the fund managers have 40 years of investment experience behind them, which is reassuring to shareholders. In Widdowson’s case, he has spent 21 years investing in listed and unlisted UK smaller companies, so he knows a good business from a bad one.

Secondly, the two managers have ‘skin’ in the game. In other words, they are big shareholders in the trust, so have every incentive to make shrewd investments that keep driving up the fund’s share price. It currently stands at £1.62, compared with £1 at launch in May 2018.

Also, as managers, they are bold. The portfolio comprises just 15 companies with the biggest holding, chemicals business Elementis, representing 14 per cent of the trust’s assets. It means every stake contributes significantly to the fund’s overall performance, for better or worse.

It’s a risky approach, but there are risk breakers in place. When making key investment decisions, they use a panel of industry experts as a sounding board. It includes John Poulter, former chairman of marketing company 4imprint, and Lindsay Dibden, a founding partner of private equity firm HgCapital and a healthcare specialist. 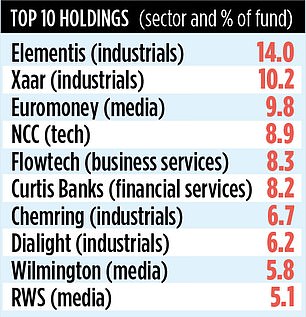 They are also not frightened to pull the plug on an investment if they think they have made a mistake. Widdowson says the trust made a ‘small’ investment in bank­note firm De La Rue early this year after the shares plunged in late January. But it has since sold at a small loss. ‘It wasn’t a clear market leader,’ he says, ‘and we made a mistake.’

Widdowson is happy to engage with the management of companies he buys into if he thinks it will help effect change that ultimately drives up the company’s share price. Which companies he talks to he’s not prepared to say, but the bigger the stake, the greater influence he can have as a shareholder. He says two new positions in ‘market leading’ companies – he won’t reveal which – have been made since March, and they are looking at two to three more.

‘As a fund manager, you can find value in volatile markets,’ he says. ‘Lots of the companies we are holding have cash, are not exposed to the consumer sector and do not do business in the UK. We like niche global market leaders.’

The trust’s stock market identification code is BFFK7H5 and its ticker is OIT. Including performance fees, annual charges are high at nearly 2 per cent.