A woman has honored her late golden retriever in a moving obituary that has captured the hearts of thousands on social media.

Sallie Gregory Hammett, 30, from Greenville, South Carolina, penned a touching tribute to her beloved dog Charlie after the seven-year-old lost his five-month battle with lymphoma earlier this month.

‘Charlie James Gregory-Hammett crossed the rainbow bridge Sunday, September 13 peacefully in the arms of his mom,’ she wrote at the start of the mock-newspaper obituary, which reflected on the life they shared together.

Moving tribute: Sallie Gregory Hammett, 30, from Greenville, South Carolina, penned an obituary for her beloved dog Charlie after the seven-year-old lost his battle with lymphoma 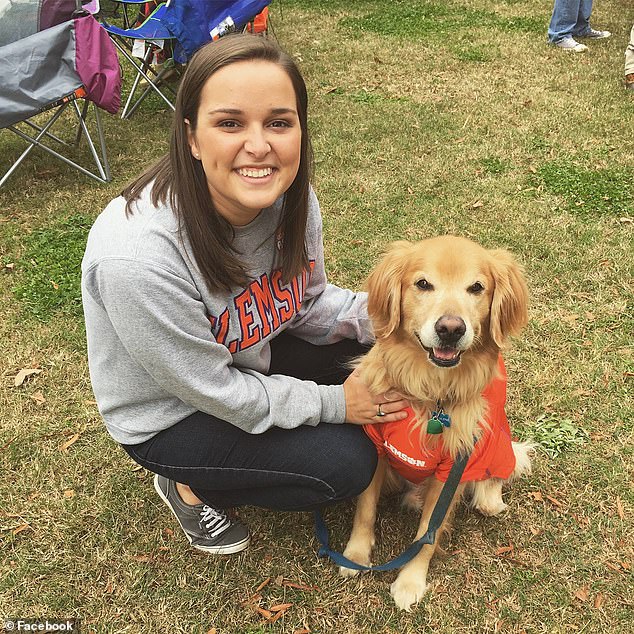 Love: When Sallie first adopted Charlie seven years ago, she was 23, single, and had just moved to a new city. He quickly became her closest companion

Sallie recalled the golden retriever’s ‘favorite activities,’ which included ‘walking, stick collecting, swimming smiling, and snoozing.’ She noted that he ‘loved everything life had to offer’ — except stairs.

More than anything else, Charlie loved his mom. He was always there to greet her with some kisses and a firm grip on her arm. He was her constant companion. There through heartache, moves, grief, and joy,’ she continued.

‘He was good at a lot of things, but he was best at unconditional love. He taught everyone he met about loving people, and always seeing the good in everyone.’

Sallie said Charlie spent his last days at his favorite place, the beach, where he relaxed in holes he dug himself and dove into the waves.

‘He will be forever missed and forever remembered, but he left behind his fierce love, which never wavered.’

In lieu of flowers, she asked other dog owners to give their ‘pups some extra love in honor of Charlie.’ 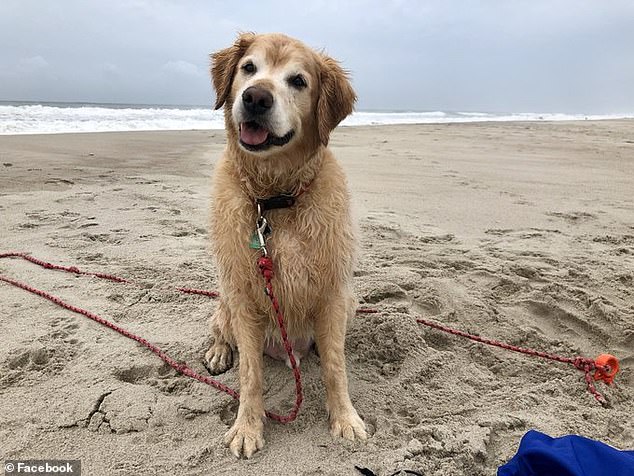 ‘Charlie loved the beach’: The obituary shared information about the dog’s favorite things in life, including car rides, bananas, and socks

When Sallie first adopted Charlie seven years ago, she was 23, single, and had just moved to a new city. He quickly became her closest companion.

‘I know it’s cliché but he was my best friend,’ she told HuffPost. ‘He went with me everywhere —work, hiking, trips to Home Depot. He was just a constant source of comfort and companionship and joy. Everyone that knew me knew Charlie and knew how much I loved him.’

She said she knew her husband, David Hammett, whom she married in May, was the one because he loved Charlie as much as she did.

Charlie’s obituary served as an outlet for her grief. She had wanted to have it published in her local newspaper, but it was too expensive. Instead, she decided to create a mock-newspaper obituary as a keepsake to memorialize him.

But after reading her heartfelt words, family and friends encouraged her to share the tribute online. A week after Charlie’s death, she tweeted a photo of the obituary, saying: ‘He was the best boy.’

The post has since received 10,000 retweets and 107,000 likes. More than 2,000 people have commented on the post, with many of them offering Sallie their condolences and praising the obituary she had penned for Charlie.

‘I’m so sorry. It really is heartbreaking!’ one person wrote. ‘They aren’t just dogs. They are our family. Non dog owners do not get it at all! I totally understand and feel awful for what ur going through. Again, I’m so sorry.’

‘I don’t have words enough to describe the feelings inside me after reading this beautiful obituary. Thanks a lot for making me cry,’ someone else commented. ‘It is nice to remember the four foot angels that dogs are…’

Charlie’s obituary also inspired other dog owners to share photos of their cherished pets. Those who had lost dogs themselves could relate to Sallie’s pain.

‘Great idea. So great. I lost my best friend to lymphoma as well this past July and not a day goes by where I don’t think of her and get sad she’s not with me any longer. Condolences to you and your fam,’ person wrote of his dog.

Sallie never expected the obituary to go viral, but she told HuffPost that reading people’s comments about their special dogs and the outpouring of love for Charlie has brought her peace.

‘It’s just been so comforting — it makes me feel less alone and just flooded with love,’ she said, adding: ‘And Charlie has been so celebrated! He was a special boy and it means the world to me.’