EXPRESS INFORMER > Health & Medicine > Obese men who lose weight – and keep it off – can increase their sperm count by 40%, study finds

Obese men who lose weight – and keep it off – can increase their sperm count by 40%, study finds

Being overweight or obese can damage someone’s fertility – but the damage is reversible by losing weight and keeping it off, a new study finds.

A Danish research team from the University of Copenhagen found that obese men who lose weight can boost sperm counts by 40 percent from where they were when they were unhealthily overweight.

If they keep the weight off, the higher sperm counts will be boosted as well, meaning that losses to fertility caused by being severely overweight are not permanent.

America is dealing with a crisis of obesity, and some experts believe that the number of overweight people in the country may be responsible for lower overall fertility and birth rates in the U.S. when compared to previous years.

Experts found that obese men can increase their sperm counts by around 40% if they lose weight, and keep it off long term (file photo)

‘This study shows that sperm concentration and sperm count were improved after a diet-induced weight loss in men with obesity,’ researchers wrote.

‘Our findings indicate that either or both liraglutide and exercise as weight maintenance strategies may be used to maintain the improvements in sperm concentration and count.’

Researchers, who published their findings last week in Human Reproduction, gathered data from 47 obese men for the study.

The men all had unhealthily high body mass index (BMI) figures – which is a metric that gauges someone’s weight relative to their height.

Each of the men were placed on a low calorie diet for eight weeks, losing an average of 36 pound per participant during the period.

Sperm counts were measured both before and after going through with the diet, and researchers found substantial increases in sperm count across the study period.

The men were then split into four groups. One group was advised to exercise 150 minutes a day. Another was given access to a diabetes drug that doctors prescribe to patients to assist in weight loss.

A third group was both advised to keep up exercise and given the drug. The fourth group was a control group that was given no assistance in keeping the weight off.

After about a year, half of the men had regained the lost weight, and in turn their sperm counts dropped.

The men who managed to keep off the weight kept their sperm counts up, though, meaning that the damage done to sperm levels by being obese can be permanently fixed by a health diet and exercise.

Neither the exercise nor the diabetes drug managed to improve sperm counts more effectively than weight loss did. 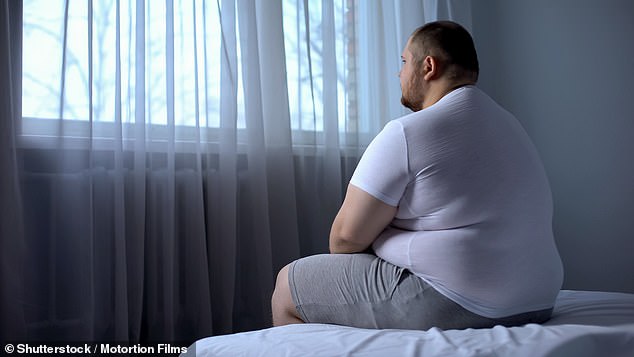 Sperm counts and overall fertility among U.S. men has fallen in recent decades, and it may be due to the nation’s obesity epidemic

‘Our study showed that exercise helps maintain weight loss, but that semen parameters were not further improved with exercise beyond the rather significant effect of the initial 8-week diet-induced weight loss in men with obesity,’ researchers wrote.

‘Similarly, for [the drug], we did not observe any additional effect beyond the initial improvements with diet-induced weight loss.’

Infertility, low sperm counts and decreased testosterone levels are believed to be problems in America at the moment and poor dieting a lifestyle choices may be to blame.

Experts told DailyMail.com last month that while concerns about infertility and low sperm counts are true, they can be managed with simple lifestyle changes.

America is currently undergoing an obesity crisis, with more than 40 percent of the population considered to be dangerously overweight.

This has led to an overall fall in male fertility, studies have found, and might even be a contributing factor in the declining U.S. birth rate.