Family members, foreign dignitaries and D.C. political elite poured into the Washington National Cathedral on Wednesday to mourn the loss of Madeleine Albright, the U.S.’s first female secretary of state.

Former President Bill Clinton  and Hillary Clinton, who also served as secretary of state, offered remarks, along with Albright’s three daughters, Alice, Anne and Katherine. The Clintons’ daughter Chelsea attended with them.

‘In the 20th century freedom had no greater champion than Madeleine Korbel Albright,’ Biden began his eulogy.

‘She could go toe to toe with the toughest dictators then turn around and literally teach a fellow ambassador how to do the Macarena on the floor of the UN Security Council. Don’t think I’m kidding, I’m not kidding,’ Biden quipped.

‘She thought it was too difficult to teach me how to dance. She was right,’ he added.

‘She made sure that young women knew they belonged in every single table, having to do with national security, without exception.’

Obama throws his arm around his former VP, President Biden, at the funeral for Madeleine Albright 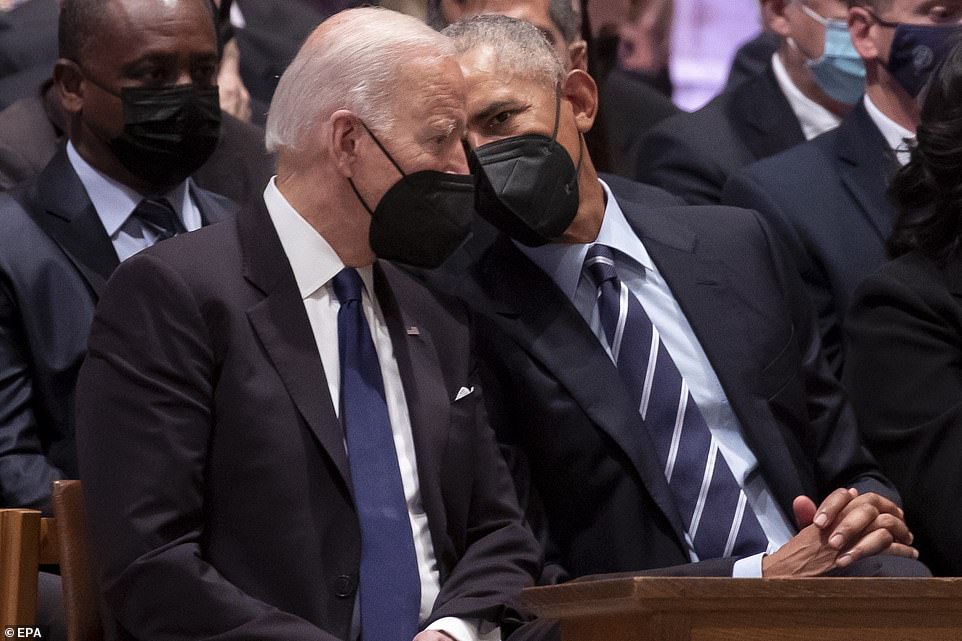 The former No. 1 and No. 2 in command exchanged hushed words at Albright’s service

Biden said that Albright kept his Foreign Affairs Committee ‘really busy’ in the 90s as she worked to halt genocide in the Balkans and prop up new democracies in eastern Europe and Colombia.

‘She always on top of the latest developments, always speaking out for democracy and always the first to sound the alarm about fascism,’ Biden said. ‘It was not lost on me that Madeleine was a big part of the reason NATO was still strong and galvanized as it is today.’

Hillary Clinton, in her own remarks, called for the U.S. to fight ‘dictators and demagogues’ in its own Capitol, in the spirit of Albright.

‘We must heed the wisdom of her life and the cause of her public service. Stand up to dictators and demagogues, from the battlefields of Ukraine to the halls of our own Capitol. Defend democracy at home just as vigorously as we do abroad,’ she said.

World leaders have traveled across the globe to pay their respects, including the presidents of Georgia and Kosovo and senior officials from Colombia, Bosnia and the Czech Republic.

Born Marie Jana Korbelova in Prague on May 15, 1937, her family fled in 1939 to London when Germany occupied Czechoslovakia to escape Nazis and communists.

She attended school in Switzerland at age 10 and adopted the name Madeleine.

She was raised a Roman Catholic but after she became secretary of state, the Washington Post dug up documentation showing that her family was Jewish and relatives, including three grandparents, died in the Holocaust. 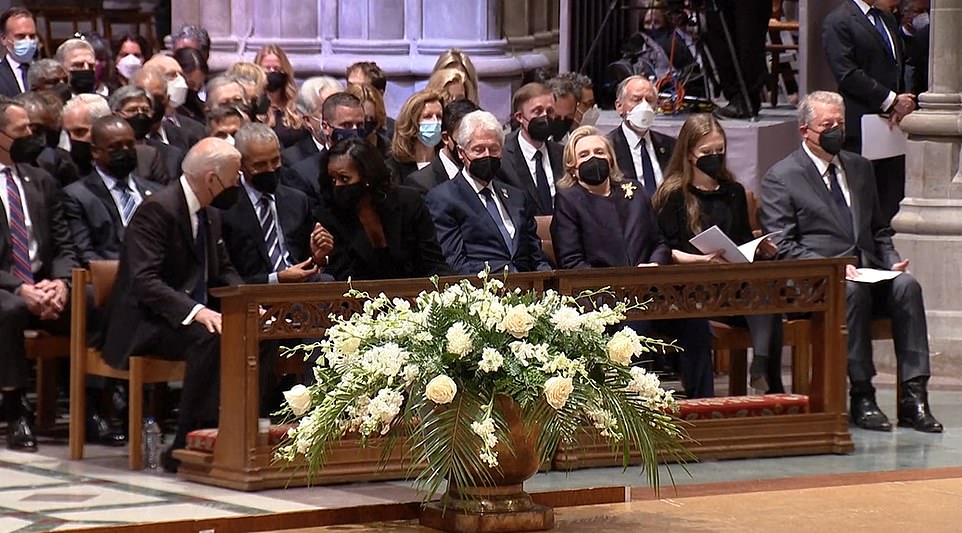 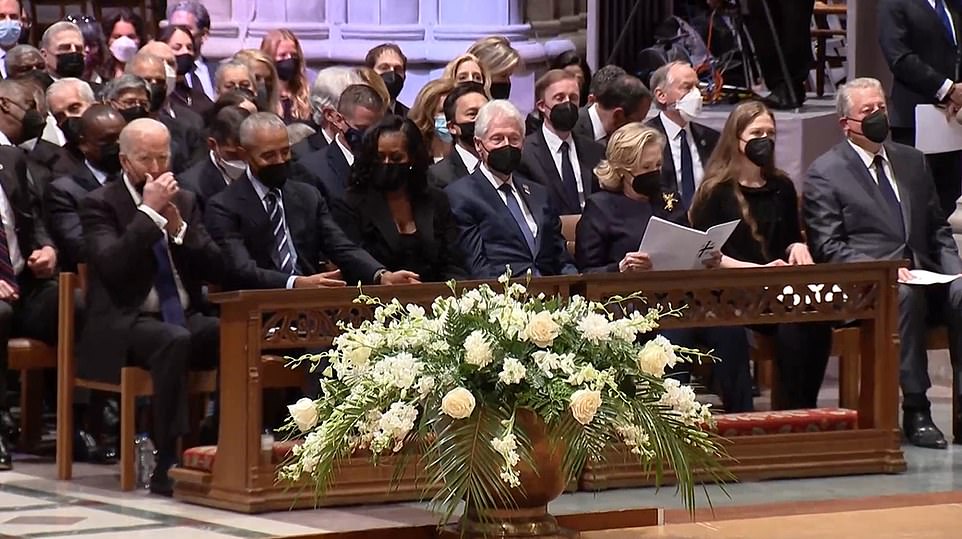 Biden pulls his mask down as Barack Obama looks to be explaining something and Hillary reads the program as she sits next to daughter Chelsea, with Al Gore on the other side 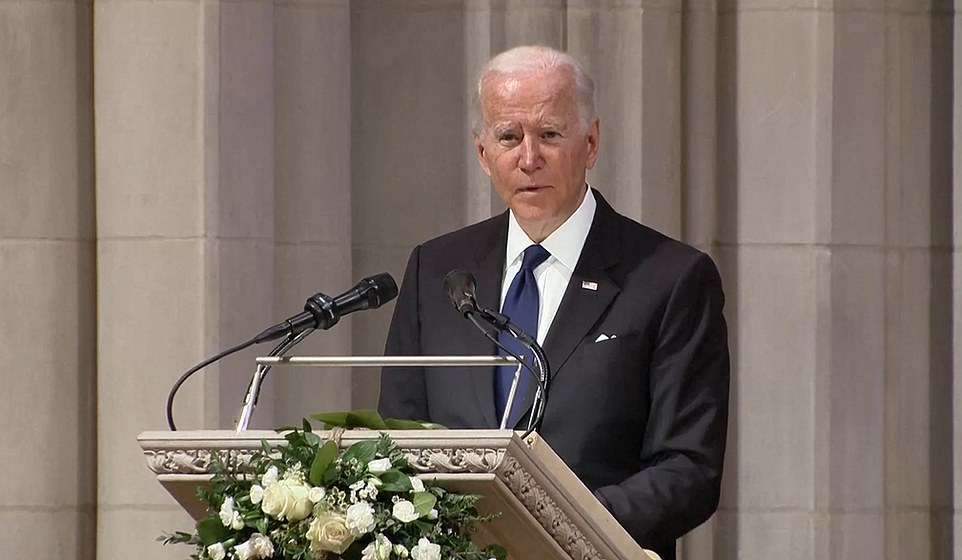 ‘She could go toe to toe with the toughest dictators then turn around and literally teach a fellow ambassador how to do the Macarena on the floor of the UN Security Council. Don’t think I’m kidding, I’m not kidding,’ Biden quipped 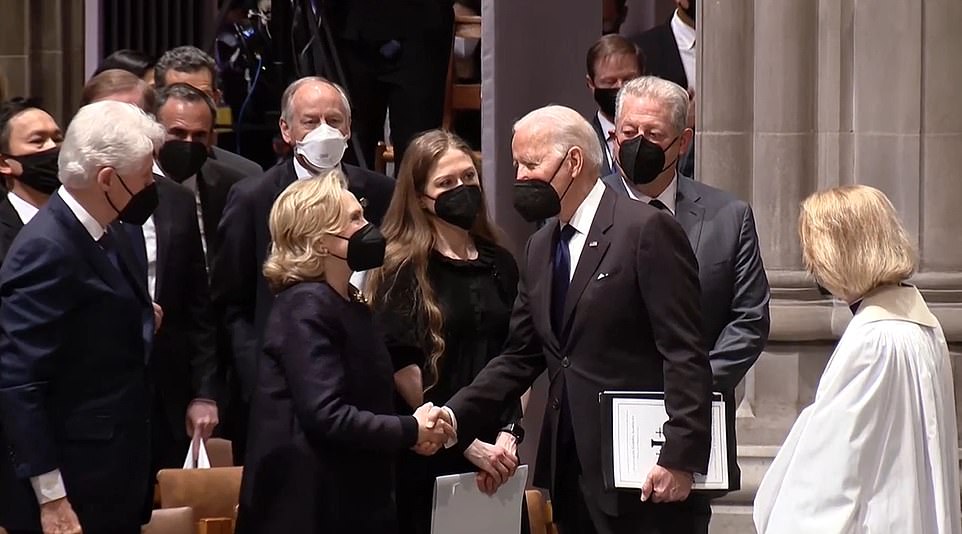 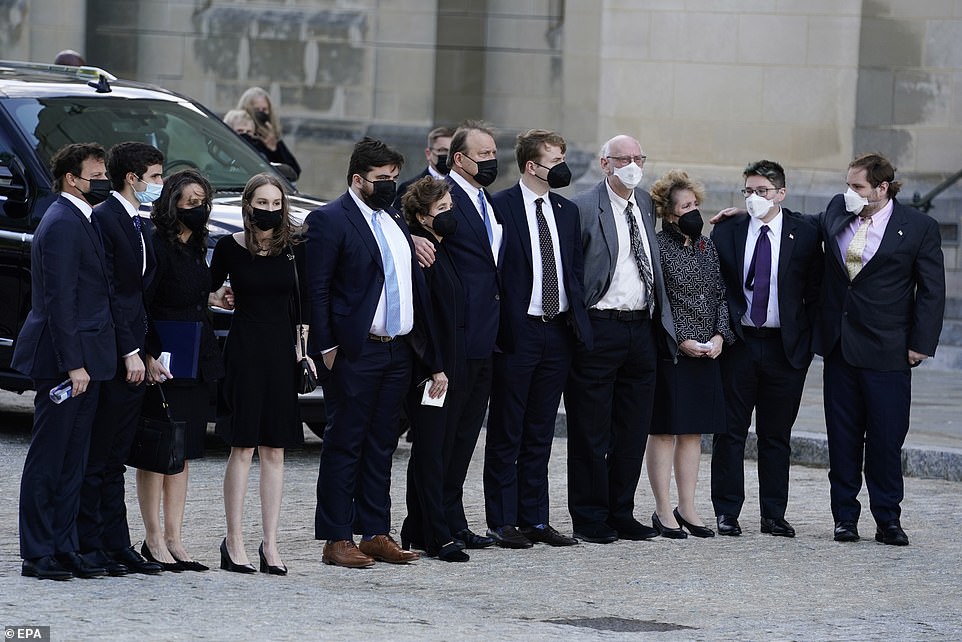 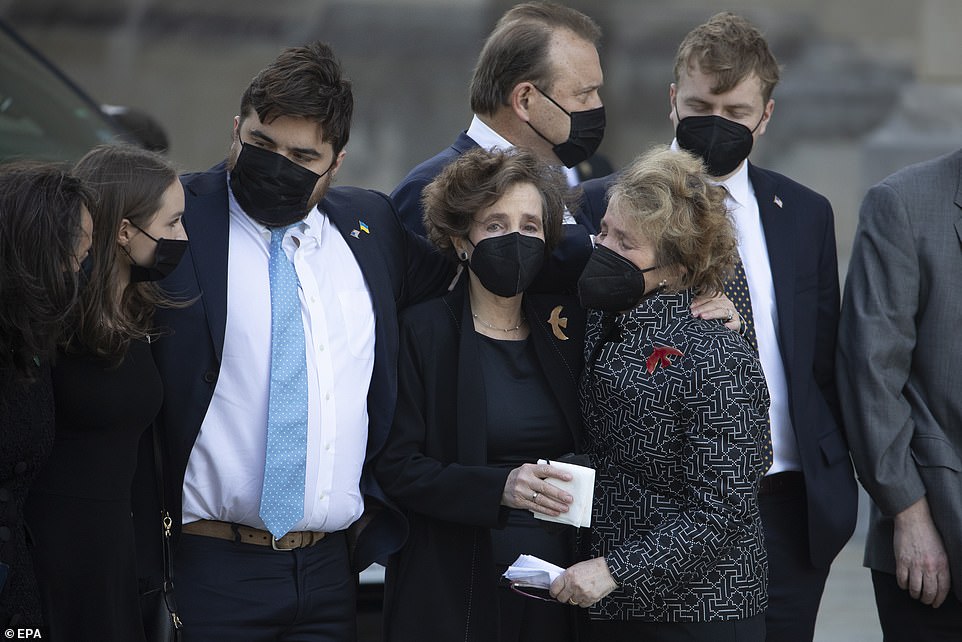 Albright’s family members console each other 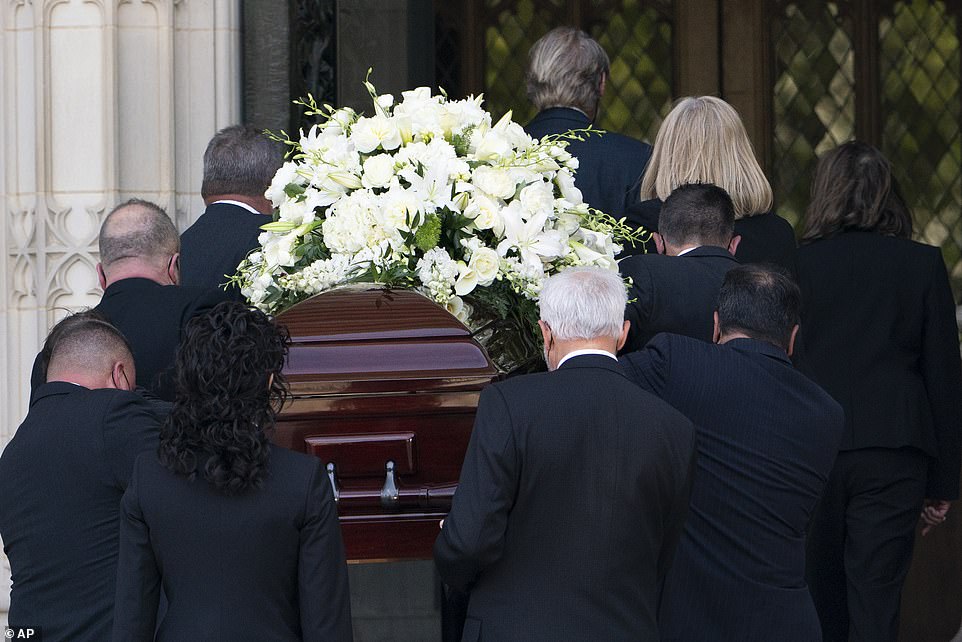 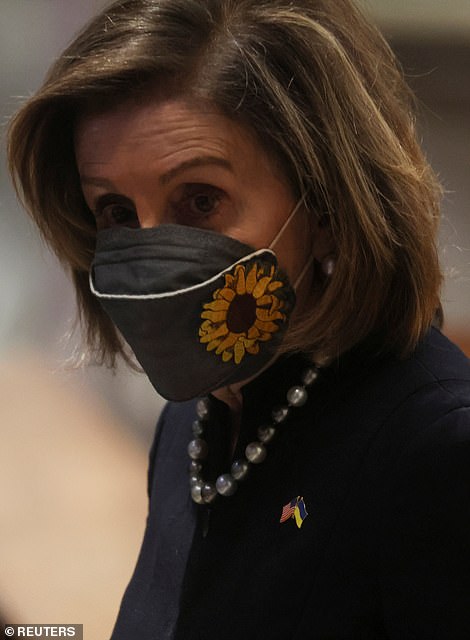 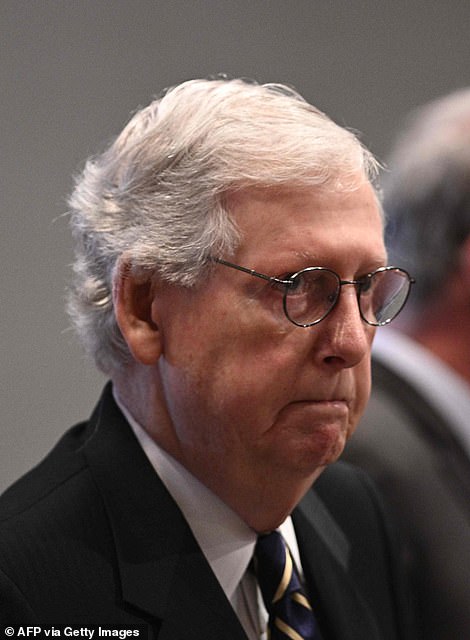 Nancy Pelosi and Mitch McConnell arrive at the funeral 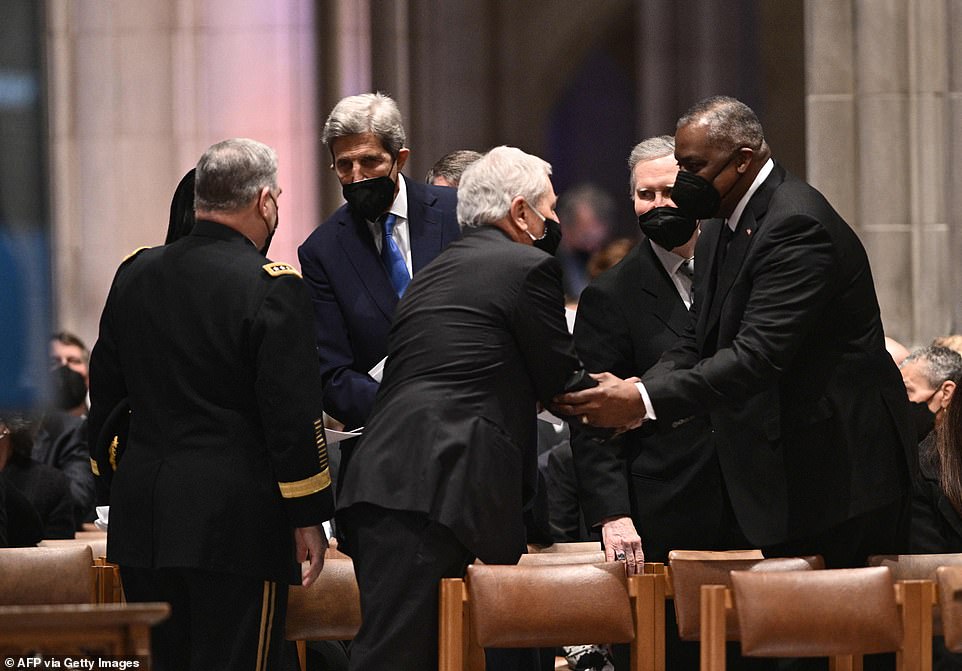 Her parents likely converted to Catholicism from Judaism to avoid persecution as Nazism gained strength in Europe, the paper reported.

After the war, the family left London and returned to Czechoslovakia, then in the throes of a communist takeover.

Her father, a diplomat and academic who opposed communism, moved the family to the United States where he taught international studies at the University of Denver.

One of his favorite students was Condoleezza Rice, who would become the second female secretary of State in 2005 under Bush 43.

‘It is quite remarkable that this Czech émigré professor has trained two secretaries of state,’ Albright told the New York Times in 2006.

Albright attended Wellesley College in Massachusetts, and got a doctorate from Columbia University.

She became fluent or close to it in six languages including Czech, French, Polish and Russian as well as English.

In 1959, she married newspaper heir Joseph Medill Patterson Albright, whom she met while working at the Denver Post, and they had three daughters.

Clinton selected her as secretary of state in 1996 for his second term- she had been his United Nations ambassador before that. 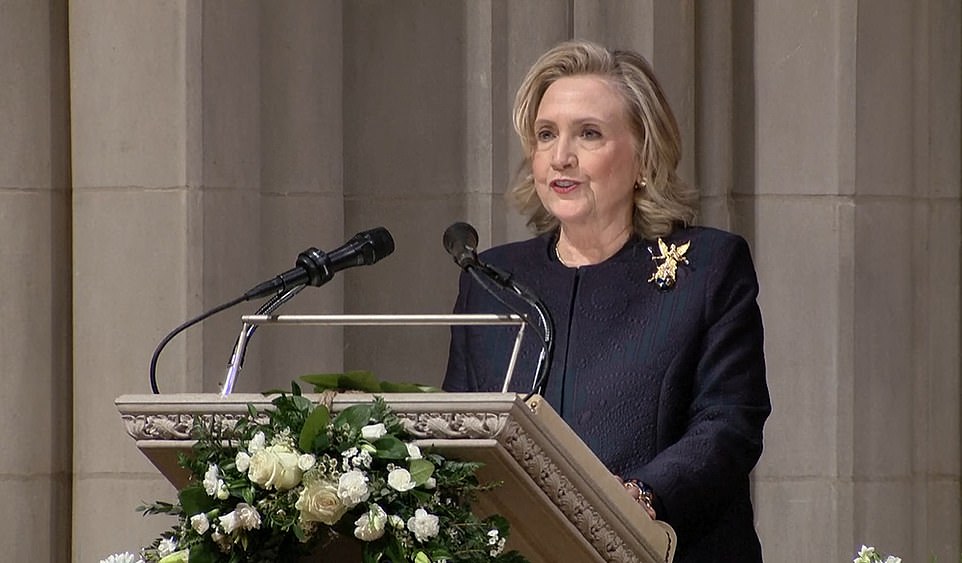 Hillary Clinton delivers remarks on the passing of Albright 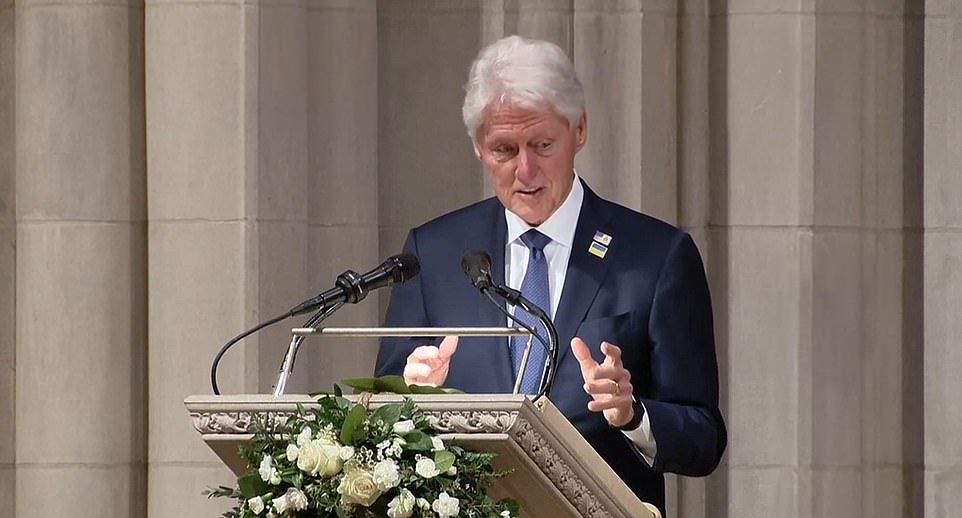 Bill Clinton said that after Albright’s first four years in the administration, ‘she continued to defy expectations, and sometimes raise eyebrows’

Clinton said that after Albright’s first four years in the administration, ‘she continued to defy expectations, and sometimes raise eyebrows.’

‘She made us laugh she made us cry some of us she made mad,’ the former president said. ‘Today we see in Ukraine all too tragically what Madeleine always knew that the advance of freedom is not are inevitable or permanent.’

He said he spoke to Albright about two weeks before her death. Clinton said that when he asked Albright about her health, she said, ‘Let’s don’t waste any time on that. The only thing that really matters is what kind of world we’re going to leave to our grandchildren.’

‘I’ll never forget that conversation as long as I went, it was so perfectly Madeleine.’

‘In her last memoir, she shared the urgency that she always felt she wrote, There is no shortage of worthwhile work to be done, and no surplus of seasons in which to do it,’ Hillary Clinton added in her own address. ‘That is the wisdom of a woman who learned too early in life that life is fragile. Freedom can’t be taken for granted.’

‘I was privileged to know Madeline through many seasons of our lives, and she was always in a hurry to do good.’

‘A dozen times a day she would ask her team what’s next? Turning her boundless energy and intellect to yet another crucial global challenge. She was irrepressible, wickedly funny, very stylish, and always ready for a laugh. She brought the same energy to her friendships as she did to her diplomacy,’ Clinton added. ‘Yes, it’s true. She did teach the foreign minister of Botswana, the Macarena at a UN Security Council meeting and snuck off early from an official event to do the tango in Buenos Aires.’

After assuming the role of secretary of state in 1997, Albright quickly made a name for herself as the Clinton administration’s chief hawk. ‘My mindset is Munich,’ she said frequently, referring to the German city where the Western allies abandoned her homeland to the Nazis.

She championed the 78-day bombing of Serbian-led Yugoslavia over the persecution of Kosovo Albanians, which was dubbed ‘Madeleine’s War.’

Albright was also an architect behind the Clinton administration’s expansion of NATO into former Soviet territory, almost up to Russia’s borders, a move which some have argued spurred a feeling that the West was out to get Russia, a line Vladimir Putin has used to drum up support at home for his attack on Ukraine.

She also presided over the post-Gulf War sanctions on Iraq, on paper to compel Iraq to withdraw from Kuwait in the early 2000s. The maximum pressure campaign inflicted damage on Iraq in hopes of destabilizing Saddam Hussein’s regime.

Albright drew controversy when in a 1996 interview with Leslie Stahl, she was asked: ‘We have heard that half a million children have died. I mean, that’s more children than died in Hiroshima. And, you know, is the price worth it?’

Albright’s daughter Alice described her as a devoted mother who called every day, sometimes twice.

‘She was an optimist who worries a lot and we can all attest to her worries. She was incredibly protective,’ Alice Albright said.

Alice said that her mother would call her every day at exactly 6:35 p.m., and ask, ‘How are the boys? How was work? When is your next trip? Are you going running tonight? Don’t forget it’s dark out.’

She told of how her mother taught right up until the end of last year when her health took a turn for the worst. Alice said the dedicated professor even brought a binder full of students’ papers to the hospital with her, reading and grading them from her hospital bed. 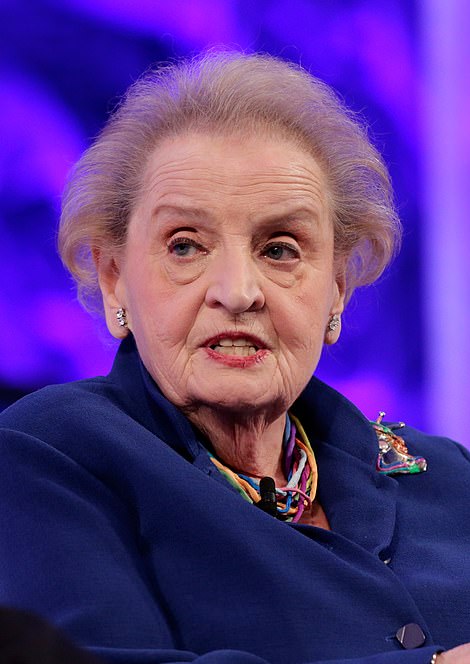 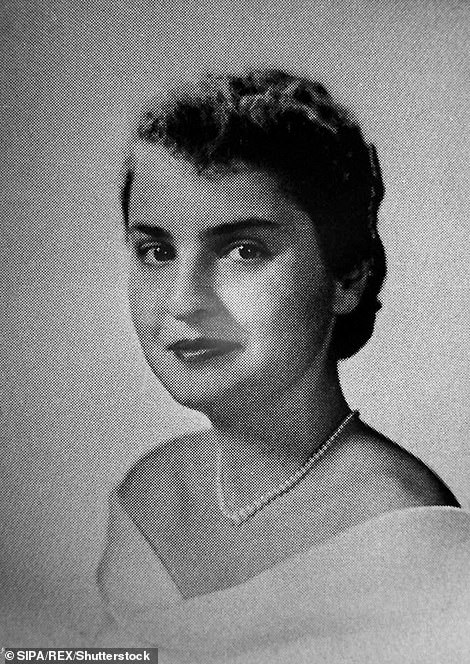 Madeleine Albright photographed in 2019 and in 1945 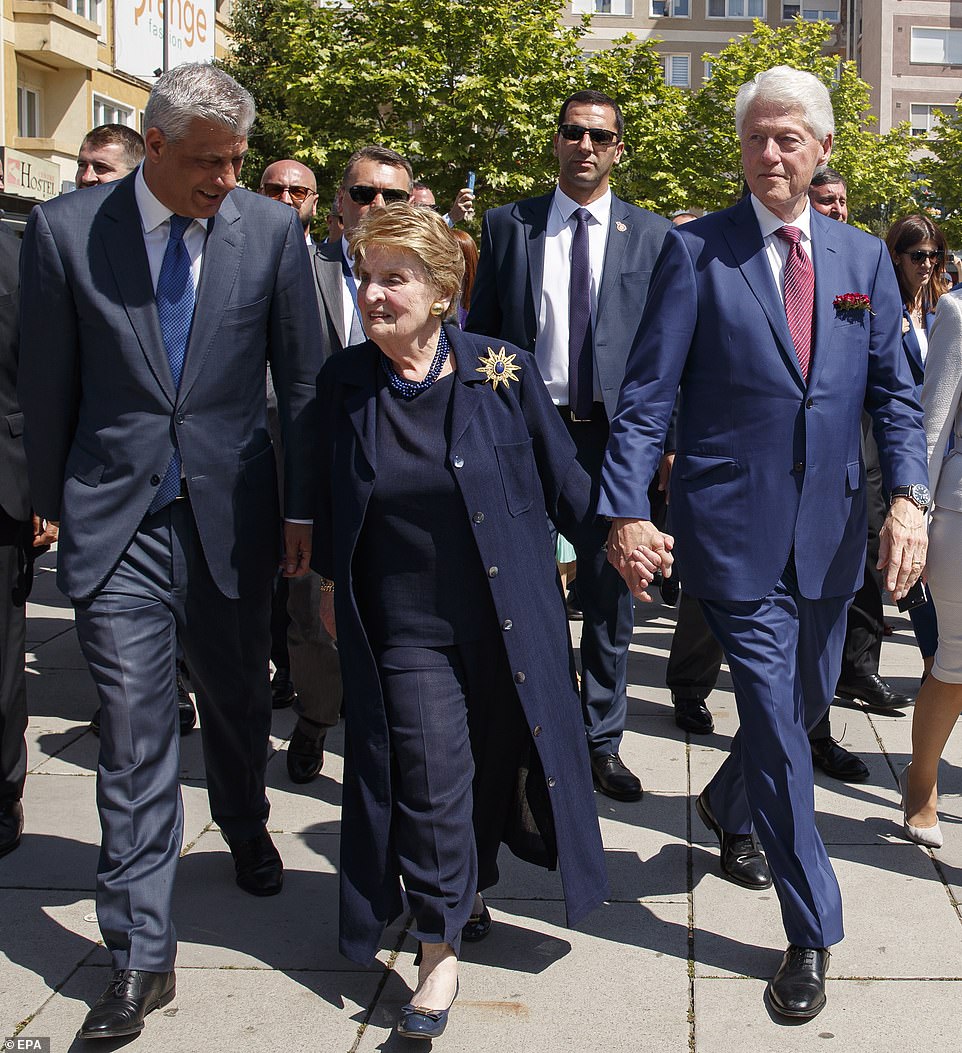 President of the Republic of Kosovo Hashim Thaci, left, together with Former US Secretary of State Madeleine Albright, center and Former US president Bill Clinton walk through the main square of Pristina during the ceremony marking the 20th anniversary of ending the war in Pristina, Kosovo, in June 2019 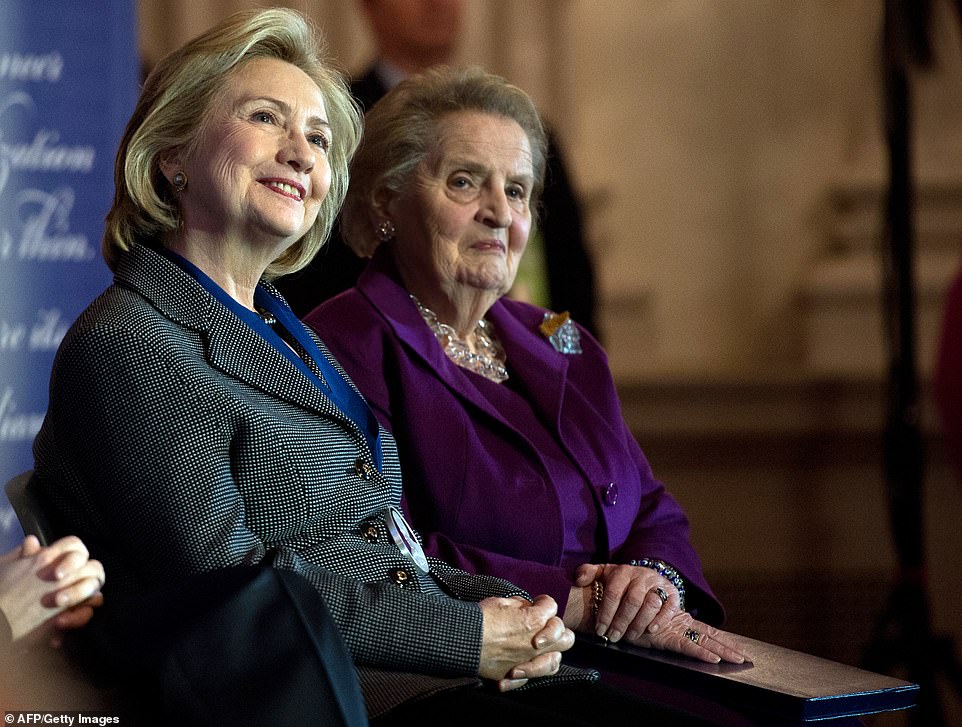 Albright replied ‘I think this is a very hard choice, but the price, we think the price is worth it.’

The secretary later said that the 500,000 figure was highly inaccurate, but apologized. ‘I had fallen into a trap and said something I did not mean,’ she wrote in her 2006 book regretted coming ‘across as cold-blooded and cruel.’

During Hillary Clinton’s presidential campaign in 2016, Albright endorsed her introducing her with the phrase ‘There’s a special place in hell for women who don’t help each other!’

She later apologized for that remark too, after critics said it seemed like she was saying women who don’t support Clinton belong in hell.

For years after leaving the Clinton administration, Albright remained a fixture in Washington – attending galas like the White House Correspondents’ Dinner, book talks and other events. In 2012, she even took over the drum set at a Kennedy Center’s Thelonious Monk jazz competition.

She received the Presidential Medal of Freedom from former President Barack Obama in 2012.

In 2009, she released the book, Read My Pins: Stories from a Diplomat’s Jewel Box, which detailed the ornate pins she wore with her outfits – and what they were meant to convey.

One favorite was a snake brooch, a reference to Iraqi leader Saddam Hussein calling her an ‘unparalleled serpent.’

One of her last public appearances was as a speaker at former Secretary of State Colin Powell’s funeral in October.