Former President Barack Obama, still a hugely popular figure among Democrats, fronted a new video campaign Tuesday to get out the vote for Joe Biden.

In videos tailored for states vital to Biden’s challenge against President Donald Trump, Obama urges voters to get organized ahead of an election disrupted by COVID-19, increased use of mail-in ballots, and Trump’s unprecedented – and debunked – claims of a rigged contest.

En route to Florida Tuesday, Biden also said Obama would soon be hitting the campaign trail too. ‘He’s doing enough for our campaign. He’ll be out on the trail,’ Biden told reporters.

On Tuesday, President Barack Obama, a ‘voter enthusiast,’ debuted a new series of videos aimed at swing state voters getting them to come out for his former vice president, Democratic nominee Joe Biden 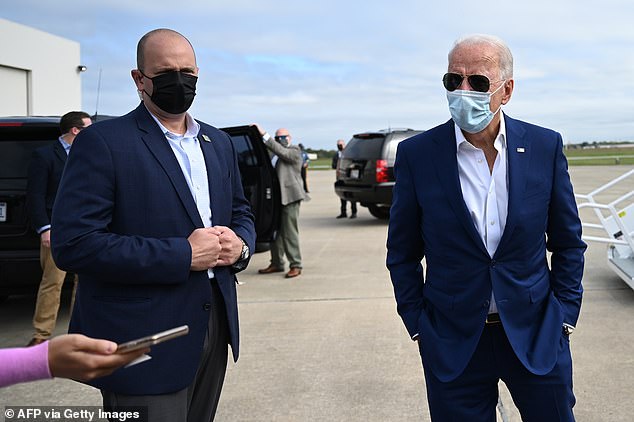 En route to Florida Tuesday, Joe Biden told reporters that President Barack Obama would be on the campaign trail for him soon

In the videos Obama says, ‘So much is at stake in this election.’

‘History shows that the easiest way to make sure that you and your friends vote is to make a plan. And when it comes to voting this year, having a plan has never been more important.’

Twenty-four states are individually targeted in the videos, including battlegrounds Wisconsin, Pennsylvania, Ohio and Florida.

The message delivered by America’s first Black president – who chose Biden as his vice president – is less ideological than practical, listing voting options and sending supporters to the Democrats’ IWillVote.com site.

The choice of a high-powered messenger reflects the party’s apprehension that despite Biden’s solid lead over Trump in opinion polls, turnout will be a disappointment.

On the Republican side, Trump has focused on energizing his considerable base which, although only a minority of the population, is expected to vote enthusiastically on November 3.

Obama remains a potent force, even if he now works mostly off-stage.

His wife Michelle Obama has her own powerful following and has likewise come in to support Biden’s bid at key moments, including at the Democratic party convention.